One of the largest religious message boards on the social-media website Reddit is simply called “Debate an Atheist.” It’s filled with exactly the kind of content you’d expect. Some conversations quickly devolve into name-calling and petty insults. Others are incredibly philosophical, showing a strong grasp of epistemology and teleology. In total, the subreddit has more than 72,000 members, and undoubtedly many more who stand on the sidelines and watch the debates unfurl.

If evangelical Christians take the Great Commission seriously, is debating an atheist a good use of their time, energy, and effort? In my new book, The Nones: Where They Came From, Who They Are, and Where They Are Going, I provide empirical evidence that debating atheists has a very low return on investment. If Christians want to bring people back into the fold of a church community, they should try a different strategy.

Let’s start by talking about who the nones actually are. When the term is used during a sermon or a Bible study, it seems that most people’s minds automatically turn to atheists like Richard Dawkins or Sam Harris. However, atheists represent a relatively small portion of the American populace. In 2019, they were 6.6 percent of the population, with agnostics adding another 6.2 percent. The group that makes up the largest portion of the nones is one most people have never heard of: “nothing in particular.”

When presented with options to describe their religious affiliation by a survey researcher, these people didn’t choose Protestant, Buddhist, or even atheist. They shrugged their shoulders and chose “none of the above.”

In 2008, they were 14.4 percent of the sample; by 2019, they had jumped to 21.5 percent, an increase of more than seven percentage points. That increase alone is larger than the entire share of atheists in 2019. And there’s ample reason to believe this group is willing to at least have a conversation about the value of religious faith. 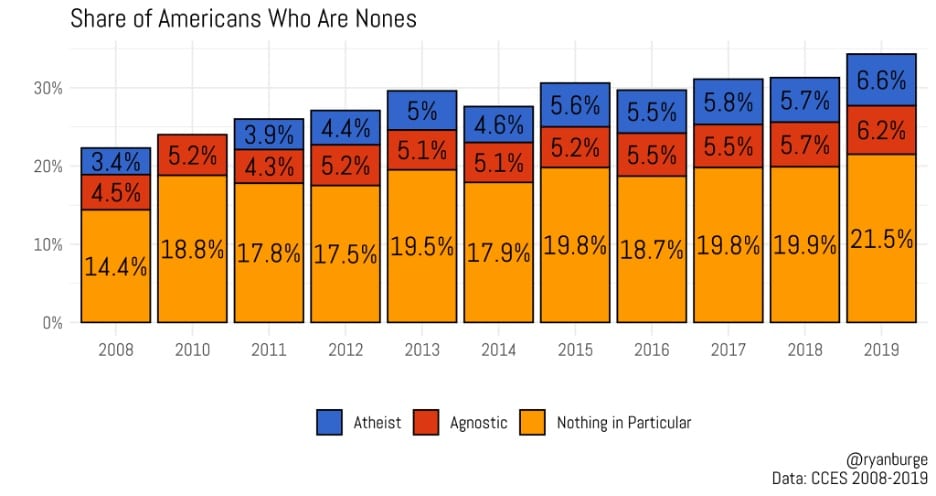 Church attendance is a reasonable proxy for how closed off an individual is to the possibility of religion. Among the nones, there’s a clear divergence between atheists, agnostics, and nothing-in-particulars.

It shouldn’t come as a surprise that a huge share of atheists never step foot inside a church. About nine in 10 indicate that they never attend services, and another 8 percent describe their attendance as “seldom.” That leaves less than 3 percent who attend a religious service at least once a year. Agnostics aren’t far behind, with 94 percent indicating they attend “never” or “seldom.”

But nothing-in-particulars are a different story. Just 57 percent report no church attendance, and another quarter indicate that they “seldom” attend services. That leaves about 18 percent who attend yearly or more, which is six times the rate of atheists and three times the rate of agnostics. Nothing-in-particulars are clearly less allergic to a religious experience than the other nones.

And there’s one other question on which nothing in particulars look different from their atheist and agnostic cousins: how important is religion in your life?

How Important Is Religion?

Nothing-in-particulars look like they’re operating in an entirely different world than other types of nones. Just 38 percent say that religion has no importance in their lives, and only a quarter say that it is “not too important.”

A mere 1.8 percent of atheists say religion is “somewhat” or “very” important. Agnostics score a few points better on this metric (6 percent). Among nothing-in-particulars, nearly 38 percent place themselves in these two categories. Recall that nothing-in-particulars make up more than 20 percent of the current adult population, which means the share of this group that indicates religion is at least “somewhat” important is larger than the share of all the atheists or agnostics in the United States.

Obviously, no one is irredeemable, and evangelicals who embrace the Great Commission should “always being prepared to make a defense to anyone who asks you for a reason for the hope that is in you” (1 Pet. 3:15). But it also makes sense to devote attention to an audience that is more receptive to the message. While debating an atheist might be an intellectually stimulating exercise, there’s little evidence that atheists are receptive to changing their views of God.

However, there is a larger portion of the population that’s much more open to hearing about the good news of Jesus Christ. Nothing-in-particulars are about the same size as white Catholics in the United States, and nearly as large as evangelicals of all races. They are not closed off to religion, and are much more likely to return to a Christian tradition than either atheists or agnostics are.

Just as companies perform market research to determine how to create products and advertise them to the public, churches would do well to understand the groups they are trying to reach. Nothing-in-particulars seem like an eager and accessible audience.