What effect will the coronavirus pandemic have on the future of American religion? Our country has not seen such a radical and abrupt shift in behavior in the last hundred years. Suddenly almost all churches, mosques, and synagogues in the U.S. suspended congregational meetings.

There’s ample reason to believe this may have had a galvanizing effect on American religion. There’s no doubt that many used the first few weeks of lockdown to seriously contemplate their happiness, their faith, and how they want to live their lives. Maybe some recognized a spiritual void and yearned to return to worship. On the other hand, others may have stopped attending church for the first time in their lives and found that they didn’t miss having a church home.

While it’s still far too early to declare whether the pandemic led to a widespread defection from America’s houses of worship, initial survey results don’t seem to show a dramatic rise in the share of people who declare no religious affiliation (“nones”). Compiling data from the Cooperative Election Study, the Pew Research Center, the Nationscape survey, Public Religion Research Institute, and the General Social Survey offers us the most comprehensive portrait of the rise in disaffiliation during the last several years. 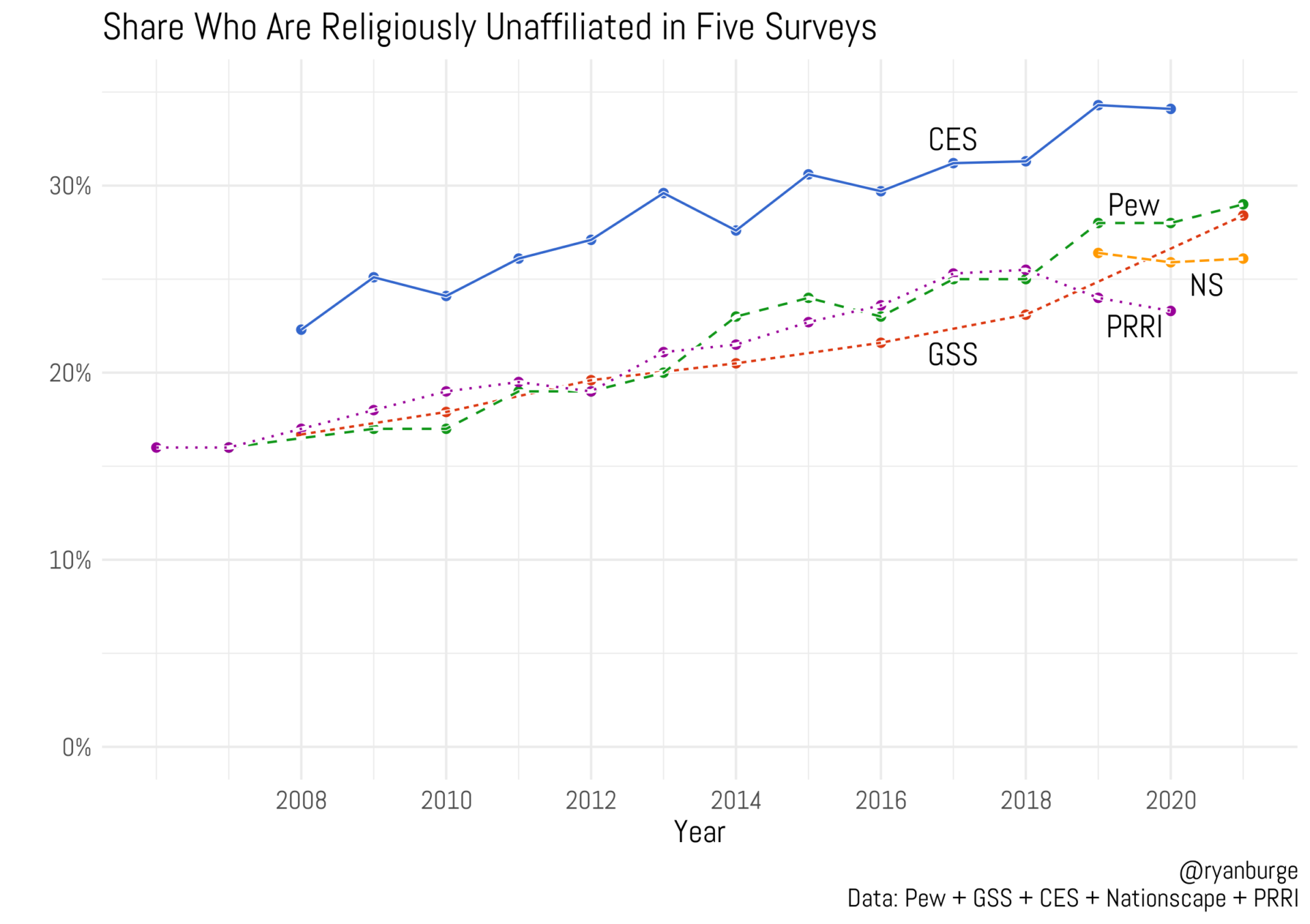 The Cooperative Election Study offers the highest estimate of the nones at 34 percent in 2020. Other surveys peg that number much lower. For instance, Pew indicates that 29 percent of Americans have no religious affiliation—the General Social Survey has it a bit lower at 28 percent. The Nationscape survey reported the number at 26 percent in January of 2021. In each of those four surveys, the trend line indicates either a continuous rise in the nones, or a leveling off in the last few years. Only one survey from PRRI reports a decline. PRRI’s data says that in 2017, 25 percent of Americans were nones and in 2020 that dropped by two percentage points.

When looked at broadly, it’s hard to find any real evidence that the pandemic led to any sort of widespread exodus from American religion. Only the General Social Survey showed a marked increase, and that’s likely more about a change in survey methodology than any real shift in the composition of American religion.

It’s hard to find any real evidence that the pandemic led to any sort of widespread exodus from American religion.

But I can test that assumption with a lot more granularity using the Nationscape survey. What is amazing about Nationscape is that it wasn’t all collected in a short window. Instead, the data was collected through a series of weekly surveys that ran from July 2019 through the first week of January 2021. Each survey wave represented about 6,000 respondents. This means it’s possible to track social change with specificity both before and after the COVID-19 lockdowns. 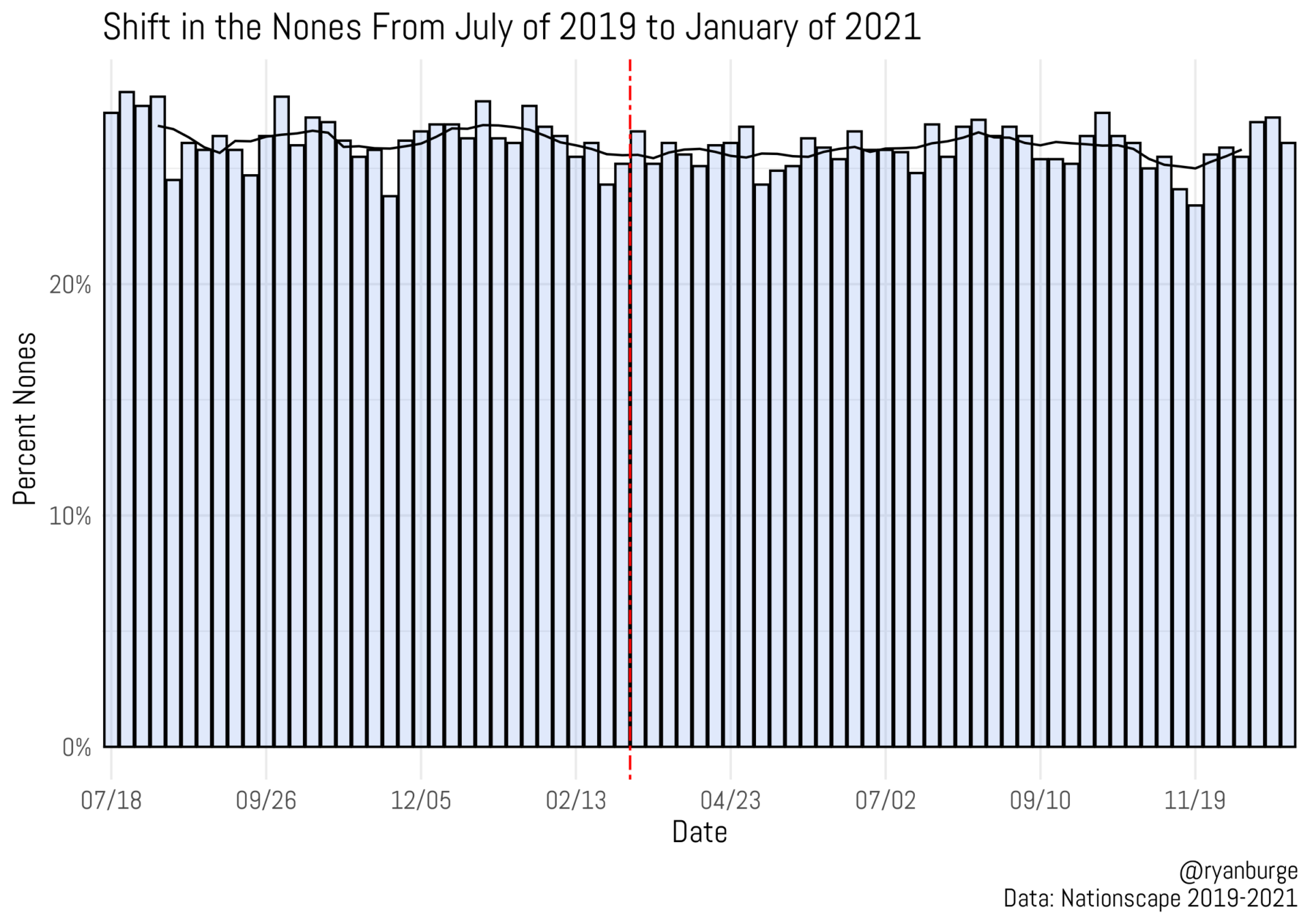 When each week’s nones are calculated, there is one clear conclusion: things didn’t shift that much from the summer of 2019 through the beginning of 2021. The red dashed line in the graph denotes when most of America went on lockdown in March 2020. The trend line is a rolling average of the nones for each week during the entire period. If anything, there’s small evidence that the share of Americans who said that they were atheists, agnostics, or nothing in particular may have dropped just slightly as the pandemic wore on.

Looked at broadly, there’s no evidence that the pandemic had a significant impact on the rise of the nones in the United States. Obviously, there are many ways to measure American religiosity—affiliation is just one of them. But it’s much too early to know if COVID-19 will have long-term, permanent effects on church attendance. Some churches just returned to in-person services in the last few months, and renewed fears about new variants may continue to keep people in their homes for an indefinite time. But, for now, there’s little empirical evidence to claim that COVID-19 materially affected the American religious landscape.