For church leaders to be more effective in seeking the “welfare of the city” (Jer. 29:7) we should know what economic concepts mean, how they should be applied, and how they affect the local church. The purpose of the Economics for Church Leaders series is not to present a theology of economics, but rather to provide a basic level of understanding that will help church leaders think more clearly about how to apply their faith commitments to economics and public policy.

A price system uses price, expressed in a numeric monetary form, for the valuation and distribution of goods and services and the factors of production.

Perhaps it’s more accurate to say he turned 99 Cent II Diptychon, a photograph depicting an interior of a supermarket, into a few million. At the time this was the most expensive photograph in the world.

Even more amazing is that this was the third print of the same image that had sold for millions. Two others sold in 2006, one for $2.25 million and another for $2.48 million. Altogether the images earned $8.07 million. Not bad for a snapshot of a grocery store.

Gursky digitally altered the image to reduce perspective, forcing the viewer to see a familiar sight from a different perspective. Mostly what we notice in the picture is colors. In focusing on that aspect, though, the image draws our attention away from something beautiful and complex that we often take for granted. I’m neither an artist nor an art critic, but I want to draw your eye to that feature. 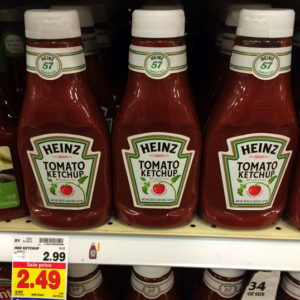 Do you see it? No, not the ketchup, but the price tag. At first glance it may not seem to convey any special meaning (other than that ketchup is on sale). But that single number—$2.49—conveys a nearly unimaginable level of information.

When Christians think of the majesty of God’s handiwork, we tend to think of the visible aspects of nature. We agree with King David that “The heavens declare the glory of God, and the sky above proclaims his handiwork” (Ps. 19:1). But there are intricate and beautiful aspects of God’s creative genius that we don’t often think about—or don’t think about as being created by God.

Take, for instance, the price system. In its most basic sense, a price is merely a numeric value assigned to a product or service. But we can also say that a price is a signal wrapped in an incentive to be coordinated by God. Economist Alex Tabbarrok explains what that means, explores the mystery and marvel of prices, and discusses how the price system allows for people with dispersed knowledge and information to coordinate global economic activity.

Who decides, though, whether ketchup will sell for $2.49 or whether a photograph will sell for $3.34 million? Mostly the decision is made by the consumer. Not directly, of course, and not by the consumer alone. But as economist Don Boudreaux explains, “Prices reflect the value consumers think the products are worth. Whether it’s the price of a bottle of ketchup or a Hermes Birkin purse, the pricetag is the end result of a ‘global chain of cooperation.’”

Too often we think about prices only when we are buying or selling something, and the price system only when it has been corrupted and abused. Such a narrow focus causes us to miss out on seeing the beauty and intricacy of God’s use of the price system for communication and coordination. God knows and cares about what may seem like trivial issues (such as whether you like ketchup on your fries) and has provided a way for our neighbors to help meet those needs.

As with most good gifts given by God to humans, we are able to corrupt it and use it in ways that harm our neighbors. Yet for the most part, the price system is an ingenious method of communication that has been used to improve the human condition.

The next time you say a prayer of thanks for your daily provision, remember to also thank God for the ingeniously complex system he created to get your daily bread to you.