A tuk-tuk ride through the streets of Phnom Penh will take tourists past many large and ornate places of worship—mostly temples and pagodas. Christian churches in Cambodia’s capital city, although less visible, might be spotted as well. But finding one with Christ-centered teaching is more difficult.

Freedom of religion in Cambodia returned only 25 years ago as the country recovered from the post-Vietnam War atrocities of the Marxist Khmer Rouge regime. Even so, Buddhism easily resumed its centuries-long spiritual grip on this Asian country with the highest percentage of Buddhists on earth. An estimated 95 percent of Cambodians adhere to the religion in some degree.

While Christian influence also reemerged in Cambodia, believers face ostracism for turning away from time-honored Buddhist traditions considered essential to life—practices related to festivals, marriages, funerals and more. Yet some beacons for the gospel can be found.

A Christian college with a Reformed and Presbyterian confession of faith sounds out-of-place in Phnom Penh. However, if the tuk-tuk driver will take you along an unpaved, bumpy road, you could discover a beautiful, modern campus with an equally out-of-place name: Westminster Theological College and Seminary (WTCS).

A further wonder comes upon learning the school provides full scholarships for all of its students—currently around 77. Most students are Cambodian, but others come from China, India, Korea, Myanmar, Vietnam, and the Philippines.

The college was established in 2011 by a group of retired pastors from the Korean American Presbyterian Church to address the need for theologically-trained church leaders in Cambodia. The campus further offers quarterly pastoral training that draws dozens of pastors from around the country.

Korean American Presbyterian Church members Daniel Kim and his wife, Young, reside in Orange County, California. After Daniel retired from pastoral ministry in 2003, the couple began to serve as itinerant teaching missionaries and eventually connected with WTCS through Daniel’s brother-in-law, who now serves as president of the school.

The Kims saw Westminster’s need for workers who could teach, train, and mentor students to become church planters and leaders. In 2011 they joined the college faculty and now spend several months of each semester in Phnom Penh. 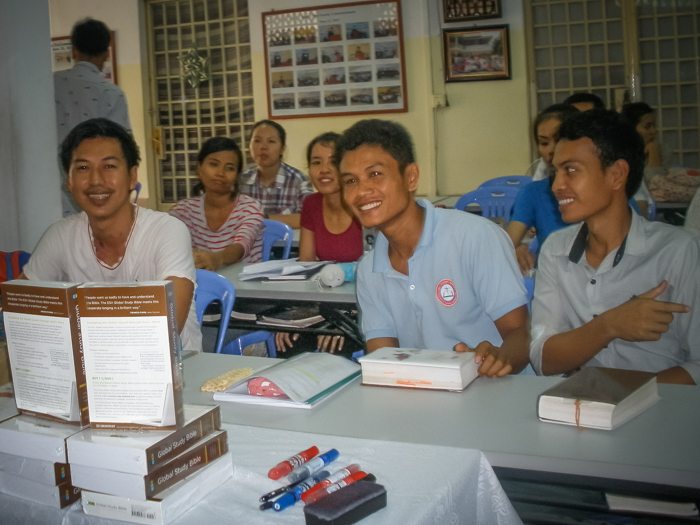 About five years ago, WTCS added a church to its campus. Westminster Presbyterian Church has baptized around 20 members.

“Getting an adult convert in Cambodia is not easy at all; the whole community has been geared to Buddhism,” Young said. “But the purpose of organizing this church was for the new generation of pastors to be examined and ordained following the biblical and reformed tradition.”

Young also mentioned an off-campus church plant that is led by a WTCS graduate. Cambodian Reformed Presbyterian Church has only a few adults but a crowd of children in attendance. She said the pastor catechizes his young congregation fervently, “and he looks forward to seeing them grow up to be mature adult disciples.”

While the Kims report spiritual growth among the WTCS students, they say physical growth of the school is slower due to the English proficiency requirement. Young explained that all courses are conducted in English since many Cambodian students learn the language in school and typically want to become proficient enough to increase their chances of getting better jobs. The college provides language training for those who need it.

Even finding and affording a study Bible is a challenge in Cambodia. Some organizations, including the Gideons, provide Khmer New Testaments for free, and a complete Khmer-language Bible can be obtained for around ten dollars. But English-language Bibles—especially study Bibles—are less accessible. Incoming Westminster students never arrive with one, according to Young.

Through their partnership with TGC International Outreach (IO), the Kims have obtained free copies of the English Standard Version Global Study Bible. “One of the first things we give our students is a copy of the ESV,” Young said.

Last spring, the couple traveled with additional IO-provided resources, including copies of The Reformation Study Bible and The Baker Illustrated Bible Commentary. Some of these were placed in the college library for use by both students and local pastors. Others went to graduates who now have pastoral and teaching roles.

For the fall term, Daniel and Young arrived with two Pastor’s Book Sets and 56 copies of The New City Catechism Devotional.

The Kims hope the Westminster students will be able to spread the gospel more widely by translating good theological materials they receive into their indigenous languages.