Why Are UFOs News?

Part of the $2.3 trillion coronavirus relief and government funding bill signed by President Donald Trump last December included a line stating the Pentagon and Director of National Intelligence must deliver a non-classified report with a “detailed analysis of unidentified aerial phenomena data” collected by the Office of Naval Intelligence and the FBI. That report is to be submitted to Congress next month.

That provision was added by Florida Senator Marco Rubio, who says his concern is not extraterrestrials, but the threat the objects pose to national security. “Anything that enters an airspace that’s not supposed to be there is a threat,” Rubio told 60 Minutes, in an episode that aired last week. He added that “the stigma of UFOs” should not keep the U.S. government from “seriously investigating” the unidentified flying objects seen by many military pilots.

Last month, the Department of Defense released videos of what Rubio is referring to. Three unclassified Navy videos, one taken in November 2004 and the other two in January 2015, have been circulating in the public domain after unauthorized releases in 2007 and 2017.

The other two videos are here and here on YouTube.

What Is a UFO?

The term UFO is an abbreviation for “unidentified flying object.” The only requirement to be classified or defined as a UFO is that an object must be flying (that is, traveling through Earth’s atmosphere) and not be readily identifiable as a known flying object, such as a bird or aircraft.

While that is the technical use of the term, the colloquial sense is often associated with an extraterrestrial aircraft being piloted, either directly or remotely, by alien lifeforms. According to the Oxford English Dictionary, an officer in the U.S. Air Force claims to have invented the term in 1957 to replace the term “flying saucer,” which had been in use since the 1940s.

Because of the connotation of UFO, the U.S. Department of Defense uses “unidentified aerial phenomena.”

What Is the History of Sightings?

Reporting of UFO sightings are all but nonexistent before the advent of manned flight. The first reports of UFOs began in the late 1890s, about a decade after the invention of the hot air balloon and four years after the creation of the first airships (i.e., steerable balloons).

Since then, public sightings of UFOs have often been related with an increase in interest in three factors: space-age technology (such as the launch of satellites), paranormal activity (events or phenomena such as clairvoyance or ghost-sightings that appear to be beyond the scope of normal scientific understanding), and conspiracies (especially those involving government cover-ups). Public fascination with UFOs appears to have peaked sometime between the 1970s and 1990s. The rise of communication technology, such as cell phones with cameras and the internet, seems to have led to the decline in the general interest of the topic.

“Look at all the people who now have personal cameras,” said David Clark, UFO adviser to the U.K.’s National Archives, in 2012. “If there was something flying around that was a structured object from somewhere else, you would have thought that someone would have come up with some convincing footage by now—but they haven’t.

“The reason why nothing is going on is because of the internet,” Clark added. “If something happens now, the internet is there to help people get to the bottom of it and find an explanation. Before then, you had to send letters to people, who wouldn’t respond and you got this element of mystery and secrecy that means things were not explained.”

Surprisingly, the decline in interest is happening at a time when reported sightings of UFOs has been increasing. The National UFO Reporting Center (an unofficial private group dedicated to UFO information) documented 147 sightings in 2006. But by 2014, that number had nearly jumped to 9,000. 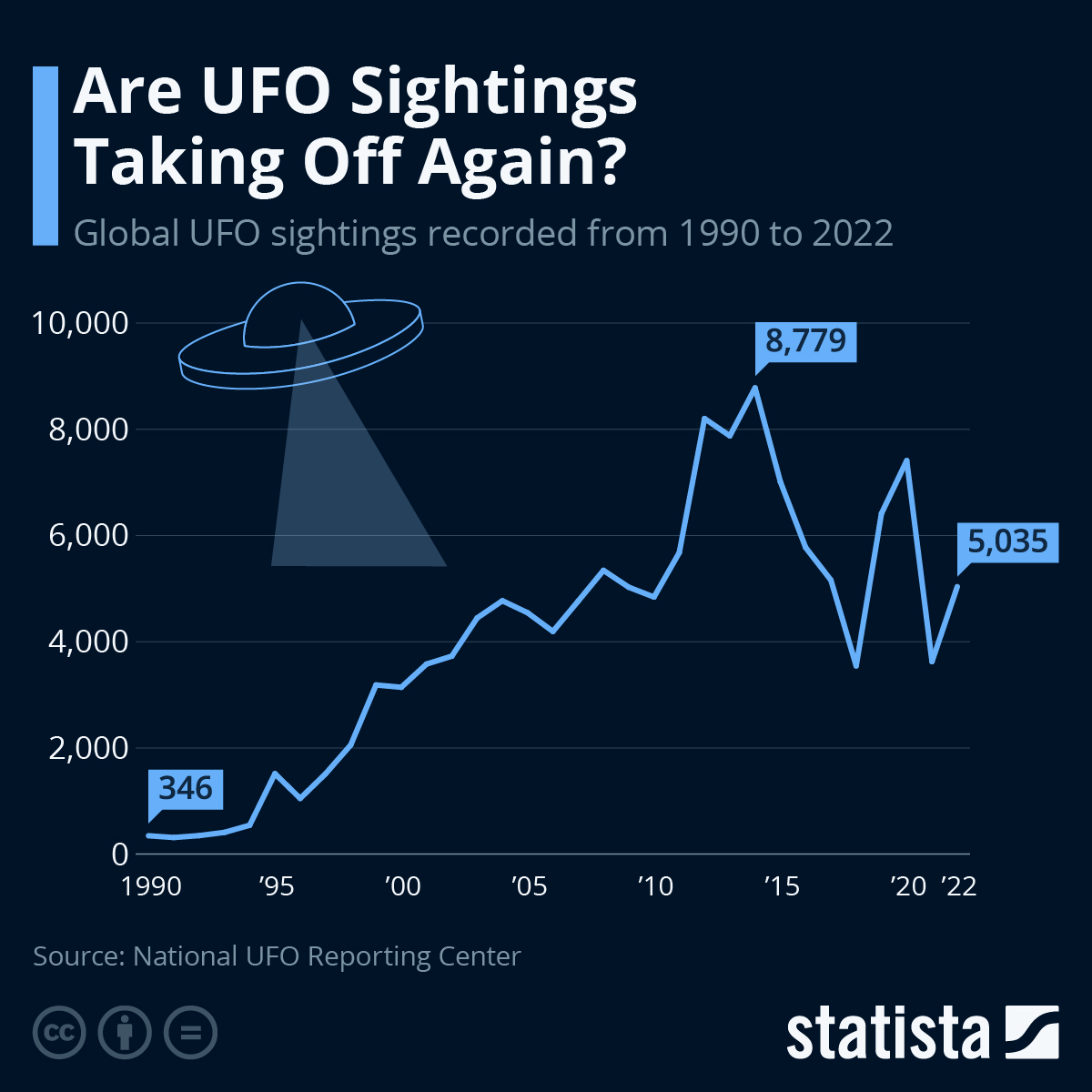 Can Christians Believe in Aliens?

Orthodox Christians already believe in at least one form of intelligent life that exists and was not created on Earth: angels (Neh. 9:6, Col. 1:16). For this reason, some Christians believe that, if aliens exist, they are a form of fallen angel (demons). But is it possible that other forms of intelligent alien life exist in the universe?

The answer depends on how we interpret the Bible and what we believe about God’s sovereignty.

The Bible does not explicitly affirm or deny the existence of non-angelic extraterrestrial beings. Some take the position that this implies such beings not only do not exist but that they cannot exist. For instance, some have pointed to a statement in the Westminster Confession of Faith (1:6)—“The whole counsel of God, concerning all things necessary for his own glory, man’s salvation, faith, and life, is either expressly set down in Scripture, or by good and necessary consequence may be deduced from Scripture”—and applied it to the issue of aliens. They claim that if aliens existed, God would have told us about such beings.

Other believers take the silence of Scripture as an opening from which we could conclude that it is possible such beings exist. Why would the Bible need to mention them if they were not to be discovered for 2,000 years after the founding of the church? Why would such knowledge be necessary when it would not affect billions of Christians throughout history?

Another factor is our perspective on God’s sovereignty, the right and power of God to do all that he decides to do (Job 42:2). Does God have the right to create intelligent alien beings without telling us about them in his Word? Many Christians would say he does have such a right, since he has made it clear: “For my thoughts are not your thoughts, neither are your ways my ways” (Isa. 55:8).

The reality is that such beings either do or do not exist, and that fact is known to God since he would have had to create them (Col. 1:16). Indeed, if aliens do not exist, it is because God has sovereignly chosen not to create them. Perhaps we should be more enamored with God’s sovereign power than with the question of whether he has used that power to create aliens.

Ultimately, since belief in aliens is neither commanded nor forbidden in the Bible, we should consider the issue one of the “disputable matters” (Rom. 14:1). While we may fruitfully enjoy discussing the issue, we should not let it divide us.

What About Ezekiel’s Vision?

During the height of UFO speculation, there were claims that the prophet Ezekiel’s inaugural vision (Eze. 1:1-28) was a UFO sighting. For example, in 1974 an aerospace engineer at NASA wrote The Spaceships of Ezekiel, which argued that the prophet’s heavenly vision of wheels within wheels was not an encounter with God but one of several encounters with ancient astronauts in a shuttlecraft from another planet.

There is also the contention, often made cheekily, that the vision was a UFO in the literal sense of being an unidentified flying object.

But both claims are wrong. The vision was neither of an alien nor unidentified; it was a theophany.