Barry called me every day for 11 years, usually more than once, sometimes up to 20 times a day. When Barry didn’t call, I thought something might be up. When Barry didn’t answer my call, I knew something was. After one particular day of radio silence, I went by Barry’s apartment. It was on the ground floor, which meant I could bang on the windows when he didn’t answer the door.

On this occasion, I glimpsed Barry huddled under a windowsill to stay out of my sight. Barry was 6’3″ and weighed 360 pounds, so he looked like a grizzly bear trying to hide behind a lampshade. I was filled with righteous indignation (at least that’s how I justified it).

“I know you’re using in there, Barry!” I yelled. “You can pretend you’re not in there, but God is—he sees you right now! A holy God is in that apartment while you light up!” Barry responded, “You just don’t understand, man. You don’t know what I’ve been through and how hard it is.”

It stings to admit I acted this way as a 23-year-old seminary student. I felt prophetic at the time, but I was a fool. I thought I was standing in Peter’s line calling “Repent!” when in reality I was far closer to the Pharisee: “Thank God I’m not a sinner like this.”

Only as I arrived to pick up Barry one Sunday morning did I begin to understand the depth of his struggle. I found him sprawled across the table with both arms gashed open, blood everywhere. Life was barely clinging to him. I called 911, and then lifted his arms above his head to slow the blood flow. As I hugged my dying friend, the depth of his pain was excruciatingly evident. Barry wasn’t spending his days marking out dark plans for his next hit. The next hit was a mirage of relief. He was chasing an illusion of freedom—freedom from memories of abuse, from sins of the past, and from harsh realities of the present.

Friends on a Mission

Barry and I became friends when his first pastor called me. Barry needed distance from the trials and temptations of the neighborhood. The old bar around the corner and the old friend next door pose a challenging atmosphere to a young believer. Barry moved a couple miles away into my neighborhood—a long way when you ride the bus or walk—in order to create helpful space for new habits and relationships to grow.

Our friendship sprouted from God’s Word. I would drop by and read the Bible with Barry. We’d read, talk, pray and then grab a bite at the deli down the street. Barry would try his most recent rap on me over a coney dog, or we’d throw a fishing line in the Detroit River to see if anything was biting. 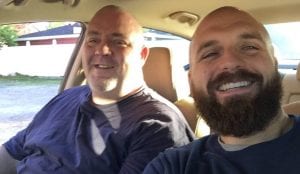 Barry and I became partners in the gospel as the Spirit used our different gifts and strengths to help each other. Barry had a heart for the broken, the needy, the downtrodden. He knew their struggle, largely because it mirrored his own. He was always stepping out to help them.

Until the day Barry died—of sepsis in March 2018—he lived on less than $1,000 of income and government assistance per month, yet I saw him give food away nearly every week. I saw him give the good news about Jesus away even more. When I introduced Barry to a man just released from prison, Barry gave him a bed in his apartment within five minutes. The mission fused our friendship. I’d studied farming; Barry could see the harvest. God used us together in ways I never could’ve imagined. But he also used Barry to change me.

Friendship as a Mirror

I inhaled one piece of cheese bread after another as I stood by the kitchen sink. My wife told me to grab a plate, sit down, and slow down. I had tunnel vision. A complex counseling situation was crushing me. I was responding the way I’d responded so many times before: with food.

Suddenly, it dawned on me just how similar Barry and I were. Where I grew up, you didn’t deal with stress through drugs or alcohol. Those things weren’t acceptable, but other sin was. I ran to pizza because no one raised me to run to dope. But make no mistake: my kitchen counter was Barry’s corner. His bar was my pizza shop. My sin was more culturally acceptable, but it was no less lethal when I leaned on it rather than God.

My sin was more culturally acceptable, but it was no less lethal when I leaned on it rather than God.

The Spirit began using Barry to expose my sinfulness. At a heart level, he and I were no different. We had different mentors, knew different neighborhoods, and were taught different ways to cope. My life was a mountain of undeserved kindness. I was raised in church; generations of my family knew Jesus; my education was phenomenal; my upbringing was sheltered.

Not so for Barry. His upbringing was different in almost every way. Yet there I was, nursing the same sinful habits with more culturally acceptable nameplates. Replacing God brings judgment, regardless of whether we use carbs or cocaine.

A psychologist might call my misunderstanding of Barry the Fundamental Attribution Error. When other people fail, you point to their flawed character or harmful intentions. Their failure is a problem with who they are or an expression of their hostility toward me. When I fail, however, I point to the circumstances and pressures in my life. You’re late because you’re lazy or don’t care. I’m late because I’m busy and it’s been a crazy week.

My pride told me that Barry was naïve and too soft on people, that his struggles were personal discipline problems. That man Barry housed straight out of prison? He stole Barry’s coat. Those people who needed food? They could somehow afford cigarettes. My clinical analysis saw through them. In fact, I saw only the worst in them.

Other Side of the Tracks

Barry would often gently remind me: “You gotta remember, Wavey Gravey (his nickname for me), God gave you loving parents and a safe home and so many blessings. Lots of people are just trying to survive. They’ve almost never felt safe and they’ve never been taught.”

I can’t remember those words without tearing up. He was correct. I grew up on the “right” side of the tracks. I had—and still have—so much to learn. Barry wanted me to treat others in light of the grace God had shown me. The Spirit had created a gentle, merciful heart in that mountain of a man. Without Christ, Barry embraced the harsh facade a drug dealer wears to survive the street. God mercifully stripped Barry of that and replaced it with a Spirit-wrought gentleness toward the least, the last, and the lost. And he used Barry to strip away the pride in me.

God used Barry to strip away the pride in me.

The Spirit used Barry’s understanding of the gospel to transform my perspective of myself. In Christ, we can both see sin clearly and also show mercy gently. Every person is a complex combination of villain and victim. They have done horrible things. Horrible things have been done to them. They need to turn from sin to Jesus Christ.

Every month I helped Barry with his budget. I did this for 11 years. And every month for 11 years I would bust him over spending more than he had on stupid stuff. But as I sat with a young man in seminary this morning, I told him, “You know what, Barry never got that stinkin’ budget in order. Despite all that time I spent harassing him about it, he never got it down. But what does it matter now? Barry is with Jesus! He’s experiencing unending joy in the presence of our King. Jesus didn’t stiff-arm Barry at the door because his budget was out of whack—he embraced him with the love bestowed upon a righteous son. I see it now! The God who began a good work in Barry completed that work (Phil. 1:6) without needing me to get him all spiffed up and squared away.”

God’s truth deserves obedience and demands declaration. But sometimes, people like me need to take a chill pill and walk gently with those who struggle. The Spirit’s the barber, and he’ll get everyone lined up right in the end.

These lessons have transformed how I’ve gone about planting our church. You can’t plant a church without gentleness (okay, you can, but you certainly won’t lead it well). Gentleness is treating others in light of God’s kindness toward you. A gentle man knows that God has produced the good in him—against his best efforts. A gentle man knows he’s more sinful than others perceive. A gentle man understands the magnitude of God’s mercy given him in Christ.

And this was Barry. Was he a messed-up sinner? You bet. But he knew it. And he reveled in the grace of God in Christ. Because of that, he was gentle. He’s gone now, but I’m praying that God would make me more like my late, gentle friend.

David Doran Jr. serves as lead pastor of Resurrection Church in Lincoln Park, Michigan. He is married to Abigail, and they have four children. You can follow him on Twitter.