This week is the 500th anniversary of the Reformation. Luther’s action in 1517 launched several varieties of Protestantism, including the tradition that took his name. Here are nine things you should know about Lutheranism.

1. Lutheranism is a tradition within Christianity that began in the Protestant Reformation. With a membership estimated at around 80 million members worldwide, Lutheranism is the third-largest Protestant movement, after Anglicanism and Pentecostalism.

3. Luther’s opponents first used the term “Lutheran” in 1519. Luther preferred the term “evangelical,” but the term also began to be used for those who followed the teachings of other reformers, such as Calvin and Zwingli. Lutherans adopted the label for themselves in the middle of the 16th century,

4. There a large number of Lutheran denominations, with the two main bodies in America being the Lutheran Church—Missouri Synod (LCMS) and the Evangelical Lutheran Church of America (ELCA). The LCMS is the more conservative of the two, teaching that the Bible is the “inspired and inerrant Word of God.” The ELCA holds that Scripture is not necessarily always accurate or trustworthy in all its details and parts. The two also disagree on “altar and pulpit fellowship” (allowing the pastors of one church to preach and celebrate Holy Communion in the church of another). The LCMS limits such engagement to certain other confessional Lutheran church bodies, while the ELCA is in full communion with the Presbyterian Church (USA), the Reformed Church in America, the United Church of Christ, the Episcopal Church, the Moravian Church, and the United Methodist Church.

5. Local Lutheran congregations are part of a regional or national organization called a synod. (It’s not always possible to tell from the name whether the synod is national or regional. A prime example is the Lutheran Church—Missouri Synod which is a national synod divided into districts (i.e., the Michigan district). Synods unite the work of congregations within their areas, serve as regional support, and guide the hiring of pastoral and other staff candidates. 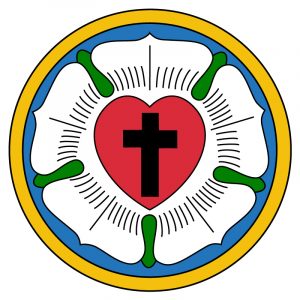 8. Lutherans believe there are two sacraments (defined by Lutherans as “rites, which have the command of God and to which the promise of grace has been added”), baptism and communion (i.e., the Lord’s Supper). Lutherans teach that baptism “is necessary to salvation, and that through baptism is offered the grace of God, and that children are to be baptized who, being offered to God through baptism are received into God’s grace.” On communion, they teach that, “the body and blood of Christ are truly present, and are distributed to those who eat the Supper of the Lord.” (They reject, however, the Catholic doctrine of transubstantiation: “As regards transubstantiation, we care nothing about the sophistical subtlety by which they teach that bread and wine leave or lose their own natural substance, and that there remain only the appearance and color of bread, and not true bread. For it is in perfect agreement with Holy Scriptures that there is, and remains, bread, as Paul himself calls it, 1 Co 10: 6: The bread which we break.”)

9. Although there are difference related to issues such as predestination and Christology, the Lutheran’s distinctive view of the sacraments is the primary doctrinal divide with those of the Reformed tradition. For example, Calvin believed that Christ is spiritually present in the Lord’s Supper, while Luther taught, “It is the true body and blood of our Lord Jesus Christ, under the bread and wine.” The Reformed tradition also rejects Lutheran teaching on baptismal regeneration. (i.e., that baptism is necessary to salvation). Luther taught, “Baptism is not simply common water, but it is the water comprehended in God’s command, and connected with God’s Word. . . . It worketh forgiveness of sins, delivers from death and the devil, and gives everlasting salvation to all who believe, as the Word and promise of God declare”).

Other posts in this series: