Rachel Held Evans had at least two stated goals for writing A Year of Biblical Womanhood, according to the promotional material accompanying my advance review copy. Under “Why She Wrote the Book,” Evans says:

I’ve long been frustrated by the inconsistencies with which “biblical womanhood” is taught and applied in my evangelical Christian community. So . . . I set out to follow all of the Bible’s instructions for women as literally as possible for a year to show that no woman, no matter how devout, is actually practicing biblical womanhood all the way. My hope is that the book will generate some laughs, as well as a fresh, honest dialogue about . . . biblical interpretation. (emphasis mine)

Evans wants to show that everyone who tries to follow biblical norms does so selectively—“cherry picking” some parts and passing over others. She also says she wants to open a fresh, honest dialogue about biblical interpretation, that is, how to do it rightly and well. Rachel, I tried twice to get in touch with you when you were in New York City on the talk shows but wasn’t able to connect. So here’s what I would have said if we could have gotten the chance to open that dialogue.

The best way to accomplish both of your goals would have been to attempt to live by all the commandments the Bible genuinely addresses to Christian women, while discussing the rules of responsible interpretation along the way. I would have been glad to read a book like that, whether I agreed with its conclusions or not. However, that is not the book you wrote. Instead, you began your project by ignoring (actually, by pretending you did not know about) the most basic rules of hermeneutics and biblical interpretation that have been agreed upon for centuries.

Perhaps the most basic rule—agreed upon by all branches of Christianity—is that Jesus’ coming made the Old Testament sacrificial system and ceremonial laws obsolete. Because Jesus taught that “all foods are clean” (Mark 7:19), and God told Peter not to call impure the things God has made pure (Acts 11:9), and because the entire books of Galatians and Hebrews explain this change at length, all Christians have known that observing the “clean laws” of the Old Testament is no longer incumbent on them. 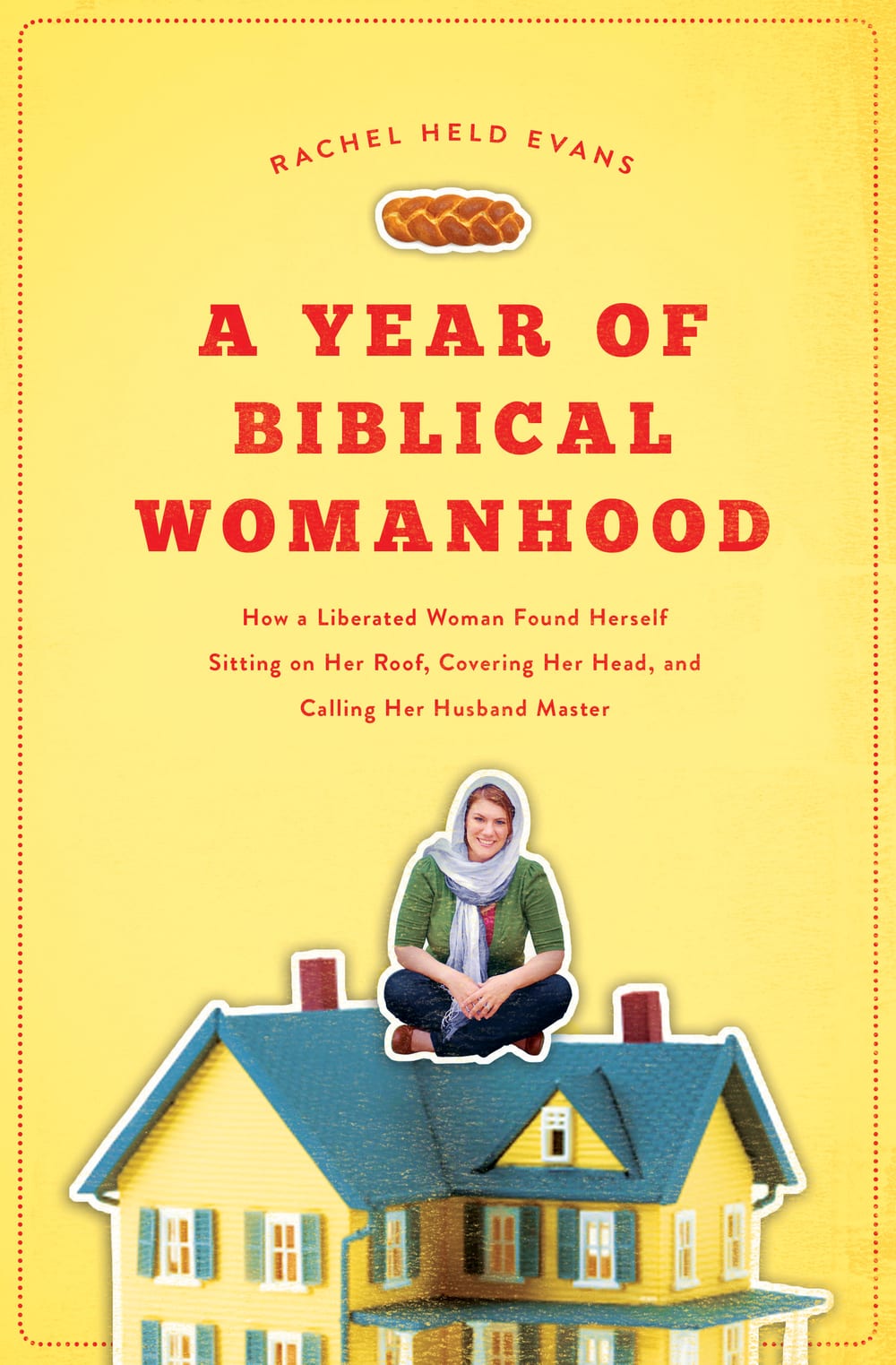 A Year of Biblical Womanhood: How a Liberated Woman Found Herself Sitting on Her Roof, Covering Her Head, and Calling Her Husband “Master”

A Year of Biblical Womanhood: How a Liberated Woman Found Herself Sitting on Her Roof, Covering Her Head, and Calling Her Husband “Master”

With just the right mixture of humor and insight, compassion and incredulity, A Year of Biblical Womanhood is an exercise in scriptural exploration and spiritual contemplation. What does God truly expect of women, and is there really a prescription for biblical womanhood? Come along with Evans as she looks for answers in the rich heritage of biblical heroines, models of grace, and all-around women of valor.

Jesus called himself the final temple (John 2:21) and offered himself as the final sacrifice, the Lamb of God who takes away the sin of the world (John 1:29). This is why no Christian anywhere has offered sacrifices since the crucifixion, nor observed the rules of temple worship (cf. Galatians and Hebrews). This most fundamental rule of interpretation is based on the fact that the Bible is the story of God’s salvation coming into the world, climaxing in Jesus, and therefore we can’t read the first part of the Bible as if Jesus never came in the last part.

Yet you, who surely know this as well as anyone, proclaimed at the start of your book: “From the Old Testament to the New Testament, from Genesis to Revelation, from the Levitical code to the letters of Paul, there [will be] no picking and choosing” (xvii, emphasis mine). To insist that it would be “picking and choosing” to preclude the Levitical code from your practice of biblical womanhood is disingenuous, if not outright deceptive.

In making the decision to ignore the tectonic shift that occurred when Jesus came, you have led your readers not into a better understanding of biblical interpretation, but into a worse one. Christians don’t arbitrarily ignore the Levitical code—they see it as wonderfully fulfilled in Jesus. In him, we are now clean before God. I doubt if you had given birth during this year you would have made a sin offering after your period of uncleanness (Lev. 12:6-7). I doubt this because you know that in Jesus the sacrifices, as well as the clean laws, are fulfilled and therefore obsolete.

Furthermore, in choosing what passages you would take as models for your behavior, you chose narrative passages rather than prescriptive ones. This is a second major hermeneutical principle you concealed your knowledge of throughout the book. Polygamy, concubinage, rape, adultery, and a host of other sins, many of them against women, truly happened and are recorded in the biblical record with unblinking faithfulness. Yet you cite accounts of historical events such as Genesis 16, 30, and 35 and remark, “If you were a slave or concubine, you were expected to be sexually available to your master,” as if the Bible condones this behavior (48). However, it never endorses such conduct, much less commands it. On the contrary, recording the relentlessly sinful behavior of his people was God’s way of demonstrating how desperately in need of a savior they really were.

Unlike the sacred texts of other religions, the Bible is not simply a collection of ethical principles by which to live. It is a record of human sin and of God’s intervention in history to save his people. Much of it should be read as news, just as we read the newspaper. Horrible acts are recorded in my copy of The New York Times every morning, but I don’t commit the hermeneutical error of supposing the editors of the Times are approving or endorsing such behavior.

Understanding a text’s genre represents one of the most basic principles of biblical interpretation, yet you feign ignorance of this in order to create a straw man—or, better, a straw woman—whom you can claim is the product of all sorts of absurd behavior described in the Bible. Described, yes. Prescribed, no.

There is a third rule of interpretation that is widely agreed upon: look for the author’s intended meaning within a text’s historical context. Again, in order to inject the book with humor, you ignore this principle. For instance, Proverbs 31:23 (“Her husband is respected at the city gate”) does not mean you should stand by the side of the highway holding a “Dan is awesome” sign (94). Ancient Israel’s city gate was where the elders sat—with the city council and town courtroom rolled into one. This statement meant that a godly woman’s husband has honor and a good name in society.

A much more serious example of ignoring context is found where you write, “We tend to ignore the embarrassing bits [of the Bible], like when Paul tells Titus, ‘Cretans are always liars, evil brutes, lazy gluttons’” (259). However, what Titus 1:12 actually says is, “Even one of their own prophets has said, ‘Cretans are always liars, evil brutes, lazy gluttons’” (emphasis mine). Paul is citing what the Cretans say about themselves, quoting Epimenides of Knossos. In context the statement makes sense. (See Gordon Fee’s commentary on this passage.) Taking it out of context, however, makes it look like a racist statement. Why would you do that?

All this talk of literal interpretation leaves readers completely unprepared for your conclusion:

For those who count the Bible as sacred, the question when interpreting and applying the Bible to our lives is not, Will we pick and choose?, but rather, How will we pick and choose? We are all selective in our reading of Scripture . . . [which] is why there are times when the most instructive question to bring to the text is not, What does it say?, but What am I looking for? (295)

You tell readers they won’t ultimately be able to follow everything the Bible teaches, that they will have to choose some things and ignore others. But what will be their standard or means for doing so? Throughout your book, you have ignored or even hidden from readers the fundamental principles of scriptural interpretation—including the difference between narrative and didactic, as well as the importance of placing commands in their context within redemptive history.

You say your ultimate goal is not to determine what the biblical authors say, but to see in the Bible “what I am looking for.” You go on immediately to say, “Are we reading with the prejudice of love or . . . of judgment and power, self-interest and greed?” (296) So “love” is the reason you will reject some parts of the Bible and embrace others? But where do you get your definition of love if not from the Bible itself? And if you say, “Parts of the Bible express love, and other parts express power interests,” you’ve clearly gotten your standard and definition of love from outside the Bible—specifically, from contemporary sensibilities—and these are your ultimate authority and norm.

Rachel, I can and do agree with much of what you say in your book regarding the ways in which either poor biblical interpretation or patriarchal customs have sinfully oppressed women. I would join you in exposing churches, books, teachers, and leaders who have imposed a human agenda on the Bible. However, you have become what you claim to despise; you have imposed your own agenda on Scripture in order to advance your own goals. In doing so, you have further muddied the waters of biblical interpretation instead of bringing any clarity to the task.

As a woman also engaged in trying to understand the Bible as it relates to gender, I had hoped for better.