Long ago I read the fable about a boy who discovered a magic spool of thread. When he pulled the thread, the “boring” days and weeks and months of his youth sped by as if they were mere seconds. Thrilled that he no longer had to experience the mundane, he began pulling on the thread more and more so he only experienced the most exciting, meaningful events. But one day, the thread ran out, and the boy—suddenly an old man—realized he had lived an empty, thoughtless, and ultimately meaningless life. While the magic thread had let him breeze through his years with no uncertainty, pain, or reflection, it had robbed him of those immaterial things that make life rich and valuable.

Consider the possibility that in 2017, the “magic thread” goes by another name: the internet. Such is the thesis of journalist Franklin Foer in World without Mind: The Existential Threat of Big Tech. World without Mind advances a sharp but increasingly compelling proposal, that the digitization of Western life—especially the digitization engineered by tech giants Google, Amazon, and Facebook—represents not just an epochal landmark in accessibility and convenience, but an outright assault on things that matter much more.

Like the spool of thread in the fable, Foer believes the internet age has collapsed our lives in the name of streamlining them, and that surrendering more power in the public square to massive technopolies, in exchange for innovation and ease, will have grievous consequences in our culture.

Foer, a former editor of The New Republic, is a journalist, and his professional perspective shapes his jeremiad. When he refers to the “existential threat” of tech, he’s not talking about the knotty challenges it brings to public morality, parenting, interpersonal relationships, and the like. Rather, Foer warns that Google, Amazon, and Facebook all represent different attacks on knowledge.

Google, Foer warns, is the undisputed gatekeeper of public information, and it desires to reach all areas of life. Amazon has forever altered the commercial relationship between creatives and the people who would support their work, and Facebook’s algorithms subtly manipulate millions to see the parts of their world Mark Zuckerberg’s engineers believe they should see. All of this trends, Foer writes, toward a technological monopoly on human thought itself:

When it comes to the most central tenet of individualism—free will—the tech companies have a different way. They hope to automate the choices, both large and small, that we make as we float through the day. It’s their algorithms that suggest the news we read, the goods we buy, the path we travel, the friends we invite into our circle. (3)

Speaking of circles, the portrait that Foer paints of Silicon Valley and the technopoly is startlingly similar to the dystopian nightmare The Circle, the 2013 Dave Eggars novel about a cult-like social media company that destroys the world’s private thought. Foer not only distrusts the effects of the technology itself on us, he distrusts the motivations and worldviews of the people running the show. Much like Eggars’s fictitious cult, big tech, according to Foer, wants to invade all corners of human life—and doesn’t particularly care what it has to do to get there.

What Is Big Tech?

Foer’s fears are not baseless. While his historical excursuses into the history of Big Tech aren’t the book’s strongest points, his warnings are well-taken. The architects of Western uber-connectivity aren’t simply playing with the toys they find; they’re advancing a coherent vision of human existence.

Foer traces this vision back to Stewart Brand, a child of the sexual and societal revolutions of the 1960s, whose publication the Whole Earth Catalog shaped the techno-eschatological worldview of people like Steve Jobs. 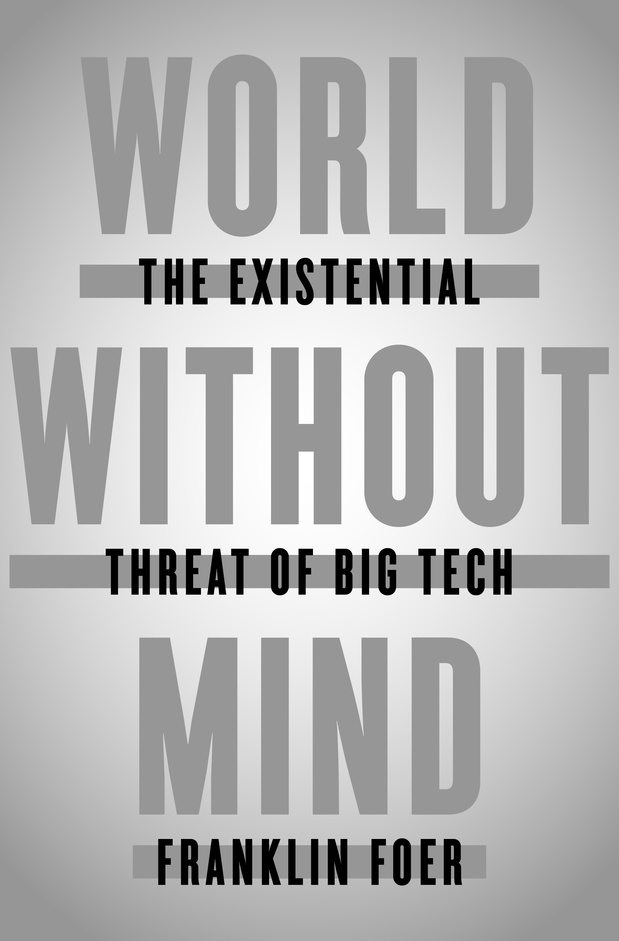 World Without Mind: The Existential Threat of Big Tech

World Without Mind: The Existential Threat of Big Tech

Franklin Foer reveals the existential threat posed by big tech, and in this polemic gives us the toolkit to fight their pervasive influence.

At stake is nothing less than who we are, and what we will become. There have been monopolists in the past, but today’s corporate giants have far more nefarious aims. They’re monopolists who want access to every facet of our identities and influence over every corner of our decision-making. Until now few have grasped the sheer scale of the threat. Foer explains not just the looming existential crisis but also the imperative of resistance.

“We are as gods and might as well get good at it,” Brand declared, infusing the postmodern sensibilities of the hippie commune with unflagging trust in cutting-edge scientific novelties. Foer refers to the Catalog as a “foundational text of Silicon Valley,” and a window into why the Big Tech giants “view themselves as revolutionary agents, elevating the world to the state of oneness that Brand spent his life chasing” (20).

Foer spends a great deal of time profiling this ideological heritage and the self-referential, ruthlessly utilitarian ethos that it inspires in Big Tech. Sometimes his warnings about the techies land a solid punch, but just as often they feel over-sold and more like personal score-settling. Indeed, crucial to World without Mind is Foer’s testimony of losing his prestigious job at The New Republic because (in his telling) new leadership wanted to reshape the magazine in the image of analytics and big data. Foer freely acknowledges that losing his job left him disproportionately hostile to Silicon Valley.

Readers should take Foer at his word. The sins of Big Tech aren’t the sole responsibility of data miners, computer geeks, and Gen-X hippies. Facebook, Google, and Amazon flourish ultimately because ordinary consumers—perhaps unthinkingly, perhaps not—want them to.

Our Gains and Losses

Why do we want them? Because, as Foer writes, they make life easy. Each of the “big three” tech companies offers a tempting exchange: give up just a little bit of our privacy and organic thought, and in return they’ll give us speed, efficiency, and control. Social media algorithms curate our experience of current events (not to mention our experience of each other), making it easier than ever to “feel” informed, but harder than ever to actually be informed. “Facebook,” Foer observes, “is constantly tinkering with the quality of news and opinion that it allows to break through the din, adjusting the quality of political and cultural discourse in order to hold the attention of users for a few more beats” (74).

How many times do we stop to consider that the news we attain via social media is proactively filtered by a technology corporation, whose financial viability depends on users needing the service more than they actually need the information it provides? Likewise Google (abetting the death of expertise via advertisement-fueled data) and Amazon (choking artists and creatives through market dominance) act as “gatekeepers” to modern knowledge, subtly manipulating access to make their own monopolistic grip tighter and more profitable.

Foer’s concerns about the assault of Big Tech on journalism are valid and urgent, even though one wishes he were a bit more fair-minded about the role of digital platforms in keeping larger media outlets accountable for their mistakes. The New Republic itself, for example, was nearly undone in the 1990s when its star reporter was exposed, by a fledgling online journal, as a serial liar (Foer somehow makes it through an entire book on journalism and technology without mentioning this episode).

I sympathize quite a bit with Foer’s nostalgia for the pre-internet information economy, but the relationship between media and the web is more complicated than that of sheep versus wolf.

Inhabiting a World with Cheap Words

The readers who will benefit most from the revelations in World without Mind are those who sense intuitively that something is “off” about the digital information economy but have a hard time expressing what that is.

Whereas books like Alan Jacobs’s How to Think [20 quotes | read TGC’s review] are more directly concentrated at the experience of online life and its challenges to personal reflection, World without Mind takes a broader view of the economic and cultural consequences of the click. Foer compares consumer awareness of Big Tech to consumer awareness of food. “Over the last two decades, readers have come to regard words as disposable goods,” Foer writes, likening the advent of cheap ideas to the ascent of fast food.

That’s a powerful analogy that Christians ought to take seriously. Stewardship of our minds isn’t less important than stewardship of our bodies. And if not everything we put in our mouths is created equal, than neither are things we consume with our brains. Followers of Jesus have an special moral obligation to be truth-thinkers and truth-tellers, and that obligation entails being aware of how digital technologies, and the companies that create them, shape our experience of the world through the internet.

We divine image-bearers are embodied creatures, which means there is spiritual significance to the physical and local that the ephemeral and instant can’t fully match. Perhaps those of us in a social media, Google, buy-with-one-click age should periodically pause to contemplate the fate of the boy who pulled too much of that magic string. Life looks bright and thrilling on a screen, and you don’t need to wait long for anything. But it’s the mundane, the un-shareable, and the dust-covered that often yield better joys and evoke fuller gratitude.