In his latest book, Cal Newport says the quiet part out loud: “No one had ever stopped to wonder about whether the way we’re working was actually working” (30).

It isn’t. And Newport says it doesn’t have to be that way.

Newport, a professor of computer science at Georgetown University, is well known in the work and productivity world. His bestselling Deep Work: Rules for Focused Success in a Distracted World taught the value of focus in a world of distractions. 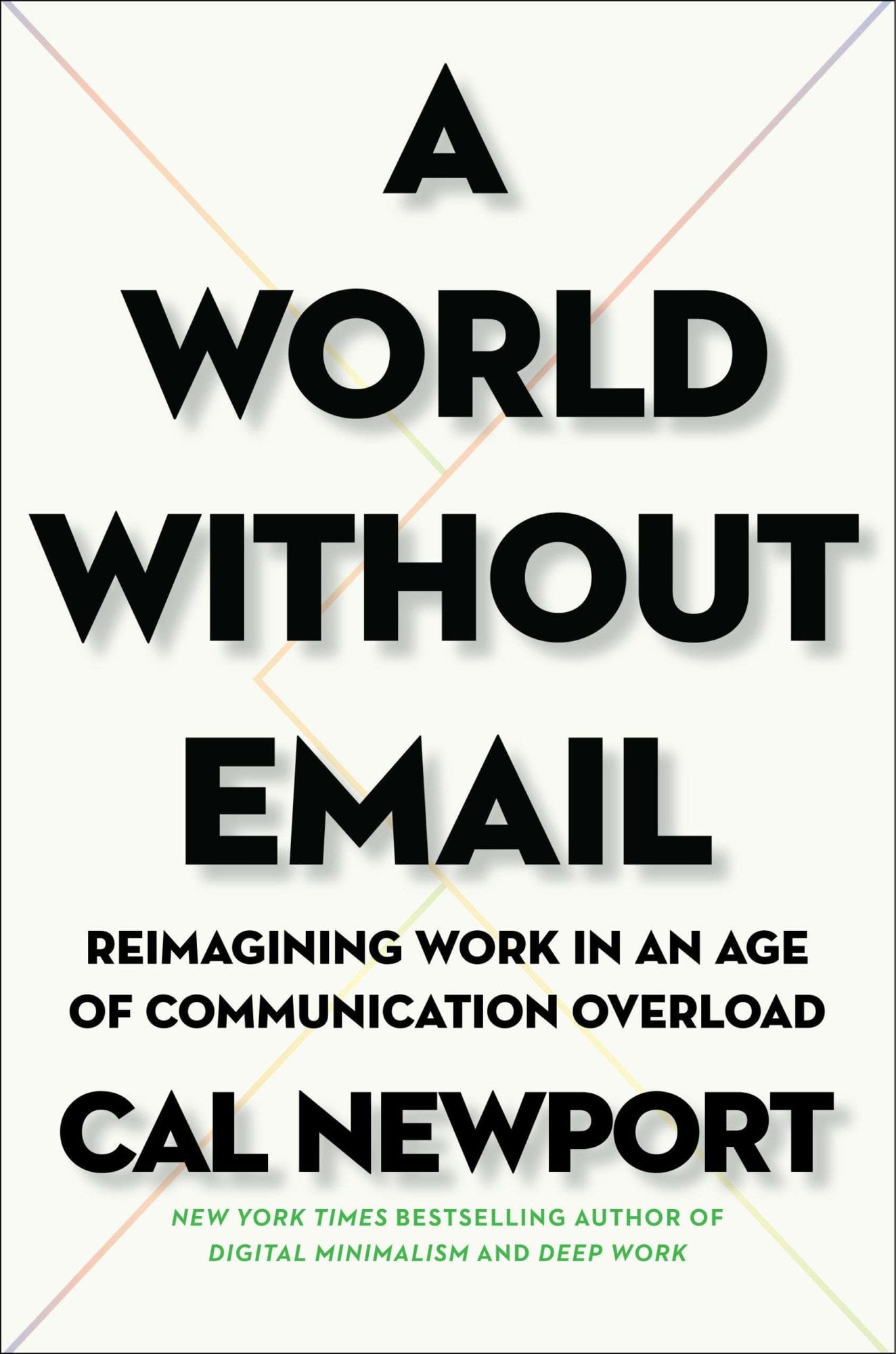 A World Without Email: Reimagining Work in an Age of Communication Overload

A World Without Email: Reimagining Work in an Age of Communication Overload

Penguin Random House. 320 pp.
We have become so used to an inbox-driven workday that it’s hard to imagine alternatives. But they do exist. Drawing on years of investigative reporting, author and computer science professor Cal Newport makes the case that our current approach to work is broken, then lays out a series of principles and concrete instructions for fixing it. In A World Without Email, he argues for a workplace in which clear processes—not haphazard messaging—define how tasks are identified, assigned, and reviewed. Each person works on fewer things (but does them better), and aggressive investment in support reduces the ever-increasing burden of administrative tasks. Above all else, important communication is streamlined, and inboxes and chat channels are no longer central to how work unfolds. The knowledge sector’s evolution beyond the hyperactive hive mind is inevitable. The question is not whether a world without email is coming (it is), but whether you’ll be ahead of this trend. If you’re a CEO seeking a competitive edge, an entrepreneur convinced your productivity could be higher, or an employee exhausted by your inbox, A World Without Email will convince you that the time has come for bold changes, and will walk you through exactly how to make them happen.
Penguin Random House. 320 pp.

That said, despite its title, the book isn’t strictly about email. “Email” functions in the book as a shorthand representing a work culture structured around constant connectivity. Email and related tools like Slack are a problem, but there’s a problem behind the problem: the assumption that our work should be “centered around ongoing conversation fueled by unstructured and unscheduled messages” (xvii), which Newport calls the “hyperactive hive mind.”

Few readers of this book will require convincing that a culture of constant distraction is harmful, though Newport ably illustrates the reasons why across the first two chapters. What most readers won’t realize, and what Newport shows in chapter 3, is that no one ever consciously decided to work this way. Instead, we adopted email as a communication tool that was both fast and asynchronous before we realized the transformative effect it would have.

That’s because, as Neil Postman once argued, new media don’t merely add something to a culture. Instead, they change the culture: “In the year 1500, after the printing press was invented, you did not have old Europe plus the printing press. You had a different Europe.” Similarly, Newport shows that email functions the same way: the office of today is not 1991 plus some new communication tool; “it’s instead a different office altogether” (258).

Modern approaches to productivity miss this point entirely (101). Consider the standard fare one may find for productivity in email: tips for better subject lines, filing systems that find information faster, templates that enable speedier replies. Newport argues these solutions are like using a bigger bucket to empty water from a leaking ship, when the greater need is to patch the hole. Stated differently, Newport offers a clear diagnosis and suggests we’re treating symptoms rather than the disease. I’m convinced he’s right.

Working Toward a Better Future

If the first half of the book is diagnosis, the second half is prescription (of sorts). Across several chapters, Newport offers principles for designing alternatives to the current office culture. All of this is grounded in the idea that, in a knowledge-work economy, success depends on how well we safeguard employees’ ability to focus attention and add value (103).

In a knowledge-work economy, success depends on how well we safeguard employees’ ability to focus attention and add value.

It follows naturally that organizations should design workflows that help workers thrive (143). Newport affirms ticket systems and task board tools like Trello as helpful options in escaping the inbox and organizing work in ways conducive to focus. Along the way, Newport suggests a multitude of ways individuals can implement small changes, even if their organization doesn’t. These suggestions are among the most helpful in the book.

Ultimately, though, readers may find Newport’s diagnosis in the first half more satisfying than the prescriptions in the second. You won’t find a road map to a world without email. This could lead to a critique that the book doesn’t quite deliver on the promise its title suggests, but such a critique would be misplaced.

In truth, creating a world without email was never the goal, nor, as Newport admits, the most accurate possible title (258). One can forgive an author and publisher, though, for forgoing A World Without the Hyperactive Hive Mind, which would catch the attention of few outside of beekeeping.

Henry Ford informs the book’s ultimate goal. As Newport points out, Ford is credited with inventing the modern assembly line (97). What began as a bespoke process requiring 12.5 hours to manufacture a Model T dropped to 93 minutes on the assembly line.

But what becomes lost in that conversation is the history of experiments from 1908 to 1914 to develop the assembly line. Similarly, the workplace needs an innovation, and Newport calls readers to a “a spirit of experimentation and reinvention” (100).

He’s aiming to “spark the development of new strategies” (259). More still, Newport is perhaps most effective in creating permission structures. They would allow readers to question whether they want to continue in the soul-exhausting morass that is the hyperactive hive mind or whether they want to demand an alternative.

A World Without Email makes no claim to being a Christian book, but there’s much Christians can and should learn from it. Practically, especially for those of us with any degree of say in the structures and processes of our work culture, it’s worth asking whether the systems are stewarding our energies and those who serve alongside us to the highest possible degree.

Many of the steps Newport suggests are beneficial in the context of the Christian life. Learning to focus, after all, can go hand in hand with cultivating self-control and crucifying pride.

Learning to focus, after all, can go hand in hand with cultivating self-control and crucifying pride.

At the same time, this book serves as a reminder that, as Wendell Berry has put it, we are creatures and not machines. We should recognize these limits. As Christians we can appreciate how reducing the exhausting and totalizing effect of hyperactive hive culture would lead to greater human flourishing. We should be among the first to encourage such change.

More broadly, we should pay attention to the argument that spans all three of Newport’s most recent books. In short, Newport points out a problem. He’s adamant (rightly so) that the laissez-faire approach to structuring knowledge work coupled with captivity to digital distraction is not the pathway to peace and purpose. But in doing so, ultimately Newport is asking readers to consider what will lead to a meaningful, satisfying life.

In other words, what’s interesting about Newport’s works is that they aren’t merely about work (this is also seen in his podcast, on which Newport regularly fields questions about living a “Deep Life”). That’s why I think he resonates with so many. He’s writing, persuasively, about how we do our work, but by situating this issue within a quest to live a meaningful life,  he’s pointing to more primal questions: What am I here for? Is there any point to all of this?

These are fundamentally metaphysical, and even religious, questions. While Newport does not suggest any answers (nor does he set out to), it’s clear he’s considered the questions.

In fact, at the end of one recent interview Newport takes up some of these existential and metaphysical questions more explicitly and shows himself to be conversant with several significant theologians. Newport attributes some of his interest in this space to his grandfather, John Newport, who was a theologian and former provost of Southwestern Baptist Theological Seminary. In any case, what’s clear in Newport’s work is that behind deep work there’s something deeper still. As Christians, we should be eager to join in that conversation.

In all, the main goal of A World Without Email is to point out how the system around us is broken, to point to a future that doesn’t yet exist, but will, and to invite readers to inhabit that future now. On a much more cosmic scale, that’s an argument Christians make regularly, and can appreciate.

We too say the quiet part aloud.