Work may not be as certain as death and taxes, but it has been around longer. Just read Genesis 1. From the beginning of human existence, it was part of what God made us to do. Work is a blessing—few things are as fulfilling as a job well done. And yet it can also feel like a curse—how many people do you know who hate their job?

If you’d like a better handle on the pleasures and pains of work, a good place to start would be Work and Our Labor in the Lord by James Hamilton, professor of biblical theology at The Southern Baptist Theological Seminary and preaching pastor at Kenwood Baptist Church in Louisville, Kentucky.

Work and Our Labor in the Lord consists of four main chapters bracketed by an introduction and a conclusion.

In the introduction, Hamilton sets the agenda, defining biblical theology as “the attempt to understand and embrace the interpretive perspective of the biblical authors” (11). He then sets forth three “guiding questions” for the biblical authors that the main chapters address (12):

The four chapters then look at work in light of Scripture’s four main plot points: 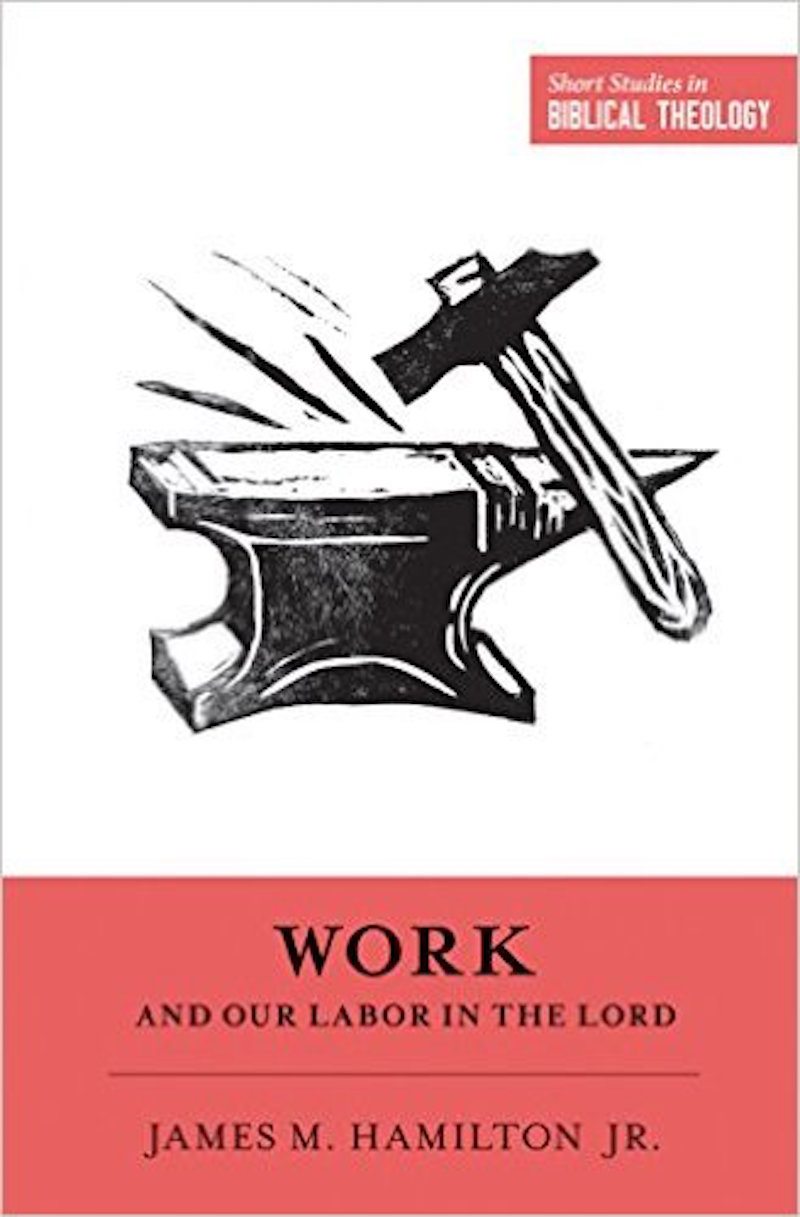 If you think of biblical theology as bare storytelling shorn of imperatives—something in tension (if not flatly at odds) with practical instruction—then you might be intrigued by a book claiming to be a biblical theology of work!

Hamilton makes it clear upfront that even though biblical theology methodologically follows the events of the redemptive-historical timeline, it need not (and should not) deal exclusively with those events (12–13). The Bible may be a narrative, but it contains more than just narrative. Any biblical theologian worth his salt will have to go “offline,” then, if he’s to truly “embrace the interpretive perspective of the biblical authors.” Hamilton comments:

In our consideration of the topic of work we have gone off-line—off the salvation-historical storyline, anyway—in that we are not examining events in sequence. We considered old-covenant wisdom literature in chapter 2, and here in chapter 3 our attention is focused mainly on Pauline instruction . . . God first redeems his people, then he instructs them on how they are to live. (70)

To pursue biblical theology as the interpretive perspective of the biblical authors when considering narrative literature includes asking what those authors meant to promote and what they meant to discourage. (56)

It’s no accident this statement comes immediately before a section in which he presents Joseph, Hezekiah, Daniel, and Ruth as examples for Christians to imitate (57–66). Hamilton’s work here can serve as a helpful corrective to biblical theologians who eschew all such exemplary preaching as empty moralism.

Restoration and the Cultural Mandate

Of all the chapters in this excellent book, the one that left me with the most questions was the chapter on restoration. Perhaps this is to be expected. Hamilton acknowledges we’re seeing through a glass darkly here (91). Still, a couple of questions are worth raising.

First, Hamilton seems to view our work in the age to come as a return to the original cultural mandate. He says things like:

The point is not that when the seed of the woman triumphs over the serpent, man will be relieved from work altogether, but rather that God’s judgment on man’s work will be removed. God made man with a task. Man was made to fill the earth, subdue it, and exercise dominion. Man was made to work. (38–39)

Jesus will come and make it so that mankind can do the work in the world that God created us to do. (101)

We needn’t dispute that the new earth will be a place of activity, even of work. But I wonder how accurate it is to view our future work as carrying on the original cultural mandate. At the very least, we’d have to acknowledge some major discontinuities. For instance, Hamilton points out that “man was made to fill the earth.” In the original mandate, we did that through marriage and procreation (Gen. 1:28), whereas in the age to come we neither marry nor are given in marriage (Luke 20:34–36). So if our future work involves “filling the earth,” it won’t be through the original means. There are clear discontinuities.

But more than that, these discontinuities raise the question: Will not the cultural mandate have already been fulfilled by the last Adam? Without inquiring into the cultural mandate’s current status in light of Christ’s work “already,” will it not be fully realized when he comes and performs the “not yet”? Will not the earth then be finally subdued? Will it not then be filled with the knowledge of the Lord? If not then, then when?

Hamilton seems to say yes to these questions (100). But if Christ has finally made the world what Adam failed to make it, then it would seem that whatever work we do after that can’t be parallel with Adam’s.

Rather, the work we do then will be work transfigured. Work transformed. Work after the original work is done. Work that eye has not seen, ear has not heard, and calloused hands have not touched. To borrow a phrase from Hamilton, we could call it “new work” (91).

At any rate, I’d like to have seen a little more wrestling with how work and rest co-exist in the new earth. I agree the two concepts aren’t mutually exclusive. But in this age at least, work and rest seem distinct enough that God can command Israel to work six days and rest for one, and root this in the pre-Fall reality that God worked six days and rested for one (Gen. 2:1–2; Exod. 20:8–11). So will the age to come be more like a Sabbath rest or a normal week’s work minus the sweat? Or something else?

On a related note, absent from the book is any discussion of the Sabbath. I realize you can’t say everything in a short study. But it would be hard to imagine Richard Gaffin or Sinclair Ferguson omitting such a key ingredient in the Bible’s storyline on work. And though I wouldn’t expect Hamilton to share their understanding of the Sabbath, still, in a biblical theology of work, I can’t help but regard this as a shortcoming.

In the end, these lingering questions are minor flaws. The book is full of solid exposition and pointed application. The trajectory of this new series is promising, as Crossway continues to assemble a lineup of quality biblical theologians.

Hamilton’s passion for and ability to communicate the Bible’s big picture make Work and Our Labor in the Lord a pleasure to read. Not always easy—still work. But never toil.