In 1987, George Michael announced, “I gotta have faith.” Needing some time off from the emotions of failed romance, Michael left those feelings, turning instead to faith as a seemingly dispassionate trust that everything would work out in the end. Although all Christians certainly disagree with Michael’s understanding of faith for numerous reasons, John Piper would also take issue with the idea that faith could be used to step away from any emotions. In his view, faith is “affectional,” not only having an inherent connection to our emotions but in some ways being constituted by them.

Piper’s most recent book, What Is Saving Faith?: Reflections on Receiving Christ as a Treasure, seeks to define saving faith and how it relates to our experience of being saved by Jesus. Piper argues for his “affectional” understanding of saving faith, meaning faith has an inherent emotional quality needed to make it saving. Specifically, treasuring Christ is an affectional “act of faith,” not in the sense of an action that results from faith, but as one of the “actings that constitute what faith is” (64n9). So, love for Christ that finds satisfaction in him, although not exhaustively identical to faith, is an aspect of faith’s nature. This claim that faith is affectional, namely in treasuring Christ, is Piper’s primary argument and the focus of this review. 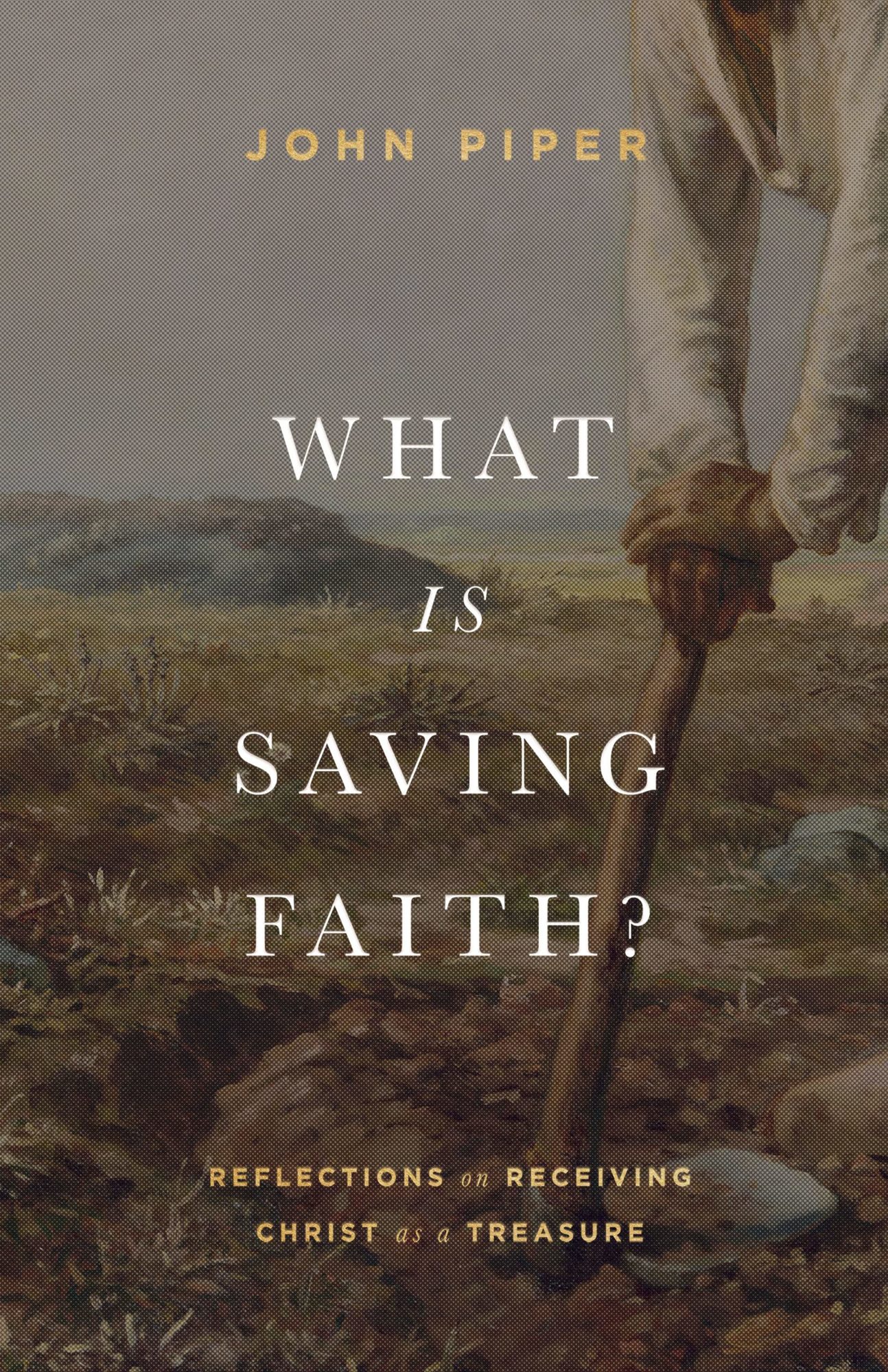 What Is Saving Faith?: Reflections on Receiving Christ as a Treasure

What Is Saving Faith?: Reflections on Receiving Christ as a Treasure

What happens in the heart when it experiences real saving faith? John Piper argues that faith in Christ is not saving unless it includes an “affectional dimension of treasuring Christ.” Nor is God glorified as he ought to be unless he is treasured in being trusted. Saving faith in Jesus Christ welcomes him forever as our supreme and inexhaustible pleasure.

Piper himself acknowledges that his main argument is controversial. Given that most of his readers come from the Reformed heritage, his claim that its traditional description of faith as knowledge, assent, and trust is inadequate—needing to be supplemented with this affectional dimension—unsurprisingly prompts resistance. Since Piper knows he’s being controversial, that I have pushback against his primary argument is not provocative but respectful. I’ve often learned from John Piper and believe that he wouldn’t feel honored by slavish acceptance of his position if biblical texts convince me otherwise. With trepidation then, I respectfully note several reservations about the idea that affections are constitutive of faith as Piper has described.

How Is Love Necessary?

Before diving into those reservations, a caveat is warranted. If Piper’s book had contended simply that believers treasure Christ, nobody would raise an eyebrow. Nothing is controversial about asserting that Christians must have a growing love for Christ, as Paul wrote: “If anyone has no love for the Lord, let him be accursed” (1 Cor. 16:22).

If Piper’s point was that treasuring Christ is intrinsically and necessarily related to faith, little could be said other than “Amen.” Faith certainly has a necessary connection to our affections, at least as fruit and evidence. Piper’s specific claim warranting response is that affections are constitutive of faith and make faith saving.

My first reservation is with the issues that drive Piper to reconstrue the Reformation understanding of faith as also affectional. Piper’s worries all derive from movements outside the Reformation heritage, suggesting that it’s an unwarranted and perhaps a strange approach to revise Reformation doctrine in response to unorthodox doctrine.

Faith certainly has a necessary connection to our affections, but Piper claims affections are constitutive of faith.

First, Reformed theologians roundly rejected dispensationalism’s lordship controversy as antinomian. Second, no Reformation thinker argues that faith is a mere decision within a sinner’s ability, as if God is not sovereign in effectual calling and regeneration. Third, Piper’s concern about Robert Sandeman’s view of faith as “bare assent” regarding Christ’s work has no traction for Reformation Christians, since his view falls within an unorthodox paradigm of rejecting justification on the basis of Christ’s imputed righteousness. In this respect, all three driving concerns are outside mainstream Reformation theology.

Piper’s concrete examples of his concerns only exacerbate my reservations. He recalls how he has seen many drug dealers and prostitutes “receive Christ” (141). I assume he means they’ve received Christ without accompanying repentance. No group of elders shepherding a church of Reformation heritage would recognize this as a credible profession of faith, a category lacking from Piper’s presentation. His concerns have pushed him to include affections into faith itself, but pastors and elders have long considered a renewed life and affections as part of the criteria for evaluating whether someone’s faith is genuine when they seek church membership.

Because of Piper’s definition of acts of faith as constitutive aspects of faith, rather than its effects or results, very few if any of his historical citations support his point. Certainly they include his phrases, but they usually discuss affectional acts of faith as the results of faith.

The major—and expected—exception is Jonathan Edwards, whose view of faith no doubt stands behind Piper’s approach to this issue. Edwards believed that love is at the heart of faith: “That even faith, or a steadfastly believing the truth, arises from a principle of love.”

Although Piper denounces some of what he sees to be unfortunate expressions in Edwards’s theology, he can’t completely escape the difficulties in Edwards’s doctrine of faith when he appropriates it—as he notes some of his critics have already brought to his attention (24n11, 283).

By trying to draw heavily upon Edwards’s highly affectional theology, Piper encounters a host of complexities for the doctrine of justification by faith alone, which is precisely why he continually has to try to qualify and clarify his understanding of justification throughout this book. Those complexities that risk endangering justification by faith alone include a view of faith that comes close to a faith formed by love for justification (which is the Roman Catholic view), a confusion of the transformation that belongs to sanctification with the trust in Christ that is at faith’s heart unto justification for the ungodly, and a blurring of faith’s fruits and evidence with what makes it saving—traditionally understood by its object, Jesus Christ, rather than one of its subjective aspects or effects. The success of Piper’s qualifications and clarifications is beyond the scope of this review.

More importantly, it seems Piper often reads his affectional view into his exegesis of biblical texts. Concerning how 1 John 5:1–5 teaches that faith overcomes the world, Piper argues that this means faith includes new affections for Christ that remove the burden from obedience to God rather than to the world. A more straightforward way to understand this passage—without introducing ultimately modern psychological categories—is that John meant that faith overcomes the world by tying us to Christ, crucifying us with him, so that the law is objectively no longer a burden as a condition for everlasting life, freeing us to keep it with joyful gratitude.

Piper’s understanding of Hebrews 12:1–3, in which he argues that Christ is the example of affectional faith, is problematic. If the object of joy is the object of faith, we would be the object of Christ’s faith since having a redeemed people is the object of his joy. Even leaving aside the differences between Christ’s faith and ours, surely Christ is not trusting in us. Piper’s argument also falters on a few clear passages. Although in his conclusion he cites 1 Corinthians 13:13, saying that faith, hope, and love all abide, Paul clearly said it’s love that never ends (1 Cor. 13:8). The three abide in this age, but love is forever. This distinction seems clear in 2 Corinthians 5:6–9, since now we live by faith, not sight, while away from the Lord, suggesting that faith will one day give way to sight. If love is constitutive of faith as treasuring Christ in the manner Piper suggests, then when faith is fulfilled, treasuring Christ would disappear. This cannot be.

Certainly, Piper would reject this implication, highlighting that love remains. But when treasuring Christ is faith, this implication cannot be avoided without reworking the argument’s whole premise to apply treasuring love in a different way—not as its fundamental role as faith’s savingly constitutive aspect—in everlasting life. A far simpler explanation joins love and treasuring Christ to faith as a necessary accompaniment rather than as a constitutive aspect.

That last point leads us to some final concluding thoughts. Piper isn’t alone in his desire to see that Christians appreciate Christ as their Savior, having a thriving love for him. Pastors across the world, myself included, long to see our church members deeply treasuring Christ. A question, however, needs to be raised about the prospect of growth in the Christian life. Scripture, after all, describes our union with Christ like a marriage. In a human marriage, love and affection for one another, when all goes as it should, increases and deepens over time. This increase is part of how marriages strengthen and develop. This growth facilitates deeper communion with one another as years pass by and as you endure things together. I wonder where this dynamic figures into Piper’s understanding of affectional faith.

Piper’s view can easily demand a radically mature relationship with God from its very start, rather than allowing for growth over time.

This is crucial because, just as the Scripture is clear about faith’s importance, it’s also clear about continuing to grow in our walk with Christ, putting on new measures of godliness. Piper’s view can easily demand a radically mature relationship from its very start, namely by demanding the type of affections that are meant to accompany faith but grow and increase over time be fully present from its inception. When Piper addressed sanctification in Future Grace (read the Themelios review), the same affectional demand was present there, yet the prospect of progressive growth in our life of godliness didn’t feature prominently there or in this newest book. Rather, the attention was on what affection we need to have now to overcome temptation in the present moment.

Although this is not wholly inaccurate, believers often need help taking steps in sanctification, frequently failing most when they perceive sanctification to be “all or nothing” rather than progressive. We need more focus on helping people grow in the Christian life. Teaching about growth fans the flames of affections, helping people focus on Christ more than on how they feel, seeing his beauty rather than questioning how well they’re thinking about his beauty, and prompting them to thrive in treasuring him up richly in their hearts.

Harrison Perkins (PhD, Queen’s University Belfast) is pastor at Oakland Hills Community Church (OPC), a visiting lecturer in systematic theology at Edinburgh Theological Seminary, and online faculty in church history for Westminster Theological Seminary. He is the author of Catholicity and the Covenant of Works: James Ussher and the Reformed Tradition, numerous journal articles, and regular blog posts at Modern Reformation and the Heidelblog. He is married to Sarah, and they have one son, Scott.