Perhaps what the world needs now is an old book by a dead man. The book I’m thinking of is The Uneasy Conscience of Modern Fundamentalism. This slim volume by Carl F. H. Henry was first published in the whirling years after World War II when America’s evangelical movement—exemplified by young North Carolina evangelist Billy Graham—seemed ready to move beyond both the bureaucratic heterodoxy of mainline liberalism and the quarrelsome anger of separatist fundamentalism.

What’s striking now is how contemporary and pressing the issues Henry raised still seem, though he wrote when “baby boomer” referred to youth and the future. In this, his most important and prophetic book, Henry addresses not just the mind but the conscience.

While not specifically mentioned in this book, the visage of Jim Crow lingered in the shadows of that era. Nearly 20 years later, another Christian thinker, Walker Percy, would write,

It is surely not too much to say that if Southern Christendom does not soon demonstrate the relevance of its theology to the single great burning social issue in American life, it runs the risk of becoming ever more what it in fact to a degree already is, the pleasant Sunday lodge of conservative Southern businessmen which offends no one and which no one takes seriously. 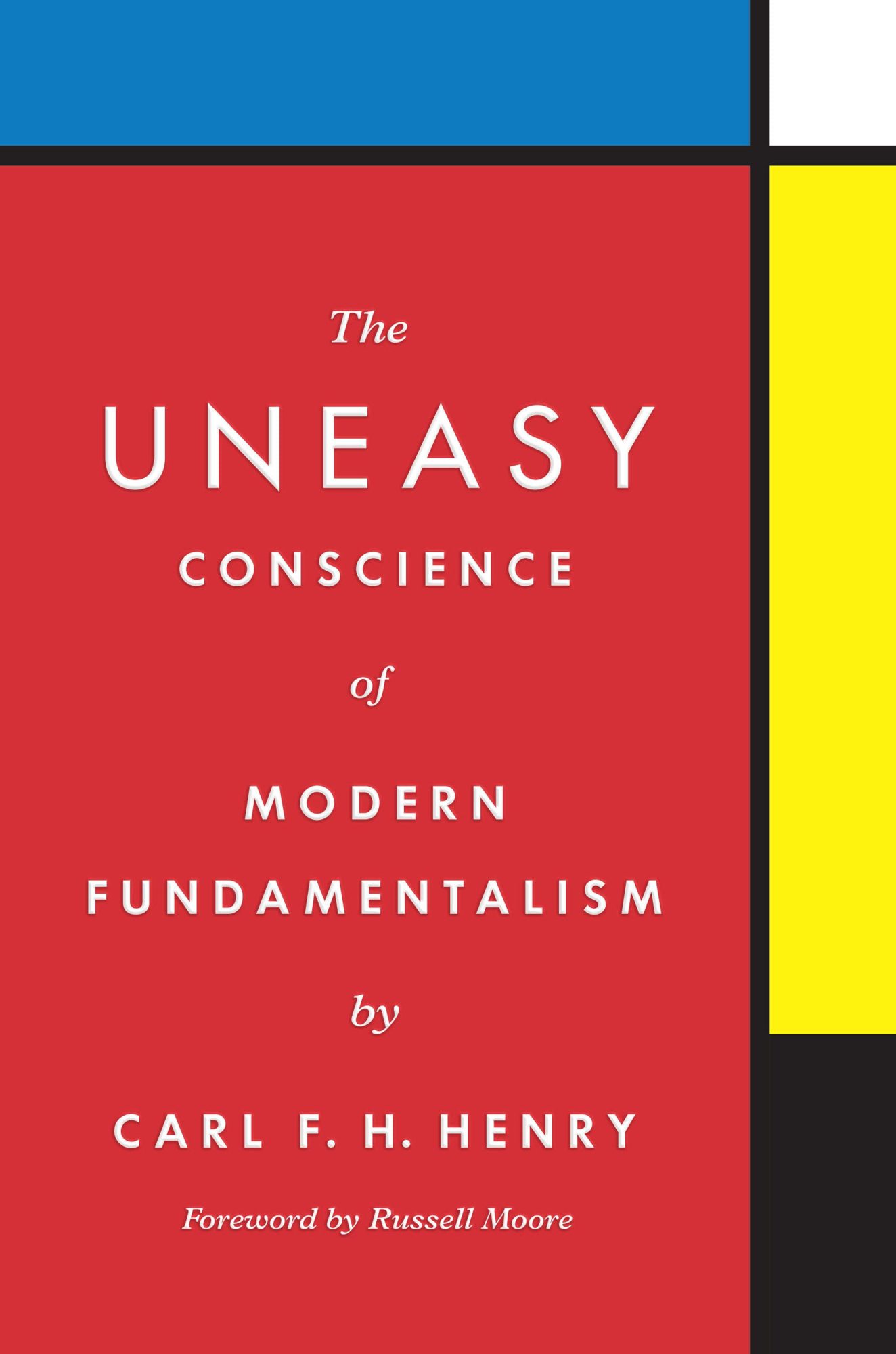 The Uneasy Conscience of Modern Fundamentalism

The Uneasy Conscience of Modern Fundamentalism

As social problems including prejudice, classism, and war dominated conversations in the 1940s, orthodox Christians became known for their indifference rather than compassionate leadership around the issues. If the gospel has the power to change the world, shouldn’t Christians engage in global matters with biblical authority?

In The Uneasy Conscience of Modern Fundamentalism, theologian Carl F. H. Henry critiques separatist evangelicals and their absence from the social arena, calling on all Christians to unite humanitarianism with Christ-centered leadership to impact the kingdom of God. With cultural and political analysis that is still timely today, he inspires believers to reject pessimism about the human condition and embrace action, responding to global needs and pointing to Christ as the ultimate solution for every social ill.

This classic book from Carl F. H. Henry, a prominent figure in evangelicalism, has been updated with a foreword by Russell Moore.

Both in terms of national geography and his general approach, Henry argued much the same thing. His argument wasn’t that the church must become relevant to the masses, as a marketing strategy. It’s always an easier mission to avoid disturbing the consciences of those who want to “sin [all the more] that grace may abound” (Rom. 6:1). No, the relevance of Henry’s message was that any serious person who dared look could see that when Christians dodged issues of prejudice, classism, and war, they were dodging not just social questions but their own Scriptures, which state explicitly that God wants no worship from those who unrepentantly practice injustice or who applaud those who do (Isa. 1:10–23; James 5:1–10).

Any serious person who dared look could see that when Christians dodged issues of prejudice, classism, and war, they were dodging not just social questions but their own Scriptures.

The outside world could see that a church that thundered against sin in the personal arena and not against sin in the social arena—when the church’s own Bible makes no such distinction—was a church that, no matter how loudly it proclaimed Scripture’s inerrancy, had adopted a canon within the canon, with some parts more authoritative than others. In other words, the so-called fundamentalists were often as theologically liberal as the liberals, because they adapted their Bible to fit their social and political stances, rather than the other way around.

Whether that was, to use more contemporary terms, “red state” or “blue state” ways of doing this would be irrelevant both at the last judgment and in the eyes of a world wondering whether there was a word from God, whether the people in the revival tents really believed it when they said, “The Bible says . . .”

For Henry, the problem wasn’t one of mere application but of failure to conform to the defining and unifying theme of the Bible: the kingdom of God in Jesus Christ. Social-gospel liberalism had replaced the kingdom with a political program, deemphasizing the necessity of personal regeneration as it churned out policy papers on nuclear energy and economic stimulus.

At the other extreme, the so-called fundamentalists had overreacted to the social gospel, speaking of God’s kingdom as though it were wholly future. These Christians embraced a merely “spiritual” mission for the church, defining “spiritual” as evangelism and personal morality. These Christians acted as though Jesus could be received as Savior without following his command to love neighbor as self.

That’s why some Christians could speak loudly on some social issues—opposing communism abroad or supporting prayer in public schools—while denouncing other issues as “political” and “distractions from the gospel” when they didn’t fit their preexisting political, economic, and cultural interests. Most of the issues that were “distractions”—then as now— happened to be about race.

The danger was not just that this chopped-apart kingdom theology would hurt people on the outside—though it certainly did that—but also that it would create spiritual and moral injury in the Christians saying such things themselves. After all, you can ignore the Bible on such matters if you just choose to concentrate on passages that deal with individual justification and atonement while relegating the teachings of Jesus and the prophets—and even some of Paul and James—to the Israel of the past or the Israel of the future, with no connection to the church now.

Henry called the embedded conscience “the criteria by which God would judge men and nations.” That conscience—like the Bible it reflects—points to a God of both justice and justification. Rather than searing the conscience, Henry proposed that gospel Christians hear what they were already saying, that “all Scripture is breathed out by God” (2 Tim. 3:16). That would require Christians seek a kingdom that speaks both to cosmos and person, community and individual, body and soul, faith and obedience, mind and conscience, to love of God and love of neighbor.

If only the issues Henry raised in this book were in the past. Many called Henry—who was well to the right on virtually every theological, political, and ideological spectrum—a “Marxist” who dabbled with a “social gospel,” though he was perhaps the most theologically detailed critic of the social gospel.

Such should not be surprising. Those same forces labeled Christian abolitionists as “Unitarians” and “liberals,” because they agreed with the Bible (and some Unitarians and liberals) that kidnapping human beings and forcing them into chattel slavery, violence, and rape was evil. Today, those who suggest that the coming judgment applies to matters of injustice such as white supremacy will be called “liberals” or “cultural Marxists” again. It will be suggested that they’re influenced by postmodern critical theory rather than what they’re actually referencing: the text of, for example, Ephesians 3 or Revelation 5.

Henry proposed that gospel Christians seek a kingdom that speaks both to cosmos and person, community and individual, body and soul, faith and obedience, mind and conscience, to love of God and love of neighbor.

This is perhaps the one place where The Uneasy Conscience falters. Henry was, whatever his protests to the contrary, a rationalist who assumed the primary problem was cognitive. He thought people had wrong ideas about God’s kingdom that led to an atrophied form of social engagement. Over time, I’ve come to believe that the flow works in the reverse—whether in the chilling defenses of slavery in the 1840s, the waving away of lynching in the 1920s, the “biblical support” for segregation in the 1960s, or more recent examples. Instead, the social issues are predominant, and the theology serves to prop it up.

Henry seemed to know this was the case at some level. Decades before Mark Noll, he knew there was a “scandal of the evangelical mind.” But he chose to address not only the mind but also the conscience. And he did so with the very words Jesus spoke on the shores of Galilee: “The time is fulfilled, and the kingdom of God is at hand; repent and believe in the gospel” (Mark 1:15).

That’s a word the church—in every place and at every time—needs to hear. Every generation or so, we need a reminder of how the conscience can work to evade God’s clear Word. We need that reminder now as much as ever. The evangelical conscience is, after all these years, still uneasy.

Content adapted from the foreword to The Uneasy Conscience of Modern Fundamentalism by Carl F. H. Henry, ©2022. Used by permission of Crossway, a publishing ministry of Good News Publishers.