In The Transforming Power of the Gospel, Jerry Bridges picks up on many of the themes advocated in several of his popular books from a generation ago regarding the nature of Christian sanctification. The book’s focus is the role of the gospel and the agency of the Holy Spirit in the spiritual transformation of believers into the image of Christ. It is divided into two sections, the first dealing with the gospel and the second with the Spirit. Bridges argues that our natural sinful tendency is to base not only our relationship with God on our performance, but also spiritual growth on our willpower: thus our need for both the justifying grace of Christ as well as the empowering help of the Spirit. As he puts it, “the righteousness of Christ and the power of the Holy Spirit are the two foundational stones upon which spiritual transformation is built” (180). The emphasis on the Spirit—especially his monergistic work in the believer (cf. 102)—is in my opinion the book’s greatest strength.

What This Book Is and What It Is Not

Readers should be aware of the kind of book The Transforming Power of the Gospel is. First, it is devotional and constructive in nature. Readers who hope for analysis of the finer points of dispute within the Reformed tradition on questions of sanctification will be disappointed. For example, while readers will be exhorted regarding the importance of grace-driven effort from Bridges’s book (especially in chapter 9), they will not be instructed more specifically on the precise nature of this effort, and how it relates to the gospel of grace (issues currently being contested in the blogosphere). On the other hand, readers who are looking for a sound and reliable explication of a gospel-centered approach to spiritual transformation that they could use for a Bible study (note the helpful discussion questions at the end of each chapter), or give to their new Christian friend or unbelieving neighbor, or read alongside their morning devotions for their own edification, will be well served by this book.

Second, this book is not a mere recapitulation of Bridges’s earlier works. It has several new emphases, the most noticeable and significant of which is perhaps the emphasis on the role of the Holy Spirit in sanctification (Bridges outlines four ways in which this work differs from previous works here). However, as the book represents the “written form” of a two-day seminar Bridges has developed throughout his speaking career (9), it should neither be thought of as a sort of “final statement” of Bridges’s views on this topic, drawing the best of his earlier insights together in a final, comprehensive presentation. If one were to read only one Bridges book, I wonder if The Pursuit of Holiness would be the best overall choice for most readers. Then Amazing Grace. Then again, reading them all would not be a waste of time! 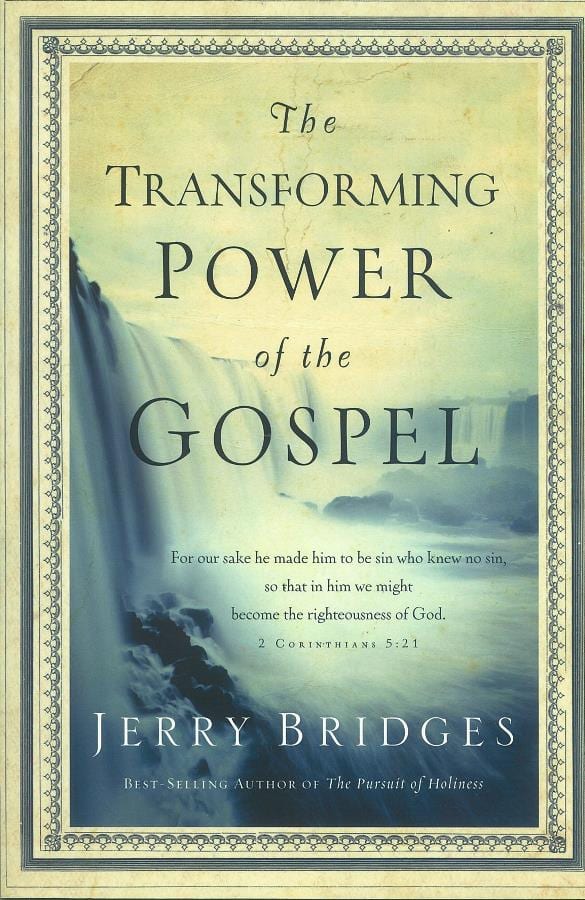 The Transforming Power of the Gospel

The Transforming Power of the Gospel

The apostle Paul writes that we are to be transformed, but for many Christians, figuring out how to approach spiritual transformation can be elusive. Best-selling author Jerry Bridges helps us understand that we have available to us the ultimate power source for true spiritual growth: the gospel.

Finally, the book is written from a distinctly Reformed perspective. Readers hoping to ground themselves in a Reformed and gospel-centered approach to sanctification, or learn what such an approach is, will be well-served by this book. It is steeped not only with Scripture, but also with helpful quotes from theologians like John Owen, Stephen Charnock, George Smeaton, William Plumer, J. C. Ryle, Archibald Alexander, and James Buchanan. Bridges has drawn together the best of this tradition in his presentation. This is not the book, however, for readers who are looking for a more comprehensive treatment of Christian thought on sanctification, engaging with all of church history and demonstrating how a Reformed approach relates to other views.

Gospel-Centeredness Has Been Around Longer Than the Reformation

A minor weakness of the book in this respect may be that on two occasions (10, 128) Bridges seems to state that the power of the gospel for spiritual growth has been recognized only since the time of the Reformation, and all of his interaction with church history is limited to Reformation or post-Reformation thought (unless I missed something; I could not confirm this without rereading the book because there is no index). I share Bridges’s Reformed perspective, but I do not believe that the power of the gospel in spiritual growth was completely obscured during the first millennium and a half of church history, and I think Bridges’s overall case would have greater credibility and influence if it were more clearly seen in continuity with the entire Christian stream, not just the Reformed tradition.