R. T. Kendall anticipated controversy when the title Totally Forgiving God: When It Seems He Has Betrayed You was first suggested. He shares:

A few years ago, a very dear friend of mine said, “RT, I know what should be the title of your next book.” “What is that?” I asked. “Totally Forgiving God,” he replied. “Oh dear,” I swallowed. My immediate thought, I am ashamed to admit, was about what the critics will say when they see the title but won’t read the book (xxiii).

Now enter the critic, I suppose. But I want to assure Kendall, prolific author and former pastor of Westminster Chapel in London, that the review offered here isn’t the work of the critic he feared. I write as a brother in Christ, and I have interacted with Kendall’s insights. Yet as Kendall predicted, I do have questions about his title—not to mention his thesis. Indeed, the central question I wish to address in this review is whether or not it is appropriate to forgive God.

Before moving to the heart of the matter, several strengths of Totally Forgiving God should be acknowledged. Reading it, one quickly appreciates Kendall’s pastoral warmth. He states that it is his goal to “uphold the God of the Bible as faithfully as I can while also sharing with you some of the things I have learned and observed” (15). He wants to help readers move from being upset with God to being in the place of Habakkuk (see Hab. 3:17-18) (222). With that goal in mind, Kendall transparently shares the pain of losing his mother when he was still a teenager. His concern for others experiencing such pain comes through. As a fellow shepherd, I truly appreciate Kendall’s pastoral heart.

Another strength of the book is that Kendall adamantly rejects the notion that our pain results from mistakes made by God. More than once, Kendall stresses that God is blameless (3, 7). In the context of his own mother’s death, he quotes his father as saying, “God is too wise to err and too kind to be unmerciful.” Kendall writes of his father’s counsel, “I believed that then, and I believe it today” (3).

Kendall is also to be commended for explicitly rejecting open theism:

According to open theism, not only do we influence [God], but also this God depends on input from us to know what to do next! One of the leading proponents of this theology actually acknowledged publicly that this God may not even win in the end! In any case, if you adopt this kind of God, you can be sure you would not have a need to forgive him for anything; he doesn’t even know any more than you do! (203)

If you only skimmed Kendall’s previous quote on open theism, it’s worth reading again for two reasons. First, it highlights Kendall’s insistence that God is sovereign. Yet Kendall’s criticism of open theism also illustrates the curious logic he follows when concluding that it is appropriate for people to forgive God. Kendall reasons:

If you find yourself scratching your head trying to follow Kendall’s argument, you are not alone. Isn’t the exact opposite true? A limited god would need forgiving, not a sovereign, perfect God. How could Kendall possibly conclude that it is up to people to let God off the hook?

Kendall insists that it is appropriate to “let God off the hook,” that is, to forgive God, because he defines forgiveness as a matter of private feelings. Forgiveness does not necessarily have anything to do with moral culpability. This being the case, an appropriate way to move beyond being angry with God is to forgive him. Kendall writes:

Total forgiveness means letting everyone who has hurt us in any way off the hook. This includes God if we feel he has hurt us by allowing what he did (179, emphasis his).

Notice the word “feel.” If you feel that God has hurt you, then forgive him.

Smedes’s therapeutic forgiveness, manifested both in its excessive internalization and its bypassing of issues of sin and culpability, find its reduction ad absurdum when he suggests that we not only can but indeed ought to forgive God. It does not matter that God is not culpable; what matters are my own feelings and health (Jones, Embodying Forgiveness [Grand Rapids: Eerdmans, 1995], 52).

Of course, this is exactly the trajectory that Kendall follows in Totally Forgiving God. 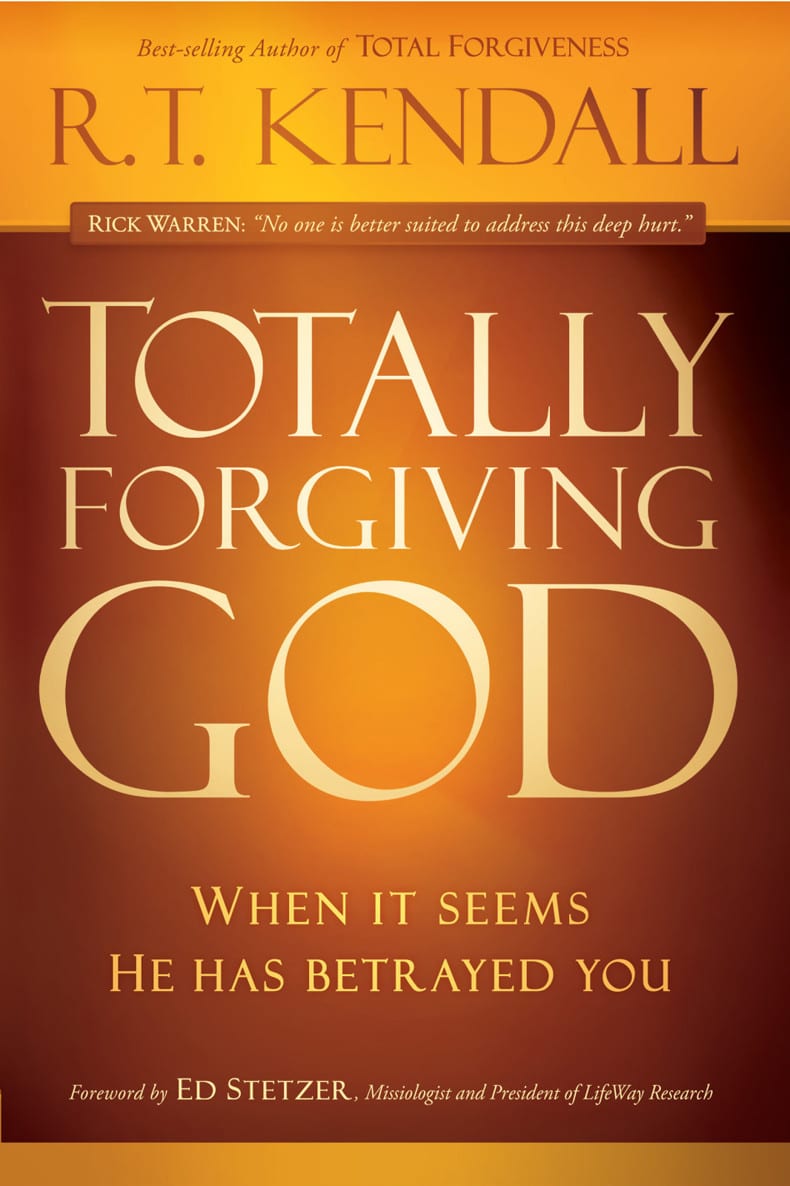 Totally Forgiving God: When It Seems He Has Betrayed You

Totally Forgiving God: When It Seems He Has Betrayed You

Charisma House (2012). 256 pp.
We live in a world filled with injustice and evil, and there is nobody on the planet who has not suffered. There are famines and wars, earthquakes and tsunamis, wicked governments, racial prejudices, and diseases. We all have been hurt, attacked, mistreated, deceived, or falsely accused. God allows this. He could stop it. After all, he is unlimited in power and knowledge. But God doesn’t stop it. Why? In the third title of his series on forgiveness and his most important book to date, R. T. Kendall tackles this question head-on, demonstrating why we need to release God from the blame we put on him when we feel he has betrayed us.
Charisma House (2012). 256 pp.

Someone may counter, “Is it not a good thing to stop feeling angry with God?” The answer to that question is, “It depends.” It is not a good thing if we we forsake our anger by forgiving God.

Forgiving God implies that he is somehow morally culpable. While Kendall goes to great lengths to argue this is not what he means, he recognizes the implication. The implication of culpability is why, when someone first suggested the title, he swallowed and said, “Oh dear.”

God does not need to be pardoned of any wrongdoing. And when people say they forgive God, there is clear implication of blame—regardless of whether we claim to do so without that intent (see Brauns, Unpacking Forgiveness, 67).

Likewise, Ed Stetzer, who wrote the foreword to Totally Forgiving God, also conceded that the idea of forgiving God would be “sure to ruffle some feathers.” Stetzer went on to say, “But the point here is so clear: God is perfect, and just yet our hearts often hold bitterness toward him—and we need to let that bitterness go and trust God (xvii).”

Stetzer is correct that Kendall repeatedly insists that he doesn’t believe God makes mistakes. However, I would not accept that Kendall clarifies how bitter people should properly process their pain. Rather, Kendall takes a term of critical importance—forgiveness—and eviscerates it of its biblical meaning. There may be a time to ruffle someone’s feathers, but not if you’re ruffling the feathers of the One who gathers us under his wings (Ps. 91:4).

Elsewhere I have written an overview of biblical words on forgiveness. Here space only permits us to consider Colossians 1:13–14:

He has delivered us from the domain of darkness and transferred us to the kingdom of his beloved Son, in whom we have redemption, the forgiveness of sins.

Biblical forgiveness has everything to do with moral culpability (cf. 1 John 1:9–10). It’s about the remission of sins. However, Kendall reduces forgiveness to a feeling and empties this important word of its biblical meaning.

Those who struggle with anger toward God should be pastorally encouraged to work through the book of Job. If they do so prayerfully, by the time they reach chapter 38 they’ll be ready to hear the Lord speak to them out of the whirlwind of his exalted greatness. Surely anyone who plunges into Job 38 will not return thinking it is necessary to “let God off the hook”!

Another Other Area of Concern

Throughout Totally Forgiving God, Kendall creates a muddled picture of how God reveals himself. Kendall describes numerous times when God spoke to him or others through visions that turned out to be inaccurate. For example, God revealed to Kendall and others that his mother would be healed, and yet she was not (2).

At another point, Kendall summarizes a series of visions God gave him, some of which were not fulfilled:

Visions. They all came to me unsought and seemed equally credible. They were not dreams, by the way; they were open visions. If they weren’t of God, you could have fooled me! They were absolutely real. And yet some were literally fulfilled; others were not. Why? (56–57)

This is not the place to write a treatise on special revelation. But if Kendall is going to use such examples, he owes his readers more of an explanation. Does he believe all Christians should expect to hear from God through visions? Were his visions from God or weren’t they? Does he believe that God sent him misleading visions?

God Does Not Make Mistakes

One final time, let me stress that Kendall is very careful to insist that God does not make mistakes. It would be unfair to omit that point. However, this book that speaks often of a “totally forgiving God” and of “letting God off the hook” will imply to many that God is somehow culpable. In the end, such therapeutic, unconditional forgiveness creates far more problems than it solves.

Few would deny the need for Christian books that encourage those experiencing disappointment. But given the concerns outlined here, I would not recommend Totally Forgiving God. Those who struggle with anger and disappointment would be better served by reading Jerry Bridges’s Trusting God: Even When Life Hurts or, for an academic treatment of therapeutic forgiveness, Jones’s Embodying Forgiveness: A Theological Analysis.

Chris Brauns is the pastor of The Red Brick Church in Stillman Valley, Illinois. He is the author of Unpacking Forgiveness: Biblical Answers for Complex Questions and Deep Wounds, Bound Together: How We Are Tied to Others in Good and Bad Choices, and When the Word Leads Your Pastoral Search: Biblical Principle and Practices to Guide Your Search. Chris blogs at A Brick in the Valley.