Help TGC equip believers to stay strong in the gospel in a dramatically changing culture.

It took only three days to write, but almost 50 years later Tortured for Christ is an enduring book read around the world. The classic by Richard Wurmbrand (1909–2001), a Romanian Jew turned pastor and founder of The Voice of the Martyrs, has been published in 65 languages.

What drives the slender 170-page bestselling work a half-century later? Quite simply, the suffering that preceded it.

Wurmbrand grew up orphaned and poor in Romania and by age 14 was a convinced atheist. He recalls, “It was not just that I did not believe in God or Christ—I hated these notions.”

But the committed non-believer kept having encounters with God’s people. On a visit to a mountain village, Wurmbrand met an elderly carpenter who gave him a Bible. Unbeknownst to Wurmbrand, the carpenter and his wife had been praying to meet and convert a Jew, and would go on praying for hours at a time for the young Wurmbrand. “The Bible he gave me was written not so much in words, but in flames of love fired by his prayers,” he recounts of his conversion that followed.

Wurmbrand the Christian became an evangelist to fellow Jews in Bucharest, later an Anglican priest, and then after World War II a Lutheran pastor. During the war he and his wife, Sabina, preached in bomb shelters and rescued Jewish children from the ghettos. “The Nazi terror was great,” he wrote, “but only a taste of what was to come under the Communists.”

With the Soviet Union occupying his country as World War II ended, Wurmbrand discovered “the language of love and the language of seduction are the same.” At a Congress of Cults in 1945 organized by Romania’s government, 4,000 delegates chose Joseph Stalin as their honorary president. Wurmbrand watched as pastors rose to declare Communism and Christianity compatible. He took the podium instead to praise Jesus Christ and insist that he alone deserves honor and praise. “Afterward I had to pay for this,” Wurmbrand writes, “but it was worthwhile.”

By the time secret police arrested Wurmbrand on his way to church in 1948, he and his wife had distributed 1 million Gospel texts, including to Russian soldiers. For the next 15 years he would be in and out of prison, beaten and chained, and at times near death. Once released and allowed to emigrate, Wurmbrand testified before the United States Congress in 1966, stripping to his waist to reveal 18 deep scars from his jail terms. 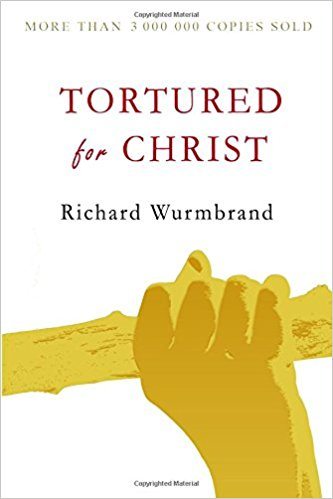 For Wurmbrand, his work was but half done. He founded The Voice of the Martyrs, an organization that advocates for persecuted Christians worldwide today. He lived to see the fall of the Berlin Wall and the breakup of the Soviet Union, and he returned to a hero’s welcome in Romania after the fall of Nicolae Ceausescu in 1989. Wurmbrand died in 2001, mere months before another ideology threatening Christians—radical Islamic terrorism—made its dramatic show on 9/11.

The rise of violent, extremist Islam has brought with it a rise in terror targeting Christians, who top the list of the world’s persecuted religions. Harassment and violence against Christians has grown, according to Pew Research Center, in both severity and scope. The number of countries with religion-related terrorism rose from 73 percent in 2013 to 82 percent in 2014. Wurmbrand’s work to expose persecution in the Communist era has global implications today.

Taking a Page from Wurmbrand

As a new Christian in the early 1980s I attended a lecture given by Wurmbrand at a church outside Washington, D.C. He seemed frail in body and remained seated on the dais throughout his talk. But when he spoke, Wurmbrand was powerful and engaging, his raspy voice testifying—as he’d done by then hundreds of times—to both profound suffering and miraculous deliverance, and to the persevering care, even joy, God gives the suffering believer. That night I bought my own slim copy of Tortured for Christ, and poured over the stories of Communist oppression met with Christian determination.

Not long after that talk, the Soviets shot down Korean Airlines flight 007 on the last leg of a flight from New York City to Seoul, killing all 269 people on board. It’s striking now to remember how far we seemed to be from the end of the Cold War, how uncertain and unsafe the world felt in the middle of that long confrontation.

Remembering Wurmbrand, though, I took heart that more was happening than grim headlines could portray. An underground church was standing against the powers of the day, staking out a claim for the gospel of Jesus Christ in a dangerous world. Hunting down the story beneath the story would one day become my own vocation, fueling years (okay, decades) of reporting for WORLD Magazine about persecuted believers around the world.

To tell those stories—whether for advocacy groups like The Voice of the Martyrs or for reporters like me—means taking a page from Wurmbrand. It means recounting the suffering without shrinking from the harsh details or political realities, and without a pretense to piety. The world’s persecutors, be they jackbooted Nazis, petty dictators, or jihadist suicide bombers, must be understood in order to be vanquished—or converted. Wurmbrand showed Christians how to take interest and engage in public issues of the day, how to hold in a taut and visible tension the worst of life on earth with the best of life in Christ.

Wurmbrand also understood the hard work of real and lasting evangelism. Conversion to Christ, he said, was “only half the work.” The convert “must be made to be a soul-winner.” Wurmbrand’s determination to turn converts into missionaries—his willingness to witness even to soldiers and those in authority—fed and grew the vast networks of underground churches that would survive 45 years of Communism in Eastern Europe and the Soviet Union.

Later in life Wurmbrand declared Tortured for Christ “has no literary value.” He acknowledged only that it was written “with pen and tears.” And that, in a nutshell, is its secret formula for success.

Mindy Belz is senior editor for World News Group and the author of They Say We Are Infidels: On the Run From ISIS With Persecuted Christians In the Middle East (Tyndale Momentum, 2016).