Just about every book ever written with the words “Catholic” and “evangelical” in the title have been primarily for pastors or academics (think Roman Catholics and Evangelicals by Norman Geisler and Ralph MacKenzie). Such books offer detailed explanations of the thorny theological differences between the two camps. But Chris Castaldo’s Talking with Catholics: A Guide for Evangelicals is different.

By different, I don’t mean Castaldo skirts our theological differences in order to make the book feel more readable or Roman Catholicism seem more palatable. It tackles a most of the issues head on, and (just as importantly) does so in a way that makes Catholics look human, not naïve, dumb, irrational, or extraterrestrial.

1. Talking with Catholics does more than just communicate (or transfer) theological information.

I’ve read my share of books about Catholics and evangelicals, and they’ve helped me to develop a theological grid for understanding Roman Catholicism. But I’m not sure how much these books helped me to grow in love. Talking with Catholics will help you do both. Castaldo, who was raised as Roman Catholic and now serves as lead pastor of New Covenant Church in Naperville, Illinois, is more than fair-minded when writing and thinking about these issues. He’s a model of generosity, grace, and love.

Castaldo is a master peacemaker, and he’s at his best in this book. If you’re a red-blooded evangelical you might be thinking, I don’t want peacemaking. I just want the truth. But there’s a problem: emotional landmines are deeply embedded in this conversation. We need more than truth to navigate these—we need grace and truth.

2. When Talking with Catholics communicates theologically, it’s done in an engaging way.

The best Christian writers have a knack for giving us enough variety to make theology interesting and enjoyable to read while simultaneously engaging us with truth. Castaldo has, it seems, an endless bag of tricks he can employ to tease out the most stubborn Catholic and evangelical issues. 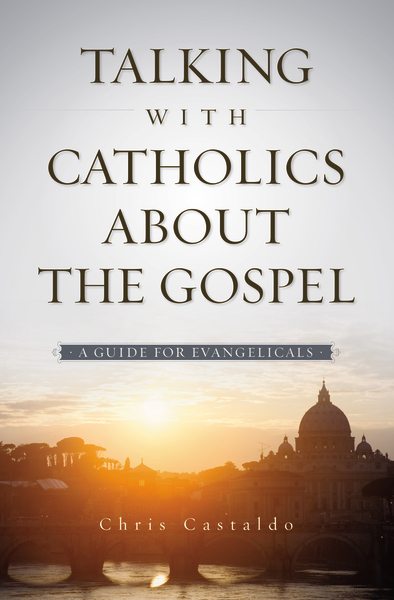 Talking with Catholics about the Gospel: A Guide for Evangelicals

Talking with Catholics about the Gospel: A Guide for Evangelicals

Whether he’s putting on his GoPro™ camera and telling a humorous autobiographical story (ch. 1), banging out some old fashioned non-fiction on his typewriter (chs. 2, 4, 5), revving up his time machine to take us on a whirlwind tour of Catholic history (ch. 6), or narrating a Letterman-esque list of the “Top 10 Questions about Catholics,” you never feel like he’s wasting words or going off on a tangent.

3. At a few points, Talking with Catholics left me wanting more.

But I would like to have seen more, for example, about understanding the Catholic Mass (this was #3 in the “Top 10 Questions about Catholics” section). Castaldo points out a common evangelical misunderstanding: Catholics teach that Christ is “physically present” in the Mass. Then he uses the Catechism of the Catholic Church to show that such a belief isn’t actually official Catholic teaching. On to the next question.

Wait a minute. Christ’s body and blood are present in the Eucharist, but he’s not “physically present” in the Mass? There’s a gap somewhere. What is a non-physical body? What kind of blood fails the test of being physical? And is there some kind of rational, biblical basis for these kinds of Catholic “mysteries”? Further explanation in some parts of the book like this would help us.

Talking with Catholics does us a valuable service when it identifies what agrees and what doesn’t agree with the official Roman Catholic teaching. But occasionally it left me alone, out in the ocean, floating with my evangelical sensibilities on a raft of apparent contradictions.

4. Talking with Catholics is an excellent guide for evangelicals.

A guide is someone who goes along with you as you travel to a new place. A guide can help give you a new grid to look at the world around you. They can give telltale signs that help you identify threats and dangers in the wild. Having a guide can help you survive.

But more than that, a guide can point you to the beauty and wonder of the place you’re visiting, making sure you don’t miss things a novice might overlook. Chris Castaldo serves as such a guide for evangelicals venturing out into Roman Catholic terrain. He’s a capable guide and a wise companion. And he’s an indispensable friend for the journey.

Tim Augustyn serves as pastor and writer for Unlocking the Bible. He is also the editor of LifeKeys Daily. He was born and raised in northern Wisconsin, came to faith in his 20s while working in the business world, and received an MDiv from Trinity International University. Tim and his wife, Janna, and their four kids live in Arlington Heights, Illinois.

1 How Do Churches End Up with Domineering Bullies for Pastors?