Why read Sydney Anglicanism: An Apology, a book defending a part of a denomination so far removed geographically from many of us? One reason is that the Anglican diocese of Sydney in Australia, with its high view of biblical authority as “God’s Word written,” its theological college, and its form of evangelicalism, is increasing in influence worldwide. Graduates of its theological college (Moore Theological College) have received international recognition for scholarship: Graeme Goldsworthy and William Dumbrell (Biblical Theology), Barry Webb and John Woodhouse (Old Testament), Peter O’Brien and Peter Bolt (New Testament), and Mark Thompson and Robert Doyle (Systematic Theology) are just a few examples. Yet in some quarters of the Anglican world, both within Australia and beyond, this diocese is the target of strident polemic. The descriptors are legion: “fundamentalist,” “misogynist,” “patriarchal,” “separatist,” even “Anglo-baptist.”

How well based are these criticisms? Not at all, argues Michael Jensen. The son of the present archbishop of the diocese (Peter Jensen), the nephew of the influential dean of the cathedral (Philip Jensen), and a faculty member of Moore where he was formed as an Anglican minister, Jensen writes as a true insider. His book is rightly subtitled “An Apology” (that is, a defense).

In defending the diocese Jensen highlights two of its distinctive theological contributions. Part One expounds its doctrine of the Bible and the discipline of biblical theology developed to intelligently and faithfully read it. He helpfully points out that Biblical Theology as taught at Moore isn’t to be confused with the Biblical Theology movement that had a relatively brief run in American liberal theological circles until it waned in the 1960s. Jensen correctly sees Moore’s molecular rather than atomistic (prooftexting) way of reading the Bible—pioneered first by D. W. B. Robinson and subsequently by Goldsworthy—as “(humanly speaking) the secret to the theological robustness of the Moore College education.” He also discusses the Sydney Anglican commitment to expository preaching in a nuanced way that recognizes that what passes for expository preaching today doesn’t exactly match any of the forms of communication seen in the New Testament church but arguably develops legimately from them.

Part Two deals with ecclesiology where the local church is understood as the parish congregation, not the diocese gathered around its bishop as in the catholic tradition (whether Anglican or Roman). Moreover, when the believers assemble, their assembly reflects the gathering around Christ in heaven. The gathering is the local church and not reducible to a part of it. This view of the importance of the congregation separates the ecclesiology of Sydney Anglicans from that held by many other Anglicans. Jensen also rightly accents the contributions of a former archbishop of Sydney (Robinson) and a former principal of Moore Theological College (D. B. Knox). Interestingly, neither one of these creative thinkers was trained at Moore.

How successful is Jensen’s defense? To be successful he needed to address caricatures such as the claim that Sydney Diocese is “fundamentalist” and the misinformation on which the claim is based. Journalist Muriel Porter is his foil here. Jensen responds effectively with facts, figures, and counterexamples to her polemic. He shows Sydney Diocese has a commitment to scholarship and cultural engagement that makes the label “fundamentalist” an ill fit. He acknowledges, though, that the temptation to be fundamentalist in mentality is one the diocese needs to resist. With regard to the idea that revelation is only propositional—a view seminally championed by Knox—Jensen carefully discusses both what’s confusing and also meritorious. In so doing he effectively deals with influential caricatures. Significantly he does recognize, too, that Sydney Anglicans can play the ecclesiastical politics game in intradenominational matters with toughness and combativeness. But he doesn’t highlight how internal critics or questioners can have the same alienating experience.

On a critical note, I believe Jensen’s defense would have been even stronger by making extended reference to the diocesan department of evangelism and the extremely influential leadership and modeling of the late John Chapman (Chappo). The diocese is not only committed to scholarship and cultural engagement but also to evangelism. Sydney Anglicanism is gospel centric and gospel enthusiastic. Without this dimension given due weight, the story of Sydney Anglicanism is, in my view, incomplete. Further, Jensen defends the diocese against the charge of being unAnglican. He demonstrates that doctrinally it falls well within the Anglican tradition and its Reformation legacy. However, Anglicanism, like Lutheranism, is a re-formed Western Catholicism—hence it is a liturgical church (Prayer Book). It’s on the issue of the dioceses’ liturgical practices or lack thereof that criticism needs to be met more robustly than Jensen does. 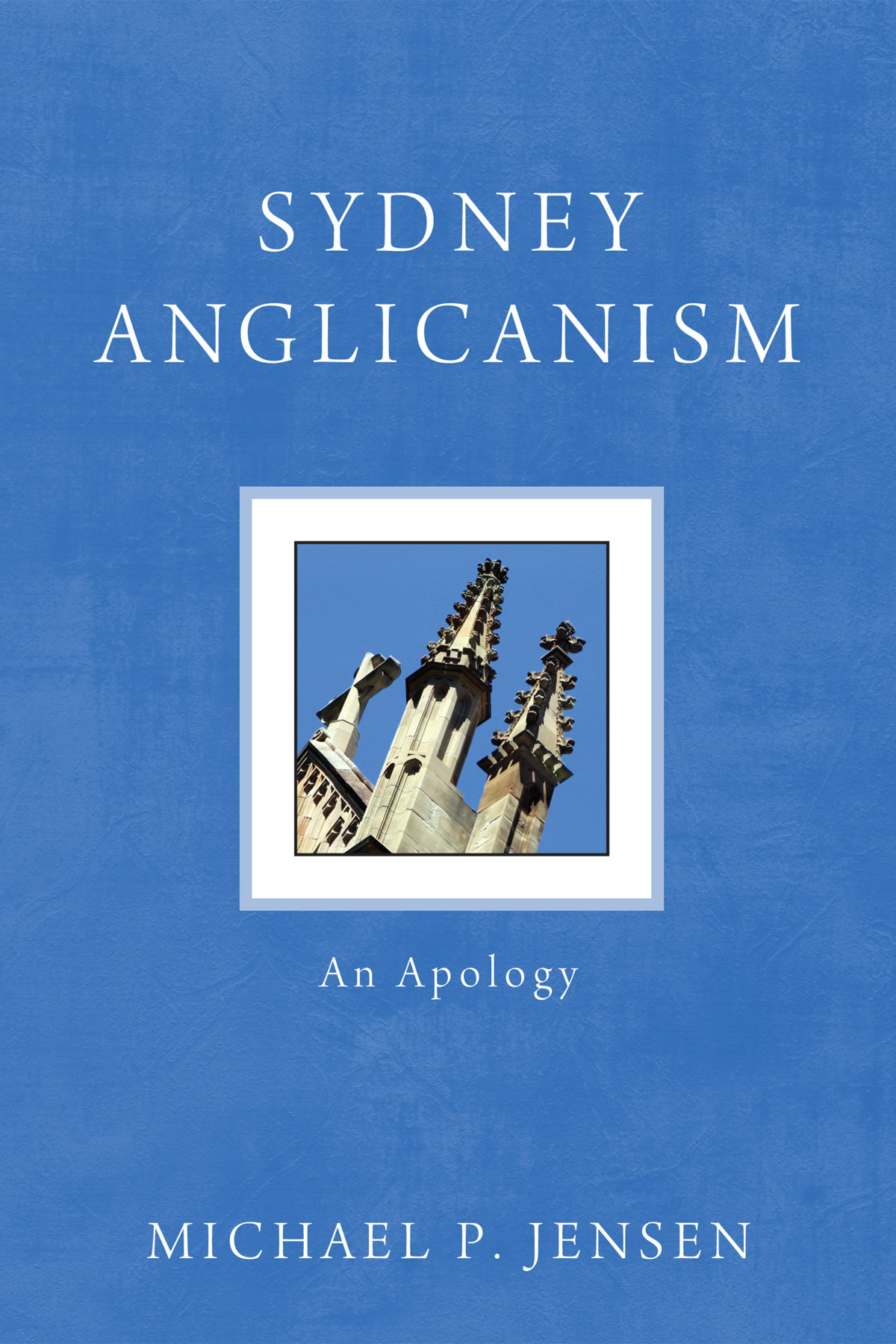 Sydney’s evangelical Anglicans have been the focus of a great deal of controversy and criticism in the Anglican world. Their blend of conservatism towards doctrine and radicalism towards the institutional church has made them something of an enigma to other Anglicans. But what makes them really tick? Michael Jensen provides a unique insider’s view into the convictional world of Sydney Anglicanism. He responds to a number of the common misunderstandings about Sydney Anglicanism and challenges Sydney Anglicans to see themselves as making a positive contribution to the wider church and to the city they inhabit.

I do have some other concerns. The charge that Sydney Diocese embraces a form of Arianism in its view of the Trinity is generally successfully blunted. However, Jensen doesn’t deal with the problematic language of the Diocese of Sydney Doctrine Commission Report on the Trinity and gender relations, upon which that accusation in part is based. The report can be read to assert that the Father and the Son are ontologically different (“differences of being”). That wasn’t the intent—I have discussed this with the framer of the report—but it’s certainly been read that way, raising the specter of the ontological inferiority of the Son in the Godhead. How we use words really does matter on such matters of importance.

Overall, Jensen’s defense is well written, ably argued, and balanced in tone. He thinks for himself, as astute critical observations of his own diocese show (especially of its defensiveness when under challenge). The book’s discussions of biblical theology, expository preaching, the doctrine of the church, gender relations, and how to practice godly politics (among others) make it a worthwhile read for an American audience who otherwise may have no interest. New Testament scholar and liberal Anglican bishop J. A. T. Robinson distinguished between “the fearfulness of the fundamentalist,” which he disapproved, and “the caution of the conservative,” which he respected. Michael Jensen admirably exhibits the latter in a constructive way.