When asked about his religious background during the 2016 campaign, Donald Trump frequently mentioned Norman Vincent Peale. Peale, who died in 1993, was the most famous clergyman in America during the 1940s and early 1950s. When Trump was a child, his family regularly attended Peale’s Marble Collegiate Church, and the minister presided over Trump’s first wedding ceremony.

Trump credited Peale’s bestselling book The Power of Positive Thinking with helping him maintain an optimistic attitude during his difficult bankruptcy in the early 1990s. With Peale as his inspiration, Trump said he “refused to give in to the negative circumstances and never lost faith in myself.” Now that one of Peale’s disciples sits in the Oval Office, there couldn’t be a better time for the publication of Christopher Lane’s Surge of Piety: Norman Vincent Peale and the Remaking of American Religious Life. 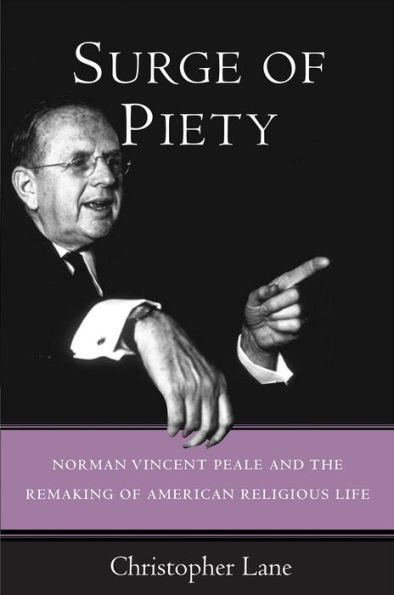 Surge of Piety: Norman Vincent Peale and the Remaking of American Religious Life

Surge of Piety: Norman Vincent Peale and the Remaking of American Religious Life

Lane—an English professor at Northwestern University in Evanston, Illinois—has not written a biography. Readers interested in Peale’s life, theology, and pulpit ministry would be better served by picking up Carol George’s God’s Salesman. Instead, Lane focuses on Peale’s interest in melding positive Christianity with psychiatry—what Peale called “religio-psychiatry.” In 1937 Peale, with the help of the Freud-trained and appropriately named psychiatrist Smiley Blanton, founded a clinic in New York City under the banner of the American Foundation of Religion and Psychiatry. They treated tens of thousands of patients over the next three decades while developing their new system of thought.

Religio-psychiatry connected mental and spiritual health. People struggle with anxiety, depression, or other mental disorders because they’re burdened down with negative thought patterns and because they failed to acknowledge God’s essential goodness throughout their lives. By encouraging patients to “give up their bad images of a punishing and vengeful parent and God,” they can “come to regard both parents and God as loving, accepting, and forgiving” (30). God doesn’t want people to wallow in guilt and self-recrimination, but to accept themselves just as he accepts them.

Peale’s thinking was shaped by his own debilitating struggles with shyness. When he started pastoring at Marble Collegiate Church, there were only a few hundred attendees in a massive auditorium designed to seat thousands. Peale was discouraged, so he preached a sermon series on “belief in God,” “belief in yourself,” “belief in the future,” and “the power of positive thinking” (78). His optimism paid off. Church attendance swelled to more than 3,000, he was offered a weekly radio show, and his monthly magazine Guideposts reached more than a million subscribers. But Peale’s apotheosis came in 1952 with the publication of The Power of Positive Thinking. The book topped bestseller charts for 186 weeks and sold more copies that decade than any book other than the Bible (11).

This proved an attractive message to Americans struggling through the anxieties of first the Great Depression and then the Cold War. By the 1950s middle-class Americans were annually consuming 1.2 million pounds (!) of anti-depressants, so it was comforting when Peale told them the key to happiness was to “trust God, have faith, stick it out, [and] be a believer in the good heavenly Father, in your country, and in yourself” (79, 109). A good life, the American life, could be had if one only maintained a positive mental attitude, attended church often, and prayed regularly.

A good life, the American life, could be had if one only maintained a positive mental attitude, attended church often, and prayed regularly.

It worked. By the end of the 1950s, church membership had risen to 69 percent of Americans, with nearly half the country attending a church or synagogue on any given Sunday. Christianity was plastered all over American culture, with Elvis singing Gospel hits on the radio and Charlton Heston parting the Red Sea on a Hollywood soundstage.

Peale’s ideal patient was someone who struggled with mental illness but rapidly improved when he committed to positive thinking. Yet there was a dark side to Peale’s system. If mental health is a product of positive thinking, then mental illness must be a self-inflicted spiritual disease. Patients who continue to struggle with symptoms after receiving treatment can only blame themselves. Peale even accused one of his female patients of suffering from “pseudo epilepsy” because she didn’t respond to treatment (55). And when the supply of ideal patients ran low, Peale wasn’t above fabricating case studies as a substitute for less-than-compliant real patients.

Peale’s system attracted critics as well as adherents. Theologian Reinhold Niebuhr accused Peale of preventing his followers from dealing with “real human suffering” and offering them “not a genuine denial of evil but rather a horror of it” (91). Further, Peale reduced Christianity to a checklist of behaviors that, if followed, would guarantee pragmatic benefits. As he proudly stated, “We have made the mistake of thinking that Christianity is a creed to be recited. On the contrary, it is a power to be tapped” (12). It was a faith in the effects of faith. What mattered most about religious belief was its ability to heal ailments and provide happiness in this world, rather than in the life to come. Thus Smiley Blanton could simultaneously brag to Sigmund Freud of his lack of religiosity while obsessing over the miraculous healing of an Irishman at Lourdes (47).

Peale reduced Christianity to a checklist of behaviors that, if followed, would guarantee pragmatic benefits. . . . It was a faith in the effects of faith.

In a direct sense, Peale’s positive thinking anticipated the prosperity gospel, which proclaims God wants you to prosper spiritually, physically, and financially. All you need is the self-confidence to claim those promises. If you still struggle, if your health fails or the bank forecloses on your house, well, you must be guilty of a lack of faith. Peale always denied that positive thinking guaranteed wealth, but it was a logical extension from his guarantee of mental health. The message resonated with contemporary megachurch ministers like Oral Roberts and Robert Schuller, the latter of whom credited a 1957 guest sermon by Peale with shifting his own preaching style away from a message of “guilt in guilty hearts” toward positivity and hope.

Evangelical readers may be tempted to dismiss Peale as yet another liberal Christian who watered down the gospel for the sake of influence. Yet there is another aspect of Peale’s message that ought to hit closer to home. He believed Christianity not only improved the individual believer’s mental health, but also protected the nation as a whole from godless Communism. Religious revival would have an “inoculating” effect against Communist subversion (68).

In this, Peale was a man of his times. President Dwight D. Eisenhower, who rarely attended church prior to taking office, proclaimed that “recognition of the Supreme Being [was] the first—the most basic—expression of Americanism” (96). With Peale’s encouragement, Eisenhower signed legislation putting “In God We Trust” on our currency and adding “under God” to the Pledge of Allegiance. He famously said, “Our form of government has no sense unless it is founded in a deeply felt religious faith, and I don’t care what it is.” This was a faith in the civic effects of faith.

That message didn’t only appeal to liberal churchgoers and pragmatic presidents. No less a figure than Billy Graham echoed some of the same themes in his crusades during the late 1940s and 1950s. Graham frequently warned his audiences that America’s only hope for withstanding Communist domination was revival. “Soviet Russia may well be the instrument in the hands of God to bring America to her knees in judgment,” Graham warned, “unless America repents of her sins of immorality, drunkenness, and rebellion against God.” Given Peale and Graham’s shared belief in the power of Christianity to defeat Communism, it’s no surprise Peale sponsored Graham’s New York City Crusade in 1957 or that both men vehemently defended Richard Nixon against accusations of using religion for political gain (to their mutual chagrin after Watergate).

Despite Peale’s popularity in the 1950s, by the 1960s his religio-psychiatry foundation was in debt and Peale stepped down from active management. That decline came in step with national trends in religious adherence. For example, the percent of Americans who believed that “religion can answer today’s problems” plummeted from 81 percent in 1957 to 62 percent by 1974 (129). Positivity was crumbling under the weight of political corruption, interminable war, and social upheaval. The Christian nationalism of the early Cold War had been exposed as wide but shallow.

Peale’s ministry offers modern evangelicals a cautionary tale given our embrace of a deeply flawed president on the grounds of political expediency. If we define our Christianity pragmatically as the key to unlocking national success and security, we may end up with a prosperous yet empty shell of a religion—a faith in faith’s effects.

Paul Matzko is a postdoctoral fellow at the Baylor University Institute for Studies of Religion. For more information on his research into radio broadcasting, government censorship, and the origins of modern conservatism, see his website. You can also follow him on Twitter.