I was a little surprised at the popularity of this book. I knew it had sold well, but I had no idea how much it motivated readers. I walked into the gym with this book in my hand and a 20-year-old man grabbed me by the arm and asked, “Is that Sun Stand Still?” After I told him it was, he proceeded to tell me how he had just committed his life to Christ six months before and that Sun Stand Still had changed his life. He was excited about the book, and it was evident in how loudly he spoke, seemingly unhindered by the attention his loud voice was getting from the crowded gym. He was ready and motivated to change the world.

Steve Furtick, author of Sun Stand Still: What Happens When You Dare to Ask God for the Impossible and pastor of Elevation Church in Charlotte, North Carolina, wants his readers to dream big, believe God can do big things, and then act on faith-informed, God-size dreams. He wants to motivate you to not settle for the mundane, but to pursue the impossible. Furtick seems to be an expert in the impossible. He’s young (30 years old), not too far removed from his graduation date at The Southern Baptist Theological Seminary, and has planted a church that has grown to more than 8,000 members.

The book is based on two stories. The first is the one the title is based on: the story of Joshua and the battle with Amorites. In the climax of the story, daylight is fading, and the Amorites are about to slip away from the grasp of Joshua and Israelites. Joshua needed more daylight to finish the job, so he asked God for more light-for the sun to stand still. It was an audacious prayer based on God’s promise to win the battle. Joshua needed a big miracle, so with faith informed by God’s promises, he asked for the impossible.

In his second story, Furtick tells about the church he planted. The story begins at a U2 concert in 2006. With the arena packed, Furtick turned to his friend and said, “One day our church will fill this arena for a worship service.” He believed God for the impossible, and in 2010, he was pulling up to the Time Warner Cable Arena in Charlotte with a line a people wrapped around the building to get in. But they weren’t there to see Bono. They were there to worship at the Elevation Church and listen to Furtick preach.

The rest of the book features story after story, lesson after lesson where men and women have grabbed a big vision of what God can do and accomplished big things for God. Some stories are inspiring; others are just staggering. Like Joshua, Furtick encourages us to trust in the promises of God that he will do great things through great faith.

There’s a lot to like in Sun Stand Still. Furtick wants to see lots of people get saved. He takes the Word of God seriously. He believes in a real hell and that believing the gospel saves people from it. He wants to change his city, and he wants you to change yours. 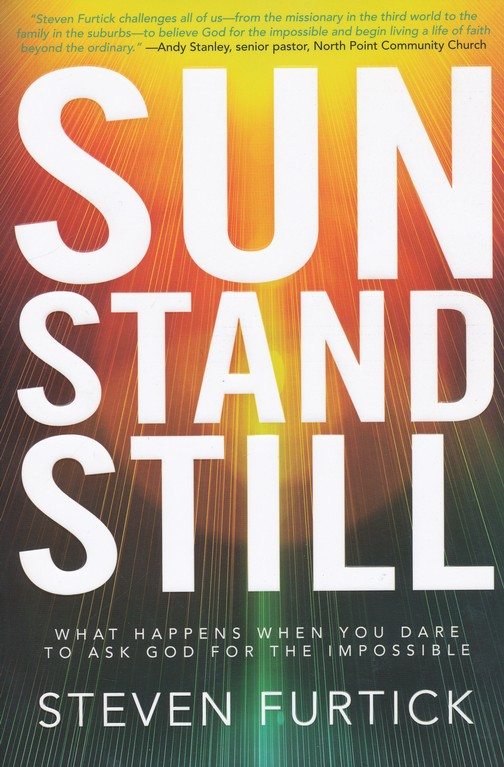 Sun Stand Still: What Happens When You Dare to Ask God for the Impossible

Sun Stand Still: What Happens When You Dare to Ask God for the Impossible

If you’re not daring to believe God for the impossible, you may be sleeping through some of the best parts of your Christian Life.

There’s also a good lesson here for gospel-centered, young Reformed types-like me. We need to remember that our faith is not just in a message, but in the power of a great God who has accomplished the work of the gospel through his Son, Jesus Christ. That is what’s behind, under, and in the message of the gospel. Furtick is right to point to God’s great power and let that inform our prayers and expectations.

But I need to be critical in a few spots. Furtick identifies Joshua’s prayer based on the promises of God and applies it to our day-we should make bold, Joshua-like, sun-stand-still prayers based on God’s promises. But God’s promises to Joshua were explicitly about defeating the enemies of Israel and taking the promised land. The promise was not: Believe God can do great things and, then, pray big. The promises of God were related to God’s redemptive promises that were finally and gloriously fulfilled in Jesus Christ.

Furtick’s book is also complicated by the reality that many of our great prayers, however big and faith-filled, don’t get the answer we want from God. There are many disappointments in life when we seem to be going out on a limb, hoping that God will come through. Furtick attempts to make room for disappointments in his chapter “When the Sun Goes Down.” But what makes the matter confusing is that Furtick keeps using the language of promise. God promises to do great things through our radical faith, but if he doesn’t . . . well, maybe next time. That’s problematic. Is the Christian life just one gigantic prayer request to the next, hoping that the next one might be the one where God turns the world upside down?

Even more, Furtick doesn’t relate God’s great work in the world through the local church. Rather it’s essentially individualistic. What can you do? What is your divine potential?

I wonder how many readers relate this book to real life. What about pastors in rural churches, where their congregations don’t have the capacity to grow larger than 100 people, and they’re $200 under budget every month because they’ve committed to giving $200 a month to a missionary family in Jordan? What about single mothers, who are trying to get up early enough to pray, work, and teach their kids about Jesus every day? Or what about the new Christian who is trying to overcome a 10-year porn habit? Furtick wants to make room for the nitty-gritty parts of life, but his examples of great faith are dramatic stories of pastors who fill arenas and surgeons who give up three months out of the year to do charity work overseas. I am left wondering about the millions of Christians who never accomplish the impossible. Do they lack faith? Do they not believe in the power of God enough? Are they too comfortable with the mundane? Furtick wants you to be unimpressed with the mundane and convinced that God has scripted something miraculous.

But there is a radical faith that expresses itself in faithfulness: The father who faithfully reads the Bible and prays with their children; the mother who labors to have joy while changing diapers and cleaning up vomit; the missionary who perseveres in a small tribe with little fruit over 20 years; the elder who never misses a funeral, wedding, or hospital visit; the seminary student who decides to teach the elderly ladies Sunday school class or spend Saturday nights preaching at rest homes; the pastor who says no to more money and a bigger church and stays at the smaller church where he’s labored with the same people, in an old building, with a cranky deacon board.

Great faith may mean that 25,000 people will listen to you speak. But it might also mean that you stay married for 67 years, your kids believe the gospel, and you can give $150 more a month to missions because your mortgage is paid in full.