In 1992 John MacArthur wrote Charismatic Chaos, and now he has issued a new book on the movement that is equally critical. Anything the pastor of Grace Community Church in Sun Valley, California, writes garners attention, since his preaching and writing ministry has affected and blessed so many over the years. The thesis of the book is evident from the title: Strange Fire: The Danger of Offending the Holy Spirit with Counterfeit Worship. MacArthur argues that the charismatic movement misrepresents and blasphemes the Holy Spirit, offering false worship instead of worship pleasing to God. He is concerned that so many today endorse or are passive about the charismatic movement, even though its influence is deleterious.

In using the word charismatic MacArthur refers to all three phases of the “charismatic” movement, so his indictment includes the Pentecostal movement inaugurated in the early part of the 20th century, the second wave of the 1960s and 1970s, and the third wave that began in the 1980s and continues to this day. He acknowledges there are exceptions to his indictment but maintains the movement as a whole is seriously flawed.

MacArthur calls upon readers to “test the spirits” (1 John 4:1), documenting the many abuses propagated by false teachers in the charismatic movement and focusing on the ministries of those like Benny Hinn, Kenneth Copeland, Joel Osteen, and so forth. He rightly indicts those who teach a prosperity gospel, where health and wealth are promised at the expense of the clear teaching of the Scriptures. MacArthur also recounts many examples of sin and immorality within the charismatic movement. For instance, he questions how Paul Cain could be a prophet since he struggled significantly with alcoholism and homosexuality.

No Need for Gifts

MacArthur maintains that the New Testament teaches the supernatural gifts have ceased. Signs, wonders, and miracles were given for the purpose of accrediting the ministry, death, and resurrection of Jesus Christ. The church is built on the foundation of apostles and prophets (Eph. 2:20), and because that foundation has been established, there is no need for such gifts today. He argues that since most agree apostles are no longer among us, there are good reasons to think other gifts have been withdrawn as well. For instance, the gift of prophecy no longer exists, according to MacArthur, since prophecy in Scripture is infallible. He argues vigorously against the notion that New Testament prophecy differs in nature from Old Testament prophecy. Prophets are tested by their prophecies, and if prophecies are mixed with error then the person is a false prophet. Similarly, the gift of tongues is limited to speaking in foreign languages. The earliest Pentecostals maintained they spoke in foreign languages; only after it became evident such claims were false did they resort to the notion that they spoke with ecstatic utterances. 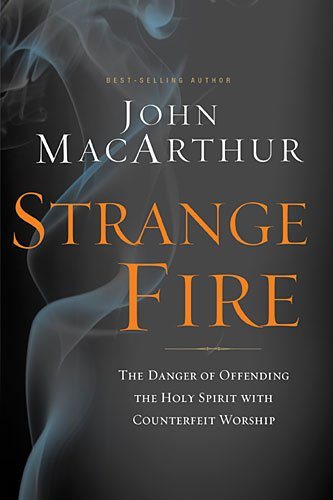 Strange Fire: The Danger of Offending the Holy Spirit with Counterfeit Worship

Strange Fire: The Danger of Offending the Holy Spirit with Counterfeit Worship

Further, MacArthur sets out what the Scriptures teach regarding the Spirit’s work in salvation and sanctification, contrasting it with the teaching and practices of charismatics. He concludes the book with a letter to continuationist friends, warning them of the consequences of accepting and endorsing the charismatic movement.

The issues raised in Strange Fire are intensely controversial, so I should lay my cards on the table. I have traveled a road in which I was a cessationist in my early years as believer. I then became a non-cessationist and taught accordingly for a number of years. Finally, in the mid 1990s I slowly returned to a cessationist position. I am sympathetic, then, to the case MacArthur makes for cessationism. The dangers and extremes he identifies in the charismatic movement are timely and should be heeded seriously.

Despite my fundamental exegetical and theological agreement with MacArthur, however, Strange Fire suffers from a focus on the extreme adherents of the charismatic movement. (I did wonder, incidentally, whether Joel Osteen should be labeled a charismatic, for one can be a prosperity preacher without being charismatic.) MacArthur says early in the book he doesn’t distinguish between the three waves of the charismatic movement, but this failure to make distinctions is problematic. He claims the extremes and abuses characterize the movement. But who really knows what the numbers are? Certainly, there are extremes in the movement, and obviously many who have gone astray. But many charismatics reject the likes of Benny Hinn and Kenneth Copeland.

Despite qualifications here and there, one could get the impression MacArthur thinks almost all charismatics dishonor the Holy Spirit and are opposed to God. Certainly that is true of false teachers like Benny Hinn, but there are also many charismatics who repudiate the teaching and practices of people like Hinn, and hence the rhetoric of the book should be modified. MacArthur seems to acknowledge as much in his open letter to continuationists who have sound theology, though he believes they are a very small minority. Nevertheless, the clarion call of warning should be modified with clearer and more forthright admissions that many charismatics adhere to the gospel and are faithful to God’s Word.

Not Open and Shut

Further, it should be acknowledged that the arguments for a cessationist reading aren’t open and shut. Nowhere does the New Testament clearly teach that supernatural gifts have ceased. A good argument can be made for such a reading; indeed, I think the case for cessationism is convincing, and the warnings MacArthur raises are salutary. Still, we must admit there are some solid arguments on the other side as well. For example, a good case for the continuation of the gifts until Jesus’ second coming can be made from 1 Corinthians 13:8-12.

Similar arguments could be made about tongues and prophesy. I think MacArthur is correct in saying that prophecy is infallible and doesn’t exist today, and that tongues are in foreign languages. On the other hand, good arguments for the continuation of prophecy and for tongues being in a code indiscernible to us are made by scholars like Wayne Grudem, Don Carson, and Gordon Fee. I think MacArthur rightly claims these arguments aren’t finally convincing. Moreover, I agree with him when he says that even the best of charismatic thinking introduces distorting elements into the church. In other words, impressions shouldn’t be confused with prophecy, and free vocalization isn’t the same thing as the biblical gift of tongues. On the other hand, those who disagree with us on this matter are trying to understand Scripture as well, and many “prophecies” in charismatic churches simply restate scriptural truth and much tongue-speaking going on isn’t demonic but a form of psychological relaxation (I know many on both sides disagree with me here!). Incidentally, though I am attracted to Vern Poythress’s argument that spiritual gifts today are analogous to but not identical with the gifts in the New Testament, the argument fails to convince, since there is no warrant in Scripture for a separate category. Poythress posits a realm outside the scriptural witness.

We can be thankful for MacArthur’s longtime passion for the truth of the gospel and for his unswerving commitment to the Word of God. He rightly reminds us that we must be bold and courageous in renouncing false teaching. At the same time, the charismatic movement is painted with too broad of a brush in Strange Fire. We can be thankful for the many good things that have occurred and are occurring in the charismatic movement as well.