We currently find ourselves living in a cultural house built on a foundation of sand. This situation casts many challenges, not the least of which is finding solid footing for Christian witness and cultural engagement. Central to our current cultural situation is the ongoing sexual revolution represented by same-sex marriage and transgenderism. For Christians seeking to stand on solid ground and to respond to these challenges, R. Albert Mohler’s new book, We Cannot Be Silent: Speaking Truth to a Culture Redefining Sex, Marriage, and the Very Meaning of Right and Wrong, is an essential resource.

We Cannot Be Silent portrays all the strengths of Mohler’s ministry. It is intellectually accessible, theologically sound, culturally informed, and strategically compelling.

The book’s title reflects his central thesis, as well as part of his explanation for how America got itself into its current cultural crisis. Chronicling how marriage was critically undermined over several generations through birth control, no-fault divorce, and cohabitation, Mohler—president of The Southern Baptist Theological Seminary in Louisville, Kentucky—notes that the silence of Bible-believing churches helped facilitate the fall of marriage. Now, with our backs against the wall, he sounds an urgent plea: the one approach Christians cannot afford to adopt is silence. We must speak.

Before we can speak, though, we must understand. Christians must understand the Bible’s teaching on marriage, sexuality, and human identity. We must understand the forces working in and beneath our culture. We must have a unified consensus of biblical conviction. Only then can we speak courageously, graciously, and persuasively. And even then we may still be pushed to outer extremes of public life.

Mohler’s analysis is hugely informative. He chronicles the cultural and intellectual forces behind the today’s massive moral shift. He outlines the gay-rights strategy of subversion and disinformation that has captured our legal courtrooms and cultural living rooms. His explanation of what’s at stake in the transgender revolution is of special relevance. Whereas homosexuality threatens human society, transgenderism threatens human identity. The book concludes with four chapters that ably summarize topics that will be key to the Christian witness in years to come: the Bible’s teaching on sex; the grounds of religious liberty; the commitment and skills to extend Christ’s compassion to the broken; and lucid answers to hard questions being asked today. 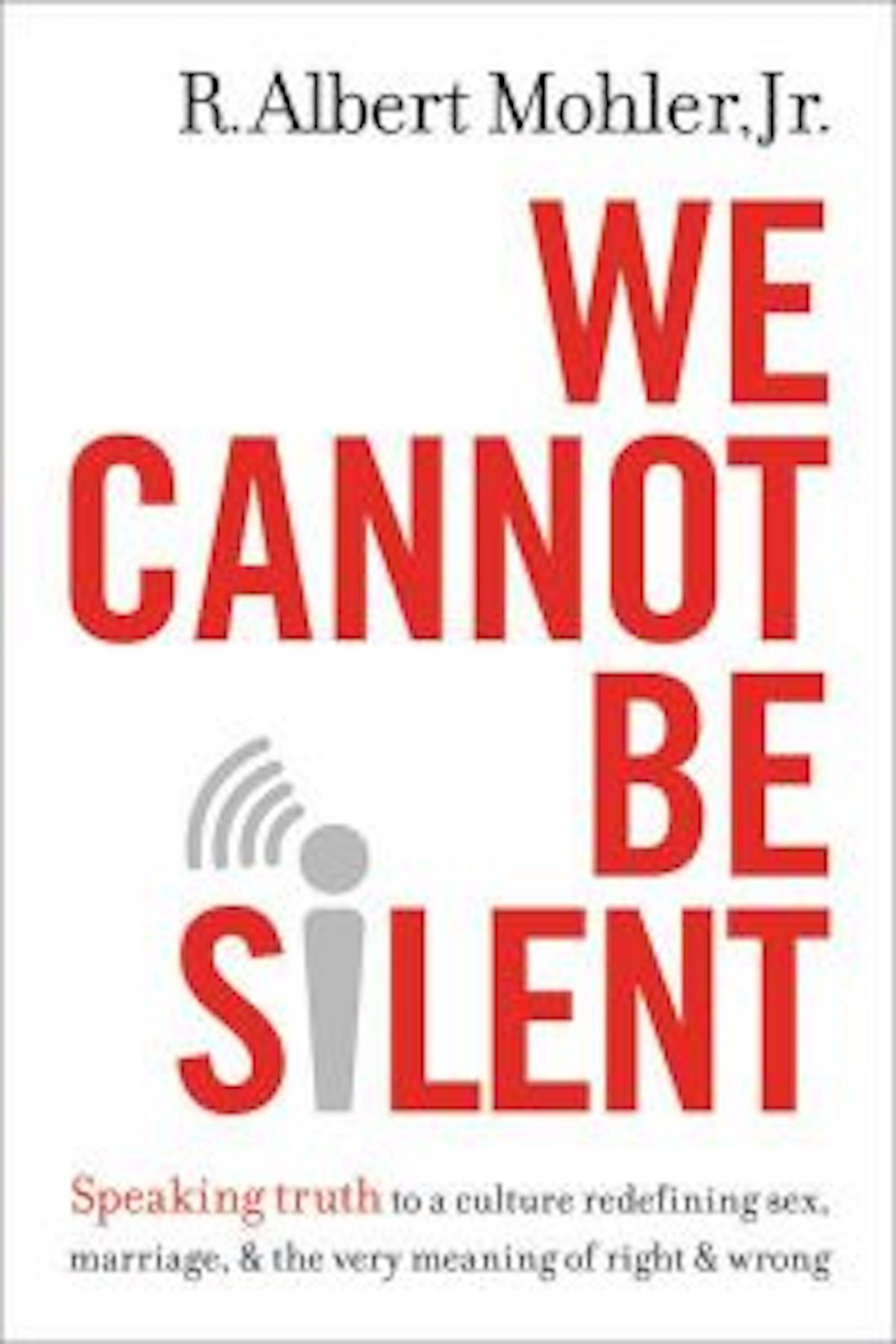 We Cannot Be Silent: Speaking Truth to a Culture Redefining Sex, Marriage, and the Very Meaning of Right and Wrong

We Cannot Be Silent: Speaking Truth to a Culture Redefining Sex, Marriage, and the Very Meaning of Right and Wrong

We Cannot Be Silent includes a number of provocative points that dig beneath the surface. Mohler argues, for instance, that late 20th-century evangelicals badly erred by adapting to the culture’s birth-control strategies, thus decoupling marriage from reproduction. He strikes a balanced view, differing from Roman Catholicism by stating that marriage is not encompassed by reproduction, noting that not every sexual act must be directed toward producing children. Nonetheless, he argues, every Christian marriage must be positively open to producing and raising children, whether or not this actually happens. Church leaders should take Mohler’s argument seriously, for a recommitment to procreation will be vital to an explicitly Christian defense of marriage.

Further, Mohler argues that evangelicals have been hampered by a reluctance to employ natural law in our defense of marriage and sexuality. He’s well aware of the limitations of natural law, but ably points out that, in a public debate where Scripture is excluded, natural law offers potent responses to secular chaos. In short, evangelicals will need to be far more informed of natural law arguments if we’re to persuasively engage a secular culture that’s deaf to God’s Word.

While commending the great value of Mohler’s analysis, I’d suggest his argument could be enhanced even further by considering the insights offered by Peter Jones regarding how Western culture has advanced beyond secularism into paganism. Mohler alludes to this shift by observing how the transgender revolution has ridden on the storm of postmodern relativism. But in his essential resource, One or Two: Seeing a World of Difference, Jones argues that our culture has begun embracing actual paganism in two key respects: (1) by adopting a pantheistic spirituality in which “all is one” cosmically and (2) by rejecting binary creation structures (i.e., God’s created categories of male/female, life/death, parent/child, etc.) so that “all is one” morally.

Thus, while Mohler ably accounts for the sexual revolution through moral and cultural forces, Jones would argue that the spiritual dynamics of pantheistic paganism play a deeper role. Yes, secularism has destroyed the Christian moral consensus on sexuality and marriage, but only neo-paganism can account for the otherwise irrational forefronting of homosexuality. Why would this patently destructive lifestyle receive such fervent cultural militarism? Jones answers that homosexuality is the sacrament of pantheistic, neo-pagan spiritual oneism.

In combating pantheistic neo-paganism, Christians mustn’t neglect the vital resource of biblical creation. To be clear, Mohler is far from neglecting the importance of creation in this debate. When we grasp the role of pantheistic thinking today, we realize the secularist assault on God’s moral authority has morphed into a pagan onslaught against God’s existence as Creator. Mohler is exactly right in urging Christians to vigorously defend Christian morality while extending the grace of Christian salvation to a broken and confused world. Yet, as Mohler himself often urges, a gospel-centered evangelicalism must also awaken to the decisive need for a fully biblical worldview. Yes, we must defend Christian morality with the New Testament’s witness of grace and truth in Christ. But the place we must take our stand before an increasingly barbarian culture is on Scripture’s very first verse: “In the beginning, God created the heavens and the earth.”

As the title of his book indicates, Mohler sounds an urgent plea for Christians not to adopt a stance of accommodation to the barbarian advances of today’s moral revolution. The silence of evangelicals in the past as marriage was being undermined precipitated this crisis. Continued silence, now in the face of mounting and perhaps harsh assaults on our religious liberty—or worse still, accommodation to the transgender destruction of human identity—will be disastrous.

Are you tempted to sit out this desperate hour of the culture war, perhaps retreating into the monastery of private gospel piety? Mohler’s insightful analysis will challenge you with this vital mandate that will determine history’s verdict on our Christian generation. We truly cannot be silent.

Richard Phillips (MDiv, Westminster Theological Seminary; DDiv, Greenville Presbyterian Theological Seminary; MBA, University of Pennsylvania) is senior minister of Second Presbyterian Church in Greenville, South Carolina, and a Council member of The Gospel Coalition. He is a regular writer for Reformation21 and the author of numerous books, including Revelation. He and his wife, Sharon, have five children.