A few years ago, I came face to face with my own mortality in a way that required me to prepare to die. I remember being struck with a deep curiosity about what would come of me as my affliction and faith collided. I honestly didn’t know. This curiosity made me want to write about my experience. It also made me want to take Sheldon Vanauken’s A Severe Mercy: A Story of Faith, Tragedy, and Triumph down from the shelf and read it again.

When someone writes with confidence about things they haven’t experienced, my attention span runs short. Swagger doesn’t equal wisdom. But when someone writes questioningly about something they’ve known firsthand, I lean in. Experience generates questions that cut through our assumptions about how a thing is supposed to work and make us survey the land where the thing is actually happening. That’s where our presumptions are tempered by truth, and our untested certainties yield to the mysterious reality that God’s ways are not our ways, and his thoughts are higher than our thoughts (Isa. 55:8–9).

Vanauken’s A Severe Mercy is a book about the collision of affliction and faith, which is another way of saying it’s a book about the difference between how we imagine a thing might happen and how it actually goes—and what role God plays in the difference. It’s part love story, part adventure tale, part tragedy, and part theological treatise on suffering.

I was introduced to A Severe Mercy in college when one of my psychology professors assigned it for our unit on death and dying. When I first read it, I didn’t know what questions I should bring to a story like this—I hadn’t seen a lot of sorrow yet. But I remember the way Vanauken’s story whispered on every page, “There is more going on here than you can see. Pay attention.” 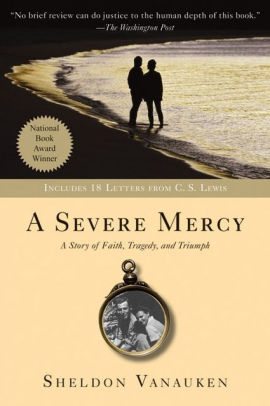 A Severe Mercy: A Story of Faith, Tragedy, and Triumph

A Severe Mercy: A Story of Faith, Tragedy, and Triumph

When Sheldon Vanauken (Van) met Jean Davis (Davy), it didn’t take long for them to fall in love. But theirs was no ordinary love. They would not let it be. Their love would be one the gods would look upon and wonder at the beauty of it. They regarded themselves as pagans, but “it was high paganism. We worshiped the spirits of the earth and sky; we adored the mysteries of beauty and love” (31).

Van and Davy believed human love was the highest glory anyone could obtain, so they set out to make theirs as intimate as possible. They would share everything—the books they read, the places they went, the opinions they held:

That way we shall create a thousand strands, great and small, that will link us together. Then we shall be so close that it would be impossible—unthinkable—for either of us to suppose that we could ever recreate such closeness with anyone else. (35)

They called this their “Shining Barrier”—a shield to protect their love from all intruders.

After getting married, they moved to Oxford, where they became more open to the Christianity they once presumed belonged to the simple-minded. This change came as they developed friendships with thoughtful Christian people, including C. S. Lewis. (Throughout this book, Vanauken includes many letters he and Lewis exchanged.)

Soon, it was no longer Van and Davy’s friends drawing them deeper into Christianity, but Christ himself. They came to faith and soon discovered Christianity was not compatible with the exclusivity they had promised to each other as young agnostics. They would each have to have a relationship with Jesus that was their own, and this would affect every facet of their lives. As Vanauken put it, “It is not possible to be ‘incidentally a Christian.’ The fact of Christianity must be overwhelmingly first or nothing” (86).

Christ had breached their Shining Barrier.

Davy’s faith came easier than Van’s, and he began to resent her conversion. “I did not, I thought, resent her being a Christian; I resented her acting like one. Going to church without me—practically unfaithfulness” (97). Though he couldn’t articulate it at the time, he had become jealous of Jesus. At first, it was just Van and Davy. After coming to faith, it became them and God. But as Davy’s faith matured, it seemed it was God and her, with Van on the outside looking in. Van wanted to share Davy’s faith, but he felt a certain measure of competition with its object.

While Van wrestled with questions about his own faith and his feelings about Davy’s, Davy contracted a virus that destroyed her liver. The virus led to a protracted illness followed, after some time, by her death. For the rest of the book Van wrestles through what to make of the God who took Davy from him. Much of this wrestling is recorded in the letters between Vanauken and Lewis.

Lewis wrote that he believed Vanauken’s struggles had their root in the fact that he had made an idol of love, and it was killing his faith. Lewis said something in this scenario would inevitably have to die—the idol or the faith. The worst option, Lewis said, was for their faith to die while Van and Davy kept on living. “You have been treated with a severe mercy,” Lewis wrote.

You have been brought to see that you were jealous of God. So from US you have been led back to US AND GOD; it remains to go on to GOD AND US. She was further on than you, and she can help you more where she now is than she could have done on earth. You must go on. . . . Do you imagine she herself can now have any greater care about you than that this spiritual maternity of yours should be patiently suffered and joyfully delivered? (210)

If anything about this story sounds overly simplistic, blame me and my limited word count. There’s nothing simple about the severe mercy this book unfolds. Vanauken, who has walked through the experience, surveys the land and raises his questions. Though the book is deeply theological, doctrinally orthodox, and humbly reverent, it offers no easy answers. No dismissive wave of the hand at affliction and death. Vanauken writes, “That death, so full of suffering for us both, suffering that still overwhelmed my life, was yet a severe mercy. A mercy as severe as death, a severity as merciful as love” (211).

Nobody gets out clean in this life. We all suffer. We all lose people we love. We all wrestle with questions about the meaning of this life and the possibilities of the next. And we do more than raise our questions: We begin to form answers. The nihilist concludes there’s no meaning to our suffering. The fatalist concludes it’s the result of an impersonal, unavoidable providence. The Eastern mystic denies its existence and tries to transcend the material world.

But Christians regard suffering as the result of a deep brokenness Christ has come to restore (Rev. 21:1–5). We believe he’s working all things together for the good of those who love him (Rom. 8:28). And we believe our chief end is to glorify and enjoy him forever (1 Cor. 10:31; Ps. 73:24–26; John 17:22–24). These beliefs put suffering in the light of its eventual and permanent end. So we look upon our suffering, question it, and experience it as people whose hope is fixed on the finished work of Jesus Christ (Heb. 12:1–2).

A Severe Mercy has been on my shelf for more than half my life. It’s one of those books—I’m sure you have them too—where, when my eye falls on its spine, I feel a reverence for the weighty truths it contains. It helps us remember and understand that the Christian faith doesn’t center on a mercy without severity or a severity devoid of mercy—but on a divine love that marries the two in the cross of Christ. This is our hope, and we dare not look away.

Russ Ramsey is a pastor at Christ Presbyterian Church in Nashville, Tennessee, where he lives with his wife and four children. He grew up in the fields of Indiana and studied at Taylor University and Covenant Theological Seminary (MDiv, ThM). Russ is the author of the Retelling the Story Series (IVP, 2018) and Struck: One Christian’s Reflections on Encountering Death (IVP, 2017).

2 How Not to Help a Sufferer

3 Is Being Gay Genetic?

5 When a Lesbian Atheist at Yale Came to Christ