Imagine a conversation in which well-meaning skeptics try to deconvert you from Christianity by debunking the prosperity gospel. They marshal their evidence, tell some stories that horrify you as much as them, quote the most egregious theological howlers you’ve ever heard, and then conclude that the message of Jesus can’t possibly be true. If you’ve ever had such an experience—and pastors of charismatic churches, like me, do occasionally—you’ll know how frustrating it is. Everything in you wants to reply: I don’t hold to that type of Christianity either. I probably disagree with it more than you do.

Now imagine a second scenario. You’re an atheist, and you have the same problem. Well-meaning Christians tries to convert you to Christianity by debunking the “new atheism.” They go into great detail about how Richard Dawkins is historically ignorant, Sam Harris morally incontinent, and Christopher Hitchens logically incoherent—and then conclude that atheism can’t be true. And you’re sitting there thinking, I don’t hold to that type of atheism either. I probably disagree with it more than you do. 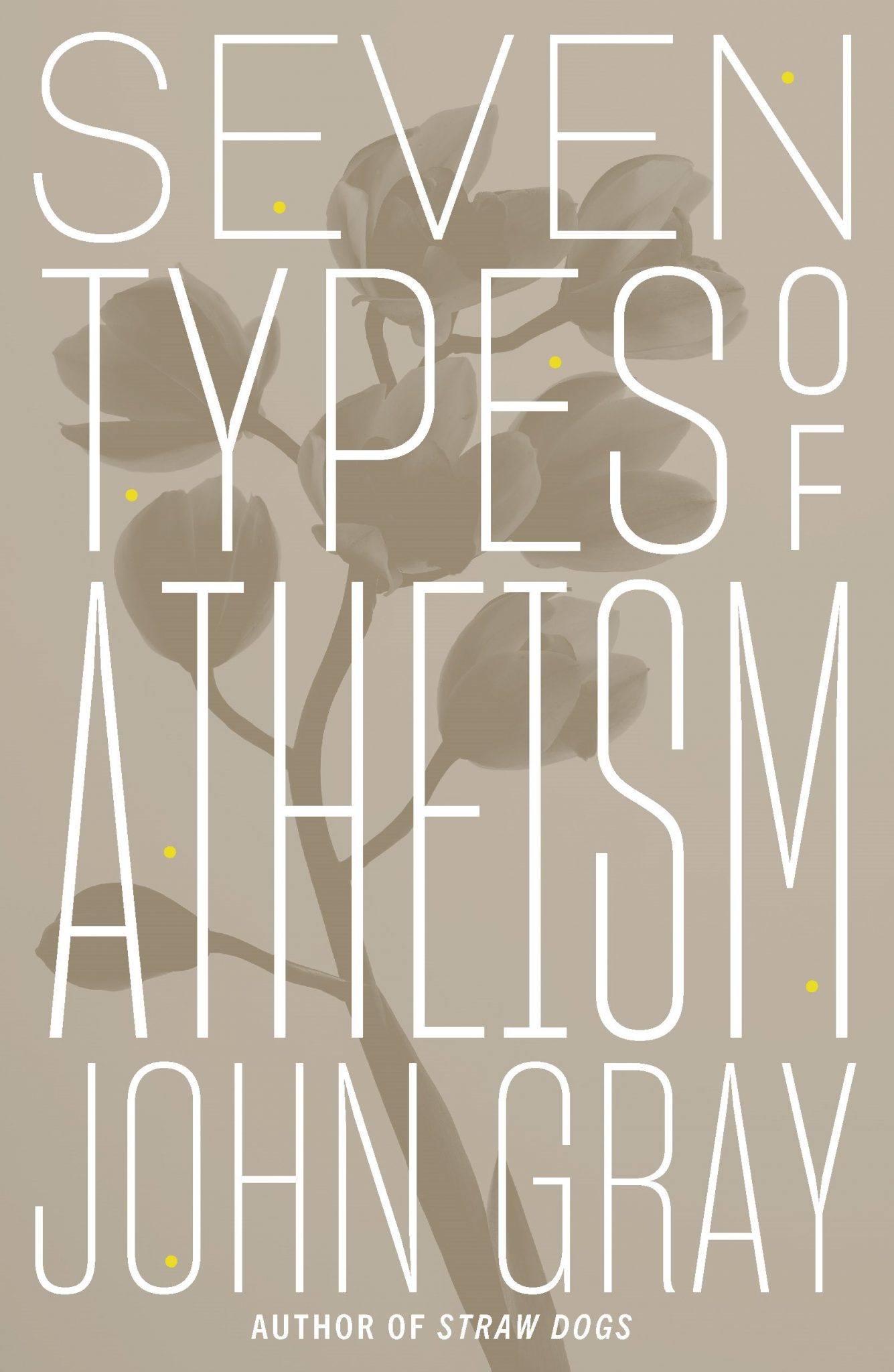 John Gray—veteran British philosopher, intellectual historian, and book reviewer—has no intention of converting anybody. But his Seven Types of Atheism is a searching and helpful taxonomy of unbelief ancient and modern, and it has the potential to make the second of these two scenarios disappear altogether. By carefully disentangling the different ways atheism works, and the different reasons why people find it compelling, he has done a great service not just for atheists who want to be understood but also for Christians who want to understand.

The seven types of atheism, for Gray, are as follows.

A 19th-century orthodoxy—think Henri de Saint-Simon, August Comte, J. G. Frazer, and so on—the new atheism lives on in the work of Dawkins, Hitchens, Harris, Dennett, and company, although it contains “little that is novel or interesting.”

In a manner reminiscent of Christianity’s most ebullient defenders, Gray waves away this recent movement as a “discredited theory,” and concludes that “the organized atheism of the present century is mostly a media phenomenon and best appreciated as a type of entertainment.” Given that this is the variety of atheism that gets the most apologetic attention, this is worth noting.

Following Nietzsche, Gray argues that modern progressivism is a “sacred relic” of Christianity, as people continue to believe in progress and development in history but change the source of this progress from God to humanity. In doing so, however, they saw off the branch they’re sitting on, as can be seen in the works of Marx, Mill, Sidgwick, Russell, Ayn Rand (a surprising inclusion in the book), and in some ways Nietzsche himself. “The belief that humans are gradually improving is the central article of faith of modern humanism,” Gray writes. “When wrenched from monotheistic religion, however, it is not so much false as meaningless.”

This chapter makes uncomfortable reading, because it pulls together a variety of atheist expressions—scientific racism, mesmerism, communism, and transhumanism—which their proponents would claim to be quite different, but which share the same underlying commitment to human advancement through increased scientific knowledge. “Modern racism emerged from the work of Enlightenment philosophes,” including giants like Voltaire, Hume, and Kant (some of the quotations here are appalling); it was integral to the Enlightenment project that some parts of humanity were, and could be, more advanced than others. This continued into the 20th century, albeit in a different form: “Social evolution is an exceptionally bad idea. But bad ideas rarely evolve into better ones. Instead they mutate, and reproduce themselves into new guises.”

“Partisans of revolution, reform and counterrevolution think they have left religion behind when all they have done is renew it in shapes they fail to recognise.” This, for Gray, results from a fusion of Gnosticism and Christianity; humans can be delivered from the darkness through knowledge (Gnosis), but this can happen within this world, through a collective, terrestrial, imminent, and total renewal (Christianity).

As such, there is a surprisingly clear line from John of Leyden and the Kingdom of Munster (1534–5), via the French and Russian Revolutions, to Nazi Germany and even (in perhaps the book’s most audacious move) modern liberalism, which attempts to remake the world in its own image, certain that “only ignorance prevents their gospel from being accepted by all of humankind.”

We’re dealing here with millenarian movements, even if they mostly take place without reference to God.

Every generation has its God haters, but the modern age has seen more than most. In his longest chapter, Gray explores the misotheism of the Marquis de Sade, several of Dostoevsky’s characters, and William Empson (whose Seven Types of Ambiguity stands behind Gray’s choice of title). In each case, he concludes, this kind of atheism doesn’t so much reject God’s existence, but vehemently hates him in a way that that could only exist (at least in this form) as a response to Christianity.

As Gray explains, “Sade was mistaken when he imagined he had left monotheism behind. Instead he changed one unforgivable deity for another.” Empson, likewise, “failed to recognize how much he was himself a neo-Christian.” This sort of rejection, in which the person dislikes God rather than disbelieves in him, is most famously encapsulated in the words of Ivan Karamazov: “It’s not that I don’t accept God, Alyosha. I just most respectfully return him his ticket.”

This is the least cohesive of the seven “types,” at least to me, and (as the chapter title suggests) it’s more defined by what it’s not—breezy, neo-Christian, world-making, progressive liberalism—than by what it is.

The case studies of George Santayana and Joseph Conrad compose the entire chapter, and the best summary is found in this comment on Santayana: “Disillusion proved liberating, since it allowed a view of the world from a perspective that did not expect salvation in history.”

This, from what I have read of Gray elsewhere, is the type of atheism he most sympathizes with—which may also explain the more anecdotal, reflective, and slightly nebulous flavor of the chapter.

It doesn’t seem like Arthur Schopenhauer, Benedict Spinoza, and Lev Shestov have much in common, but for Gray, they share what he calls “the atheism of silence.” Mysticism is a provocative word for this view, but then “a clear line between atheism and negative theology is not easily drawn,” and there is more overlap than would first appear between heretical Christian mystics like Meister Eckhart (1260–1328), who prayed to God to rid him of the idea of God, and atheist mystics like Schopenhauer (who found the transcendent in music) and Spinoza (who found it in nature). Or so Gray argues.

These seven types aren’t uncontroversial. Gray is personally drawn to a combination of types 6 and 7, freely admits to finding the “new atheism” vacuous and uninteresting, and is “repelled” by the others, so there is plenty here for his fellow atheists to disagree with (not least his colleagues at the New Statesman, a British magazine that is a near-perfect instantiation of type 2). His sixth category is vague and could potentially have been clarified through an exploration of its connections (if there are any) to ancient philosophies like Epicureanism and Stoicism.

There are also problems with Gray’s portrayal of early Christian history, including a variety of errors in translation (the word eschaton means “end,” not “day of the Lord”), theology (“in the religion of Jesus, pretty much all of Christian belief is absent”[!]), and history (where he seems to have swallowed Catherine Nixey’s wild, Gibbonesque polemic in The Darkening Age, despite its numerous distortions). So there is plenty here to annoy Christians as well.

At the same time, his nuance and philosophical analysis are bracing and illuminating, and presented in lucid and occasionally fiery prose. By making distinctions many atheists don’t, let alone many Christians, Gray has done us all a service, and all the more so because the more common a variety of atheism is in the contemporary world, the less intellectually satisfying he seems to find it. (This has been borne out in my experience, too; the most intelligent atheists I know are the ones who have the least time for the paperback polemics that came out after 9/11.) The book’s most compelling contribution, though—and it’s a theme that recurs frequently in Gray’s work—is its skewering of the historically naïve and groundlessly confident progressivism that defines much modern godlessness. As he concludes:

Contemporary atheism is a continuation of monotheism by other means. Hence the unending succession of God-surrogates, such as humanity and science, technology and the all-too-human visions of transhumanism. But there is no need for panic or despair. Belief and unbelief are poses the mind adopts in the face of an unimaginable reality. A godless world is as mysterious as one suffused with divinity, and the difference between the two may be less than you think.

4 Did Jesus Have Female Disciples?