Every conversion is a miracle. There is no such thing as a boring testimony. Each story of coming to faith in Christ is an example of God invading the soul like a bolt of lightning, granting faith and repentance to a sinner in need. Moreover, we should praise God for the “boring” conversions. No Christian mom prays over her infant, “Lord, please give him an exciting testimony.”

And yet there is a reason Nabeel Qureshi’s spiritual autobiography, Seeking Allah, Finding Jesus: A Devout Muslim Encounters Christianity [interview], is such compelling reading. The heart sings to see God at work among Muslims. Though many are hostile to the gospel of Jesus Christ, God is faithful to reveal himself to the nations—and this includes our Muslim friends. Nabeel was one of them, and his story is profound.

He was an American-born Muslim. His father emigrated from Pakistan in the 70s and joined the United States Navy. His mother comes from a family of Muslim missionaries. As the subtitle of his book suggests, the Qureshis committed themselves deeply to Islam. Nabeel received a rigorous Islamic education, which included training in the particulars of the Ahmadiyya sect. Some Shia and Sunni Muslims reject Ahmadis as false professors but, like all other Muslims, they declare Allah as God and Muhammad as his messenger.

He Took It Seriously When He Was Taken Seriously

Nabeel’s path to Christianity resembles that taken by numerous others. He met Christians bold enough to share their faith. Betsy interrupted Nabeel in 10th grade to ask him if he knew about Jesus (90). She eventually invited him to church. But despite her best intentions, for most of Nabeel’s young life Christians remained distant and aloof. Looking back, he explains the importance of friendship in evangelism:

In my case, I knew of no Christians who truly cared about me, no one who had been a part of my life through thick and thin. I had plenty of Christian acquaintances, and I’m sure they would have been my friends if I had become a Christian, but that kind of friendship is conditional. There were none that I knew who cared about me unconditionally. Since no Christian cared about me, I did not care about their message. (120–21)

Nabeel didn’t take Christianity seriously until a Christian took Nabeel seriously. That Christian was David. They met at Old Dominion University in Virginia, where both joined the forensics team. The two become inseparable. David let Nabeel into his life. Nabeel reciprocated and, as their relationship grew, their conversations deepened. A devout Muslim, Nabeel didn’t hesitate to talk about God. Neither did David, an evangelical Christian. Over time they discussed the reliability of the New Testament, the historicity of the crucifixion and resurrection, the deity of Jesus, and the mystery of the Trinity. The conversation heated up at times, but never at the cost of their friendship. Again, Nabeel writes:

It didn’t matter how rough our relationship got, because we were living life together. Even if we were at our wits’ end, vowing in moments of anger to never deal with one another ever again, we would be forced to smooth things out when we ran into each other in forensics practice later that week. Or in class the next day. . . . This is only one of the reasons why a strong friendship is critical. A surface-level relationship might snap under the tension of disagreement, but by living our lives together, we were forced to reconcile. Of course, beyond mere proximity, we really did love and care for one another. Like true brothers, even after our biggest knockdown, drag-out arguments, we were still brothers. Love covers a multitude of sins. (190)

There is much in Seeking Allah, Finding Jesus for anyone who wants to grow in his or her ability to share the gospel with Muslims. Nabeel invites us to understand how difficult it is, even in an Americanized Islamic home, for a Muslim to turn from his religion. He educates us about basic Islamic terms we ought to be familiar with. Further, he helpfully walks us through how he came to finally deny the prophethood of Muhammad (208–26) and authority of the Qur’an (228–45). But the most compelling aspect of Nabeel’s journey to the cross was David’s investment. His love made Nabeel think of him as a brother. It isn’t that David loved Nabeel into the kingdom. No, they chewed over deep theology. But Nabeel bit down, even when the theology tasted bitter, because he knew David cared. 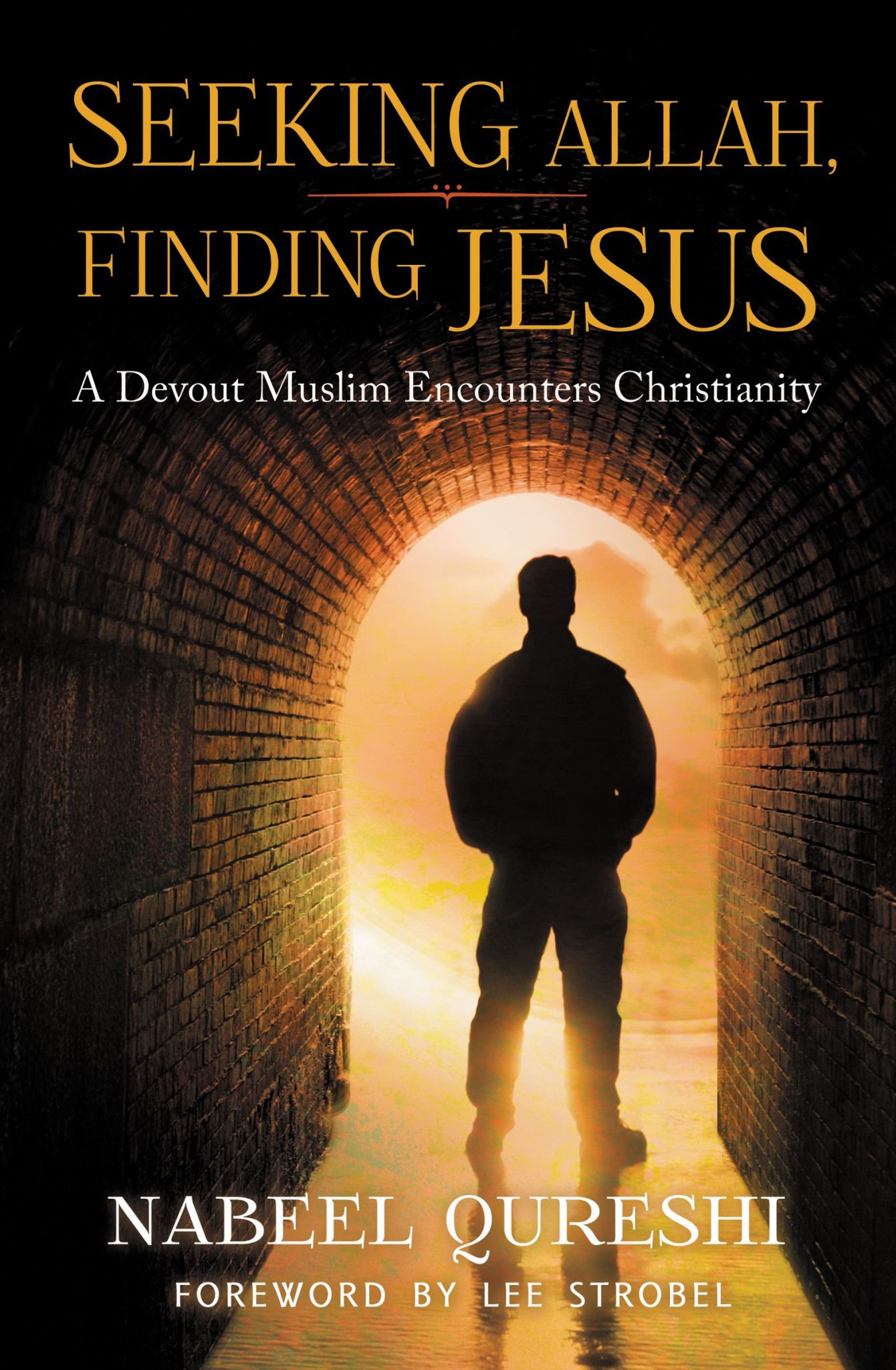 Readers need to be aware that Nabeel credits not only God’s use of David and other Christians in his life, but also God’s gift of miracles. Early in the book, Nabeel says any doubt of theism was erased after he prayed for help finding friends only to see, immediately, “two streaks of color, one gold and one silver” hanging in the sky and pointing him to his desired destination. Nabeel knew that he could never prove to anyone this miracle took place, but he became convinced it was subjective proof of the reality of God (104, 106). Still, Christ was not yet Lord to him.

The apologetics lessons didn’t give Nabeel the certainty he wanted: “If Allah confirmed to me personally that he was actually the God of the Bible,” he writes, “I would accept him, Jesus, as my Lord” (255). In December 2004, while begging God for a dream or vision, Nabeel saw “a field full of hundreds of crosses” (257). Shortly thereafter, he had a vivid dream he discerned could only mean Christianity is superior to Islam (260–66). But Nabeel was still unconvinced and asked himself, Could I really hinge my life and eternal destiny on a dream? Just one dream? (267). In March 2005 he had another. This time he was standing on the outside of an narrow arched doorway looking into a great feast. David was at the feast and asked Nabeel, “I thought we were going to eat together?” (268). A third dream followed about a month later. Nabeel was resting on the bottom of a flight of stairs in a mosque, with an imam sitting behind him. He tried to get off the stairs to sit behind the imam, out of a respect, but Nabeel couldn’t move. A force was pinning him down on the stairs. He then shared the dream with David, who asked, “Does God need to smack you with a two-by-four before you’ll become a Christian?” (273).

Even with a vision and three dreams, Nabeel still wasn’t ready to turn to Christ. The dreams were not enough. Rather these dreams launched him into a “period of mourning” (273) as he contemplated leaving the mosque and, essentially, his own family. He sought refuge in the Qur’an, but it offered no hope or comfort:

It depicted a god of conditional concern, one who would not love me if I did not perform to my utmost in pleasing him, one who seemed to take joy in sending his enemies into the hellfire. It did not speak to the broken nature of man, let alone directly to the broken man in need of God’s love. It was a book of laws, written for the seventh century. (275)

Finally, Nabeel turned to the Bible. When he read “Blessed are those who mourn, for they shall be comforted” (Matt. 5:4) and “Blessed are those who hunger and thirst for righteousness” (Matt. 5:6), he was cut to the heart. “Tears flowed from my eyes once more, but now they were tears of joy,” he recounts. “I knew that what I held in my hands was life itself. This was truly God’s Word, and it was as if I was meeting him for the first time” (276).

Whatever one may think of God’s use of visions and dreams today, they clearly didn’t save Nabeel. The dreams left him unconvinced that Jesus should be his Lord (John 12:37). But in Nabeel’s story these dreams pointed him to the Bible, and there he found words of life. We can certainly pray that God would make himself known through visions and dreams, especially in the Muslim world where gospel light is all too dim. But God does not save through dreams; he saves through his Word. “Faith comes by hearing, and hearing through the word of Christ” (Rom 10:17).

We can be thankful that Nabeel, now a speaker with Ravi Zacharias International Ministries, heard the “word of Christ” through dear friends like David and through his own reading of Scripture. This gospel powerfully changed the heart of a man who once identified himself as “a devout Muslim”—but no longer.

3 How Do Churches End Up with Domineering Bullies for Pastors?

5 Lessons from London for a Divided American Church