Joseph Loconte’s The Searchers: A Quest for Faith in the Valley of Doubt is richly rewarding. It’s a contemplation of Christ for believers and an outreached hand to unbelievers. Without making assumptions about the reader’s beliefs, Loconte, professor of history at The King’s College in New York City, lays out a Christian answer to the perennial question: “How can I know that life has meaning?” As a believer, I was greatly blessed by these meditations. Yet I would also leap to give this book to an unbelieving friend searching for a pastoral answer to doubt.

The subject of the book is the unique way God has dealt with our “valley of doubt” in the person of Jesus Christ. God does not simply thunder against our doubt from heaven. He actually comes down into our valley. God comes alongside us, experiencing all of our human frailties—yet without sinning or doubting. Jesus shows us the path out of doubt by being the path himself.

From Hope to Doubt

The Searchers is structured around Luke 24:13-35. This passage tells the story of two disciples on their way home from Jerusalem to Emmaus after the crucifixion. They are devastated; all their hopes have been demolished. But they meet a stranger who joins them along their path, and he points them back toward the messianic hope. When the stranger breaks bread in their home, the despondent travelers’ eyes are opened, and they realize this stranger is the risen Christ.

Loconte frames the story as an illustration of the human situation. In the spiritual Jerusalem of faith and hope, the fallen world constantly challenges us and sometimes crushes us. Our doubtful hearts long for an Emmaus, a place of safety where we can retreat from the spiritual difficulties of belief. Yet Christ is always alongside us on our road, pointing us back to Jerusalem.

While The Searchers is about perennial things, Loconte thinks the story of the road to Emmaus is particularly noteworthy for us in early 21st-century America:

Its significance seems especially important for our own day, a period marked not only by religious zealotry, but also by massive indifference to matters of the spirit. Many people seem too content with the quality of the faith, certain that nothing should disturb it. For them, their beliefs require no examination. Others, though, have given up any hope of discovering truths about God that they can hang on to. For them, there are no certainties in the realm of religion; it seems best to muddle through without them. Menachem Mendel, a rabbi in the 19th century, put it this way: “For the believer there are no questions, and for the unbeliever there are no answers.”

That claim, however, doesn’t ring true for most of us. Life has a way of forcing painful questions upon us, whether we welcome them or not. And the human heart has a way of keeping alive in us the longing for answers. To extinguish hope, either through neglect or cold rationality, would seem to diminish what it means to be human. The road to Emmaus, after all, is a road all of us find ourselves on—eventually. It is the path of every pilgrim who tries to make sense of the wilderness of the world around him (xxiv).

From Doubt to Faith

In each of the first six chapters, Loconte takes a verse from the Emmaus story and connects it to something that leads us to doubt. The world doesn’t seem to show us God. We all experience suffering and grief. Religion often cloaks evil. Worldly hopes ultimately fail. Humanity is so superstitious that it feels foolish ever to believe any report of miraculous events. And we are so accustomed to hidden agendas that it never quite feels safe to dismiss the cynical explanation of anything. Loconte discusses specific ideas, movements, practices, and influences in our own time that exacerbate these perennial sources of doubt.

Then, in each chapter, he shows us how Jesus answered these doubts by becoming a man and living among us. By appearing as a man, Jesus reveals the “hidden God.” By his compassion, suffering with us and for us, Jesus heals our grief. By challenging hypocrites and legalism, Jesus rebukes the “poison of religion.” By coming as “the hope of Israel” and fulfilling the biblical promises, Jesus proves that not all hopes are illusions. By appearing to so many after his resurrection, he excludes reasonable grounds for doubt (for them and for us). And he out-schemed all the world’s schemers by pulling off “the mother of all conspiracies,” the ultimate hidden agenda: providentially working all events together to fulfill his redemptive plan. 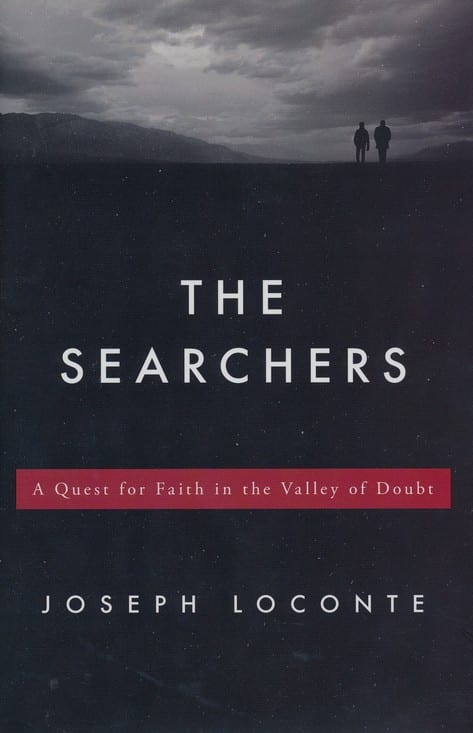 Never before had they known such hope. In a world drenched in violence and oppression, here was a man armed with a message of peace and freedom. Into lives nearly overwhelmed by grief and sorrow, he brought compassion and healing and the deepest joy. To people who felt like outcasts and aliens, he showed the way home. And then, in one devastating night, all their hopes collapsed. This is where our story begins—in the valley of despair. It is a tale of two friends, a stranger, and a search for truth in a world gone mad with doubt. Historian Joseph Loconte unlocks the meaning of their exchange, set in the chaotic days following the execution of Jesus of Nazareth. Drawing from literature, film, philosophy, history, and politics, Loconte shows how this biblical drama is an integral part of our own story.

In the last two chapters, Loconte reflects on the revelation of Christ and the disciples’ response in the Emmaus story, showing how Jesus fulfills the hopes that our doubt stifles—the hope for real joy and fulfillment, and triumph over death and hell. Then in the conclusion, Loconte gently and winsomely, but clearly and without compromise, shows that none of us is ever simply on the road. Each of us is facing either one way or the other. If you are facing Emmaus, you are turning your back on hope—and sooner than you think, it will be too late to reverse course.

Faith in the Valley

This outline doesn’t begin to do justice to the book itself. Writing a book that speaks powerfully both to believers and unbelievers is no small feat, and Loconte succeeds brilliantly. Widely read, he has a knack for constantly bringing in just the right quote or reference—from ancient epics and philosophy to journalism and pop culture.

I can see two ways the book might have been even better. When engaging with opponents of faith, Loconte rightly avoids a full-dress apologetic, since this is not the place. Given that constraint, he might have done better to invest less of his time in engaging specific opponents. It invites an expectation of an apologetic that doesn’t materialize. And since this book meditates so extensively on the humanity of Jesus, I think it could have been even more powerful if it had said more about the divinity of Jesus. Loconte doesn’t neglect this theme entirely, but a little more attention to the heights of Jesus’ divinity would deepen our awe at the humility of his humanity.

But these are minor concerns. Do your faith a favor and read The Searchers. Then find a searcher, and do his doubt a favor: give him a copy.