The cross and resurrection of Jesus Christ are an assault on our sensibilities, an affront to our common sense, an insult to our intelligence—in a word, everything about the cross and resurrection of Jesus Christ is an offense to our psyche. It is pure scandal unless, of course, we’ve been given eyes to see the glory in this climactic, redemptive act of God in Christ. Indeed, what the world sees as scandalous, the believer interprets as spectacularly glorious. This is the argument of D. A. Carson’s latest book, Scandalous: The Cross and Resurrection of Jesus.

But Carson recognizes that we live in a post-Christian, biblically illiterate culture where understanding of these events cannot be assumed. Therefore Scandalous is “a modest attempt to summarize not only what happened but also what they mean—in short, to provide an introductory explanation of the cross and resurrection” (13). 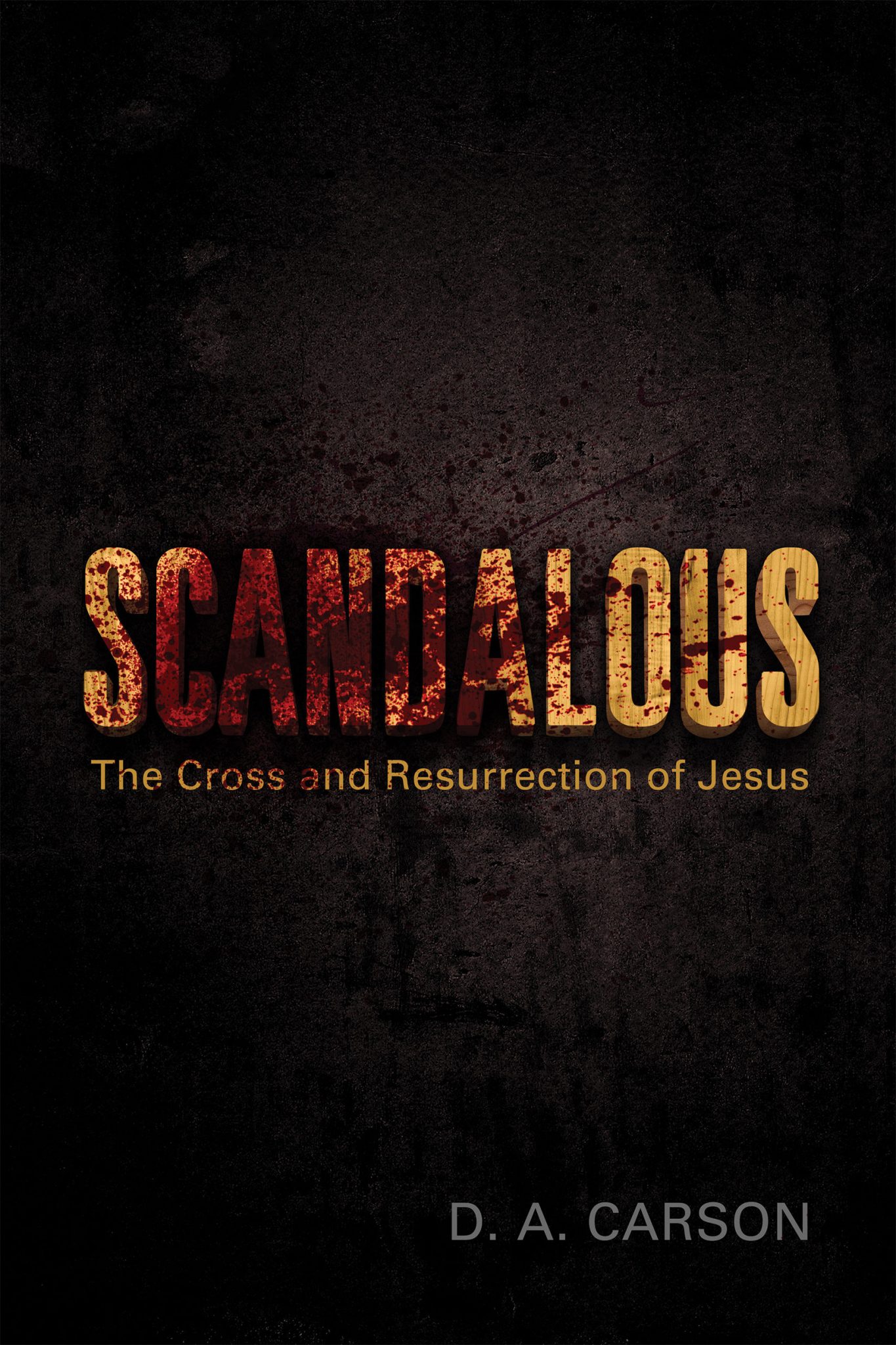 Scandalous: The Cross and Resurrection of Jesus

Scandalous: The Cross and Resurrection of Jesus

How are Christians to approach the central gospel teachings concerning the death and resurrection of Jesus? The Bible firmly establishes the historicity of these events and doesn’t leave their meanings ambiguous or open to interpretation. Even so, there is an irony and surprising strangeness to the cross. Carson shows that this strange irony has deep implications for our lives as he examines the history and theology of Jesus’s crucifixion and resurrection.

Following are four reasons to read this book:

I am glad this book had its seedbed in the pulpit, for what we have in each of the five chapters is model exposition. Pastors should read this book, if for no other reason, to learn (or re-learn) how to preach. And laypeople should read this book so their expectation for the preaching of their pastors is appropriately high.

Carson stays tethered to the text and labors to unpack what is there (exegesis) rather than imposing his own interpretation on the text (eisegesis). His excursions into historical-cultural analysis and word studies never seem like ends in themselves, but actually serve to advance the exposition of the text. Carson also helpfully allows Scripture to interpret Scripture giving the reader a better appreciation for the harmony of the canon on a particular biblical idea. Finally, Carson is determined to draw out applications of the text from the meaning of the text.

For example, after discussing the fact that Jesus, after learning of Lazarus’s condition, delayed an extra two days before going to him (John 11:5–6), Carson applies this principle of God’s delaying to us: “But God takes the long view, and he understands that sometimes delay is what is best for us.” Then, after quoting Romans 5:3–5, Carson writes: “You get the impression from this passage that both Paul and God share this vision that the development of character, perseverance, and eschatological hope are more important than simply relief from suffering” (121).

2. The Centrality of God

In a culture like ours where people have “Fan Pages,” “Followers,” and “Subscribers” it is easy to fall prey to a subtle narcissism that begins to see everything, including salvation, as all about us. Carson won’t let this happen. He is relentless in reminding the reader of the Godward focus of the cross and resurrection.

For example, in his explanation of propitiation (a sacrificial act by which God becomes favorable to sinners), Carson says things like this: “In Christian propitiation, God the Father sets forth Jesus as the propitiation to make himself propitious; God is both the subject and object of propitiation. God is the one who provides the sacrifice precisely as a way of turning aside his own wrath” (64–65, emphasis his). And then, in a summarizing statement on what justification is, Carson leaves no room for the exaltation of man: “Justification is first and foremost about the vindication of God. God simultaneously preserves his justice while justifying the ungodly. This is the heart of the gospel” (67).

Another example of the centrality of God is seen in Carson’s exposition of John 11:25–26. What is of special interest to Carson here is how Jesus comforts Martha in her grief. He doesn’t do it by something trite like “feeling her pain” or “giving her the right to feel sad.” He does something infinitely more helpful. Jesus goes into the tempest of Martha’s grief and turns her attention to him. “He diverts attention from her grief to his own transcendent claims” (128). The potential responses to this Godward movement by Jesus are not lost on Carson: “Believers will understand that this is spectacularly encouraging and glorious; others will interpret Jesus’ approach as scandalously egocentric” (129).

3. Affirmation of the Spiritual

Consider Ephesians 6:11–12: “Put on the whole armor of God, that you may be able to stand against the schemes of the devil. For we do not wrestle against flesh and blood, but against the rulers, against the authorities, against the cosmic powers over this present darkness, against the spiritual forces of evil in the heavenly places.” Do we believe this? Carson does. And his exposition of Revelation 12 cuts right to the heart of our idolatrous preoccupation with all things temporal.

After outlining various challenges confronting the Western church, Carson asks: “But have you noticed the categories we have used in this discussion of what ails the church in the West? They are all sociological, historical, occasional, demographic, economic, psychological, medical. They are all performance-related, circumstance-related. There is nothing about the Devil—and nothing about God” (78). Carson draws out the tragic implication of this type of analysis: “But if all of our analyses are restricted exclusively to such categories, the huge danger is that our solutions will be cast in such categories too. Our answers will be superficially sociological because we do not probe deeply enough to analyze the cosmic tension between God and the Devil. And then, quite frankly, we do not really need God” (79).

Throughout Carson’s exposition of Revelation 12 he presses us to see what all the children of God are grafted into, namely, this “massive struggle between the church of Jesus Christ and the rage of Satan” (95). Indeed, “Our present conflict belongs to this cosmic scope” (92). The effect of this focus for the reader is to lift our gaze heavenward and away from the temporal and naturalistic analyses of our time. It grounds us in biblical and theological realities. It helps us realize what a “great salvation” we have (cf. Heb. 2:3).

If Carson wasn’t a professor, you would think he was a pastor. Or, perhaps he’s just a good Christian professor. I say this because Carson models what he said he would do in the opening lines of the book: he never treats the events of the cross and resurrection as mere pieces of raw data. He takes the Bible seriously as if God was actually speaking to humans through it.

At the close of chapter two after a lengthy discussion of justification, Carson asks: “Do you believe? Or do you find yourself among the millions who begin to glimpse what the cross is about and dismiss the entire account as scandalous? A living-and-dying-and-living God? A God who stands over against us in wrath and who loves us anyway? A cross where punishment is meted out by God and borne by God? Scandalous!” (70)

The effort to make all of this personal is perhaps best seen in Carson’s treatment of Thomas and his repeated use of the word “my” in John 20:28. Upon seeing Jesus and feeling his wounds, Thomas exclaims: “My Lord and my God!” To be sure, Thomas’s confession was intensely personal and an example of sincere devotion. Carson warns: “If you cannot utter the words of this confession with similar deeply personal commitment, you have no part of Jesus and the salvation that flows from his death and resurrection. Your heart and mind must confess with wonder, ‘My Lord and my God!’” (163)

In the end Carson accomplishes what he set out to do—he provides an introductory explanation of the cross and resurrection of Jesus Christ. But thankfully for the church he does far more, making this a book that, I pray, finds its way into countless people’s hands.