Saved by Faith and Hospitality. It’s a title, and a book, that’s meant to knock you off balance.

The provocative title comes from a letter at the end of the first-century known as 1 Clement. Clement mentions three times that Abraham, Lot, and Rahab were saved by faith and hospitality. This may come as a surprise to Protestants, but it’s true that God’s promise to Abraham is confirmed in Genesis 18 after he demonstrates his piety by offering hospitality to the three men (Gen. 18:1–15). In a similar way, Lot’s hospitality to the divine visitors is part of the basis for God’s rescue of Lot’s family (Gen. 19:1–3). And Rahab’s faith is manifested in her welcoming the spies in peace (Heb. 11:31).

Hospitality isn’t only central for the Christian life; it’s integral to the nature and work of God.

In the first part, Jipp shows how Scripture portrays Jesus as God’s host who welcomes sinners to his table. One way to understand Jesus’s quote in Luke 4:18–19 (usually translated “to proclaim the year of the Lord’s favor”) is to read it “the year of the Lord’s welcome.” Outsiders become insiders in Jesus’s ministry as he spreads the “welcome” of the Lord to strangers and sinners. Jesus also spreads a banquet feast for people as he feeds them—a practice the early church continues as they break bread in their homes.

Jipp also looks to Paul, who commands those in Corinth to wait for one another before eating the Lord’s Supper, since it’s fellowship in Christ’s blood. The apostle also argues that Christ provided the sacramental drink to Israel in the wilderness and that Israel’s idolatry involved food (1 Cor. 10). The same type of argument plays out in Romans and Philippians.

In the Gospel of John, Jesus comes as the heavenly stranger who enables those on earth to partake in God’s hospitality. The Son of God offers hospitality through wine, water, bread, and foot washing. He gives people life by offering himself, and he does so with images that point to God as the ultimate provider of hospitality.

Saved by Faith and Hospitality not only examines biblical texts, but does so with an eye to our present moment. In the second part, Jipp explores how God’s hospitality compels human hospitality and enables the church to overcome three challenges to extending hospitality. First, Paul learns how to be a good guest with non-Christians and to engage in friendship with the hope they will encounter Jesus. Second, the story of Israel confronts the posture of xenophobia by giving Christians an immigrant identity, too. Third, after examining the economic structures that facilitate greed, Jipp calls for a recovery of almsgiving to combat greed as an inhibitor of hospitality. 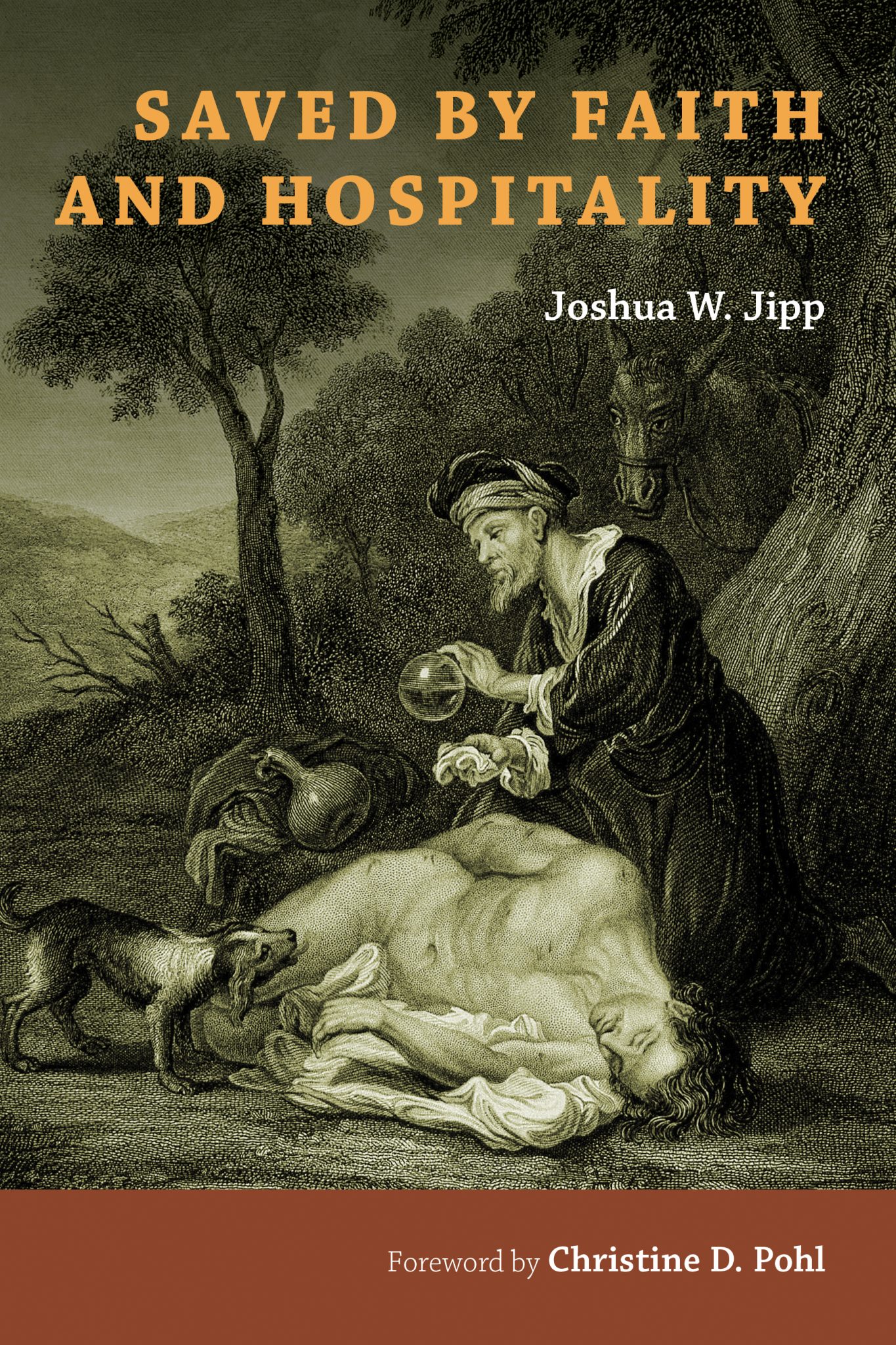 Jipp first provides a thorough interpretation of the major biblical texts related to the practice of hospitality to strangers, considering especially how these texts portray Christ as the divine host who extends God’s welcome to all people. Jipp then invites readers to consider how God’s hospitality sets the pattern for human hospitality, offering suggestions on how the practice of welcoming strangers can guide the church in its engagement with current social challenges—immigration, incarceration, racism, and more.

This book sheds light on a pervasive biblical theme that offers necessary context. For example, Paul writes that qualified elders must be hospitable (1 Tim. 3:2). This command may sound out of place—until you realize it stands in the rich tradition of biblical hospitality. We often pass over texts about hospitality, assuming they largely apply to an ancient culture, but they are incredibly practical for us today.

I also enjoyed that Jipp explored what it means to be a guest. When we speak of hospitality it can be easy to slip into thinking we’re always the “givers” to the needy, but Jipp reminds us that we must learn how to be a good guest. This includes being receptive, friendly, adaptable, and understanding to our hosts.

Finally, this book interacts in a deep and learned way with Scripture and connects it with contemporary life. Too often books fall off on either side, either doing all exegesis or jumping too quickly to practical application. Jipp’s book is a model of how to bring orthodoxy and orthopraxy into one volume.

Overall, I enjoyed Saved by Faith and Hospitality and will be commending it to others, but I do have a few questions and cautions.

First, I wonder how Jipp would respond to questions about the distinction between hospitality in the Old and New Testaments. While he focused on the New, he regularly went to the Old to support his case. But in the Old Testament God gives commands to a socio-political nation, whereas in the New he gives commands to a community that’s no longer such a nation.

Third, while I appreciated the political and social implications of hospitality Jipp highlights, at times I questioned whether there was confusion between America as a nation and the commands for Christians as a new society within the world. While Christians should want their Christian ideals to inform their politics, we must also recognize the diversity of our nation. Therefore, we must be careful of connecting Israel as a nation in the Old Testament, or what Christians should do as individuals, to what America should do as a nation.

The above questions are necessary, but sometimes we can use questions as an excuse to keep from obeying what is clear in Scripture. Saved by Faith and Hospitality calls us to see hospitality’s omnipresence in the Bible—and then go out and imitate how God has welcomed us.

The book is written at an academic level, but in some sense, this is where its power lies. Even if one doesn’t agree with all of Jipp’s exegetical conclusions, he ably shows the importance of hospitality as a way of life for Israel, Jesus, Paul, and new-covenant believers today.

​Patrick Schreiner teaches New Testament and Greek at Western Seminary in Portland, Oregon. He blogs at Ad Fontes, and you can connect with him on Twitter.

2 Should Followers of Christ Use Recreational Marijuana?

Have We Missed the Honor-Shame Focus in Scripture?

The Ten Commandments of the God of Consumerism