Yet in the study of church history, women remain largely in the background, if not altogether silent. Some of this neglect originates with the difficulty of documenting the religious lives of American women. Pastors and theologians—mostly men—have been the most likely to leave published records behind, and especially in the colonial and Revolutionary eras, sources from women are few and far between.

Some neglect of women’s voices has persisted, however, even when we do have sources. In 2006, I published an article on the reportedly miraculous healing of Mercy Wheeler of Plainfield, Connecticut, during the First Great Awakening. Although her healing narrative was printed repeatedly from the 1740s to the early 19th century, I could hardly find references to her experience in any histories, scholarly or otherwise.

Sarah Osborn represents an even more glaring omission in the literature on American evangelicalism, one now addressed by Catherine Brekus’s remarkable Sarah Osborn’s World: The Rise of Evangelical Christianity in Early America. Osborn was one of the most influential evangelicals in 18th-century America, and she left a vast body of sources, including a memoir, ten volumes of diaries, and scores of letters. (Sadly, only 2,000 of an estimated 15,000 manuscript pages of her writings survive, the others somehow lost over the centuries since her death.) Yet aside from some scholarly articles, Osborn has languished in obscurity until now. (Brekus, associate professor in religions and the history of Christianity at the University of Chicago Divinity School is also preparing to publish an edition of Osborn’s writings.) Brekus not only introduces us to Osborn’s personal story but also deftly places it in a frame of 18th-century history, showing how Osborn interacted with slavery, the Enlightenment, emerging capitalism, and other developments associated with “modernity.”

Osborn’s life was full of earthly struggles and passionate devotion to Christ. She processed those struggles and that passion by writing. She felt an incredible burden to write, echoing the prophet Jeremiah that God’s Word was in her heart “like a fire, a fire shut up in my bones.”

“I am weary of holding it in,” she said. “Indeed, I cannot.” Osborn wrote in a raw, flowing style unadorned by conventions of spelling or punctuation.

Rather than a conventional birth-to-death biography, Sarah Osborn’s World allows Osborn’s writings to drive the story. Osborn was born in England in 1714, the same year as the great evangelist George Whitefield. In the 1720s her family moved to New England, finally settling in Newport, Rhode Island, where Sarah would spend most of her life. She struggled with depression (or what colonists called “melancholy”) during her teenage years, frankly admitting she even contemplated suicide. Marrying at 17, Osborn lost her sailor husband to death at sea two-and-a-half years later, not long after giving birth to a son. That son would also die at a tragically young age, the pain of which Brekus depicts in a heartbreaking section of the book. Soon the young widow developed rheumatoid arthritis, which would afflict her for the rest of her life. 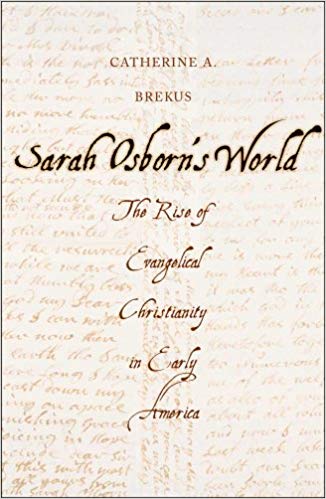 In 1743, sitting quietly with pen in hand, Sarah Osborn pondered how to tell the story of her life, how to make sense of both her spiritual awakening and the sudden destitution of her family. Remarkably, the memoir she created that year survives today, as do more than two thousand additional pages she composed over the following three decades. Sarah Osborn’s World is the first book to mine this remarkable woman’s prolific personal and spiritual record. Catherine Brekus recovers the largely forgotten story of Sarah Osborn’s life as one of the most charismatic female religious leaders of her time, while also connecting her captivating story to the rising evangelical movement in eighteenth-century America.

Osborn was a mature 23-year-old, then, when in 1737 she entered a season of spiritual struggle that led to her conversion. During a communion service she had a vivid mental impression of the crucified Christ. She then came to realize that he had died for her. But her conversion didn’t lead immediately to assurance of salvation, and when she heard Whitefield and Gilbert Tennent preach beginning in 1740, she wondered if the 1737 experience had been authentic. Direct counsel from Tennent boosted her confidence, and by the time she got remarried to Henry Osborn in 1742, she began to emerge as one of Newport’s most formidable evangelical figures. Not coincidentally, she also began to write, finishing her memoir in 1743.

Friends of The Gospel Coalition should know that while Brekus offers a deeply empathetic portrayal of Osborn’s Calvinist piety, she admits it’s a piety she doesn’t share. Brekus says she is “ambivalent” toward Osborn’s “vision of a God who deprives us of genuine freedom and rejoices in violence and damnation.”

Some might turn away from Sarah Osborn’s World because Brekus isn’t a Calvinist insider, but I think that would be a mistake. Even if Brekus doesn’t always appreciate the sweet comforts that accompany the stark majesty of Calvinist theology, she displays real sensitivity toward Osborn’s struggles to synchronize God’s sovereignty with the tragic realities of her life, not least the death of her beloved 11-year-old son. Anyone who has dealt with tragedy as a believer will resonate with some of Osborn’s emotions as her son, for whom she’d prayed endlessly but who showed no clear signs of conversion, slipped away from her.

Osborn’s life had its mountaintop experiences, too, and none greater than a revival in mid-1760s Newport that centered around prayer meetings held at her home. Five hundred people a week crowded into her house, many of them free blacks and slaves. Sarah’s arthritis had become so debilitating that she often couldn’t walk, but her faith in the midst of that trial only enhanced the credibility of her testimony.

Osborn was also instrumental in securing the controversial Samuel Hopkins, one of Jonathan Edwards’s key theological successors, as pastor of her church (First Congregationalist of Newport) in 1770. When she died in 1796, she gave her precious manuscripts to Hopkins, who published her memoirs in 1799. Reflecting on her future state with the Lord, she once wrote, “O transporting thought! O glorious resurrection! Then I shall gaze into eternity. Then shall I drink my fill. Then I shall be like him, for I shall see him as he is.”

Thomas S. Kidd is the Vardaman distinguished professor of history at Baylor University and the author of many books, including Who Is an Evangelical? A History of a Movement in Crisis (Yale, 2019); Benjamin Franklin: The Religious Life of a Founding Father (Yale, 2017); Baptists in America: A History with Barry Hankins (Oxford, 2015); George Whitefield: America’s Spiritual Founding Father (Yale, 2014); and Patrick Henry: First Among Patriots (Basic, 2011). You can follow him on Twitter.