Most Bible majors and seminary students over the last two generations have heard “the reformers” and their followers botched it badly on reading Paul—a view advanced over a century ago by noted Pauline scholar Albert Schweitzer. Krister Stendahl rearticulated the view in the 1960s. Then E. P. Sanders, James Dunn, and N. T. Wright extended it in various ways, which resulted in what’s now called the “New Perspective on Paul.” Today, it’s about as new as anything else that emerged half a century ago. But its effects are still with us, they are not all healthy (though a few are), and examination of the issues it has raised can be entirely proper and helpful.

Setting Out for Answers

Reformation Readings of Paul: Explorations in History and Exegesis—edited by Michael Allen (professor of systematic and historical theology at Reformed Theological Seminary) and Jonathan Linebaugh (lecturer in New Testament studies at the University of Cambridge)—belongs to a genre that probes New Perspective issues. It concedes Reformation readings aren’t sacrosanct; they require analysis and careful comparison to the New Testament-era texts they claim to appropriate. But this book also understands the New Perspective has a soft underbelly: its dismissal of Reformation-era biblical exegesis, and the theology that resulted, on insufficient grounds.

Did New Perspective patriarchs beginning with Schweitzer really read and grasp the substance of the reformers’ exegetical arguments? Or did they erect and knock down straw men? This book sets out to answer that question. In its own words:

While contemporary writing on Paul is littered with references to the “Lutheran Paul” or the “Paul of the Reformation,” what is equally conspicuous [in the work of New Perspective scholarship] is the absence of detailed engagement with the exegesis and theology of the reformers. (13)

To provide such detailed engagement, the five reformers listed above are assigned to two analysts. One is a historical theologian, the other a Pauline scholar. While this review isn’t the place for a detailed account of each portion of the book, its appeal lies largely in (1) the significance of the reformers selected, and (2) the quality of the scholars enlisted. Here, briefly, is each reformer with the portion of Scripture chosen for analysis, the historical theologian, and the Pauline scholar:

So how do the reformers fare under such scrutiny? 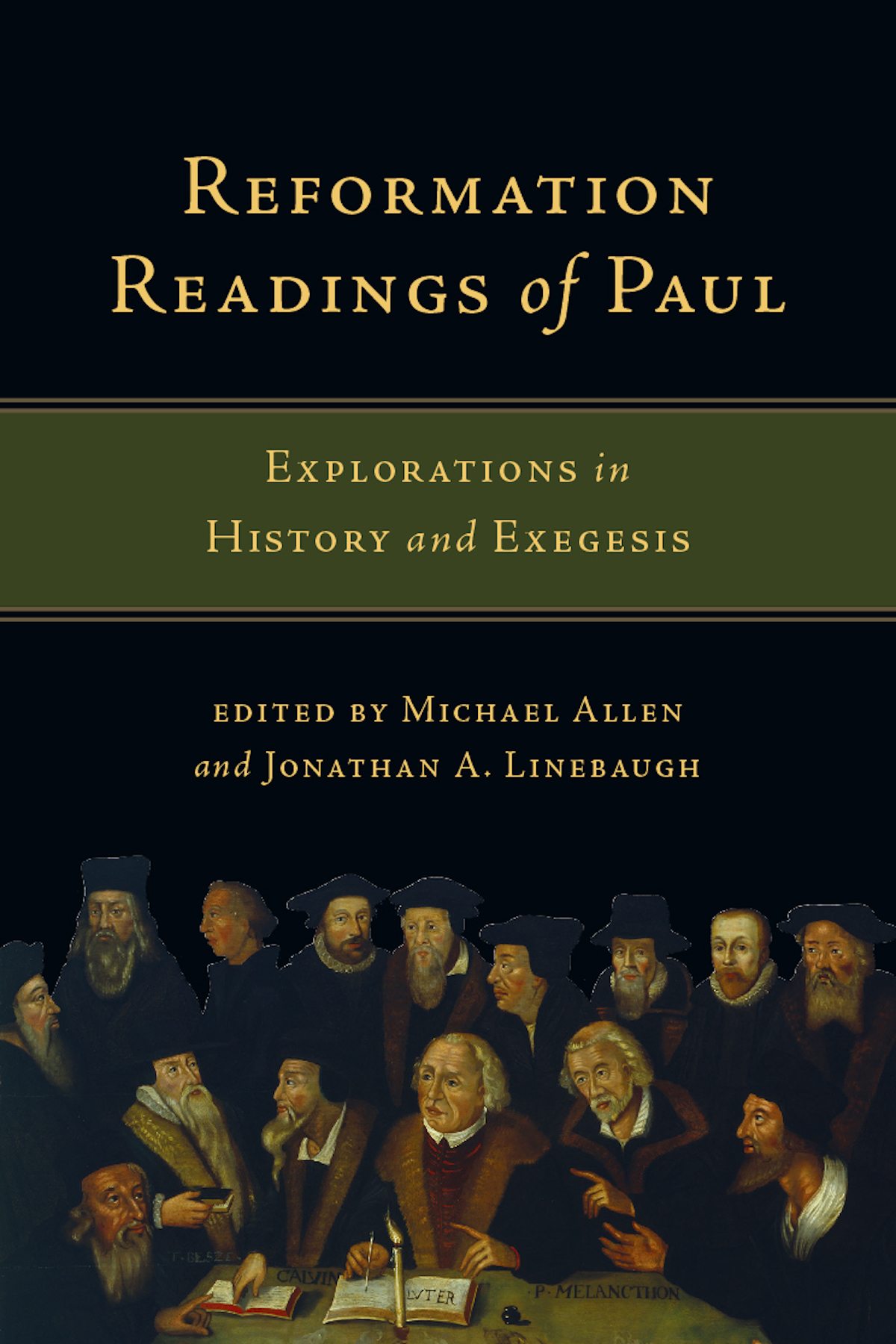 Michael Allen and Jonathan A. Linebaugh

Michael Allen and Jonathan A. Linebaugh

It varies. Fink and Barclay give Luther high marks for his time. But his understanding of Galatians and its message is useful to us primarily as a monument that needs to be transcended. Barclay sides with New Perspective hermeneutics in denying the validity of interpretation that seeks to distill “timeless principles” from the first century to apply in Luther’s day or ours (68).

Kolb and Seifrid, in contrast, commend Melanchthon for his time as well as his relevance for today. In Seifrid’s words, he “remains a much better reader of Paul than many of our contemporaries, especially the advocates of the ‘new perspective’” (119). Regarding Bucer, Lugioyo and Hill are more positive than not, particularly in their affirmation of his theological reading of Ephesians, an approach not applauded in New Perspective circles (where many would doubt Paul’s authorship of Ephesians).

Allen and Ortlund cast Calvin in a positive light. Allen portrays him as just as able a theologian of the cross as Luther. Ortlund presents him as worthy of commendation today, especially if his “personal-soteriological” stress is augmented by the “cosmic-eschatological dimension of Paul’s hermeneutic” brought to the fore by many—from Geerhardus Vos and Oscar Cullmann to George Ladd and G. K. Beale (205–08).

Null gives an erudite and penetrating exposition of the first Protestant archbishop of Canterbury’s migration, in his 40s, from seeing “salvation as a matter of due divine process” to sola-fideism, a message of justification by faith that resulted in “children with love printed on their hearts” by the grace of Christ (230–31). Linebaugh calls attention to Cramer’s sophisticated emulation of Paul’s christological (not anthropological) representation of faith. Faith that saves is God’s doing all the way down; it’s not a “bizarre sort of work in which Christians jump through the entranceway of salvation” (247, quoting Richard Hays).

Ending with a Bang

Reformation Readings of Paul ends with a bombshell: Gerald Bray’s free-standing essay, “The Story of Reformation Readings.” It’s a vigorous repudiation of the New Perspective’s snubbing of the reformers and Reformation theology. While the mode of discourse is primarily narrative, tracing exegesis of Paul from patristic times forward, it is didactic in intent.

Bray seeks to school the reader in how the Reformation arose and how spiritual transformation constituted the heart of its energy. “The problem with the reformers’ modern critics is that they downplay the spiritual dimension that makes sense of the teaching of both Paul and Luther” (272). These critics are “primarily interested in intellectual enlightenment, which they believe they have found and need to communicate to whoever will listen” (274).

In contrast, the “Reformation followers of Paul and Luther . . . were seeking spiritual transformation, which comes to those to whom God chooses to reveal himself” (274). Those who share that Christologically rich experience understand both Luther and Paul; “they are one with both men in the Spirit, just as they are one with the saints of every age” (274). We don’t need a new perspective to grasp Paul, the reformers, or their respective message; we need “a new life in Christ” by which we can “make sense of both and reconcile them in the all-embracing power of the Spirit of God” (274).

Bray’s essay is a surprising and brilliant ending. It gives a plausible narrative for Pauline readings through the ages, during the Reformation, and today. New Perspective supporters will find it disappointing; but if Bray is correct, their readings of Paul will continue to miss the culture-transcending light he encountered in Christ and spent his post-Damascus life seeking to spread. This the reformers didn’t miss, as most of the essays in this fine volume demonstrate.

While this is an academic book—all the authors but one hold academic posts—pastors and well-read laypersons can profit from it in three ways.

The first two essays (by Fink and Barclay) deny that Luther’s reading of Paul remains valid today—we (or at least current scholars who know better) must now transcend it. The book’s other essays, while allowing for differences between their times and ours, insist the reformers got it right. We can preach the biblical truths that rocked their lives and world in the confidence that these truths are no less saving and transforming today. Read and learn from the reformers! Don’t be surprised and discouraged that some big names in scholarship will disparage your effort. Ortlund speaks of “modern Pauline scholars going beyond fresh creativity into unhelpful idiosyncrasy” (203).

If the reformers got the gospel message right (and most essays in the book argue they did), pastors will still be learning from the reformers 5, 50, and 500 years from now, as has already been the case with Luther and Calvin. The reformers open up the Scriptures to us and so enable us to preach the Christ revealed there. Pastors who break with the reformers (as fresh studies on a regular basis urge them to do) will become part of a history museum of attempts to replace the historic gospel message with a purportedly superior replacement. We can look at mainline Protestant churches in the West to observe likely results. And weak “conservative” churches whose pastors don’t study but preach platitudes offer an equally unpleasant spectacle.

Melanchthon’s stress on universally valid truths—on righteousness, faith, justification law, works, grace, etc.—is a necessary corrective to contemporary evangelical infatuation with “the construction of a ‘story line’ for the interpretation of Scripture—to its loss” (99 n. 5). For those who appreciate biblical theology, this might sound jarring. Let me explain. There was a time when some evangelicals were doctrinally fixated and didn’t grasp the salvation-historical (or narrative) unfolding of the biblical story of salvation. So “story line,” emphasizing the flow of redemptive history, was a necessary corrective.

Now younger evangelicals (I observe, because I teach them) are all about the story line. So far so good. But they often lack concern for doctrinal precision, or indeed for doctrine at all. In the same way Calvinists (according to the stereotype) used to be infatuated with TULIP, evangelicals are tempted to think that if they know creation-fall-redemption-restoration (or some variation of it), they’ve got the Bible’s message. Half or more evangelical students entering seminaries flunk basic Bible literacy exams. But they know, or can easily learn, a five- or six-point narratival framework—but with nothing much beyond experience and imagination to put in it.

I believe it’s just as important for the church to know its Bible and doctrines as it is to know its story line heritage. Melanchton reminds of us the importance—indeed the glory—of doctrinal knowledge and its fruit that we’re missing today in a facile appeal to narratival theology. For pastors, therefore, Melancthon models a concern for doctrine that is no less important than appreciation for metanarrative.

Bucer’s approach to Bible interpretation is an excellent refresher course for pastors who labor weekly in exegesis to inform their teaching and preaching (126–29). Calvin’s Corinthians commentary contains some 70 passages of “pastoral reflection” (174), relating 1–2 Corinthians to the pastoral task.

Pastors are understandably hungry for reading that will renew them in their study of Scripture and infuse them with fresh zeal for their exhausting pastoral labors. This is one of the most valuable services of the book.

3. This book is a fresh invitation to (re)join Jesus’s school of discipleship for our salvation, the church, and mission to all places.

Models of church identity and activity abound—and many are promising—but none can succeed at God’s work without Christ’s manifold presence, by the Spirit, through the Word. This requires teachers who read deeply, reflect constructively, and communicate truly what the Scriptures say. At point after point, and in varied historical circumstances often analogous to ours, the reformers point the way.

No post-apostolic period’s readings of Scripture is definitive, for God’s enscripturated mysteries transcend human understanding. But some periods’ breakthroughs retain perennial value for reminding the church in later eras (like ours) of what we overlook or ignore in Scripture to our peril. The Reformation was such a period. Reformation Readings of Paul (and Bray’s closing essay in particular) is a powerful tool for reconnecting us with learned leaders through the ages and around the world whom God has set apart to “prayer and to the ministry of the word” (Acts 6:4). Their best findings cry out to be rearticulated in our times.