When a scholar of Darrell Bock’s stature speaks, the church does well to listen. And when he speaks on a topic of such centrality as the gospel in his new book, Recovering the Real Lost Gospel: Reclaiming the Gospel as Good News, the church must listen.

Rick Warren’s foreword and Bock’s own introduction lays down a gauntlet, calling readers to move past possible truncations. The gospel is “far more than just a transaction for sin,” even though a transaction lies at the heart of the matter. Bock only briefly mentions the current debates over the nature and definition of the gospel and avoids naming names, but he clearly intends to join a conversation. Rather than narrowing the gospel down as much as possible or choosing to debate interlocutors, Bock pursues a “biblical theology of the gospel” by asking Scripture what it says about the gospel. From this vantage point, the cross is central, but it is a hub and not the whole of the gospel.

The first chapter, “The Gospel Starts with a Promise: Relationship in the Spirit,” opens with a stunner: “Just for a moment, forget about sin.” Bock instead asks us to consider “the deep needs that define our humanity,” particularly our desire for relationship. He traces through the “gospel’s backbone”: the covenant promises with Abraham and David and the promises of a new covenant in Ezekiel and Jeremiah. In these passages God promises, “A new heart. A new Spirit. A new start.” And through a promised King, God will bring forgiveness and a restored relationship with God.

Bock deftly traces the fulfillment of the new covenant promises in the giving of the Spirit in Luke-Acts. He regenerates the older evangelical emphasis on being born again with biblical-theological depth. The new covenant (kingdom would be a nice, fitting adjective!) promises are foundational to the NT and its gospel. Such elements are often mentioned when preaching Acts, even if they are ignored or stripped down in contemporary evangelicalism. Even if many contemporary evangelicals have no sense of the Spirit’s role in the gospel, “The key role of the Spirit in the new life is a central idea of the gospel” in line with OT promises. Bock summarizes the implications: “The gospel is not about a death but about a death that leads many into life.” This new life is summarized as “a new vibrant relationship with the gracious and self-sacrificing God who created us to know and follow him.” God has now delivered on his promise of “a new responsiveness etched into his children’s hearts.”

Bock reiterates that the theme of forgiveness is not a stand-alone benefit in the second chapter, “The Gospel Is a Meal and a Washing.” Bock takes a symbolic approach to the sacraments while insisting that they create a tangible community and relationships. “The first picture of the gospel focuses on Jesus’ death not as an end but as the beginning of a new era.” The meal illustrates “more than merely making a transaction to remove sin . . . it also brings us into fellowship with God and his people.” Likewise, baptism in Romans 6 is not a “picture” of passive participation in Christ’s burial but of being washed through death of Christ and “raised with him into new life” so that we “can walk in a new way of life.” 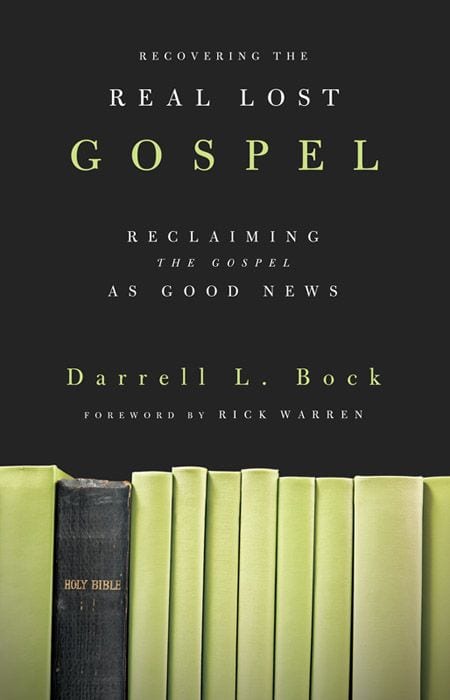 While some seek so-called lost gospels, Darrell L. Bock suggests the real lost gospel is the one already found in the Bible and reminds everyone of what it means: good news.

In chapter three Bock addresses the cross but does not limit himself to penal substitutionary atonement. (The doctrine is not named, but the essence is here, as Bock cites Jesus as “paying the penalty incurred by sin.”) He repeatedly affirms that a reconfiguration of vertical and horizontal relationships has occurred, citing Galatians 6, Ephesians 2, and 1 Peter 1 as indicative of this change, summed up as “new way . . . new relationship, new power, and new access to the living God.” His approach is similar to that taken by his doktorvater, I. Howard Marshall, who sums up the cross and atonement in reconciliation, but without dispensing of penal substitutionary atonement.

Chapter four robustly affirms Augustinian and Reformational grace in the gospel and clearly presents justification by faith apart from works. Bock also affirms the importance of works by appealing to Jude, 1 Peter, and Paul. “Why does God save us? So that we can again be useful, fulfilling the design that He originally had for us . . . a life of positive labor for God.” Salvation in Ephesians 2 “is perfectly balanced: It says yes to faith, yes to grace, and yes to works.”

Chapter five tackles Christology, asking whether it is kosher for Jesus to be put in God’s place. Bock helpfully summarizes the best of recent work (such as Bauckham) on the divinity of Jesus, but evangelicals are more likely to need help with the humanity of Jesus as the true image-bearer (Col. 1:15). This chapter lacked adequate emphasis on Davidic sonship and its significance for the gospel in light of resurrection and enthronement.

Bock takes up word studies on turning, repenting, and faith in chapter six, “Embracing the Gospel: Repentance and Faith.” He emphasizes that these three elements constitute “relational reliance”: an appropriate, trust-saturated response to God’s grace. Chapter seven and the conclusion recapitulate much of the book’s content: grace, faith, relationship, and renewal are prominent themes. Bock also exhorts readers to evangelize in these chapters.

In an appendix Bock affirms the responsibility of the church to “live out” or illustrate the gospel in behavior. Preaching the word without service—“showing God’s love for people”—is the result of “dichotomized thinking” that “is not biblical.”

Bock could have been clearer on some of the “kingdom” aspects of the gospel, such as the lordship of David’s son (a key element in OT promise and NT fulfillment passages as well as in gospel definitions in Rom. 1:1-4 and 2 Tim. 2:8). The gospel’s kingdom dimension is summed up as the “promised rule of deliverance,” and while that is true, his kingdom perspective could be enriched. Bock could have more fully explored the good news of new creation, the enthronement of humanity, and the restoration of God’s design. The implications of Psalm 8, Romans 8, and Revelation are never explored, and Bock starts seeing the gospel in Genesis 12 rather than in Genesis 3:15 and the original design and program of Genesis 1-2. Many of the same readers who have undervalued covenant and Holy Spirit will also be ignorant of the fact that they are not fully adopted until they have resurrection bodies and inherit the earth in fulfillment of God’s original design (Rom. 8:17-23).

One more stunner for some readers: Bock nowhere mentions the imputation of Jesus’ righteousness to believers. He does not cite 2 Corinthians 5:21, Romans 5:15-17, or Phillippians 3. Various passages in Romans and 1 Corinthians 1:30 are not interpreted along the lines of imputed active obedience, but as God declaring us righteous on the basis of faith. (As Brian Vickers observes in the fullest recent study of the doctrine, the imputed righteousness of Jesus is an inference from multiple texts, the result of theological analysis rather than pure exegesis.)

Recovering the Lost Gospel gets readers thinking freshly about the New Testament’s gospel by addressing many different aspect of gospel renewal, from restored relationship to new power. Bock’s presentation of oft-neglected gospel themes (including covenant promises, new covenant, personal renewal, and Holy Spirit) is the book’s greatest strength. Among other gems, he shows readers that Luke 3:16 is “a verse as relevant to the gospel as John 3:16,” and he avoids writing lordship out of the gospel. Bock has done the church a service by providing a sound text that contributes to the ongoing conversation on the greatest of all possible topics. He achieves what he set out to provide: a much fuller and robust presentation of the grand biblical gospel than many readers will have seen or heard.

Jason Hood (PhD, Highland Theological College and University of Aberdeen) is the pastor of North Shore Fellowship (PCA) in Chattanooga, Tennessee. He has also served as assistant professor of New Testament at Gordon–Conwell Theological Seminary, and is the author of Imitating God in Christ: Recapturing a Biblical Pattern.