Allen Guelzo, in his recent work Reconstruction: A Concise History, helpfully summarizes one of the most important and neglected periods in American history: the movement to reconstruct a nation divided by the Civil War.

Guelzo is a Civil War historian at Gettysburg College in Pennsylvania, and his book goes a long way to explaining why a nation that eradicated the blight of slavery allowed nearly a century to pass before African Americans enjoyed the most basic of civil rights.

Reconstruction, simply put, is the “twelve years of active efforts to rebuild and reconstitute the American Union after the attempt by the Confederate States of America to secede from it” (1). Consider the difficulty of the task. It took a bloody war to force 11 states and 9 million Southerners into submission. After the North emancipated 4 million slaves, they still had no clear path to equality. Lincoln, the most visionary leader of the era, died before he could even try to fully reunite the country. Finally, Americans in the North and the South remained settled in their conviction that blacks and whites weren’t equal. 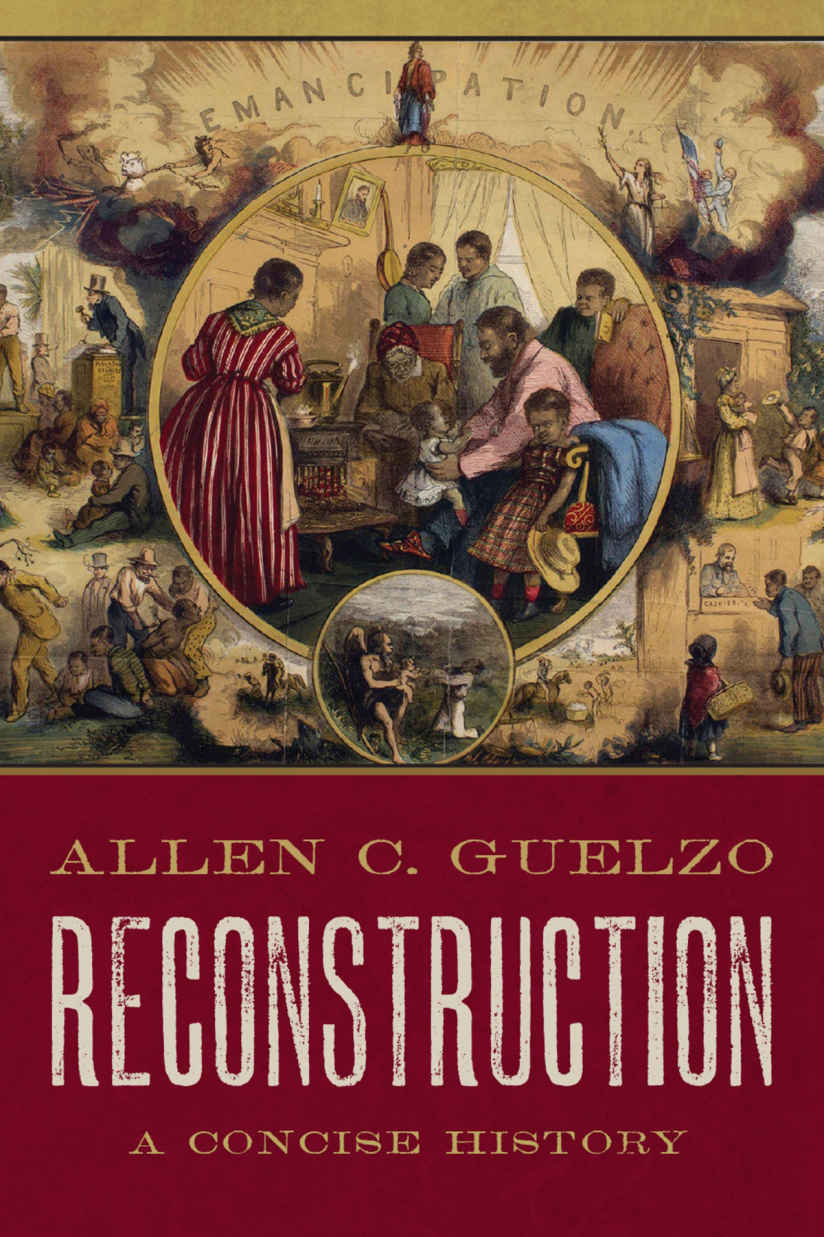 The era known as Reconstruction is one of the unhappiest times in American history. It succeeded in reuniting the nation politically after the Civil War but in little else.

In this concise history, award-winning historian Allen C. Guelzo delves into the constitutional, political, and social issues behind Reconstruction to provide a lucid and original account of a historical moment that left an indelible mark on the American social fabric.

A nation that eradicated the blight of slavery allowed nearly a century to pass before African Americans enjoyed the most basic of civil rights.

Lincoln’s successor, Andrew Johnson, proved to be an enemy of Reconstruction. He worked against a Congress that, under the influence of the so-called “radical” Republicans, sought to suppress Confederate influence in the South. Senator Charles Sumner and Representative Thaddeus Stevens worked diligently to pass Reconstruction bills. However, the states worked just as hard to legislate “black codes” banning black-white marriage, free speech, and even owning firearms and knives (26). Congress fought back, often overriding a president who worked to keep the peace at the expense of civil rights.

By 1868, a window of hope cracked open. The House impeached President Johnson (55). Washington readmitted several states into the Union and demanded pro-Reconstruction leadership—much of it consisting of African American legislators (57). Optimism bloomed.

Under the surface, unfortunately, forces conspired to derail Reconstruction’s progress. Republican leaders may have done too much too soon (60). They enacted laws that went beyond the people’s willingness to follow. Bands of former slaveholders terrorized blacks (62). The Ku Klux Klan started in 1866 and “quickly became, by 1867, a night-riding posse, complete with graveyard costumes, bizarre ranks and titles, and a mission . . . to ‘overawe union men, both black and white’ and ‘put the negro in a semi-serf condition’” (64). The reality was worse than the threat. Between 1885 and 1900, “201 lynchings took place in Alabama, 219 in Georgia, 253 in Mississippi, and 247 in Texas” (124).

The Republican leadership at the state level was simply too green to lead a population unwilling to change its attitude. Guelzo notes, “It was, in the end, inexperience which proved a deadlier poison in Reconstruction’s cup than murderous white violence” (66). Neither the federal nor state Republicans had a political answer to the ongoing, subversive actions of the white South.

Reconstruction is no success story.

The South wasn’t the only problem, however. Democrats on both sides of the Mason-Dixon line pushed back against black civil rights. Shortly after the war ended, Connecticut, Wisconsin, and Minnesota voted down measures to provide equal voting rights (30). Northern Democrats “bitterly opposed the Fifteenth Amendment” and “employed Klan-like intimidation to suppress black votes in Northern cities” (101).

By 1878, Democrats had regained control of the House and the Senate, and Southern governorships were firmly in their hands. Regardless of the Fifteenth Amendment, which said states couldn’t discriminate on the basis of race or color, Southern leaders imposed “literacy tests, poll taxes (starting with Georgia in 1871), property requirements, and sheer intimidation” on black voters (117).

Reconstruction wasn’t a complete failure, Guelzo notes. The Union was restored, and the Fourteenth and Fifteenth Amendments recognized the rights of citizenship for former slaves. Moreover, our Civil War didn’t end in “mass executions” (12, 127). But for all this good, Reconstruction is no success story. Unjust laws on paper, and racism in human hearts, continued to flourish. Guelzo quite appropriately cites T. S. Eliot: “I question whether any serious civil war ever does end” (127).

Unfortunately, Guelzo fails to even mention the role of Christians in Reconstruction—certainly a concession to keep his book concise. But this omission is costly, since churches played an important role in both preserving racist attitudes and, ironically, providing a preacher to lead the South out of Jim Crow.

Guelzo successfully explores the lines of political division that persisted after the Civil War. Had he addressed church life, he would have found parallel lines among Christian leaders, denominations, and churches.

We can better understand today’s racial divisions when we remember the Civil War didn’t come close to ending political or religious strife.

Southern white Protestants heartily defended the Southern way of life during Reconstruction, and they cheered the return of Democrats to power in the 1870s. Most agreed slaveholders called down God’s discipline by treating their slaves poorly, but few admitted slavery itself was sinful. Churches in the North considered the war-torn South their mission field; they tried to reunite fractured denominations, with little success. Freed blacks saw Reconstruction as an opportunity to finally have a church of their own, outside the control of white masters. Their departure from white churches was accelerated by racism that remained rampant (for more information on the church during Reconstruction, see Rebuilding Zion, Redeeming the South, and Baptized in Blood).

Long story short: we can better understand today’s racial divisions when we remember that the Civil War didn’t come close to ending political or religious strife. In the years after the war, America remained a nation where racism won the day in congresses, courtrooms, and Sunday school classrooms around the country.

American Christians who read Reconstruction (and it’s certainly worth reading) will lament our history. A people capable of welcoming the “huddled masses” to Ellis Island proved just as capable of suppressing the rights of freed blacks in Atlanta. Reconstruction isn’t just a window into 19th-century history; it’s a window into the human heart. Readers who wonder if Eliot was right when he suggested civil wars don’t ever end will naturally pray with John, “Come, Lord Jesus!” (Rev. 22:20).