In Stephen R. Holmes’s The Quest for the Trinity: The Doctrine of God in Scripture, History and Modernity, we have a book that is sweet to the taste but bitter to the stomach. Though Holmes’s learned little scroll reflects deep familiarity with the history of trinitarian thought and expresses its argument with clarity and verve, it ultimately delivers “a catastrophic story of loss” (xviii). The book’s central thesis is that the flurry of studies devoted to the doctrine of the Trinity over the last several decades doesn’t signal a recovery of the doctrine confessed by the pro-Nicene fathers, the medieval doctors, and the Protestant Reformers, but instead amounts to a “thoroughgoing” (xvi) departure from the church’s orthodox tradition.

The Quest for the Trinity is an exemplary work of historical theology. In the space of 200 pages, Holmes, senior lecturer in systematic theology at the University of St. Andrews in Scotland, surveys the history of trinitarian doctrine, carefully interacting with primary sources (past and present) and cognizant of the best historical scholarship on the Trinity produced in recent years. Eschewing the now widely refuted historiography of early Christian theology’s corruption by Greek metaphysics (the “Hellenization thesis”) and of a perennial breach between Eastern and Western models of the Trinity (the “de Régnon thesis”), Holmes demonstrates the broad consensus on central elements of Trinitarian orthodoxy (helpfully summarized on pp. 146, 199-200) that held sway in the church’s doctrinal imagination until the end of the 18th century. Of special significance to evangelical readers, Holmes is attentive throughout to the exegetical provenance of doctrinal concepts that would come to control the church’s faithful reasoning about God.

The Mediating Theology of the 19th Century

In Holmes’s telling of the story, the declension in trinitarian theology we’ve inherited isn’t primarily traceable to the anti-Trinitarians of the 18th century, whose biblicism and rationalism spawned perhaps the greatest opposition to the received doctrine since the fourth-century settlement. Nor is it traceable to the tradition’s alleged emphasis on a naturally revealed divine unity at the expense of a supernaturally revealed divine triunity. For Holmes, the declension is primarily traceable to the “mediating theology” of the 19th century that tried to rehabilitate the essence of the Christian faith under the conditions of the modern age. Whether in Friedrich Schleiermacher’s rather underdeveloped discussion of the Trinity or in Isaak Dorner’s more sophisticated version of the doctrine, the goal of 19th-century mediating theology was to restate the vital core of Christian faith and practice in a manner amenable to modern consciousness—particularly its affinity for personalist philosophies and antipathy toward classical metaphysics—and answerable to the radical criticism to which traditional forms of Christianity had been subjected by Enlightenment thinkers. When it came to the Trinity, such restatement called for what Schleiermacher described as “a transformation” that would “go back to its very beginnings” (188). For mediating theologians, the path to trinitarian renewal required bypassing rather than retrieving the classical trinitarian consensus.

The 19th-century attempt to renew trinitarian theology apart from retrieving the classical consensus provides the necessary backdrop to appreciating the recent resurgence of interest in the doctrine. According to Holmes, the contemporary revival of trinitarian thought—for all its divergence from the material claims of a Schleiermacher or a Dorner—hasn’t diverged from the programmatic path of renewal without retrieval charted by 19th-century theology. It hasn’t “returned to careful readings of the Fathers and the classical tradition” as a fecund resource for constructive theology, and it’s often regarded the classical consensus more as a “problem” than as a “potential solution” to contemporary challenges to trinitarian faith (199). The ironic result of this situation is a trinitarian theology that, in many cases, traverses the paths exactly opposite of those charted by the pro-Nicene fathers: seeking to develop a doctrine of the Trinity from the New Testament alone rather than from the canon as a whole, seeking absolute metaphysical clarity rather than accepting the epistemological limitations that must accompany theological reflection in its pilgrim state, and seeking to construct a model of the three divine persons on the basis of modern theories of human subjectivity and personhood rather than contemplating God’s tripersonal life in light of its incomparable singularity and simplicity.

Not a Happy Tale 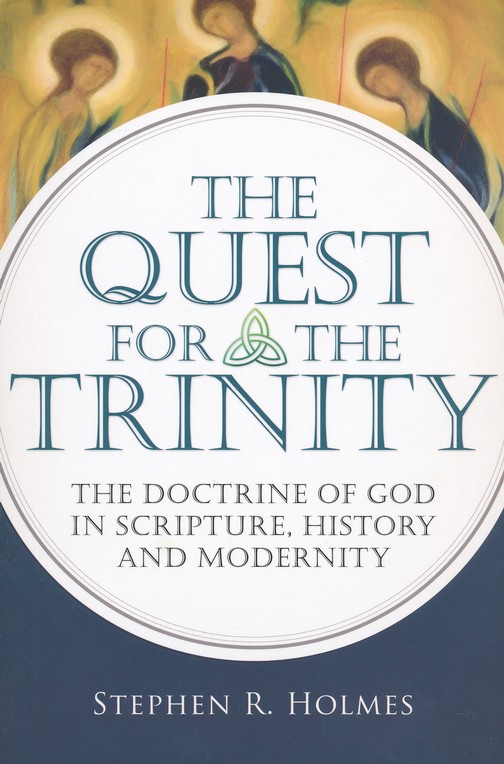 The Quest for the Trinity: The Doctrine of God in Scripture, History and Modernity

The Quest for the Trinity: The Doctrine of God in Scripture, History and Modernity

The doctrine of the Trinity was settled in the fourth century, and maintained, with only very minor disagreement or development, by all strands of the church—Western and Eastern, Protestant and Catholic—until the modern period. In the twentieth century, there arose a sense that the doctrine had been neglected and stood in need of recovery. In The Quest for the Trinity, Holmes takes us on a remarkable journey through 2,000 years of the Christian doctrine of God.

Of course, The Quest for the Trinity offers a historical thesis, not a dogmatic one. And so, as Holmes readily admits, contemporary trinitarian theology (including much contemporary evangelical trinitarian theology) could be more or less right in its judgments about the Trinity and the classical consensus could be more or less wrong. However, given the Lord’s promise of John 17:26 (“I made known your name, and I will continue to make it known”), a historical thesis like Holmes’s can never be without some dogmatic import.2 Can the creedal and confessional tradition of catholic and evangelical thought from the fourth through the 17th centuries really be wrong about the identity of the God we worship? And can 19th-century mediating theology, with its revisionist hermeneutics and metaphysics and exaggerated confidence in human reason, really be right? These aren’t questions The Quest for the Trinity seeks to answer. But they are questions Holmes’s “catastrophic story of loss” requires us to address. To the extent we’re willing to do so, Holmes’s hard pill to swallow might catalyze the cure of our doctrinal ills.

2 For a helpful account of the role tradition should play in constructive theology, see Holmes’s Listening to the Past: The Place of Tradition in Theology (Grand Rapids, MI: Baker Academic, 2002).

Scott R. Swain is president and James Woodrow Hassell professor of systematic theology at Reformed Theological Seminary in Orlando, Florida. He has written or edited several books, including The God of the Gospel: Robert Jenson’s Trinitarian Theology, Retrieving Eternal Generation, and The Trinity: An Introduction (forthcoming).