In some churches, it is a word that conjures up images of an angry and capricious God who acts arbitrarily to save some, but consigns most sinners, including deceased babies, to eternal perdition. In some churches, it is the mother-of-all-swear-words. Let the pastor dare to breathe it in the presence of the deacon board and he risks firing or fisticuffs or worse. It is anti-American, anti democracy, anti-right-to-choose. It bespeaks a long-faced religion, the mere invention of a maniacal 16th-century minister whose progeny manufactured a theological “ism” that has plunged countless souls into a godless eternity. In other churches, it is a cherished word that describes a beloved doctrine, one that bestows comfort and unshakable confidence that not one maverick molecule, not one rebel gnat exists outside of God’s loving providential control. Predestination.

Few doctrines have assembled such a pugilistic resume in the history of American religion. In a lively and winsome new book, Predestination: The American Career of a Contentious Doctrine, Peter J. Thuesen provides a lively and illuminating account of this most controversial of all Christian doctrines. Essentially, the author argues that predestination has served as the fault line that has produced fractures among Christians in America throughout her religious history.

In the span of 228 pages, Thuesen details all the above approaches to predestination and shows how differing branches within American evangelical Christianity have both splintered and unified around what John Wesley once called “that horrible decree.”

Thuesen, who serves as professor and chair of the Department of Religious Studies at Indiana University-Purdue University Indianapolis, opens with the historical development of the doctrine, tracing the predestination trail from the apostle Paul through Augustine and Thomas Aquinas through Calvin and his progeny, the English Puritans. Along the way, he shows points at which church leaders and reformers, such as Luther and Calvin, disagreed stringently over the doctrine.

As the subtitle suggests, the author spends the bulk of the book in America, the democratic public, a nation which, he shows, has always looked askance at any doctrine that threatens to minimize or undermine libertarian freedom. Thuesen begins his examination of predestination in America as it took root in the fertile Calvinistic soil of New England Puritanism up through Jonathan Edwards. Here, he shows how the doctrine’s nuances were anything but unilateral, as is seen in a dust-up over supralapsarianism vs. infralapsarianism in 17th century Massachusetts Bay between John Cotton and William Twisse. 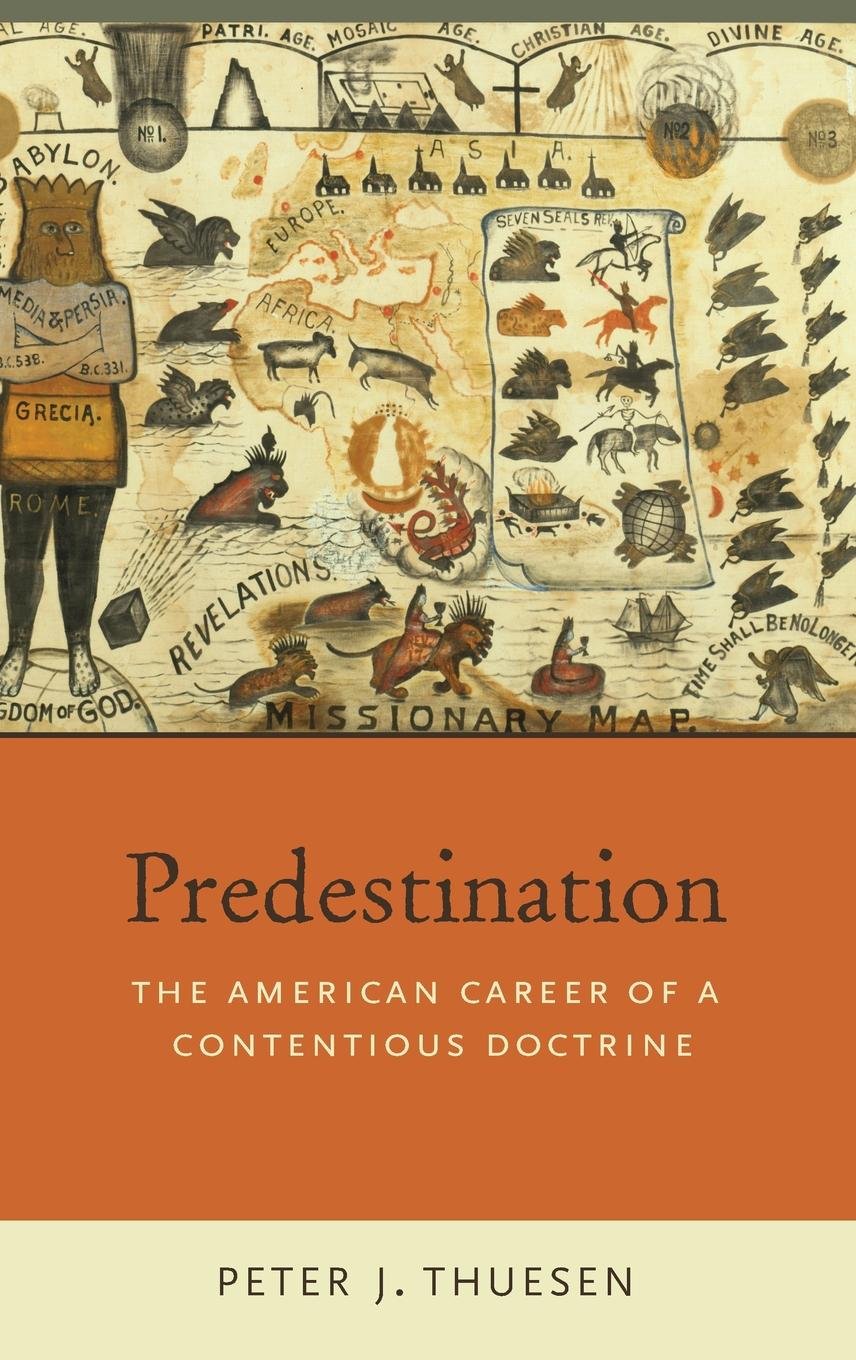 This groundbreaking history, the first of its kind, shows that far from being only about the age-old riddle of divine sovereignty versus human free will, the debate over predestination is inseparable from other central Christian beliefs and practices—the efficacy of the sacraments, the existence of purgatory and hell, the extent of God’s providential involvement in human affairs–and has fueled theological conflicts across denominations for centuries.

From there, Thuesen shows how Enlightenment thinking crashed on American shores, replacing special revelation with human reason as the measure of truth. This development, he shows, undermined the Puritan doctrine in the popular mind as seen in controversies among Anglicans and Lutherans. Predestination lost momentum among American Christians, Thuesen further argues, in the 19th century with the proliferation of Wesleyan theology through revivalism and in Christian splinter groups such as the Latter-Day Saints.

The book concludes with an account of controversies that have split Presbyterians and Baptists as both predestinarians and non-predestinarians have co-existed not-so-peacefully within the denominations. Thuesen shows how Presbyterians divided into Old and New Lights camps over issues of God’s sovereignty and human freedom during the two Great Awakenings, with the division ultimately leading to the formation of two different Presbyterian churches along with the revivalistic Cumberland Presbyterians.

Among Southern Baptists, Thuesen traces out the conflict which still exists today and is particularly regnant in the growing embrace of the so-called “New Calvinism” among younger pastors and leaders in the SBC. The controversy here, as Thuesen points out, exists largely along generational lines with old-guard conservative SBC leaders clinging to power while demonizing the Reformed theology of younger leaders as a danger for local churches to avoid.

Throughout the book, Thuesen tracks sacramentalism alongside predestination and argues that where doctrine is emphasized as an impetus to Christian piety, the other has tended to go into hibernation. Although this is a minor note overall, the author traces out an intriguing case since predestination tends to emphasize the “otherness” or transcendence of God and sacramentalism tends to focus on the “nearness” or immanence of God. While this is not as compelling as his overall thesis and there is not a clear tie between sacramentalism and predestination, Thuesen’s argument is suggestive and thought-provoking.

Overall, Thuesen makes a strong case for his overall thesis and provides an excellent, well-written and well-researched overview of the history of this important but contentious doctrine in the American church. His account is even-handed and enlightens the reader to both the strengths, the weaknesses and the often humorous excesses of the chief competitors and central arguments in the debate.

Reading a scholarly volume on predestination might typically elicit a mere yawn from even the most voracious bibliophile, but Thuesen’s narrative lives and breathes in a fashion that is congruent with the vigor and heat that the controversy over predestination has produced. Thuesen exhibits a clear and accurate understanding of the doctrine of predestination as well as the corollary issues and includes a helpful glossary of theological terms to guide the reader in distinguishing between, for example, supralapsarian and infralapsarian views.

Pastors, students and thoughtful laypersons of every theological persuasion should read this work to avoid the popular caricatures that often come with discussions of this doctrine, one that is vital because it is found in the pages of Scripture. Thuesen’s excellent work has provided evangelicals with an opportunity to live in closer fidelity to the ninth commandment.