Whenever N. T. Wright releases a new book, you can be prepared for four things. (1) There will be some superb popularizing: complex theological and historical issues expressed with enviable clarity in light, sparkly, readable prose. (2) There will be some quirks—some themes that Wright thinks are central and obvious that many other scholars do not—and you have to decide whether you agree with him. (3) A few dead horses will be flogged; and depending on the subject matter, the dead horses may be ridden by straw men. (4) And there will be moments of sheer brilliance that make you think about things in completely new ways, and ensure that you will both recommend this book and also determine to read his next one.

(I’ve probably read 30 books of his now, and something like this has happened virtually every time.)

His latest, Paul: A Biography, is no exception. In some ways it’s an unusual book for Wright: a biography rather than a theological or exegetical study, and it’s stylistically located halfway between the heavyweight academic texts in his Christian Origins series and his popular For Everyone commentaries. Yet the popularizing, the quirks, the dead horses, and (most strikingly) the brilliance are all there, with the good comfortably outweighing the bad. Among the handful of Paul biographies I have read—F. F. Bruce, Jerome Murphy-O’Connor, and John Barclay’s much shorter recent introduction—this is the one I will be recommending from now on.

Wright has a clear gift for popularizing complex ideas. Ancient history, Greco-Roman philosophy and politics, Jewish theology, Mediterranean geography, New Testament studies, and biblical chronology: all are summarized and illustrated in ways that make them clear to the non-specialist, without dumbing down to the point of distorting them. 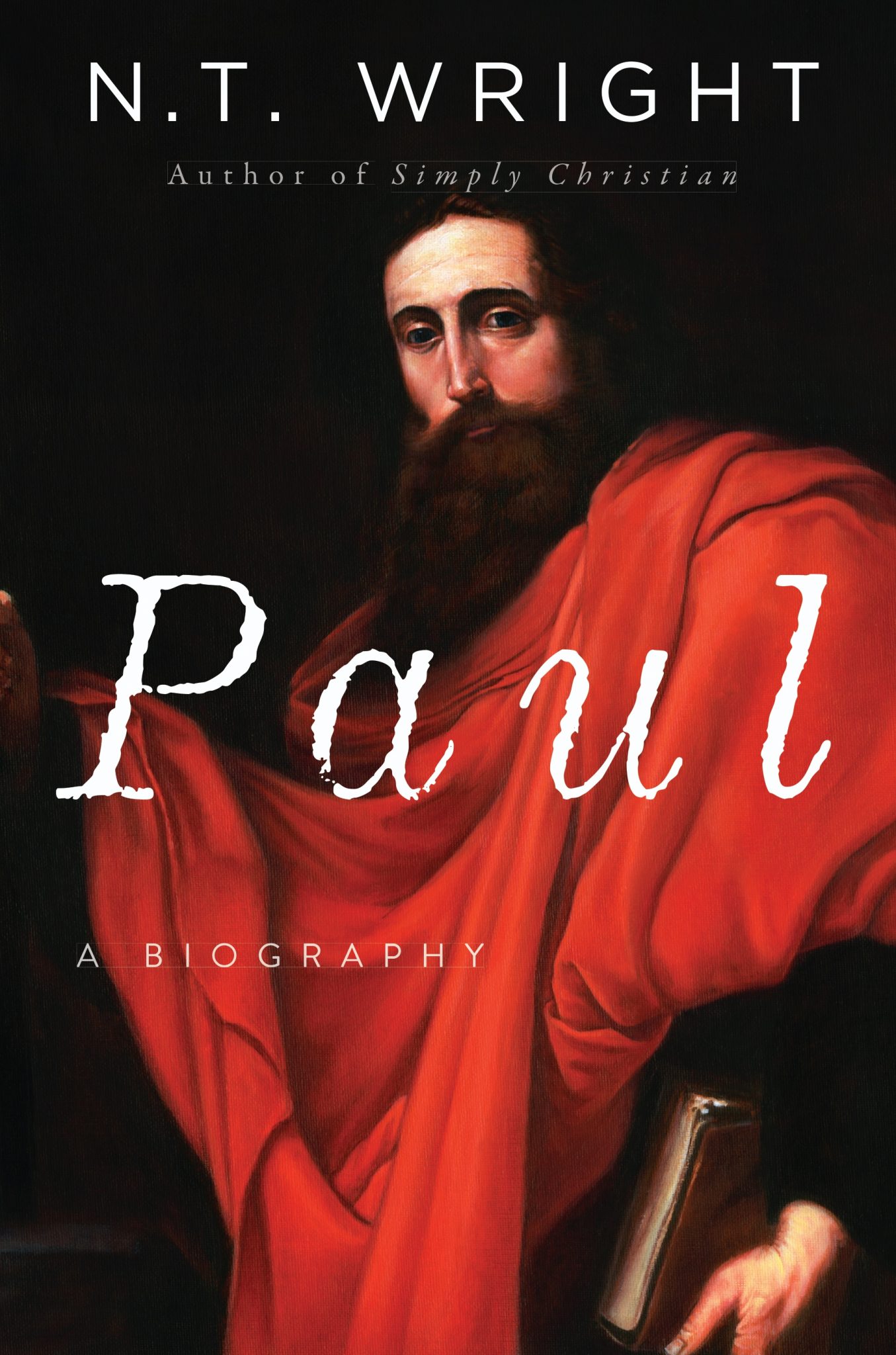 In this definitive biography of the apostle Paul, N. T. Wright—the renowned Bible scholar, Anglican bishop, and bestselling author—fills in the human and intellectual drama behind the story of the best-known figure in the early Christian movement.

“Paul is central to any understanding of earliest Christianity,” Wright says. He contends that our knowledge of Paul and appreciation for his legacy cannot be complete without an understanding of his Jewish heritage, and provides a detailed examination of the relationships, travels, teachings, and beliefs that that made him the extraordinary man he was.

As he describes events in the first century, you feel like you are there, watching, listening, and at times (in the leather shop, for instance) even smelling the environment. You also see things that should be obvious but somehow aren’t: the fact that being in prison was not a sentence but a place of waiting for a decision about your fate, or the probability that Paul could only demonstrate his Roman citizenship by carrying the small wooden badge, the diploma, that confirmed it.

There are quirks, too. Some of them will be familiar to those who have read Wright before, like the centrality of exile and “return to Zion” motifs in second temple Judaism, or his (contentious to the point of being obstinate) decision to translate dikaiosunē as “covenant membership” in Romans 10:4. Some involve the development of ideas in his previous work, such as the way he stresses the zeal of Phinehas as a crucial category for locating Paul’s self-understanding. A new-to-me quirk in this book is the idea that Paul’s Damascus Road experience grew out of his extended meditation on the vision of Ezekiel 1:

In his mind’s eye, then, he has the four-faced creatures and the wheels. He focuses on them. He sees them. He ponders them. Will he dare to go further? . . . Upward again, from the chest to the face. He raises his eyes to see the one he has worshipped and served all his life. And he comes face to face with Jesus of Nazareth.

You may find paragraphs like this intriguing, or exasperating, or even both, and the same could be said of many of the quirks I have mentioned. You cannot, however, call them boring.

Then there are the dead horses, which (again) regular readers will immediately recognize, whether they do so with a fist pump or an eye-roll. Christianity isn’t just about going to heaven when you die. The Bible is not a timeless theological system. There’s more to the gospel than personal salvation. The divide between “religion” and “politics” is not an ancient one. Paul didn’t expect the church to be raptured away to heaven, followed by the imminent collapse of the space-time universe. Being a Christian isn’t just about how you feel or what you believe, but what you do.

In principle there is nothing wrong with making any of these points, not least because he’s flogging horses that in some sections of Christendom are very much alive (though probably not in those sections that will read this book). At times, however, it’s easy to feel like you have read certain sections before, perhaps many times, and that Wright’s primary audience is himself, 50 years ago—which, as he implies in the introduction, is not far from the truth (5–8).

Yet this is more than offset by the flashes of brilliance that light up the text, time and time again. Listen to how Paul sounds like a Stoic here, a Cynic there, a Platonist in this text, a Zealot in that one. Look at the connections between Elijah and Paul, as they flee from danger in Israel to Arabia/Horeb and then go back to Damascus, and how that makes sense of Paul’s “silent years” we read about in Galatians 1.

Notice the way the Moab story in Numbers 22–25 illuminates idolatry (the quest for power, the promise of money, the lure of sex), and what zeal for Israel’s God looks like in that context (Phinehas’s response)—and how, we could add, Saul’s “conversion” flips him from thinking he is Phinehas, bravely confronting Israelite corruption, to thinking he is Balaam, vainly opposing those whom God has blessed.

See what happens if you read Paul’s Areopagus speech (Acts 17) in parallel with the trial of Socrates—who was eventually sentenced to death for introducing foreign divinities, as Paul was accused of doing—and remember that Paul is in the highest court in Athens, not a philosophical debating society. And so on.

Most insightful of all, at least for me: Consider the explanatory power of an imprisonment in Ephesus, not mentioned by Luke, after the riot of Acts 19, during which Paul was on trial for his life. Let’s say that this is the Asian incident he reflects on at the start of 2 Corinthians, in which he hit emotional and spiritual rock bottom and came face to face with the powers of darkness, and that it is also the imprisonment during which he wrote Philemon, Colossians, Philippians, and Ephesians.

Might that shed light not just on little things (his joy at the gift of the Philippians, the time when Priscilla and Aquila risked their lives for him), but also big things (the hymns in these letters about the lordship and victory of Christ, and his overthrow of the cosmic powers)? Might it help us make sense of Paul’s emotional and theological development in the mid-50s, not just his timeline?

Perhaps the most winsome feature of the book is the way Wright paints Paul as a person: a real individual with ups and downs, agendas and complexities, hopes and fears, a passion for mission and a passion for prayer.

Wright’s Paul isn’t a theologian in an ivory tower, or an evangelist on steroids, or even the greatest letter-writer who ever lived; he’s a three-dimensional, many-sided, complicated human being, who feels crushed at times, yet remains the kind of person who “will say ‘Boo’ to every goose within earshot and to all the swans as well.”

So there is something quite fitting about the humanity and realism with which Wright speculates on the manner of Paul’s death, in his final paragraphs:

In my mind’s eye I see Paul, perhaps also surrounded by friends, awaiting the executioner. He too will be praying, and it might well be the prayer of loyalty and love, of Jewish-style loyalty, of Messiah-shaped loyalty, the monotheism of the inaugurated kingdom: “For us there is One God (the father, from whom are all things, and we to him), and One Lord (Jesus the Messiah, through whom are all things and we through him), and you shall love him . . . .” His life’s work has been to bear witness, openly and unhindered, to the kingdom of God and the lordship of Jesus, and that is what he now does in prayer as the executioner draws his sword. Loving this One God with his heart, his soul, and his might. And, finally, with his life.

Paul: A Biography is a bright, provocative, imaginative, and often brilliant book.