Taking the advice of C. S. Lewis, we want to help our readers “keep the clean sea breeze of the centuries blowing through our minds,” which, as he argued, “can be done only by reading old books.” Continuing our Rediscovering Forgotten Classics series we want to survey some forgotten Christian classics that remain relevant and serve the church today

My favorite metaphor for life has always been that of the road. Indeed, the problem with the phrase “Life is like a road” is that the word “like” has no business in the phrase. Life is a road, and we are pilgrims on it. We are Odysseus and Aeneas and Dante and Don Quixote and Huck Finn and Bilbo Baggins and that motley crew that joins Chaucer on the long road to Canterbury.

By the time I discovered Pilgrim’s Progress, I’d already been convinced of my status as a pilgrim, as a sojourner on this earth. What John Bunyan (1628–1688) taught me was that the journey isn’t only external; it’s also, perhaps primarily, internal.

Geographically, life’s road has led me from New Jersey to upstate New York to Ann Arbor, Michigan, to Houston, Texas. Personally, it has led me from childhood to college to graduate school to marriage to academia to fatherhood.

But much of my journeying has been done along that hidden road whose pavement can’t be seen by human eyes and whose byways cut across intellectual, emotional, and spiritual landscapes.

Bunyan gave me a method and a language—that of allegory—for tracing the internal journey and, by so doing, enabled me both to see the road and to assess my progress along it.

Bunyan didn’t invent allegory, and there are certainly many places in Pilgrim’s Progress that bog down or get wordy and arcane; but he did succeed in tapping something very deep in the human psyche. That’s why his book, though it seemingly should be of interest only to English Puritans, has exerted a universal appeal.

Of course, I understood the concept of urgency—in terms of my faith, relationships, and career—but the opening scene of Pilgrim’s Progress made that urgency real and visceral.

When Bunyan’s Everyman, Christian, learns he’s living in the City of Destruction and his only recourse is to flee the coming wrath, he doesn’t take a nap or discuss the matter dispassionately with friends or consult a psychiatrist or take prescription drugs. He runs. He sticks his fingers in his ears to drown out the cries of his wife and kids while he shouts at the top of his lungs, “Life! Life! Eternal Life!”

That image has been burned into my mind. It does what a hundred sermons couldn’t do. It captures physically and externally the internal spiritual struggle we face when called to do something countercultural. We must block our ears from the protestations of the world, from all that’s comfortable and familiar and safe. We must look ahead, stay focused, and press on.

Many of literature’s great heroes have inspired me to courage: Achilles, Odysseus, Aeneas, Beowulf, Arthur, Henry V. But here was a different kind of courage, and in a man who wasn’t otherwise remarkable. Christian is neither strong, nor highly educated, nor supremely virtuous. But he heeds the call, and refuses to play the part of Lot’s wife. Once set on his course, he doesn’t look back, despite the “logical” arguments posed by those trying to break his resolve.

The road Christian travels on his way to the Celestial City is a perilous one, and from it I learned I must be vigilant. 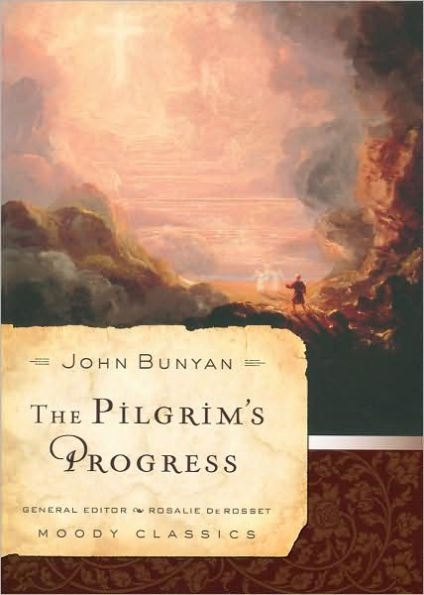 Chief among the perils he encounters is Vanity Fair, the great bazaar where everything is for sale—from silver and gold to houses and lands to titles and kingdoms to husbands and wives. Bunyan lived at the dawn of international capitalism, and he was one of the first to see its most pernicious spiritual danger: not, as the Medievals would’ve argued—that it was fueled by usury (lending money at interest)—but that it reduced everything to a price tag. Subsequently, happiness would not be a virtue one needed to cultivate within; it would simply be another consumer good for sale to the highest bidder in the marketplace of the world.

Christian survives his run-in with Vanity Fair, but his traveling companion, Faithful, dies a martyr’s death. The jurors who condemn him are aptly named: Mr. Blindman, Mr. No-good, Mr. Malice, Mr. Love-lust, Mr. Live-loose, Mr. Heady, Mr. High-mind, Mr. Enmity, Mr. Liar, Mr. Cruelty, Mr. Hate-light, and Mr. Implacable. There’s a powerful lesson in this that has stayed with me. Though Faithful doesn’t pose an active threat to Vanity Fair, his very presence within the Fair condemns it. He spoils the game, not by leading a revolutionary army, but by exposing its folly and falseness.

Still, though the episode at Vanity Fair helped open my eyes to the smiling, sophisticated, self-righteous enemies of the world, Bunyan’s allegory more often alerted me to the temptations that issue from within the soul. And of these, the most deadly is despair.

As God is the God of pilgrims, he mercifully sends Christian a new companion (Hopeful) to fill the void left by the loss of Faithful. At first all goes well, with Christian boldly and prudently exposing worldly opportunism and those who accommodate it. But then, in search of a gentler road, they abandon the straight path to take the easier By-Path-Meadow. Christian soon realizes his error and apologizes to Hopeful for leading him astray, but there’s a price to be paid. Unable to regain the straight road, they’re forced to sleep on the Meadow and, while asleep, are captured by Giant Despair and locked up in the dungeon of Doubting-Castle. There they endure daily beatings from Giant Despair, who counsels them to kill themselves and so end their pain and misery.

That’s what it was like, despair: being locked in a pit and ravaged with the blows of guilt and sloth and despondency. In some ways, it’s like the ennui and world-weariness that afflicts moody Hamlet, but here the temptation is spiritual. Christian comes close to giving up on the promises of Scripture and, as such, on the character of the God who gave them.

Thankfully, his companion’s name reflects his special gifts. Again and again, Hopeful urges Christian to take heart and play the man. He calls up for his despairing friend the memory of his earlier victories against sin and persecution and counsels patience, faith, and endurance. In the end, after a night of passionate prayer, Christian makes a discovery that causes him to cry out in amazement. All along he’s held in his bosom a key called Promise that can open every lock in Doubting-Castle. Once he realizes this, he removes the key and, one by one, the Castle doors fly open to facilitate their escape.

Rest Along the Way

Bunyan prepared me well for the subtle stings and snares, the treacherous traps and temptations, that lure pilgrims away from the Right Road; but he also taught me there are many places of refuge along the way. The Palace Beautiful, the River of God, the Delectable Mountains—all provide rest and refreshment for the weary pilgrim.

The Protestant Work Ethic—bequeathed to us out of the unlikely, if not ironic, marriage of English Puritans who founded our nation and Dutch businessmen who invented international capitalism—need not define and discipline our every waking moment. There’s room for leisure and fellowship, laughter and cheer, beauty and awe within this vale of tears.

We may be sojourners passing through a world not our home, but that shouldn’t prevent us from making merry in those temporary yet lovely inns that offer us rest for the night.