On a cold January night in 2003, I was in Denver, Colorado, for a Campus Crusade winter conference. All the cool kids wore Abercrombie and had flip phones, and under the influence of Joshua Harris’s book about relationships, I had kissed dating goodbye.

After dinner that night, I spoke with a girl named Brooke about dating—I mean courting—and whether God had marriage in our future. He did, and we’ve been married for a dozen years.

A lot has changed in the last 15 years. Crusade is now Cru. Having a flip phone might be cool, but in a retro kind of way. Yet for all the changes, much stays the same. Whether you call it dating or courting or something else, the “way of a man with a young woman” (as Proverbs puts it) is still a beautiful, mysterious thing, like a ship sailing across the sea (Prov. 30:18–19).

But like the high seas, dating can be dangerous, leaving people with bitter and broken hearts.

That’s why I’m thankful for Marshall Segal’s new book, Not Yet Married: The Pursuit of Joy in Singleness and Dating. Segal, staff writer and managing editor for desiringGod.org, is newly married, but he isn’t just another married guy telling singles what to do. “I wrote a lot of this book, and learned almost all of the lessons before I married my wife,” he explains, establishing his singleness credentials (16). 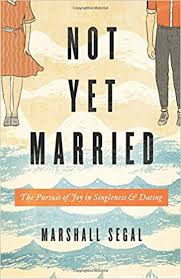 Not Yet Married: The Pursuit of Joy in Singleness and Dating

Not Yet Married: The Pursuit of Joy in Singleness and Dating

Not Yet Married has two parts. The first is “the not-yet-married life.” Here Segal channels many of Desiring God’s hallmark themes—passion and purpose, joy in mission, and the glory of God—and applies them to singleness. In the second part, “when the not-yet-married meet,” he deals with the particulars of Christian dating.

I imagine a few readers will find this layout frustrating, wishing Segal addressed the classic dating questions (How far is too far? Is he the one? What if I’m not attracted to her?) earlier in the book. But I think this structural choice is right. A proper understanding of singleness allows Christians to cultivate the character they need for healthy dating relationships and strong marriages.

As Rosaria Butterfield writes, “No Christian should start the search for a biblical spouse by looking outside for someone to come along. You must look inside first; you must turn over the pages of your heart with the Bible in hand.” Not Yet Married is a helpful guide for becoming a good prospective spouse before you begin searching for one.

It seems everyone celebrates vulnerability, but few authors write in a truly vulnerable way. For the last year I’ve been writing a book to help men battle pornography, and I’ve gotten feedback that I’m not “in” the book enough, meaning I haven’t been vulnerable enough. I bring this up because Segal is “in” his book, and I commend him for it.

Not Yet Married isn’t a memoir, but Segal tells us about his rougher breakups, loss of virginity before marriage, idolizing of marriage, and saying “I love you” before he did and to those he didn’t. The inclusion of these struggles, albeit with appropriate discretion, gives the book a flavor of reality rather than romanticism. His vulnerability helps us see that God’s grace is actually available to actual sinners.

Another strength of the book is Segal’s emphasis on having strong Christian community while single and dating. As a pastor, I often see the newly dating forsake their local church and friend groups. Yet because of the weight of these decisions, dating should be a season of seeking input, not isolation.

I also appreciated Segal’s reflections on work and vocation. He challenges the assumption that being single means you should log extra time at the office. “Yes, Paul said it is better not to be married,” Segal notes, “but I don’t think he had career advancement in mind” (77). He encourages singles to pursue ministry opportunities instead.

This book seems to be aimed at younger singles. Those who identify more with Bethany Jenkins’s popular article “Turning 40 While Single and Childless” (also vulnerable) can still find Not Yet Married helpful and encouraging, but they should know Segal occassionally assumes his readers are younger.

The church I co-pastor is filled with young people, and I officiate a lot of weddings. But for every person I married this year, there are a dozen who didn’t get married but want to someday. I often feel the limits of my pastoral abilities when I speak with singles about their desire for marriage, and I don’t know a better book to recommend than Not Yet Married.