In 1951, Fuller Theological Seminary was considering offering a faculty position in Christian education to Henrietta Mears. The Pasadena seminary had recently bowed to pressure and created a special degree program for women. Founded in 1947, Fuller could already boast of a number of evangelical stars, including Carl F. H. Henry, Harold Lindsell, E. J. Carnell, and Wilbur Smith. Even though they highly admired Mears, some expressed fear that her appointment might result in “the subjugation of the faculty to her own personality and persuasion.” Lindsell explained to Harold Ockenga, the seminary’s president: “I gather that they felt the maleness of our faculty would be protected far more” by another candidate, Rebecca Price. After Price turned them down, they did offer the position to Mears, even suggesting they would have to build a new building to deal with the student influx if she came. Mears declined, remaining in her position as director of education at the First Presbyterian Church of Hollywood.

That incident captures something of both the magnitude of Mears’s standing and the limits on the place of women in the American evangelical world of mid-century. Mears had developed an immense influence despite embracing women’s subordinate role. To call her “the mother of modern evangelicalism,” as Arlin Migliazzo does in Mother of Modern Evangelicalism: The Life and Legacy of Henrietta Mears, is not too much of a stretch.

Remaining in her position as a Sunday school teacher and head of the education program at a local church, she found ways to help shape an entire movement. Though she was never married, her “boys” included many of the principal architects of the “new evangelical” movement that grew out of earlier fundamentalism. 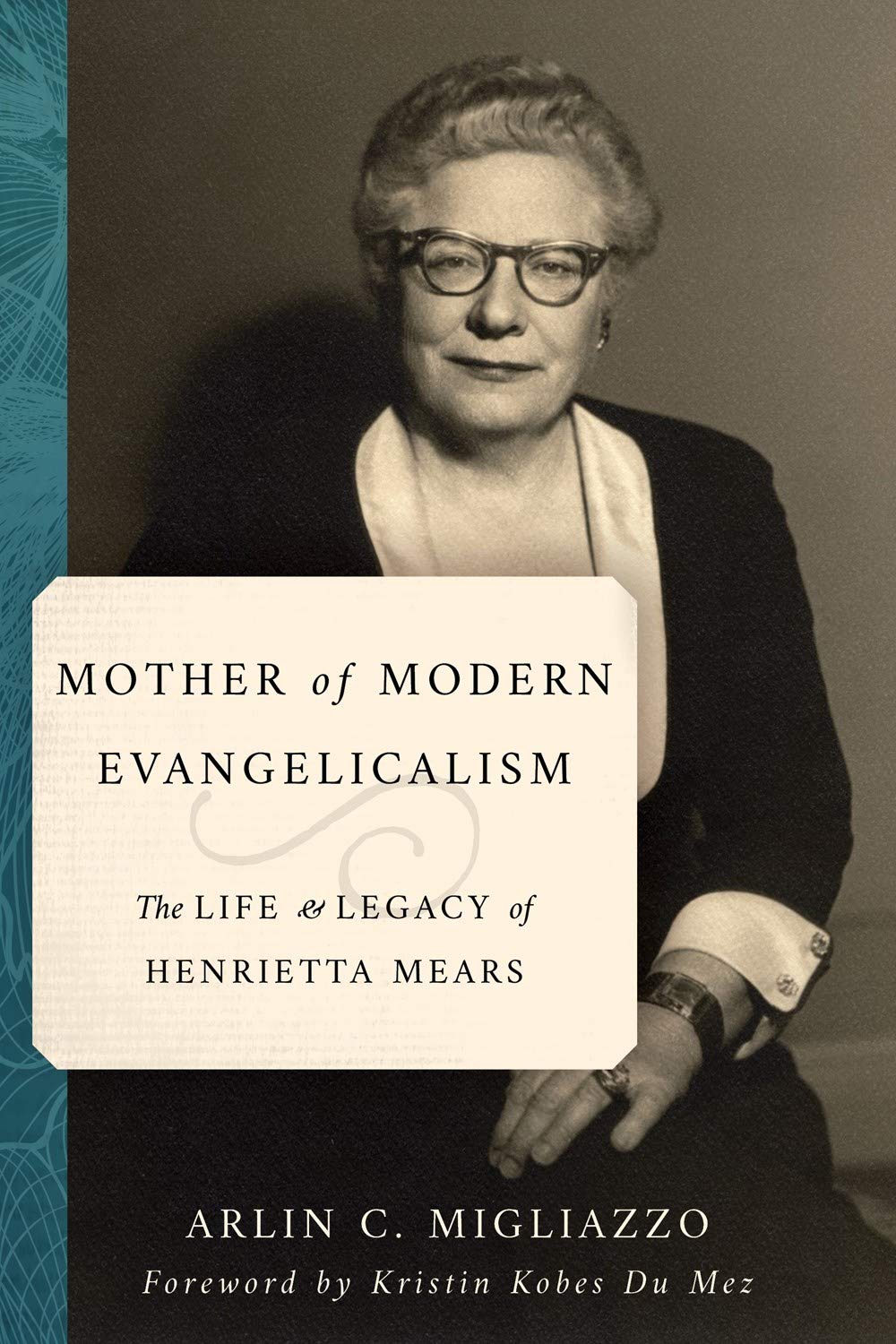 Mother of Modern Evangelicalism: The Life and Legacy of Henrietta Mears

Mother of Modern Evangelicalism: The Life and Legacy of Henrietta Mears

Although she was never as prominent as Billy Graham or many of the other iconic male evangelists of the twentieth century, Henrietta Mears was arguably the single most influential woman in the shaping of modern evangelicalism. Her seminal work What the Bible Is All About sold millions of copies, and key figures in the early modern evangelical movement like Bill Bright, Harold John Ockenga, and Jim Rayburn frequently cited her teachings as a formative part of their ministry. Graham himself stated that Mears was the most important female influence in his life other than his mother or wife.

The list of prominent leaders she influenced would make up a full page of a Who’s Who of Evangelicalism. Her strongest lasting influence was in shaping the ministry and message of Campus Crusade founder Bill Bright. In 1953 Mears began a decade-long residence with the Brights in her impressive home next to the UCLA campus. She also had a large influence on Jim Rayburn, founder of Young Life.

The most famous example of how she exponentially multiplied her influence is Billy Graham. Under her guidance, Graham had an epiphany that resolved his doubts so that he rededicated himself to biblicist evangelicalism just before his career-launching 1949 Los Angeles Crusade. That took place at Forest Home, a resort in the San Bernardino Mountains that Mears had procured in 1937 and turned into a legendary Christian conference center.

More than 400 of her “boys” went into full-time ministry and many others became prominent lay leaders. Her influence was arguably the principal factor in building a network of distinctly evangelical churches within the Presbyterian church in the United States on the West Coast. Not incidentally, she authored Sunday-school curricula used by thousands of churches and wrote a popular volume, What the Bible Is All About.

To call her ‘the mother of modern evangelicalism’ . . . is not too much of a stretch.

Clarence Roddy, who taught homiletics at Fuller, remarked that Mears was the greatest preacher in Southern California. Yet, despite hundreds of occasions when she eloquently expounded biblical teachings from behind a pulpit, she maintained that she was never preaching, but just teaching. In contrast to her contemporary Aimee Semple McPherson (both born in 1890), who preached every Sunday at her Angelus Temple five miles down the freeway, Mears adamantly embraced a subordinate role both for herself and for the women whom she taught. She would, for instance, not allow a woman to be the president of her college department, even when they were sometimes nominated (and when she herself was the executive head of the whole Christian Education program).

Migliazzo—professor emeritus of history at Whitworth University, where he taught from 1983 to 2018—points out these paradoxes, but wisely I think, does not moralize about them. Twenty-first century readers will reflect the spectrum of views regarding the roles of women in church leadership. So they can draw for themselves the lessons to be learned from Mears’s remarkable accomplishments from the position she embraced.

One sort of question to ask is: “How did she do it?” “What were the secrets to her success?” One part of the answer is that, despite having grown up in the church of militant fundamentalist William B. Riley, she avoided controversy. She chose to fit in with culturally influential institutions. For instance, she directed the great majority of her “boys” to study at Princeton Theological Seminary, rather than at a more explicitly evangelical school. She stayed away from political issues. She befriended and benefitted from the fame of Hollywood film stars, rather than condemning the industry.

Migliazzo helpfully characterizes her approach as “graceful engagement.” She was a keenly intelligent, no-nonsense, well-to-do lady who could forcefully, yet graciously, engage her audiences. Most importantly, she seems to have radiated grace in the evangelical sense. Among the basic influences in shaping her outlook were Keswick holiness teachings, which emphasized the entire surrender of the will to Christ. One of her favorite sayings was “If he is not Lord of all, he is not Lord at all.” With Christ as Lord, one would seek a life of service.

For Mears, as in much of evangelicalism, that service was first of all in evangelizing others. The motto of her college department was “to know Christ and to make him known.” Christian service did not end with evangelizing others, but her emphasis, as reflected in Campus Crusade for instance—was that is where it starts. Mears can be faulted for things she did not do. But, if we recognize that the body of Christ has many parts, she may be justly celebrated for using her gifts well to help enliven the whole.

One thing that remains a bit of a mystery is Mears’s personal life, even after Migliazzo’s thorough research and thoughtful reflections on a wide range of her activities. In California, Mears lived with her sister Margaret until Margaret died in 1951. Henrietta appears never to have had a romantic interest although she took an interest in matchmaking for her students. In that era, the unmarried woman dedicated to her teaching was a familiar figure—even among Protestants. Mears’s singleness together with her indomitable personality doubtless contributed to her success in her calling. She liked to live in some style and enjoyed overseas travel. But apparently there are no troves of personal writings or letters that tell us much about what she was thinking or wishing or wrestling with.

If we recognize that the body of Christ has many parts, she may be justly celebrated for using her gifts well to help enliven the whole.

It is hard to see how Migliazzo might have done more in presenting us with a portrait of such an effective leader from a very different time. The biography is worth reading in part because it provides an engaging account of a remarkable individual and also a window into an evangelical world of another era. Henrietta Mears is not someone whom could easily be imitated in the 21st century. Yet reflecting on what it was that brought her extraordinary success and influence might well provide helpful principles that might be applied in other circumstances.

George Marsden has taught history at Calvin College, Duke University Divinity School, and the University of Notre Dame, where he is now professor emeritus. He’s the author of Fundamentalism and American Culture and Jonathan Edwards: A Life, among others.