In The Missionary-Theologian: Sent into the World, Sanctified by the Word, E. D. Burns catalogs the anxieties facing cross-cultural missionaries, including culture, kids, church, and finances. “Who in the world would do that?” (34). Strength for such a calling has to come from deeper than our ever-changing feelings or from a simple desire to do good in the world.

The Missionary-Theologian is a call for missionaries who are theologically mature. As Burns describes it, both missionaries and churches are falling short on the proper qualifications for cross-cultural mission work. The evidence is anecdotal but still easy to spot among evangelicals. Any warm body and willing heart is ready for cross-cultural service.

Visions and words from God serve unduly in place of a well-rounded calling. Some missionaries run toward the causes that make great videos in place of the patient work of evangelism and discipleship. “Hindu surfers in Bali” need the gospel too, don’t they (62)? These lead to quick burnouts in overseas ministry and represent a short-sighted vision of God’s work in the world. 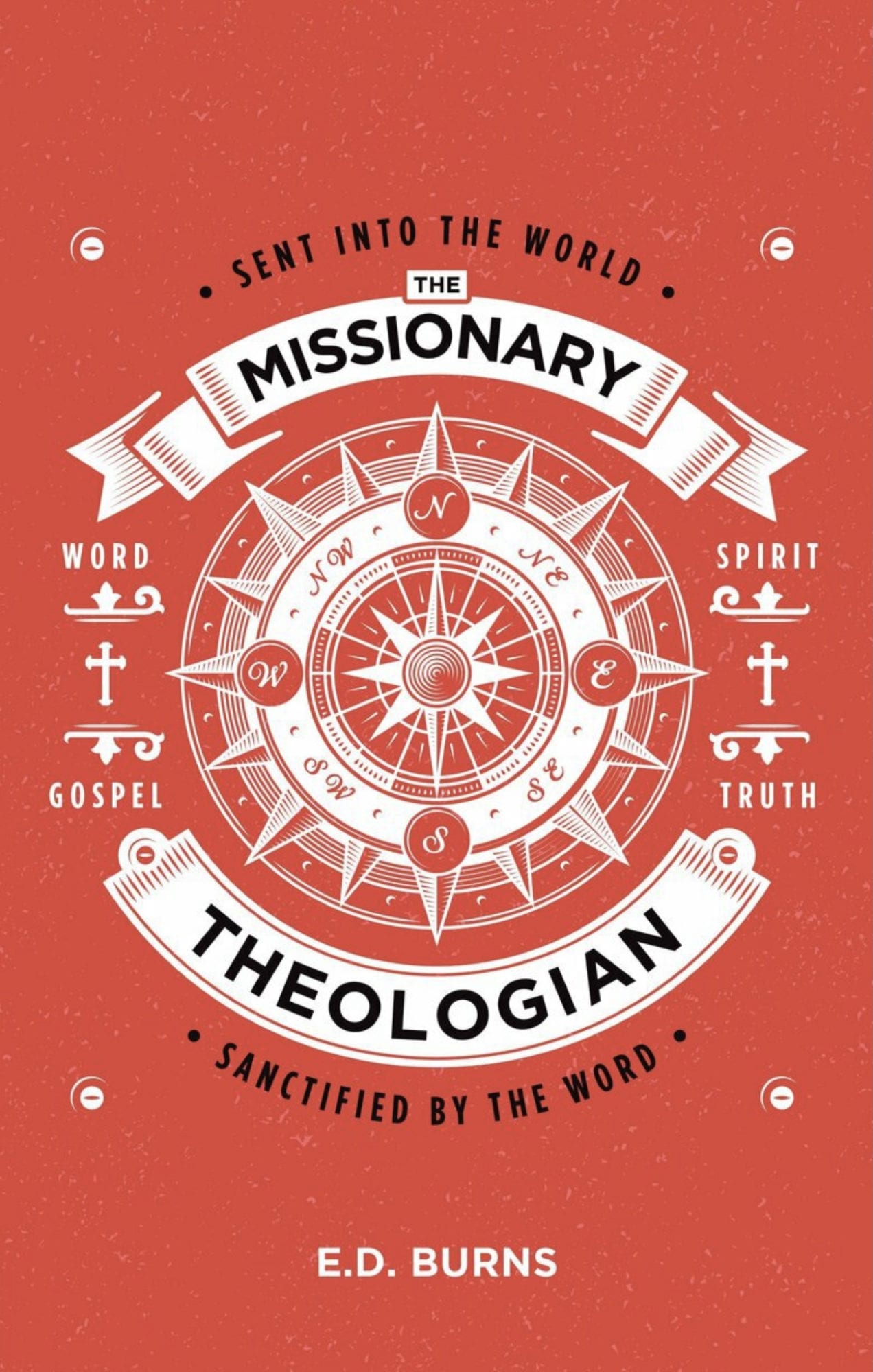 The Missionary-Theologian: Sent into the World, Sanctified by the Word

The Missionary-Theologian: Sent into the World, Sanctified by the Word

Gospel doctrine is the lifeblood of mission. Most missionaries in church history have prepared for the field with rigorous study and theological training, but there has been a move away from that in recent times. E. D. Burns contends that this is dangerous, leaving people ill-equipped to deal with the difficulties mission life brings. This brotherly plea challenges those who are already in, or are considering joining, the mission field to rest in Christ’s work and abide in his Word.

E.D. Burns, PhD, has been a missionary in the Middle East, East Asia, Alaska, and now Southeast Asia, where he develops theological resources and trains indigenous pastors and missionaries. From his international location, he also directs the MA in Global Leadership at Western Seminary. He is the author of A Supreme Desire to Please Him: The Spirituality of Adoniram Judson.

Some missionaries run toward the causes that make great videos. ‘Hindu surfers in Bali’ need the gospel too, don’t they?

The answer is to train and send missionaries who know their position in Christ (justification by faith alone) and live under the authority of God’s Word. Adoniram Judson, the first American Baptist missionary to Burma, is his primary example of one who rested in Christ in order to be used by him.

For Burns, missionaries are apologists. Paul’s message in Acts 17:16–32, for example, is a contextual argument with his audience in Athens. But Paul uses context precisely to make his point more strongly. He tells the Greek thinkers they should know the unknown god because God has spoken by raising Jesus Christ from the dead—thereby proclaiming that the one thing they could never believe is, instead, in continuity with their beliefs.

Burns makes explicit something that at times goes unstated—we seek fresh ways to communicate the gospel cross-culturally not so that it may be more palatable, but so that it confronts the culture more clearly with the scandal of Christ.

He shares his experience in an honor-shame culture. Instead of merely describing sin as law-breaking, which is no big deal in that context, he often appealed to the category of betrayal. This social category for sin struck closer to the heart of his interlocutor. The missionary-apologist is decidedly unapologetic.

Missionaries and the Church

Churches can sometimes place “unbearable burdens upon missionaries to stay unduly connected to their sending church” (129). Burns narrates how some missionaries are asked to prove their loyalty to the church that sent them through ministry at home and out of their target culture.

He confronts an overzealous claim to authority on the part of churches, many in cultures outside North America. “Obey your leaders and submit to them” (Heb. 13:17) is not a blank check for pastors to set conditions on the obedience of missionaries, especially given the multiple exhortations in that passage for believers to be discerning (13:7, 9).

Thus, church leaders should not presume to command missionaries about the specifics of their calling once they have been sent. At the same time, missionaries should be slow to claim divine authority for a particular effort apart from the consensus of church leaders. Ultimately, a distinction between “home,” “sending,” and “supporting” churches would help clarify lines of authority.

The Missionary-Theologian reminds us that the missionary calling requires maturity in Christ. Burns is convincing when he speaks against ways in which the gospel can be turned into something else, such as a guide to living a reasonable life. We will have no “Christianized philanthropists” (117) here. But the book suffers from its choice of genre and tone.

A distinction between ‘home,’ ‘sending,’ and ‘supporting’ churches would help clarify lines of authority.

Is this a manual for new missionaries or an argument among missionaries about proper priorities? Burns admits his style is “punchy and to the point” (24), but what could have helped new missionaries grow in theological depth tends toward polemic against “theological spinelessness” (155). We hear of “contemporary Christianity’s increasingly sloppy articulations of the gospel” (191). And this: “It is astounding how often we declare that we are called to cross a culture for the gospel’s sake and the reason we give is because we ‘love the people of that culture’” (60). It may be astounding, but we need a standard for deciding this sense and a discussion of what part this feeling may play in the subjective call of a missionary.

A manual for new missionaries would lead more gently and an argument about missionary methods needs further support. The book sets a high bar for theologically formed missionaries, but may not convince those that do not already agree with the thesis.

The concept of missionary-theologian, however, has potential. “It is nonsense to relegate the theologian to the seminary and the activist to the mission field,” Burns writes (92). Amen.

The recently resurrected title pastor-theologian recognizes that some pastors will participate in broader theological discussions. The pastor who is regularly helping a congregation perform its part in the drama of redemption will have something to contribute to the task of staging that drama in other places and times, often through teaching and writing.

Likewise, the missionary-theologian provides counsel and assistance to congregations in a different culture who are seeking to practice the drama of redemption. This happens both by taking the stage oneself in the work of evangelism and discipleship, while also advising those who are given responsibility to lead in their cultures. Such ministers must be bearers of the gospel tradition, sent out from churches, aware of cultural factors influencing the practice of the gospel, humble enough to spend time learning ways to communicate, and patient enough to earn the right to speak about the effective witness of the church.

By all means let us have more theologically informed missionaries, as Burns suggests. I pray that this book will lead more people to combine the offices of missionary and theologian.

Jon Hoglund is a lecturer in theology at Hanoi Bible College in Vietnam. He and his family serve with Training Leaders International.