Kevin DeYoung’s new book—Men and Women in the Church: A Short, Biblical, Practical Introduction—is a “meat and potatoes” kind of book, not “fire-hot salsa” (16). He’s providing a “non-angsty walk through the requisite biblical texts on men and women in the church with an eye toward clarification and application” (16). DeYoung—pastor, professor, and prolific author—writes with clarity of style, depth of theological astuteness, and an uncanny ability to sort and categorize ideas. He keeps his promise of writing a short, “intelligent and readable” book (20). I read the 152 pages in one sitting. It was fast reading—but not because it was fast food. I’d recommend it to anyone for whom this topic is new: a young believer trying to sort out sexuality craziness, couples seeking to better understand marriage, or even young ministers as they engage and involve women in their church.

DeYoung’s basic premise is to affirm classic complementarianism, which asserts that “men and women are not interchangeable” and that they “complement each other, meaning they are supposed to function according to a divine fittedness” (14). Though the word is bulky, it’s still the best way to describe the reality that God made men and women to be “different yet fitting together” (19). I appreciated the humble admission that complementarianism has fallen on hard times because of its abuses. As DeYoung makes clear, “The biblical pattern of male leadership is never an excuse for ignoring women, belittling women, overlooking the contributions of women, or abusing women in any way” (17). 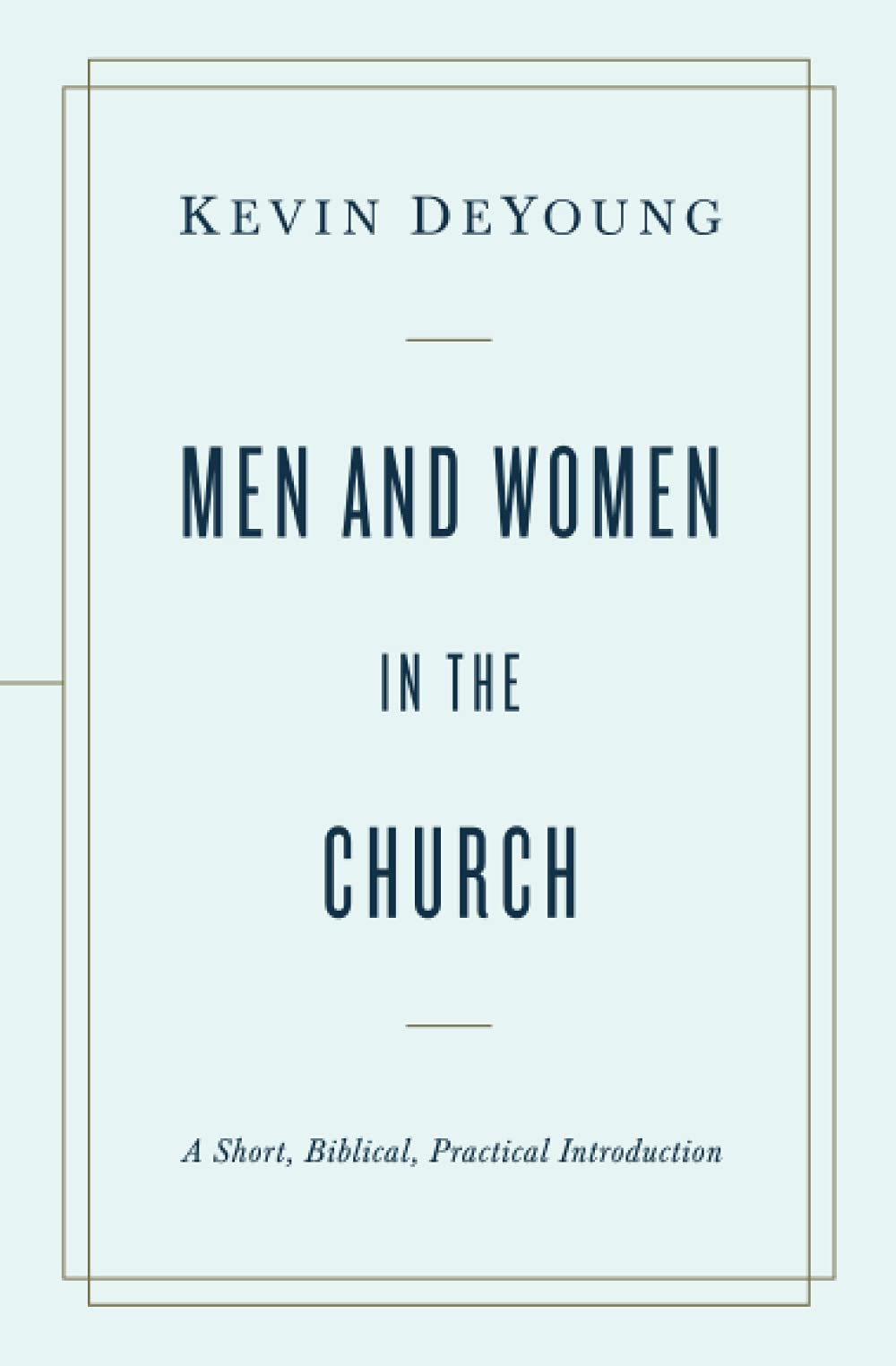 Men and Women in the Church: A Short, Biblical, Practical Introduction

Men and Women in the Church: A Short, Biblical, Practical Introduction

There is much at stake in God making humanity male and female. Created for one another yet distinct from each other, a man and a woman are not interchangeable—they are designed to function according to a divine fittedness. But when this design is misunderstood, ignored, or abused, there are dire consequences.

Men and women—in marriage especially, but in the rest of life as well—complement one another. And this biblical truth has enduring, cosmic significance. From start to finish, the biblical storyline—and the design of creation itself—depends upon the distinction between male and female. Men and Women in the Church is about the divinely designed complementarity of men and women as it applies to life in general and especially ministry in the church.

In Part 1, DeYoung examines the main biblical texts. He first goes back to Genesis and elucidates, in 15 points, the similarities and differences between Adam and Eve. Next, he examines the general pattern of male headship found in the Old Testament, which doesn’t mean women didn’t exercise any leadership at all. “We should not equate male leadership with female passivity,” he notes (38). Women drive the storyline of redemptive history, too—one need only think of the women in Exodus, whose actions provide the framework for God’s deliverance.

Beginning in chapter 3, DeYoung deals with the New Testament, pointing out that “Jesus takes a backseat to no one in being pro-woman” (43); nevertheless, Jesus also reaffirms male leadership when he selects the apostles. Chapters 4 to 7 focus on Pauline theology. DeYoung examines 1 Corinthians 11, Ephesians 5:22–33 and finally 1 Timothy 2:8–15—which affirm the general pattern both of male leadership and teaching in the church, and of male headship in marriage. His point is not to silence women completely: “At the very least, churches that do not allow women to speak in church under any circumstances are contradicting the instructions of Scripture” (62). In marriage, the woman is called to support, respect, and follow, and the man to lead, sacrifice, and care. DeYoung concludes the chapter with the importance of getting marriage right because it images Christ and the church. Living out this picture accurately is essential, for “nothing less than God’s full glory is at stake” (74).

In Part 2, DeYoung answers some basic objections—including misunderstandings of Galatians 3:28, mutual submission in Ephesians 5:21, and comparing the submission of women to slavery. He does not say that women aren’t endowed with leadership or teaching gifts, or that they are not called to ministry, but that those contexts are determined by Scripture.

He does not say that women aren’t endowed with leadership or teaching gifts, or that they are not called to ministry, but that those contexts are determined by the Scriptures.

Chapter 9 broaches the topic of how to raise boys and girls following the ABCs of sexual differentiation: Appearance, Body, Character, Demeanor, and Eager Posture. He is well aware that this approach is countercultural. Nevertheless, “God’s created order cannot be re-engineered by sinful human ingenuity. Manhood and womanhood will reassert themselves. The question is whether it will be healthy or unhealthy” (129).

The final chapter aims to uncover the nature of men and women, the ontology that underpins God’s design. To me the question seems to be: Do we focus more on our sameness and unity, or our difference and separateness? DeYoung shows he understands how the debate on the ontology of men and women has developed over the years:

Any attempt to recover biblical manhood and womanhood, or any efforts as Christians to recover from the recovering, must start with the recognition that sexual difference is not simply a marker of who may hold the office of elder; it is an indication of what sort of image-bearer God wants us to be in all of life. (134)

Manhood and womanhood cannot be reduced to authority and submission or to leadership and nurture. But these things are meaningful expressions of what it means to be a man and a woman, rooted not just in the names we give to people, but in nature itself. (136)

The valid point DeYoung adds to the debate is that men and women experience all of life differently, including following Christ as men and as women. We never transcend being men and women, including in our discipleship.

A steakhouse menu will please the meat-and-potato eaters, but not the vegan. In that sense, this book will appeal, on the whole, to complementarian-leaning readers. It wouldn’t surprise me if egalitarian readers find the menu tough to swallow. Expressions like “the subordination of women” (even though DeYoung means a willing placing of oneself into a God-ordained structure) may still leave a bad taste in their mouths. My hope is they’d at least try a bite.

We never transcend being men and women, including in our discipleship.

I believe the church should provide biblical correctives on both ends of the spectrum: cultures that subjugate women need to hear the message of equality and freedom in Christ; cultures that have “liberated” men and women right out of their male and female natures need the message of God’s beautiful, binary-sexed design. This book challenges progressive believers not to dismiss God’s created order, and conservatives to live as men and women in a way that sheds light on—rather than obfuscates—the gospel.

All in all, this is a clear, gracious, and compact resource that has potential to become the quick and easy reference guide to classic complementarianism for the foreseeable future.

Eowyn Stoddard is a Mission to the World church-planting missionary who has served in Berlin since 2000 alongside her husband, David. She enjoys teaching the Bible, discipling refugees in their newfound faith, and being a mom to five children. She blogs regularly at The Eowiggle.