Many Christians today have embraced the term “metanarrative.” On the whole, this has been a good thing, but we must not forget that the term was coined by postmodern deconstructionists who deny the existence of a single, sacred, overarching narrative. When postmodernists use the term they aren’t referring to the sacred story of creation, fall, redemption, and restoration that underlies all other stories, but rather any number of man-made narratives used to legitimize social, political, or economic systems.

In his new book, The Magnificent Story: Uncovering a Gospel of Beauty, Goodness, and Truth, James Bryan Smith—a theology professor and the director of the Apprentice Institute for Christian Spiritual Formation at Friends University in Wichita, Kansas—celebrates the Bible as God-made metanarrative. But he makes effective use of postmodernist critiques to expose the way Christians on both right and left have constructed shrunken metanarratives to justify their own agendas, and thus failed to do justice to the richness of the Bible’s story. Still, Smith does not wholly escape constructing his own metanarrative, inadvertently based on his own historical moment.

Smith does an excellent job critiquing two false metanarratives that he dubs the “do-good-works gospel” and “the shaming and scary gospel.” According to the former, which Smith associates with the left, “God is distant and uninvolved, so it’s up to us to make the world better” (21). This false narrative has its strengths, but it “shrinks the gospel to goodness, leaving out the truth of Jesus’s resurrected life, ignoring the beauty of sacrifice and redemption” (21).

The latter, which Smith identifies with the right, embodies an extreme version—almost a parody—of penal substitution as conveyed through some gospel tracts. This gospel tells the story of a God who is not mostly absent, as in the former story, but who is perpetually angry: “you are bad, God is mad, but Jesus took your beating. So try harder and you might make it to heaven” (26). Smith identifies this gospel with American revivalism and faults it for reducing the message of salvation to a “sales pitch” (26).

The trouble with both shrunken metanarratives, Smith argues, is that “they allow us to stay in control. . . . Both turn out to be individualistic and leave no room for mystery and community. Worst of all, they make God small and mean” (27). While the former says that it is “up to me to save the world” (27), the latter says “I can control God by having the right understanding of my depravity, the right view of the atonement, and the right prayer to bring me into heaven” (27).

Smith seems well aware that the main audience for his book will be evangelicals who have little problem with his unpacking of the “do-good-works gospel,” but who take umbrage, as did I, to his negative presentation and appraisal of “the shaming and scary gospel.” Indeed, many will consider the latter gospel to be Christianity.

Whether or not you agree with The Magnificent Story will depend on whether you find Smith’s presentation of the gospel story of goodness, truth, and beauty to be compelling, conducive to discipleship, and faithful to the metanarrative of Scripture. 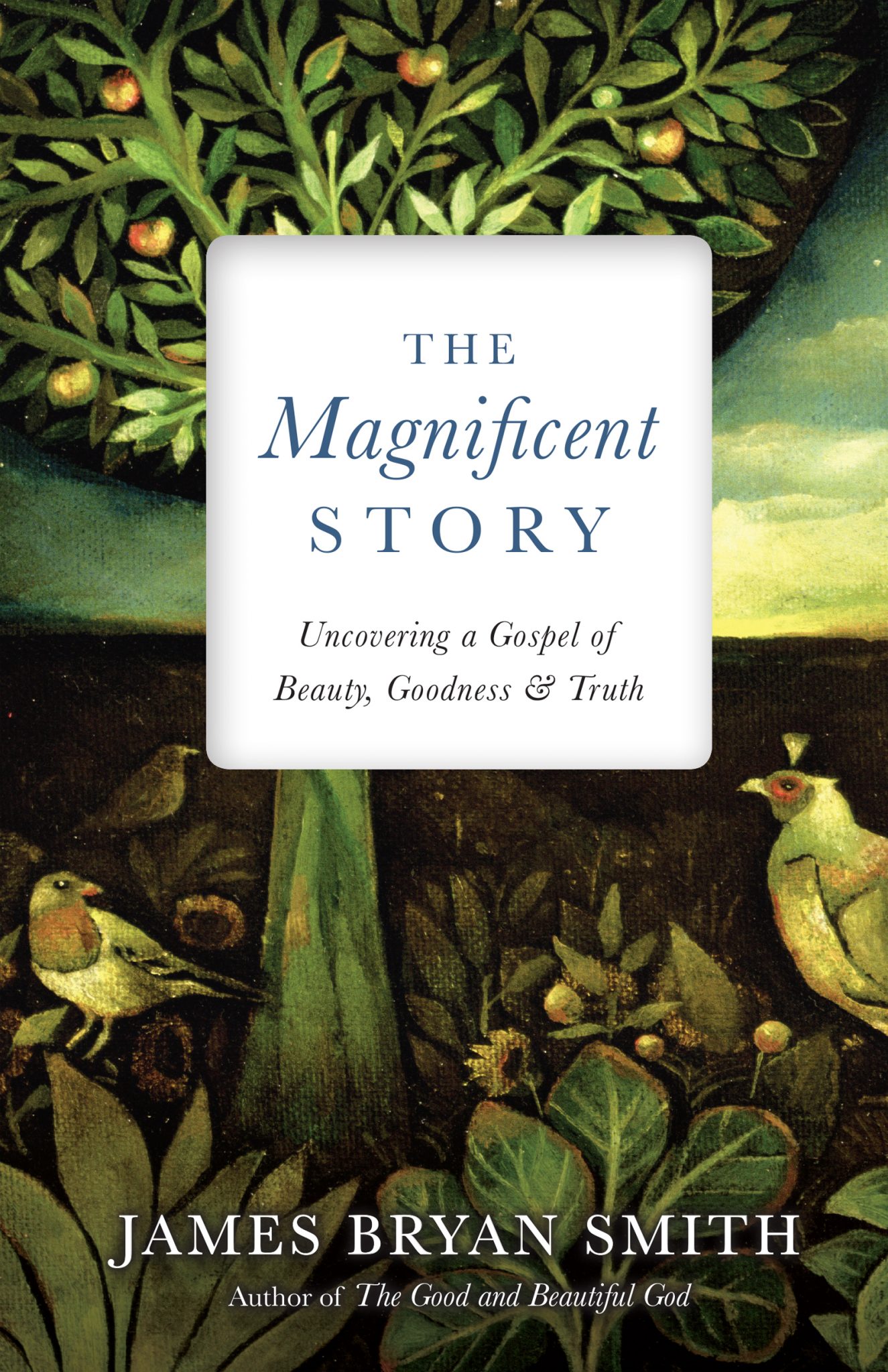 The Magnificent Story: Uncovering a Gospel of Beauty, Goodness, and Truth

The Magnificent Story: Uncovering a Gospel of Beauty, Goodness, and Truth

Smith’s Version of the Biblical Story

Although I was left unconvinced by Smith’s somewhat revisionist reading of Romans, I was inspired and convicted by his wider vision for the Christian life and the kingdom of God. Surely Smith is correct that we must expand our understanding of the atonement to take in not only the cross, but Christ’s descent into hell and resurrection. Borrowing from Greek Orthodoxy, especially Athanasius’s On the Incarnation, Smith reminds us that the final goal of salvation is theosis or deification: that God in Christ became like us so that we could become like him.

Salvation means more than having our sins cancelled; it means participating in the life of the Trinity. Our true purposeful end isn’t to float away to paradise; it’s to play our role in previewing the new heaven and earth. Smith is by no means the first writer to make these distinctions—both C. S. Lewis and N. T. Wright have done so most eloquently—but Smith breathes life into them by uniting his vision for salvation and heaven to beauty, goodness, and truth.

Smith, in fact, uses beauty, goodness, and truth as his criteria for judging whether our gospel reflects the full power and glory of the Trinity. Faced with advocates of “the shaming and scary gospel” who tell him we must get people to commit to Jesus, Smith’s

response is always the same: “We need to get people to know Jesus.” When they come to know Jesus, they will be struck by his beauty. It will sneak past defenses and speak to a generation suspicious of truth claims and unconvinced by moral assertions. (69)

As a professor who works closely with the generation to which Smith refers, I can attest to the effectiveness of this approach. Evangelicals need to be reminded that the beauty of Christ is a powerful motivator to change one’s beliefs and behaviors.

Evangelicals need to be reminded that the beauty of Christ is a powerful motivator to change one’s beliefs and behaviors.

Though he comes perilously close to soft-peddling original sin, Smith also does well to remind us that the fall, while it stripped away our likeness to God, didn’t rob us of God’s image. “Despite our own sinfulness, brokenness, and proneness to wander from the throne of God, we have a deep need for goodness: not only to see the good but to be good” (82). I certainly agree with gospel tracts like The Four Spiritual Laws—and John the Baptist!—that the recognition of our own sinfulness (the bad news) is a prerequisite for embracing the gospel (the good news). Still, Smith is surely correct in asserting that, even in our fallen state, the desire for goodness remains and should be appealed to by evangelists: “We want to be good, long to be good, and are deeply saddened when we discover others do not think we are good” (83).

The Magnificent Story is a passionate book by an ordained Methodist minister with a pastoral heart, but it presents a gospel that often proves to be as shrunken as the two false narratives that he critiques. Smith writes compellingly about God’s love, beauty, truth, and goodness, but he leaves out God’s holiness, his righteous wrath against sin, and his justified jealousy toward his adulterous bride.

Marcionism—one of the subtlest, most dangerous heresies of the second-century church—sought to drive a wedge between what Marcion perceived as the (solely) wrathful God of the Old Testament and the (solely) merciful God of the New. Over against those who would make such an unbiblical division, Smith calls, rightly, for a unified vision of the Trinity. Citing Jesus’s claim that whoever has seen him has seen the Father (John 14:9), Smith reasons: “Isn’t Jesus telling us that he and God the Father are like a mirror? If that is true, then why do we think of God the Father as angry and mean and Jesus as compassionate and forgiving?” (40). This is sound hermeneutical advice, but unfortunately Smith doesn’t always follow it.

In Smith’s version of the magnificent story, Jesus’s love and mercy end up being divorced from God’s holiness and justice. Not only is God’s righteous wrath against mankind (flood and Babel) and against those pagan nations who oppressed his chosen people left out; we hear nothing of Jesus’s cleansing of the Temple, his verbal attacks of the Pharisees, or his often terrifying appearances in Revelation. Yes, the triune God of the Bible is loving and merciful, but he is also a consuming fire (Heb. 12:29; cf. 10:31).

The triune God of the Bible is loving and merciful, but he is also a consuming fire.

Smith is sincere, but the metanarrative he constructs tends to project onto the Trinity a kind of modern Western egalitarianism-inclusivism that would break down all essential distinctions and hierarchies. Smith borrows frequently and well from the traditions of the Orthodox Church, highlighting its focus on theosis, its use of the word perichoresis to describe the Trinity (which Smith conveniently and reductively translates as “mutual submission”), its discomfort with Augustine’s definition of original sin, its emphasis on the incarnation and resurrection alongside the cross, and its iconographic portrayal of the Trinity. But he seeks to do so apart from the strong Orthodox focus on hierarchy, particularly her key teaching that the Father is the eternal source (or arche) of the Trinity.

Please don’t misunderstand me. Smith is a true and orthodox minister of the gospel, and his book offers an expansive vision of salvation that believers, especially evangelicals, would do well to heed. But the story he tells leaves out two aspects of Christian reality that Americans desperately need to hear and understand.

Smith provides a beautiful story, but Christians need an even more magnificent one.

Louis Markos, professor in English and scholar in residence at Houston Baptist University, holds the Robert H. Ray Chair in Humanities. His 20 books include From Achilles to Christ, Lewis Agonistes, On the Shoulders of Hobbits, and The Myth Made Fact: Reading Greek and Roman Mythology through Christian Eyes.