In 2016, my late colleague Larry Hurtado’s Destroyer of the Gods: Early Christian Distinctiveness in the Roman World offered a compelling explanation of early Christianity’s rapid spread in an initially hostile Roman culture. Although Hurtado’s book is not in any sense a missiological textbook, its account of the early church’s growth nonetheless reminded readers of an important principle: churches that grow are simultaneously familiar and foreign to their host cultures.

Such a church will combine “a certain level of continuity with its cultural setting,” while also holding a loving, constructively critical posture toward that culture. It’s neither a baptized replica of whatever the local unbelievers think and do nor a curmudgeonly voice that only speaks in negative, condemnatory tones about its neighbors. The church inhabits culture differently.

Although Hurtado’s book assumes this element of cultural continuity between the early church and its host culture, its emphasis falls on the things that made early Christians different: they perplexed their unbelieving neighbors in their care for unwanted infants, their countercultural vision of sexuality and the dignity of the human body, their ethic of love for neighbor, and their monotheistic readiness to bridge ethnic and national divides.

Alongside this—and perhaps more surprisingly to some today—Hurtado showed that the early church was countercultural in its love of books. In the Greco-Roman world, Christians were both people of the Book, and people of the books: they embraced the shift from scrolls (cumbersome and bulky) to the new technology of their day, the codex (the compact, highly portable precursor to the modern book). For the most part, ancient Christians authored, bought, and used far more books than their pagan neighbors. Those to whom the Word had come became bibliophilic in general. They cherished books. 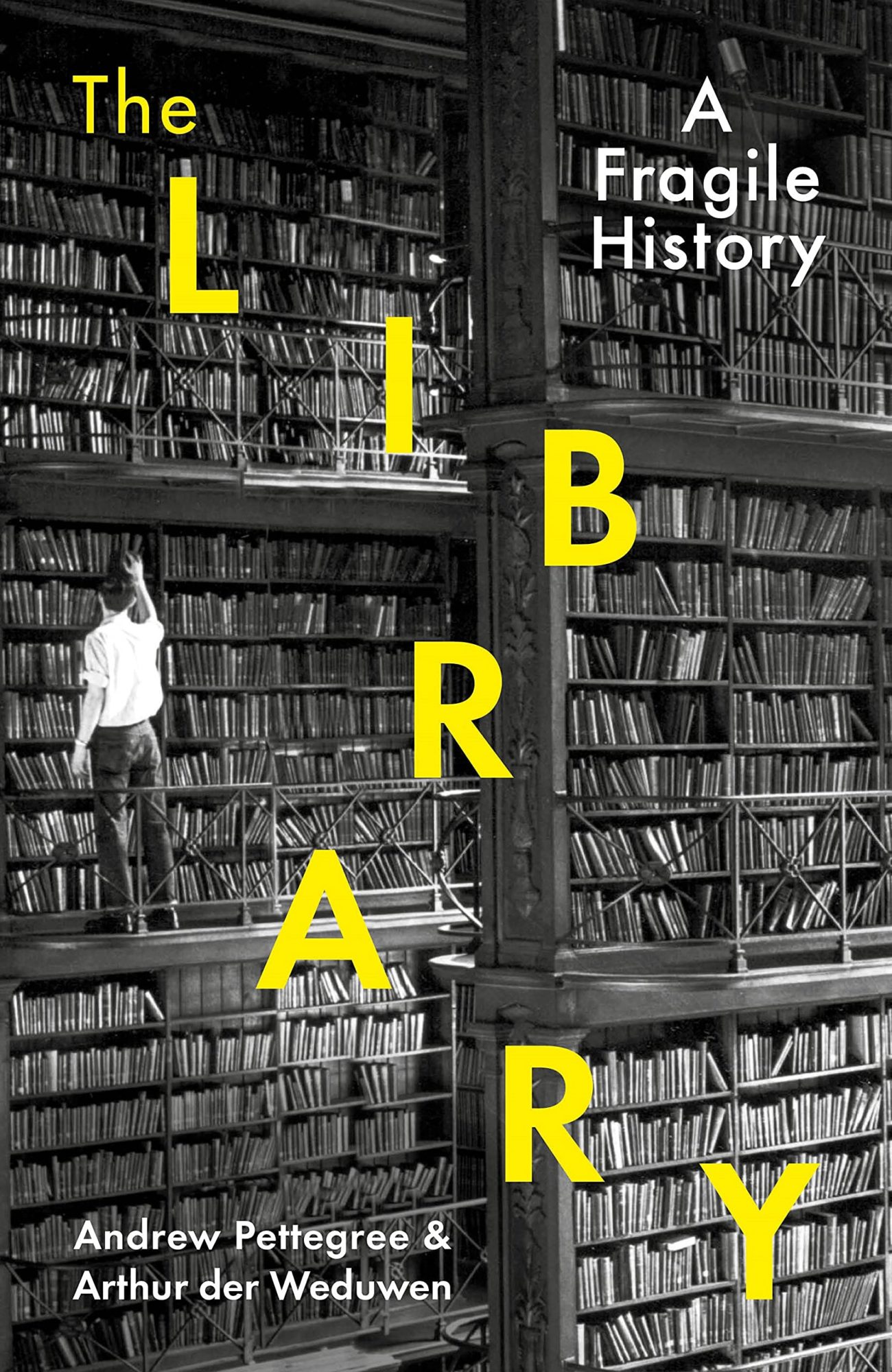 The Library: A Fragile History

The Library: A Fragile History

Famed across the known world, jealously guarded by private collectors, built up over centuries, destroyed in a single day, ornamented with gold leaf and frescoes or filled with bean bags and children’s drawings—the history of the library is rich, varied and stuffed full of incident.

In this, the first major history of its kind, Andrew Pettegree and Arthur der Weduwen explore the contested and dramatic history of the library, from the famous collections of the ancient world to the embattled public resources we cherish today. Along the way, they introduce us to the antiquarians and philanthropists who shaped the world’s great collections, trace the rise and fall of fashions and tastes, and reveal the high crimes and misdemeanours committed in pursuit of rare and valuable manuscripts.

Hurtado’s work provided an excellent guide to the early Christian community as one that devoured the written word. More recently still, the historians Andrew Pettegree and Arthur der Weduwen, both of the University of St. Andrews, have produced a superb book—The Library: A Fragile History—that pairs well with Hurtado’s volume in helping readers to understand Christianity’s complex relationship to book culture across the broad sweep of history, from the ancient world to the present day.

Beginning with libraries of cuneiform tablets in Mesopotamia and ending up in today’s world of e-readers and Google Books, Pettegree and der Weduwen provide a detailed, vivid account of the history of the library. Although The Library begins in pre-Christian history (with vast collections of clay tablets in the ancient Near East, the famous library in Alexandria, and so on), and has occasional glances toward the great libraries of the Islamic world and of East Asia, it’s for the most part a history of libraries in the West—where the profound cultural transformation brought about by Christianity also extended to book and library culture.

While the book covers a tremendous amount of material (with some skill), it’s held together by a small number of existential questions about the nature of libraries: What is a library? Why does it exist? Is it essentially a vanity project to pay tribute to the greatness of its owner, and only open to a select handful of visitors, or a resource that should be publicly funded and available to all? Should its shelves be stocked with whatever the people want to read or be led by the librarian’s discernment in selecting books that will benefit visitors? And in very recent times, as the print book faces the challenges of mass digitization, do libraries need to be physical environments stocked with printed books at all? (The book’s epilogue on the monopolization of digitization and online libraries by Google and Amazon and the challenges this poses—i.e., the dystopian possibility that those private companies would have the right to approve or censor which books are made available to the world—makes for alarming reading.)

As the title notes, the library is a fragile institution. A particular library’s contents are always a threat to someone, and in the absence of human ill will, its books are always susceptible to damp and mold. I hadn’t expected to be shocked at the sheer number of libraries and books—millions and millions and millions of volumes—that have been destroyed in war, left to the elements, looted, burned by those who hated their contents, repurposed by those who thought them worthless (for example, French revolutionaries who used the pages of classical theological texts to wrap cheese), or stolen by thieves who thought they were worth a pretty penny. (The book mentions one noted book thief, a German theologian, who stole enough valuable library books to earn himself imprisonment in a Soviet gulag.)

The book’s account of the role played by early monastic communities—places where books (Christian and pagan) were preserved through repeated copying—is striking. The criticisms of the Reformation’s negative effect on European library culture are thought-provoking and, for a Reformed reader, make for painful reading at points. As a counterpoint, the portrayal of Puritans crossing the Atlantic, bringing with them boxes upon boxes of seminal theological works—libraries housed in wooden crates, rising and falling with the waves, but libraries nonetheless—was moving.

Clearly, the history of Christianity is one of bibliophilia, although that love does not extend to all books in the same way: Pettegree and der Weduwen highlight the willingness of medieval monks to preserve pre-Christian literature, the readiness of early modern Protestants and Catholics to burn rival Christian texts, and later, the desire of (some) French revolutionaries to purge Europe of theological literature in general.

Clearly, the history of Christianity is one of bibliophilia, although that love does not extend to all books in the same way.

While I’m reluctant to criticize such an accomplished book, I did wonder whether more might be said on Christianity’s complex relationship to books: like the medievals before him, for example, the Protestant reformer John Calvin was committed to the study and preservation of pre-Christian pagan literature. (In that Reformation-era mindset, non-Christian and heretical Christian literature were two very different things and faced distinct reactions.)

Reading The Library as a theologian, I was struck by the reminder that Christianity provides idiosyncratic reasons to value books written by non-Christians. For example, Calvin’s rationale for reading “profane authors” was that the Holy Spirit also gifts unbelievers with skills in writing and truth-telling. “In despising the gifts,” Calvin wrote, “we insult the Giver.”

Love of Books, Love of Neighbor

It’s hard to find anything close to Calvin’s outlook in, for example, the secularist beliefs of French revolutionaries who wanted to destroy or dishonor writings from beyond their own ideological camp, or the Nazis who destroyed Jewish libraries while building their own closed library of Jewish literature only in order to understand those whom they wished to murder.

I have no doubt that Pettegree and der Weduwen are right in saying that Christianity’s contribution to library and book culture is mixed: the people of the book are not entirely innocent of bibliocide. Most fundamentally though, when reading this book, I was struck by the sense in which it confirms Hurtado’s insight that Christianity grounds its love of books in a prior love of neighbor. That much seems clear in this work’s handling of those whose own deep rejection of Christianity’s long reshaping of the West—in revolutionary France and Nazi Germany—was awfully evident in their views of the books written by their neighbors.

James Eglinton is Meldrum senior lecturer in Reformed theology at the University of Edinburgh. He is the author of Bavinck: A Critical Biography (Baker Academic, 2020). You can follow him on Twitter.