The best books about C. S. Lewis make us want to turn, or return, to Lewis himself. Joe Rigney’s new book, a sort of systematic theology for Lewis, does just that. Lewis on the Christian Life: Becoming Truly Human in the Presence of God is an irresistible hook for those less acquainted with Lewis (who will now scramble to read him) and a familiar feast for old Lewis friends who wish to study his thoughts on the Christian life in a single commentary.

Pastor at Cities Church and assistant professor of theology and literature at Bethlehem College and Seminary in Minneapolis, Rigney is a veteran fan and disciple of Lewis. He’s also the author of Live Like a Narnian: Christian Discipleship in Lewis’s Chronicles, which proved I can love reading about Narnia almost as much as I enjoy reading Narnia itself. Still, I was skeptical as I cracked Lewis on the Christian Life. Why would I read several hundred pages about Lewis? Why not just read Lewis? I feared this book would be but the tinny echo of a grand cathedral bell.

I was quickly surprised. Rigney goes far beyond merely summarizing Lewis. He expounds. Explains. Extrapolates. He offers plenty of his own invaluable insight. He faithfully mirrors and magnifies Lewis like the final movement in a sonata. Lewis is the exposition, Rigney the recapitulation. Much of my delight came in hearing the same truths spoken in new words, after all.

The book’s first, most obvious triumph is its skillful organization. The topical structure is amazingly helpful. For one, it’s just plain fun to spelunk around in everything Lewis wrote concerning redemption, atonement, the incarnation, the church, liturgy, faith, imagination, reason, love(s), the resurrection, damnation, and the diamond-hard realness of heaven. Along the way, Rigney interacts heavily with Lewis’s key theological works: Mere Christianity, The Screwtape Letters, The Four Loves, The Problem of Pain, Letters to Malcolm, and others. (Notably, he omits The Chronicles of Narnia, because he has already explored these elsewhere. Go read Live Like a Narnian!) Rigney weaves their truths together in such a way that you feel (as he hopes in the introduction) “the organic unity of Lewis’s thought.”

The deep-dive approach also allows Rigney to unite Lewis’s thoughts on trickier subjects into single, coherent explanations. For example, Lewis’s view of God’s sovereignty and man’s freedom, taken one analogy at a time sprinkled throughout his writings, might easily be misunderstood. But by clustering Lewis’s treatments, Rigney allows them to play in concert and so clarify each other, creating a lucid picture.

Within each topic, Rigney pushes the issue of “the Choice,” the fundamental fork in the road to which Lewis relentlessly drives us. The Choice is this: God or self. In every circumstance, the options are only two: Will we put God at the center, or ourselves? The Choice confronts us at every turn: pride or humility, forgiveness or resentment, obedience or betrayal, self-forgetting love or vampiric affection, heaven or hell. 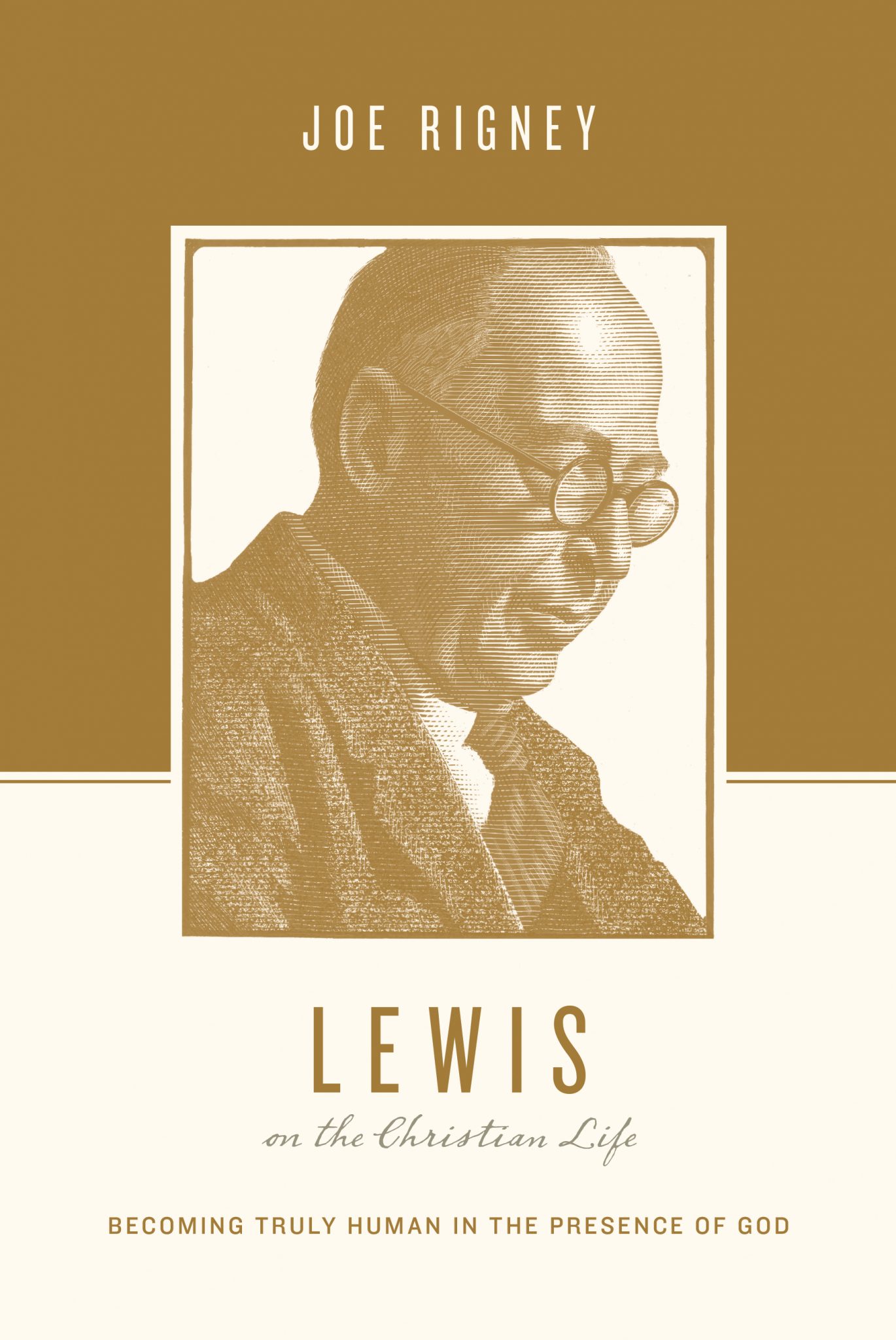 Lewis on the Christian Life: Becoming Truly Human in the Presence of God

Lewis on the Christian Life: Becoming Truly Human in the Presence of God

C. S. Lewis excelled at plumbing the depths of the human heart, both the good and the bad, the beautiful and the corrupt. From science fiction and fantasy to essays, letters, and works of apologetics, Lewis has offered a wealth of insight into how to live the Christian life.

Rigney explores the center of Lewis’s vision for the Christian life—the personal encounter between the human self and the living God. In prayer, in the church, in the imagination, in our natural loves, in our pleasures and our sorrows, God brings us into his presence so that we can become fully human: alive, free, and whole, transformed into the image of Jesus Christ.

Rigney’s goal for the reader, as the subtitle suggests, is that you become “truly human,” that you become more yourself—the God-cast, Christ-bought, Spirit-tempered creature you are meant to be—by seeing the Christian life through Lewis’s eyes.

As I mentioned, Rigney offers plenty of his own insight. I want to mention two observations that particularly struck me.

Discussing The Great Divorce, Rigney notes the mirth and invincible joy of the saints in glory. In heaven, we’re untouchable. No longer can we be harmed by manipulations, accusations, and jealousies from others.

But perhaps the best part is that we don’t need to die to receive this protection. The resurrection’s shining immunity is designed to work back into our earthly lives. “The invulnerability of heaven . . . flows from the joy of being forgiven,” Rigney explains. “Rooted and grounded in the love of God, we are freed to love manipulators without being manipulated.”

Because we have been freely loved, we’re free to love without fearing whether that possessive mother will exploit our love, or stressing over whether that annoying friend will be appropriately grateful, or any such thing.

Lewis depicts hell as an everlasting plunge into self-consuming nothingness and evil. Rigney draws a dramatic connection between this picture and the prophet Joel’s depiction of the day of the Lord as devouring famine followed by Yahweh’s devouring army:

More frightening is Lewis’s next observation, which Rigney paraphrases:

We are the hungry child and the innocent villager, yes. But we are also the drought, the locust, the barbarian. The army that Yahweh leads against us consists of the inhuman and decayed versions of ourselves. (emphasis mine)

But it was Rigney’s next inference that grabbed me by the throat: “Perhaps hell is simply the devouring, with no sense of the damned ever being finally devoured.” I don’t think hell has ever been darker, deader, more horrific.

Then, having painted this grisly scene, Team Rigney-Lewis refuses to let us dodge the truth. “This [isn’t] about your wife or son,” Lewis asserts, “nor about Nero or Judas Iscariot; it is about you and me.” Will it be hell or heaven? The Choice is ours.

Indeed, the Choice is ours not simply at the last split second before death (assuming we were granted that split second to repent) but every second of every day. Choices pile up. Every fork in the road splits off into more forks, and more, so that your micro-decisions lead you higher into God or lower into self.

There is no moment, no seemingly irrelevant byway, in which you are not becoming your true self in the presence of God, or a self-ingesting Gollum.

Become yourself, or eat yourself forever.

A final important note: Rigney is no blind follower of Lewis. He’s not a yes-man. He respectfully conducts himself as a likeminded critic—just the sort of jolly, sharply analytical, keenly Bible-centric friend Lewis so enjoyed. Rigney offers iron to Lewis’s iron. Where he disagrees with Lewis, he says so.

Take, for example, Lewis’s puzzling fumble with the issue of penal substitution. Rigney’s courteous takedown is superbly helpful for wide-eyed Lewis-lovers who might scratch their heads in dismay as they wonder, “Can I really disagree with C. S. Lewis?” Yes, you can, and you should. But do it like Rigney, with a twinkle in your eye and a cheerful pint raised to Jack sitting opposite you by the fire.

This lush National Geographic to the world of Lewis is filled with close-ups and angles we might have never seen, or perhaps they’re ones we’ve witnessed a hundred times. Either way, having flipped through the photos, let’s double-knot our shoes and go walking with Lewis himself as he does his best to lead us to our Real Country.

Rigney points to Lewis, Lewis points to Christ—a three-tiered waterfall. It’s tempting to stop at each one, thinking This is it! But look higher. There’s more. As Rigney writes, “True personality lies ahead.” Because up ahead waits a Person.

Gwen Burrow is a writer, editor, and event planner in Moscow, Idaho.