In this collection of essays, Jesus and the God of Israel: God Crucified and Other Studies on the New Testament’s Christology of Divine Identity, Richard Bauckham republishes his classic, God Crucified (Eerdmans, 1998), along with seven additional chapters on NT Christology, most of which revise previously published essays. Although one could read each chapter as a stand-alone piece, what holds the book together is Bauckham’s aim to demonstrate that ‘earliest Christology was already the highest Christology’ and a ‘fully divine Christology, maintaining that Jesus Christ is intrinsic to the unique and eternal identity of God’ (p. x). In this regard, Bauckham employs the term ‘divine identity’ both to distinguish it from later patristic discussions of function and ontology and to place NT Christology within the context of Second Temple Judaism and Jewish understandings of monotheism.

Chapter 1, ‘God Crucified’ (1–59), reprints Bauckham’s seminal publication that Jesus was identified ‘directly with the one God of Israel’ (3). This contrasts with scholars who argue that earliest Christology either (a) was incompatible with a strict Jewish monotheism or (b) appropriated Jesus into a more elastic Jewish monotheism that had room also to include divine or semi-divine intermediary figures. Bauckham’s complex argument should perhaps be summarised below in very broad strokes. First, in Second Temple Judaism, we find a self-consciously strict and monolatrous worship of the one unique God who revealed himself to Israel (e.g., Exod 34:6) and is the sole Creator and Ruler of all things. Within this divine identity, furthermore, Bauckham identifies a specific category of ‘divine personifications’ of God himself (e.g., his Spirit, Word, and Wisdom) that are to be distinguished from non-divine angelic beings and exalted patriarchs. Second, the NT authors include Jesus deliberately and consistently as the unique and sovereign God who created all things (e.g., Matt. 28:17; 1 Cor. 8:4–6; Eph. 1:21–22; Phil. 2:9–11; Heb. 1:4; Rev. 5). Indeed, this ‘highest possible Christology. .. was central to the faith of the early church even before any of the New Testament writings were written, since it occurs in all of them’ (p. 19). Third, in the NT texts-particularly Phil. 2:9–11, Revelation, and John’s Gospel, all of which take their cue primarily from a ‘Christian’ exegesis of Isa. 40–55-God’s divine identity was uniquely revealed to the world through the incarnation, death, and resurrection of Jesus.

Chapter 2, ‘Biblical Theology and the Problems of Monotheism’ (60–106), tackles the difficult issue of defining ‘monotheism’ and assessing whether in fact the authors of the Scriptures presupposed a ‘monotheistic’ belief. Bauckham begins by suggesting that the term ‘monotheism’ is a misleading Enlightenment category. After engaging critically with N. MacDonald’s Deuteronomy and the Meaning of ‘Monotheism’ (Mohr Siebeck, 2003), Bauckham concludes that even if Deuteronomy does not deny that other gods may exist, it is nevertheless clear from this text ‘that YHWH appears in a class of his own’ (71). Bauckham then argues against the view of R. Gnuse that exclusive Jewish monotheism subsequently developed during the late monarchical period. Rather, Jewish monotheism in the Hebrew Bible is a consistent contrast between YHWH and all other gods. After establishing this part of his argument, Bauckham argues for a biblical theology of monotheism by pointing out those christological texts in the NT that clearly appropriate the Jewish Shema’ (Deut. 6:4–6), including Rom. 3:28–30; 1 Cor. 8:1–6, and John 10:30. Bauckham thus concludes, ‘Exclusive devotion is now given to Jesus, but Jesus does not thereby replace or compete with God the Father, since he himself belongs to the unique divine identity’ (106). 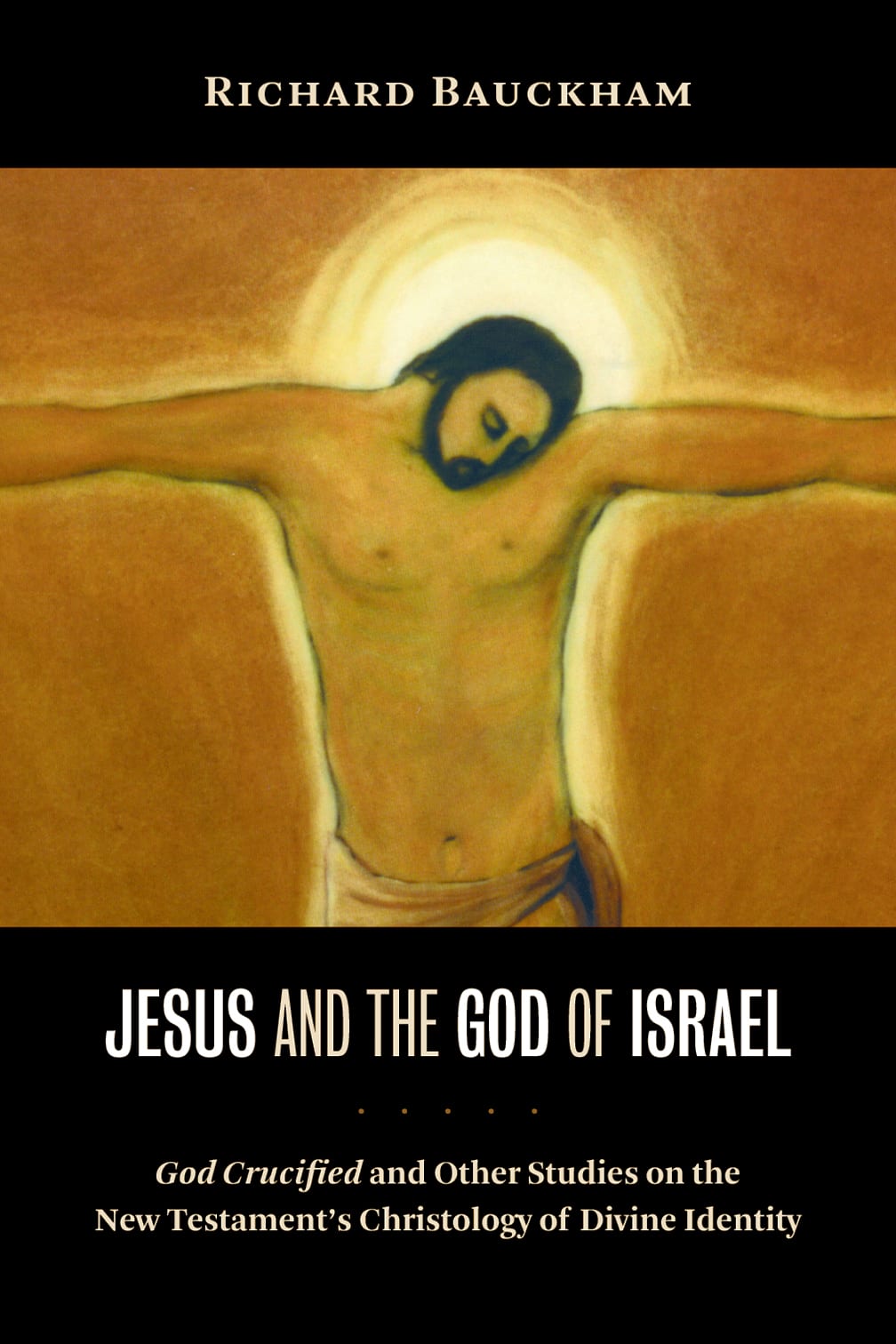 Jesus and the God of Israel: God Crucified and Other Studies on the New Testament's Christology of Divine Identity

Jesus and the God of Israel: God Crucified and Other Studies on the New Testament's Christology of Divine Identity

This book is a greatly revised and expanded edition of Richard Bauckham’s acclaimed God Crucified: Monotheism and Christology in the New Testament (1999), which helped redirect scholarly discussion of early Christology.

Chapter 3, ‘The “Most High” God and the Nature of Early Jewish Monotheism’ (107–26), turns to the issue of Jewish monotheism in the Second Temple period. In his investigation of the use of the phrase ‘the most high God’ in the literature of this period (unfortunately, he does not also discuss epigraphic evidence), Bauckham argues that this phrase denoted an ‘exclusive’ monotheism, that is, the belief that the Jewish God was supreme and transcendent over all other beings and not simply that he was chief of many gods. At the back of the chapter, Bauckham includes a helpful table indicating all the occurrences of the phrase God ‘Most High’ in Jewish literature from 250 b.c.–a.d. 150.

Chapter 4, ‘The Worship of Jesus in Early Christianity’ (127–51), expands Bauckham’s article ‘Jesus, Worship of’ in the Anchor Bible Dictionary. Here Bauckham sketches the early evidence for the worship of Jesus, including prayers, doxologies, and hymns. Along the way, Bauckham helpfully includes some ‘pagan’ evidence as well, which demonstrates from an outsider perspective that Christianity was defined by the worship of Jesus. Bauckham concludes by arguing that ante-Nicean christological discussions contained two trends, one that reflected Jewish monotheism and the other ‘Christian Platonism’. The danger of the first trend, Bauckham argues, was a possible devolution into modalism. But the danger of the latter ‘was the loss of monotheism in the Judeo-Christian sense’ (148). And it was Nicean (and Chalcedonian) doctrines that eventually provided the theological language that held together the worship of Jesus with monotheistic belief.

Chapter 5, ‘The Throne of God and the Worship of Jesus’ (154–81), both expands slightly on Bauckham’s argument in chapter 1 and freshly discusses some of the relevant literature of the Second Temple period (e.g., Parables of Enoch, Ezekiel the Tragedian). To be sure, he claims that it is a false trail to search for parallel developments to the church’s ‘Christology of divine identity’ in pre-Christian Judaism (although Jewish monotheism was open to this development), chiefly because the NT authors were involved in a creative exegesis of key biblical texts (e.g., Pss. 2, 8, 110; Dan. 7). He concludes that because early Christian texts ascribe worship to Jesus (e.g., Matt. 28:17; John 5:23) and depict him as sitting on the heavenly throne of God (e.g., Eph. 4:10; Heb. 1:3–4; Phil. 2:9), he must therefore have been regarded as having the ‘characteristics of the divine identity that were regarded in Second Temple Judaism as distinguishing the uniqueness of the one God’ (181).

The final three essays in this volume are contributions not previously published elsewhere. The first of these instalments, ‘Paul’s Christology of Divine Identity’ (182–232), aims to demonstrate that Paul’s Christology ‘was framed within the familiar Jewish framework of creational, eschatological and cultic monotheism’ (185), that is, Paul’s Jesus was identified with the sole creator and ruler of the world who would return to establish his universal kingdom and therefore should be worshipped as the one true God. His argument is wonderfully documented, but it can be sketched here only very briefly. First, Bauckham sets out the evidence where Paul identifies YHWH texts in Israel’s Scriptures with Jesus (building upon the seminal work of D. Capes). Second, a large number of these YHWH texts have specific reference either to creational or eschatological monotheism. In this regard, Bauckham discusses passages such as Rom 10:13 (Joel 2:32), Phil. 2:6–11 (Isa. 45:23; 52:13; 53:12), and 1 Cor. 8:5–6 (Deut. 4:35, 39; 6:4). Third, Bauckham posits that the ‘Jewish precedents for Paul’s Christology of divine identity are minimal’ (232), even if similar exegesis was practised in other early Christian texts (e.g. the Gospels, Hebrews, 1 Peter).

Chapter 7, ‘The Divinity of Jesus in the Letter of [sic] the Hebrews’ (233–53), turns specifically to the Christology in Hebrews. Here Bauckham argues that the three categories of Son, Lord, and High Priest are all discussed (exegetically) in order to depict Jesus as sharing both in divine identity with God and in human solidarity with his people. His helpful treatment includes a fresh discussion of themes in Hebrews such as the significance of angels (Heb. 1–2), the priesthood of Melchizedek (Heb. 7), and the divine eternity of Jesus (Heb. 13:8).

Bauckham’s final chapter, ‘God’s Self-Identification with the Godforsaken: Exegesis and Theology’ (254–68), is devoted to the theological significance of the cry of Ps. 22:1 on the cross in Mark 15:34. Bauckham correctly argues that this cry of dereliction, when read in the context of allusions to several other psalms of lament in Mark’s passion narrative, must be understood within both the context of Ps. 22 and the other psalms of lament in the Hebrew Psalter. In this way Jesus’ cry on the cross clearly identified with all the godforsaken ‘by entering the situation of humanity at the deepest level of the human plight: the absence of God’ (268).

Bauckham’s contribution to our understanding of NT Christology is breathtaking and persuasive at so many levels, from his exegesis to his theological conclusions. In this regard, his handling of the biblical text and of other Jewish literature from the Second Temple period is remarkable, as is his knowledge of a huge swath of scholarly inquiry on the subject of Jewish monotheism and Christology.

Of course, when bringing together a collection of essays, one is in danger of unnecessary repetition and/or slightly compromising the shape of the work as a whole. Bauckham is by no means immune to this reality, and although he attempts to tie the chapters together logically, overlap and slight disjointedness was inevitable. A discussion of Phil. 2:6–11, for example, occurs in no less than three chapters (1, 5, and 6). Furthermore, isolated arguments sometimes needlessly make their way in more than one chapter (e.g., his discussion of the Shema’ in chs. 1, 5, and 6), while other arguments could have been developed more fully (neither did the volume include a concluding chapter). Readers may also be slightly frustrated that although the volume has subject and Scripture indices, it does not contain a bibliography either at the end of the book or at the back of each chapter.

These minor blemishes do not detract from the significant contribution Bauckham has made to our understanding of earliest Christology. Indeed, this volume is a tremendous advance in the field and is essential reading for all those interested in NT Christology.

Justin K. Hardin is Director of Studies and Tutor in New Testament at Wycliffe College. He has written articles and essays at both the popular and scholarly levels and is author of Galatians and the Imperial Cult (Mohr Siebeck, 2008).