I don’t know if I’ve ever left a book more dog-eared and battered in less time than James K. A. Smith’s Imagining the Kingdom: How Worship Works (Cultural Liturgies). Like his previous work, Desiring the Kingdom, Smith covers an immense amount of territory in an economy of well-written pages. Phenomenology, anthropology, theology, culture, art, poetry, liturgy, literature, Downton Abbey, and David Foster Wallace are all discussed with coherence.

As part of Smith’s “Cultural Liturgies” series, the book continues to develop an understanding of the person that accounts for the way imagination, desire, and story shape one’s way of being-in-the-world. For Smith, this results in a “liturgical anthropology,” a vision of humanity that finds its fullest expression and most powerful formation in worship.

In Desiring the Kingdom, Smith argued that humanity is first and foremost a “desiring” animal. We’re motivated more by love and imagination than intellect. Desire is formed in community through habituated practices and rituals (seen in our “secular” world when going to a movie, a football game, or a mall—actions that take on a habitual, ritualistic shape). These practices frame our understanding of what life’s about and what the “good life” is. So Christians concerned with spiritual formation should be thinking about the historic practices of worship, which are themselves formational habits that honor humanity’s embodied, story-formed, desire-motivated nature. 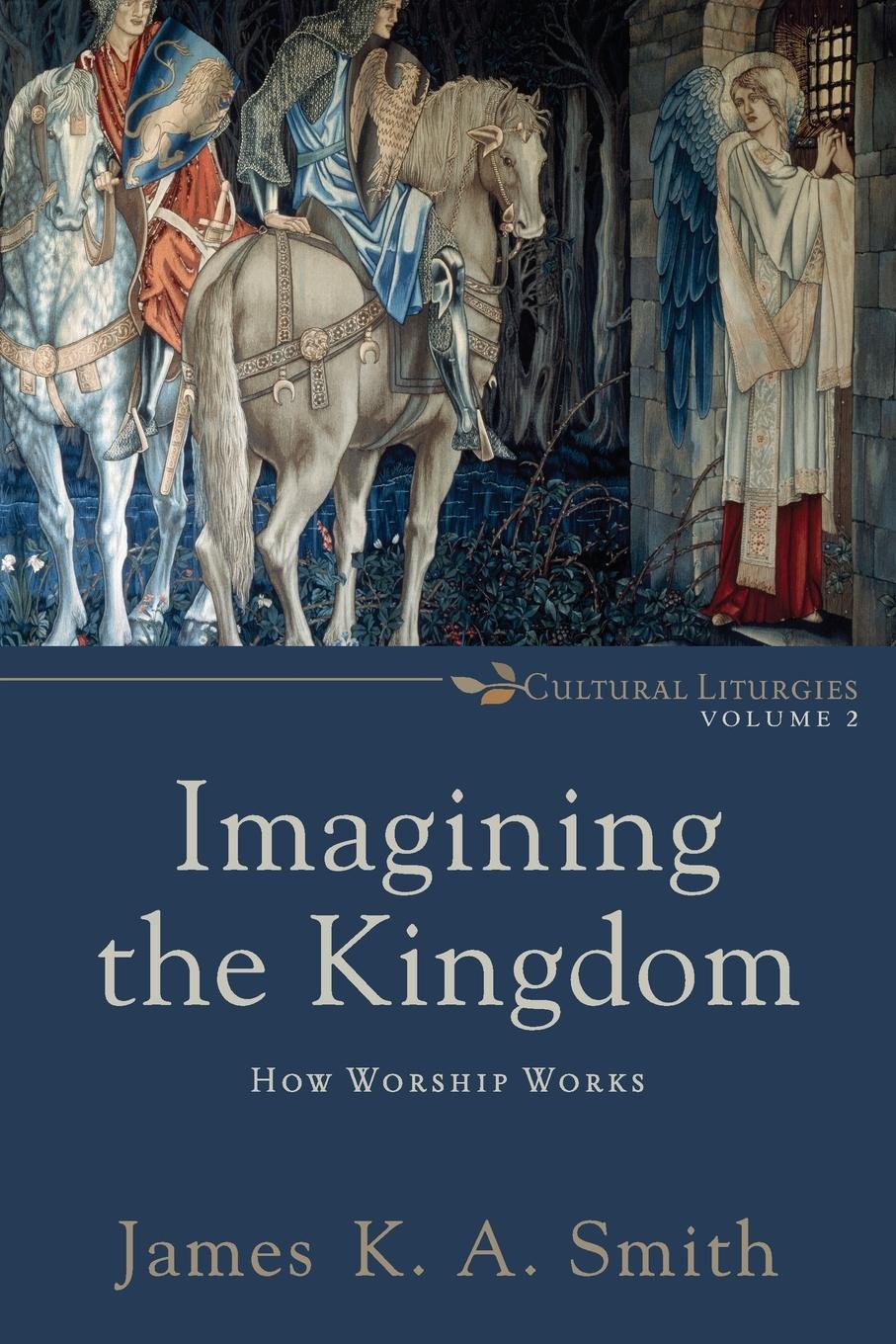 Imagining the Kingdom expands the project by further developing an understanding of our being-in-the-world as embodied, habituated, imagining creatures. In many ways, Smith’s project is a general critique of intellectualist ideas about humanity and a particular critique of discipleship and Christian education models that primarily (or exclusively) target the intellect. “By focusing on what we think and believe,” he contends, “such a model misses the centrality and primacy of what we love; by focusing on education as the dissemination of information, we have missed the ways in which Christian education is really a project of formation” (7).

Smith’s project seeks to offer a broader vision of what motivates human action and help explain both our being-in-the-world and how such being can change. In an intellectualist model, it’s believed that a person can change his life by changing his ideas. We think wrongly about the world, it is supposed, and act wrongly as a result. Smith argues otherwise.

In Section One, Smith suggests we have an embodied way of “knowing” and intuiting our world, an inner posture predisposing us to action. He argues that most of our actions have their origins somewhere between intellect and instinct: that we have a “feel” for and natural disposition to the world that is shaped gradually, slowly, and implicitly from our experiences in the world. This feel is to a great extent “the effect of stories that have captivated us, have sunk into our bones—stories that ‘picture’ what we think life is about, what constitutes ‘the good life.’ We live into the stories we’ve absorbed; we become characters in the drama that has captivated us” (32).

Section Two argues that embodied knowing is formed by shared communal practices and stories. As social creatures, we find ourselves adopting what Smith calls a habitus—a “handed down way of being” shared among a community” (81). Here he leans on the philosophy of Pierre Bourdieu, whose work studying “practice as practice” sought to “recognize the centrality of habitus, of habituated inclinations that spawn meaningful action” (80).

Section Three argues that both our embodied knowing and also our habitus are motivated and formed by our imaginations—by metaphor and narrative. The world as Smith sees it is liturgical; he defines liturgies as:

those rituals and practices that constitute the embodied stories of a body politic. If liturgies are “rituals of ultimate concern” that form identity, that inculcate particular visions of the good life, and that do so in a way that means to trump other formations, they do so because they are those story-laden practices that are absorbed into the imaginative epicenter of action and behavior. (109)

It’s through these liturgies—stories, images, and visions of “the good life”—that our desires are formed and our actions are motivated. These stories capture our imagination and have a way of orienting our lives. “We don’t memorize the Story as told to us,” Smith writes. “We imbibe the Story as we perform it in a million little gestures” (110).

In Section Four, he brings the argument back to worship as the primary engine of spiritual formation. The alternative to these cultural liturgies, Smith believes, is the historic practice of Christian worship. By immersion in the story of the gospel, habituated week after week through worship and liturgy, we replace the “story in our bones” with the story of creation, fall, redemption, and consummation, fundamentally reorienting us to the world. The historic practices of Christian liturgy, with their emphasis on repetition, wholeness, embodied practice, and aesthetics, are designed to address the whole person. We don’t just need to know the right doctrines; we need lives reoriented to the right story.

People so formed by the gospel will naturally begin to see the world and react to it in different ways. They will know themselves as sinners saved by grace, called to extend grace to others. No inner logic needs to be wrangled to reach that conclusion; instead, when they’re sinned against, they intuitively extend mercy. Consider how you react to news. Where tragedy elicits despair, a gospel-formed person might respond— reflexively, without need for an inner dialogue about it—with a deep-seated and wordless, “Come, Lord Jesus.” He might face financial crises with more stability, blessings with greater thankfulness. These would come by reflex, welling up from within as a matter of course—a function of how he’s learned to be in the world.

Early on, in a section titled “How to Read This Book,” Smith says he wants to walk a fine line between the world of academics and the world of practitioners. To be sure, Smith’s book is written for people who want to be challenged. Those who haven’t read much in contemporary philosophy may find Sections One and Two challenging (particularly Smith’s interactions with Bourdieu), but pastors, theologians, and worship leaders alike will be riveted by sections Three and Four (and all the more so if they work through the previous sections). As a pastor of worship and one who enjoys reading philosophy, I absolutely loved this book. Smith profoundly underlines the importance of the practices of the gathered church, while offering salient critiques of much of the contemporization of those practices.

Throughout the book there’s an implicit critique of “de-ritualized, sermon-centric, intellectualist piety” (155), but that argument is far from anti-intellectual. Instead, it seems Smith wants to flesh out a broader anthropology that accounts for the role of the intellect in harmony with the rest of the action-motivating elements of humanity. Just as historic Christian doctrine would have us argue we cannot separate soul from body, Smith wants to argue we cannot separate knowledge from body, and thus our vision for sanctification must include a plan for the transformation of our bodily way of knowing the world.

Two additional reflections stick with me after reading the book.

First, Smith’s understanding of humanity and transformation resonates with contemplative traditions,1 and in contemporary terms, particularly with Dallas Willard.2 I think if you compared the anthropology of Smith’s “Cultural Liturgies” series side-by-side with Willard from Renovation of the Heart, you’d see far more in common than not. Both recognize the need for contemporary Christianity to recover a vision of human being as embodied, and both see desire and imagination as the fuel in the tank of real, deep change.

But where Willard, Richard Foster, and other contemporary contemplatives have focused primarily on individual aspects of formation (personal spiritual disciplines), Smith’s book offers a more historic corrective, recognizing that these disciplines must also be practiced and shared in community.

Second, Smith seems to have a bias toward traditional forms and practices. He offers striking critiques of contemporary worship forms, but I wonder if he could’ve been a bit more nuanced. He expresses concern about new forms in worship (174) and warns about “singing lyrics that confess Jesus is Lord accompanied by a tune that means something very different” (175). Insofar as these concerns call us back to worship explicitly rehearsing the gospel story, I couldn’t agree more. But there’s a difference between compromising and striving for comprehension. After all, the heroes of traditional Christian worship—names like Cranmer, Watts, Wesley, not to mention Calvin and Luther—were worship innovators with pastoral motivations.

What, then, are the non-negotiables of effective, formative Christian worship? What criteria define what’s universal over against what’s contextual? To put it in Smith’s own terms, I wonder whether our habitus should play a part in shaping our worship practices.

I wonder, too, if our response to musical forms isn’t as socially conditioned as our habitus. Smith himself argues it’s evidence of grace that God condescends to meet his embodied creation in embodied way—Word, prayer, bread, wine, and song. Might it be equally argued that God condescends to meet us in conversational language and folk music?3 To be sure, there are clear scriptural priorities for our singing and content, but cultural forms seems to have an elasticity in both Scripture and church history. To what extent can they be redeemed and recruited as part of the rehearsal of the gospel story in the gathered church?

That said, these questions do little to temper my enthusiasm for Imagining the Kingdom. Smith challenges, entertains, and worships in his writing. He leaves the reader with a vision for humanity and worship that is at once humbling and wondrous. We are fearfully and wonderfully made; at times, a mystery even to ourselves. And yet God meets us in the midst of our mess and, by his grace, offers us a changed life by living from a better story.

1 Smith’s engagement with the contemplative tradition is explicit in Section Four, where he interacts with Matthew Myers Boulton’s excellent book, Life in God: John Calvin, Practical Formation, and the Future of Protestant Theology. Boulton’s argues Calvin’s critiques of monasticism weren’t meant to squash the monastic, contemplative vision, but to expand it. Rather than seeing disciplined spiritual formation as the calling of the cloistered few, it’s the calling of the whole city.

2 I wonder how much this has to do with Smith and Willard’s work as philosophers (Willard is a philosopher at USC); both traffic in the world of phenomenology, as do Merleau-Ponty and Bourdieu, who shape much of Smith’s argument in Imagining the Kingdom. Phenomenology seeks to understand the experience of consciousness—that is, subjective, first-person experience of the world.

3 And by folk music, of course, I mean anything on a popular level, including something that might sound like CCM.

Mike Cosper is the founder of Harbor Media in Louisville, Kentucky. He is the author of Faith Among the Faithless: Learning from Esther How to Live in a World Gone Mad (Thomas Nelson, 2018), Recapturing the Wonder: Transcendent Faith in a Disenchanted World​ (IVP Books, 2017), The Stories We Tell: How TV and Movies Long for and Echo the Truth (Crossway, 2014), and Rhythms of Grace: How the Church’s Worship Tells the Story of the Gospel (Crossway, 2013). You can follow him on Twitter.

1 ‘Avatar: The Last Airbender’: Zuko’s Scars and Ours

3 How Progressive Christianity Preaches Another Gospel

4 From Gay to Gospel: The Fascinating Story of Becket Cook

5 4 Things I Want My Daughters to Know

If this argument is sound, it practically precludes a pro-life vote for Joe Biden. We should oppose a legal regime that denies to an entire class of human beings the most basic of human rights, thus exposing them to lethal violence