These are the central questions animating James K. A. Smith’s new book How to Inhabit Time: Understanding the Past, Facing the Future, Living Faithfully Now. Smith aims to deliver Christians from the danger of what he calls “nowhen Christianity” by encouraging the development of the discipline of “spiritual timekeeping.”

Nowhen Christians “imagine themselves wholly governed by timeless principles, unchanging convictions, expressing an idealism that assumes they are wholly governed by eternal ideas untainted by history” (4). Nowhen Christianity defines faithfulness by adherence to an unchanging set of fundamentals. By contrast, spiritual timekeeping “is characterized by a dynamism of keeping time with the Spirit” (19).

Smith sets out to cultivate this dynamism in a series of chapters that combine reflection with philosophy, theology, and poetry and span the various seasons of a mortal life embedded in time. 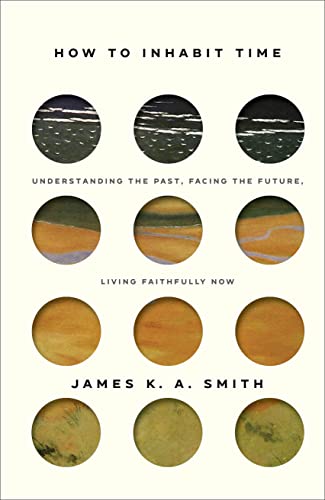 How to Inhabit Time: Understanding the Past, Facing the Future, Living Faithfully Now

How to Inhabit Time: Understanding the Past, Facing the Future, Living Faithfully Now

Many Christians live a faith that is “nowhen.” They are disconnected from the past or imagine they are somehow “above” the flux of history, as if every generation starts with a clean state. They lack an awareness of time and the effects of history—both personal and collective—and thus are naive about current issues, prone to nostalgia, or fixated on the end times and other doomsday versions of the future.

Popular speaker and award-winning author James K. A. Smith explains that we must reckon with the past in order to discern the present and have hope for the future. Integrating popular culture, biblical exposition, and meditation, he helps us develop a sense of “temporal awareness” that is attuned to the texture of history, the vicissitudes of life, and the tempo of the Spirit.

Devoted fans of Smith will find several things to appreciate about this book: his writing is always sharp and thought-provoking, and few authors can as breezily weave together continental philosophy with Scripture and classic rock lyrics with church fathers. He’s even assembled a Spotify playlist to pair with the book as he did for On the Road with Saint Augustine.

Smith also brings new elements to his writing with this offering. It’s more autobiographical than any of his previous books. He has said that How to Inhabit Time is his most personal work, and that shows. We read in these pages not merely Smith the philosopher considering questions of time and mortality but Smith the man grappling with the truth “for which he can live and die” (to borrow a phrase from one of Smith’s favorites, Søren Kierkegaard).

In other words, this book has more poignancy and existential urgency than his earlier writings, and that leads to a more textured and contemplative experience for the reader. I think that was one of Smith’s aims, and he’s succeeded.

Nowhen Christianity defines faithfulness by adherence to an unchanging set of fundamentals. By contrast, spiritual timekeeping ‘is characterized by a dynamism of keeping time with the Spirit.’

Smith’s notion of “spiritual timekeeping” can also serve as a corrective to the excesses of certain features of North American Christianity. He brings a welcome focus on the realities of suffering and mortality without offering pat solutions to them.

He encourages us to receive even the ephemeral goods of creation as a gift, acknowledging both their excellence in the moment and the fact that they’ll ultimately pass away, while rooting our hope in the God who gathers up and restores what is lost. This allows us to sing resurrection songs, even with “voices that crack and break” (109). There’s much wisdom in this approach to time and our own mortality. Something important is lost in a Christianity that fails to practice both “memento mori” and “memento tempori,” and this book is an invitation to practice both.

The main chapters of the book deal with the features and seasons of a life spent developing the discipline of spiritual timekeeping. Smith considers our status as creatures conditioned and affected by time, the sacralization of all time in relation to God’s redemptive acts, love and loss amid times and seasons, and looking forward to the end while remaining present in the now.

The chapters are interspersed with three brief reflections on passages from Ecclesiastes. These meditations are separate from the larger movement of the book but provide a meditative pause between chapters. In the preface, Smith invites his readers, as part of exercising their temporality, to savor the words on the page and revel in the act of reading. These meditations are an excellent place to put that into practice.

Guidance from the Spirit

There’s an area of the book that I think Smith could have made clearer. While he’s often correct about the dangers of nowhen Christianity, the reader can be left wondering whether there are any legitimate sources of timeless principles that might establish boundaries for our discernment of the unfolding of history. Does the Spirit guide the church into new and different truths over time, or does he guide the church in and by the same truths?

Are there any legitimate sources of timeless principles that might establish boundaries for our discernment of the unfolding of history?

On the one hand, Smith affirms we “rightly entrust ourselves to a God who is the same today, yesterday, and forever” (5). But on the other, Smith seems to suggest the Spirit changes when he says that “the Spirit continues to guide and lead into the future, across history, still guiding, convicting, illuminating, and revealing, which is precisely why ongoing reform is necessary” (18) and when he compares the work of the Spirit with Hegel’s “geist,” a spirit that unfolds and comes to understand itself through the process of history (42–44).

I don’t think Smith wants, ultimately, to move away from an orthodox view of the Spirit and of revelation, but there’s room here for greater clarity and emphasis on Scripture as the norming norm that regulates our discernment and reform.

Overall Smith’s project in How to Inhabit Time is an important and valuable one. Christians do need to discern their place in time, and that discernment seems to be at a particularly low ebb in some sectors of the church today. The habits of spiritual timekeeping, properly applied under the guidance of the Word, can shape a life attentive to our status as creatures subject to the changes of time and under the kind providence of a sovereign God. Pastors and other Christians seeking to cultivate such attentiveness in their own lives could benefit from a thoughtful reading of this book.

Ultimately it’s Smith’s hope, as well as my own, that we’ll be able one day to discern the full sweep of time and our place in it, tracing God’s redemptive acts and seeing how he has gathered up all things that are scattered through time. Until that day, let us discern, attend, and hope.

Tom Holsteen (MDiv, Samford University) is a PhD student and instructional designer at the Southern Baptist Theological Seminary who lives in Louisville, Kentucky.