Decades ago I was unfortunate and reckless enough to go spelunking on what the National Park Service called “The Wild Cave Tour” in Mammoth Cave (Kentucky), the world’s largest cave system. I crawled, twisted, and sloshed my way behind an impressively knowledgeable guide as we worked our way through barely accessible sections of the cave on a grueling eight-hour expedition. Pointing out rock formations, old saltpeter mines, evidence of seismic activity, and even ancient inhabitants, he showed me things I hadn’t seen or even known of before.

The defining moment, however, was at the end of the trek. We wriggled our way through a hole only 23 inches in diameter to emerge in an exquisitely colored cavern, a destination that made the punishing trip worth the effort. I felt even better when I learned that, from there, we could walk a short distance to the mouth of the cave and step into the warm afternoon sun.

Reading Robert Alter’s magisterial The Hebrew Bible: A Translation with Commentary gave me that same sense of wonder and learning about many things I hadn’t noticed before. Unlike my never-repeated subterranean excursion, I hope to have Alter guide me on this odyssey again and again. I find this work engaging and enlightening to such a degree that I can’t imagine ever studying an Old Testament passage without at least consulting it. It’s destined to become a standard.

The few translations done by a solo translator have all the strengths and weaknesses one might expect. They each reflect the vision, knowledge, presuppositions, and translation proclivities of an individual without the perspectives and deliberation that usually attend the work of a committee.

I find this work engaging and enlightening to such a degree that I can’t imagine ever studying an Old Testament passage without at least consulting it.

Additionally, they typically manifest some theological or textual conviction of the translator. George Lamsa, for instance, believed the Syria Peshitta to be more reliable than the Masoretic text, and his Lamsa’s Bible (1933) is based almost entirely on it. Conversely, the compromises and concessions made in a room full of opinionated scholars can dull the sharp linguistic edges and idiosyncrasies of the biblical author.

While Alter has his own eccentricities, he is candid with the reader when his translation is “somewhat speculative” or even contains “guesses and approximations.” He invites the reader not only to look over his shoulder, but even directly into his mind, and this is unique in a translation of the entire Hebrew Bible. 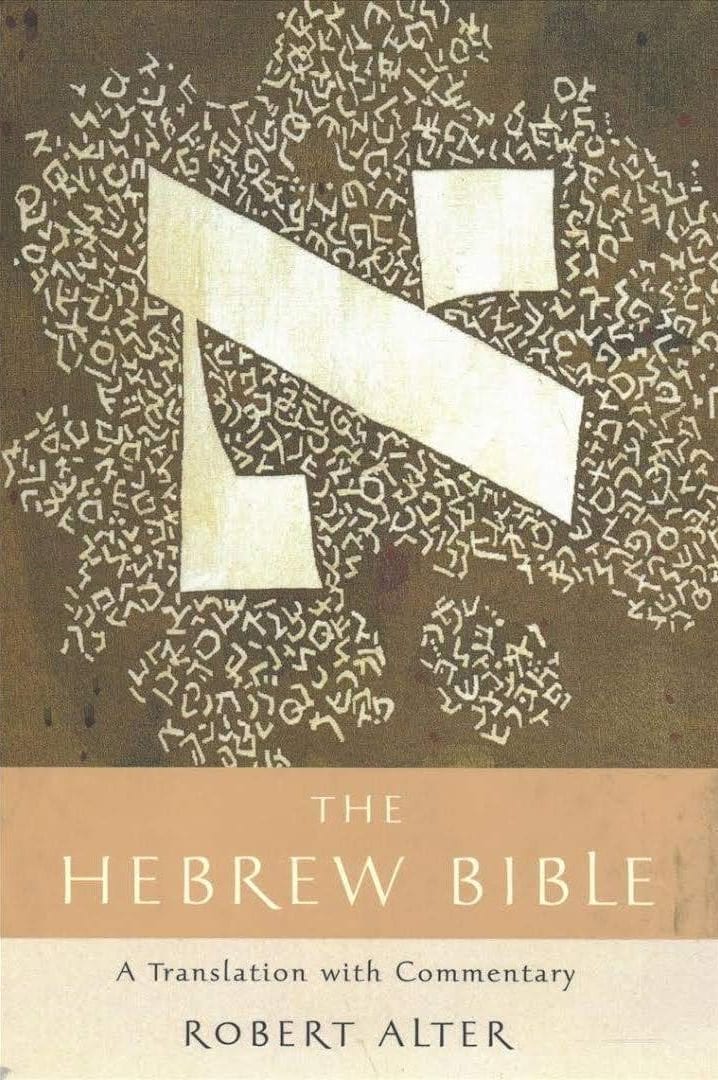 The Hebrew Bible: A Translation with Commentary

The Hebrew Bible: A Translation with Commentary

If any scholar has been adequately prepared for the task of singlehandedly translating the entire Hebrew Bible into accessible English, Robert Alter is the one. His seminal work, The Art of Biblical Narrative, as well as The Art of Biblical Poetry and his subsequent translations of sections of the Hebrew Bible (The Book of Psalms, Wisdom Books, and The Five Books of Moses), have long been considered indispensable to many students of the English Bible.

Amazingly, Alter didn’t arrive at his expertise by the usual route. He holds a PhD in comparative literature, having studied with Lionel Trilling as an undergraduate at Columbia before completing his doctorate at Harvard. At 83, he still serves as the Emeritus Class of 1937 Professor of Hebrew and Comparative Literature at the University of California, Berkeley.

As a young American Jewish boy compelled to study Hebrew, Alter became enamored with the language and learned every word in a Hebrew-Hebrew dictionary, figuring that “if I could get everything in that book into my head, I’d have it.” Ever acquiring more knowledge of the language and then combining that with a careful literary reading of the Hebrew Bible, Alter began to rebel against the destructive forms of criticism that saw the biblical text as little more than a thoughtlessly compiled scrapbook in which tensions and apparent contradictions slipped past obtuse or oblivious redactors. He dared suggest that the authors and editors of the Hebrew Bible were intentional in the details and that the reader should see instead a “composite artistry” in the juxtaposition of differing details or narratives.

In his 1968 presidential address to the Society of Biblical Literature, James Muilenberg pleaded with scholars to go beyond form criticism, with its emphasis on the supposed history “behind” the text, and to work with and understand the text as we have it. “It is the creative synthesis of the particular formulation of the pericope with the content,” he observed, “that makes it the distinctive composition it is.” In that same spirit and concern, Alter doesn’t preoccupy himself or his reader with modern source criticism. Though he accepts many of its assumptions, he doesn’t seem interested in it. Alter deals with the text as it is rather than as it was or might’ve been. He writes:

I am deeply convinced that conventional biblical scholarship has been trigger-happy in using the arsenal of text-critical categories, proclaiming contradiction wherever there is the slightest tension in the text, seeing every repetition as evidence of a duplication of sources, everywhere tuning in to the static of transmission, not to the complex music of the redacted story. (5)

These views have earned him the reputation of being subversive to the critical establishment in both academia and also the world of religion.

The result of Alter’s self-imposed Sinaitic confines is a translation both literal and literary, original but faithful. Though accessible to contemporary English readers, it retains the diction and rhythm of the underlying Hebrew, refusing to make the rough places plain with linguistic botox.

Though accessible to contemporary English readers, it retains the diction and rhythm of the underlying Hebrew, refusing to make the rough places plain with linguistic botox.

I spent the last week of December and the first week of January reading through Alter’s translation in great detail. I hardly think I could’ve chosen a better beginning to the new year. My wife enjoyed the excitement with which I would share insights I learned or some literary device I saw for the first time. I readily agreed with Alter’s disdain for what he calls “the heresy of interpretation”—the tendency of translators to use translation “as a vehicle for explaining the Bible instead of representing it in another language.” I wholeheartedly agree that “in the most egregious instances this amounts to explaining away the Bible” (xv).

Alter’s translation, however, is only half of the treasure in this work. His commentary is rich with attention to nuance, structure, and literary devices that often get lost in English translation. An added bonus is his economic use of words. He exposes the jewel of the text to the reader with little self-conscious description of how he mined it from the ore. In his notes on the story of Joseph and Potiphar’s wife in Genesis 39, for instance, he elucidates:

This chapter is the most elegantly symmetrical episode in Genesis. It comprises an introductory narrative frame (verses 1–6), a closing frame (20–23) that elaborately echoes the introductory verses, and the central story of the failed seduction, which is intricately linked to the framing verses by a network of recurring thematic key words. . . . The thematic key words, emphatically repeated in phrase after phrase are: “all,” “hand,” “house,” “blessing,” “succeed”—the last two terms being the manifestation of the reiterated “the Lord was with Joseph.”

This exposure of the structure, of how the author achieves his intended effect, is what Alter does over and over. His commentary often reveals the beauty that lies beneath the surface, not truly hidden but also not obvious. In fact, the measure of Alter’s triumph in these volumes is that his textual commentary points out the observable and apparent features of the passage in such an accessible manner that the reader responds with a “Yes, I see that!” instead of “I’m glad I have an expert to tell me this, because I could never otherwise know it.” His translation is the work of an accomplished scholar, but his commentary is the reflection of a careful reader that he delights to share. His knowledge of Hebrew is his own, but his understanding of the text is a communicable attribute.

Benefiting from a Non-Christian Translation?

I admit a feeling of unease that someone who doesn’t profess to be a Christian could feed my soul so sumptuously. How can I revel in this scholar’s translation of the Hebrew Bible when his commentary is devoid of the Christ to whom I know it points? I came to realize, however, that this paradox is itself a testimony to the power of Scripture. The Word of God is so powerful that Jesus can’t be eclipsed in any honest translation, even when the translator doesn’t consciously see him.

The Word of God is so powerful that Jesus can’t be eclipsed in any honest translation, even when the translator doesn’t consciously see him.

These famous words are the ones pronounced by Jesus in his last agony—though in Aramaic, not in the original Hebrew. That moment in Matthew is a kind of pesher, or fulfillment interpretation, of this psalm, because there are other details here (for example, verses 16–19) that could be connected with the crucifixion. (68)

Similarly, his translation of Isaiah 53:3 reads, “Despised and shunned by people, a man of sorrows and visited by illness. And like one from whom the gaze is averted, despised, and we reckoned him naught.” His subsequent commentary is:

Famously, these words and what follows were embraced by Christian interpreters from the formative period of Christianity onward as a prophecy of the Passion narrative and the Crucifixion. The emphasis on the Servant’s bearing the sins of the people and becoming a kind of sacrificial lamb seemed especially relevant to the idea of Christ’s dying for the sins of humankind. Illness, however, is not part of the story of Jesus. Virtually no serious scholars today see this as a prediction of the Passion, but it certainly provided a theological template for interpreting the death of Jesus. (801)

Alter respectfully acknowledges the Christian reading of the Hebrew Bible even though he doesn’t share it. He has no ax to grind when he disagrees, so Christian readers aren’t forced into an imaginary contentious debate as they read. To the contrary, Alter’s reliable translation and lucid commentary often undergird a Christocentric reading of the text. A Christian will know what kind of illness Jesus was acquainted with.

In taking the journey though the Hebrew Bible with Robert Alter, I know I’m led by a skillful, experienced guide who expertly points out the structures, the flow, the literary and compositional seams that deepen my understanding and increase my appreciation of Scripture. I’m glad to follow him on this journey. But in the end, after enjoying such exquisite attention to detail beneath the surface, I walk alone into the warm sunshine of its fulfillment in Christ.

​Hershael York is dean of the school of theology and professor of Christian preaching at The Southern Baptist Theological Seminary. He’s also pastor of the Buck Run Baptist Church in Frankfort, Kentucky.