Daniel Timmer, associate professor of Old Testament at Reformed Theological Seminary (Jackson), is a rising scholar in biblical studies. In addition to his doctoral dissertation (Creation, Tabernacle and Sabbath: The Sabbath Frame of Exodus 31:12–17; 35:1–3 in Exegetical and Theological Perspective), he has already published articles in several of the best exegetical reviews. The book of Jonah, especially in relation to mission, has attracted his attention for several years, as it appears in several previous works, including an article on the “post-colonial significance” of this book’s contexts in Journal of Hebrew Scriptures.

The present work, A Gracious and Compassionate God: Mission, Salvation and Spirituality in the Book of Jonah, investigates the book of Jonah with special attention to three themes of the utmost importance in the Bible: mission, salvation and spirituality. It does so in a canonical perspective that allows the author to shed light on Jonah from the rest of the Bible. Reciprocally, it enables him to highlight the contribution of this “minor prophet” to progressive revelation (“within the context of the OT, the book of Jonah sounded an early note of change regarding Israel’s missionary attitudes and practices”, 46–47).

Several special features of this remarkable book should be highlighted. First, the discussions are solidly grounded in a Christian reading of Jonah, respectful of the inspired text and attentive to its original context as well as to its own nuances, while not being timid when it becomes helpful to enlarge the vision and consider the rest of the Bible. He successfully underscores the flaws in the spirituality of Jonah, and offers a pertinent discussion of what this biblical book has to teach us about the issues of conversion and mission. Step by step, he asks the relevant questions to the biblical text and his analyses go to the point while at the same time paying attention to the subtlety of the narrative. 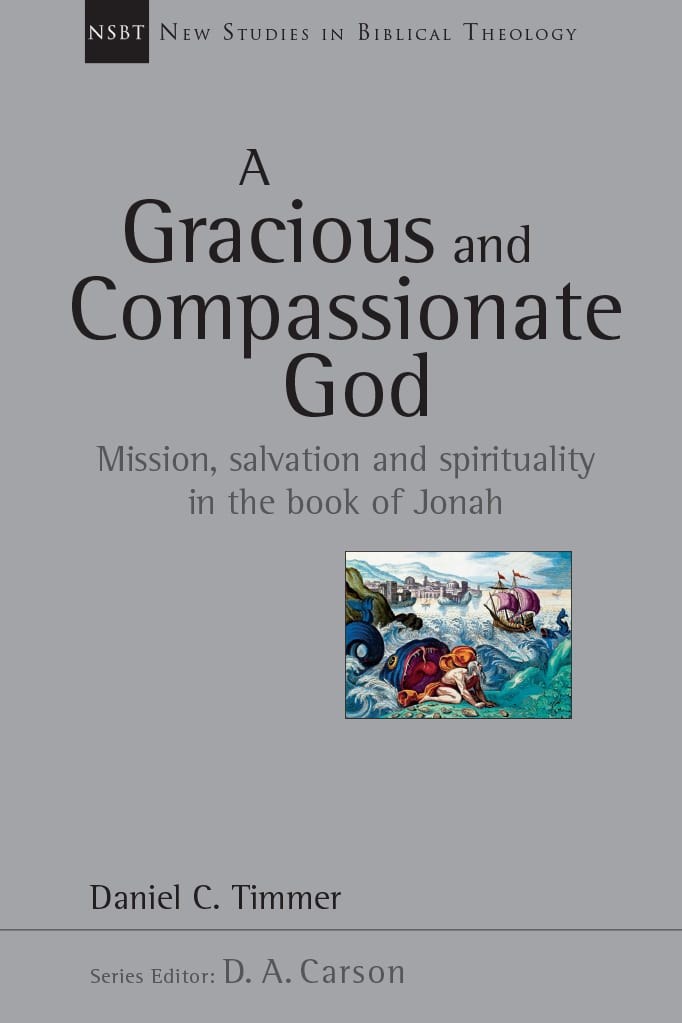 A Gracious and Compassionate God: Mission, Salvation and Spirituality in the Book of Jonah

A Gracious and Compassionate God: Mission, Salvation and Spirituality in the Book of Jonah

The book of Jonah is arguably just as jarring for us as it was for the ancients. Ninevah’s repentance, Jonah’s estrangement from God and the book’s bracing moral conclusion all pose unsettling questions for today’s readers. For biblical theologians, Jonah also raises tough questions regarding mission and religious conversion. Here, Daniel Timmer embarks on a new reading of Jonah in order to secure its ongoing relevance for biblical theology. After an examination of the book’s historical backgrounds (in both Israel and Assyria), Timmer discusses the biblical text in detail, paying special attention to redemptive history and its Christocentric orientation.

Secondly, Timmer courageously endorses a historical reading of Jonah. More than that, he is certainly one of the exegetes who has pushed its consequences the furthest. All through the book, he explains what in the history and practices of the Neo-Assyrian Empire could shed light on details in Jonah. For instance, regarding the decree of the king of Nineveh, he quotes a royal decree summoning all the people of the land to mourn, pray and repent before the god Adad (106). At the same time, he avoids the temptation, frequent in comparative studies, to draw parallels too easily with oriental texts: after a careful discussion, he considers it unlikely that the author of Jonah alluded to the Sumerian myth called “The Descent of Inanna” (78–80). Obviously, what will be regarded as a strength by many conservative evangelicals will also appear as a weakness for people who believe that Jonah is a book intended to be read as a fiction. Yet this should not prevent them reading the book, since they might admit that this essay sheds light on the period which is referred to in the book as the background for the narrative, and in any event because this study addresses many other matters.

Third—while this is in fact the first thing that struck me when opening this book, in the most positive sense—Timmer has extensively consulted the most relevant literature about Jonah and its context. It is not rare to see authors that, because the book they are writing is devoted to biblical theology, are content with a limited use of, and interaction with secondary literature. As a corollary, while having written a readable main text, in a concise and efficient style, Timmer has provided much food for thought in the footnotes which contain a large amount of interaction with other exegetes. So in my opinion, this book will be useful in two different ways: first, as an excellent reading on Jonah; second, as a set of tracks for further reading and reflection on a multiplicity of subjects.

Of course, I am not pretending that this work is perfect, and the book of Jonah could give rise to long discussions, but in view of the quality of this essay I would have only here a few and unimportant questions. With regard to the historical context, the author insists more on the history of the Neo-Assyrian Empire than on what we know about Israel at that time—but this is perhaps due to the concern of giving to the reader the information he is the less likely to already have. Since it might have provided a wider context for Jonah’s attitude, it could have been useful to say a little more on what transpires from the book of Amos about the nationalistic pride of the elites in the Northern Kingdom, though it is admittedly indirect.

More to the point, I imagine that one issue in particular might give rise to disagreement among some readers: the difficult question of the extent of the sailors and the Ninevites’s repentance. Some might refuse to speak of “conversion” to Yahweh for the former, or might be inclined to use this term about the latter. This will depend on what they read into the expressions “to fear God”, “to believe in God” and “to repent.” In any event, it will not be the least merit of Timmer’s logical and thorough analyses to stimulate their exegesis, since he provides a solid and detailed argumentation.

Finally, I highly recommend this work to students, pastors and scholars interested in Old Testament theology and especially in the three themes addressed here (mission, salvation and spirituality). I hope, and I have little doubt that it will deservedly find a place on the shelf of many preachers as “the” classic to have on Jonah among the evangelical resources. This is typically the sort of book you read with a pen at hand, underlining many passages that urge you to preach a series on the biblical book in question. Which is always a good sign.

Matthieu Richelle (PhD, EPHE, Sorbonne) is professor of Old Testament at the Faculté de théologie évangélique in Vaux-sur-Seine, France, and has written Le testament d’Elisée. He is married to Sarah, who works as pastoral assistant at the Tabernacle Baptist Church, Paris. He blogs at Exegetix on the Old Testament and at Matthieu Richelle.