Are evangelicals being distracted by mission creep? That is, are we allowing lots of other good things to creep in and crowd out the central task Jesus sends the church into the world to do?

On the one hand, the rising groundswell of interest in social and cultural engagement among many evangelicals likely reflects the flowering of a robust biblical view of creation and the Bible’s command to love our neighbor. And many Christians are engaging these issues in a way that keeps the message of the gospel front and center in their lives and in the lives of local churches. On the other hand, many voices insist that if the church as church is not engaging (insert favored social problem or cultural activity here), then it’s not fulfilling its mission. Such critics assert that evangelical churches are too preoccupied with “member maintenance” to pay attention to the real mission of Jesus among the poor, in the inner cities, and in the places where culture is made.

A whole lot of theological issues are wrapped up in this concern: the definition of the gospel; the distinction between the church as a “gathered” institution and the church as a “scattered” organism; the nature of the inaugurated kingdom of God and its implications for the present age; and, not least, the contours and scope of the mission Jesus gives to his church.

An Expansive Theological Exposition of the Great Commission

Driven by the concern that evangelicals are in fact being distracted by mission creep, Westminster California theologian Michael Horton has addressed these issues and more in his new book, The Gospel Commission: Recovering God’s Strategy for Making Disciples . At its heart, this book is an expansive theological exposition of the “Great Commission” of Matthew 28:18–20. Along the way, in addition to the issues mentioned above, Horton engages with cultural pluralism, theological inclusivism, and a number of influential facets of evangelical piety and practice that he finds to be troublesome.

Horton’s thesis is summed up in one sentence early on: “The central point of this book is that there is no mission without the church and no church without the mission” (14). Over against those who would denigrate the church’s regular ministry of “Word and sacrament” as a hindrance to mission or as an irrelevant sideshow, Horton argues that the church’s regular means of grace are at the very heart of Jesus’ missional mandate. Therefore, the church is a missionary institution by nature and calling.

A Radically Church-Shaped Vision for Disciple-Making

In other words, Horton argues for a radically church-shaped vision for disciple-making. In my estimation, this is a timely, biblical corrective to evangelicals’ general neglect of the institutional church and to the particular way that recent “missional” emphases have sometimes tended to denigrate the institutional church’s ministry. This church-shaped vision comes to fruition in chapters six and seven, in which Horton unpacks how the church’s ministry of preaching, teaching, administering the sacraments, and practicing discipline fulfills Christ’s mandate to make disciples of all nations.

Further, Horton’s view of the church’s mission is grounded on a lush depiction of the Bible’s teaching on the kingdom of God. In chapter two, “Exodus and Conquest: The Gospel and the Kingdom,” Horton expounds the gospel as the eschatological exodus and conquest that secures our salvation and brings the age to come crashing into the present, opening up a “crevice” between the ages in which the gospel is proclaimed to all nations.

Thus, this book contains Horton’s answer to current debates about the relationship between gospel and kingdom, and it’s a compelling one. Building upon careful exegetical and biblical-theological work, Horton argues that “Jesus’s proclamation of the kingdom is identical to Paul’s proclamation of the gospel of justification” (75). Further, “The kingdom of God in this present phase is primarily audible, not visible. We hear the opening and shutting of the kingdom’s gates through the proclamation of the gospel, in the sacraments, and in discipline” (67). In the same vein, “Only if we hold in slight esteem the forgiveness of sins, rebirth into the new creation, justification, sanctification, and the communion of saints can we fail to revel in these present realities of Christ’s reign” (68). 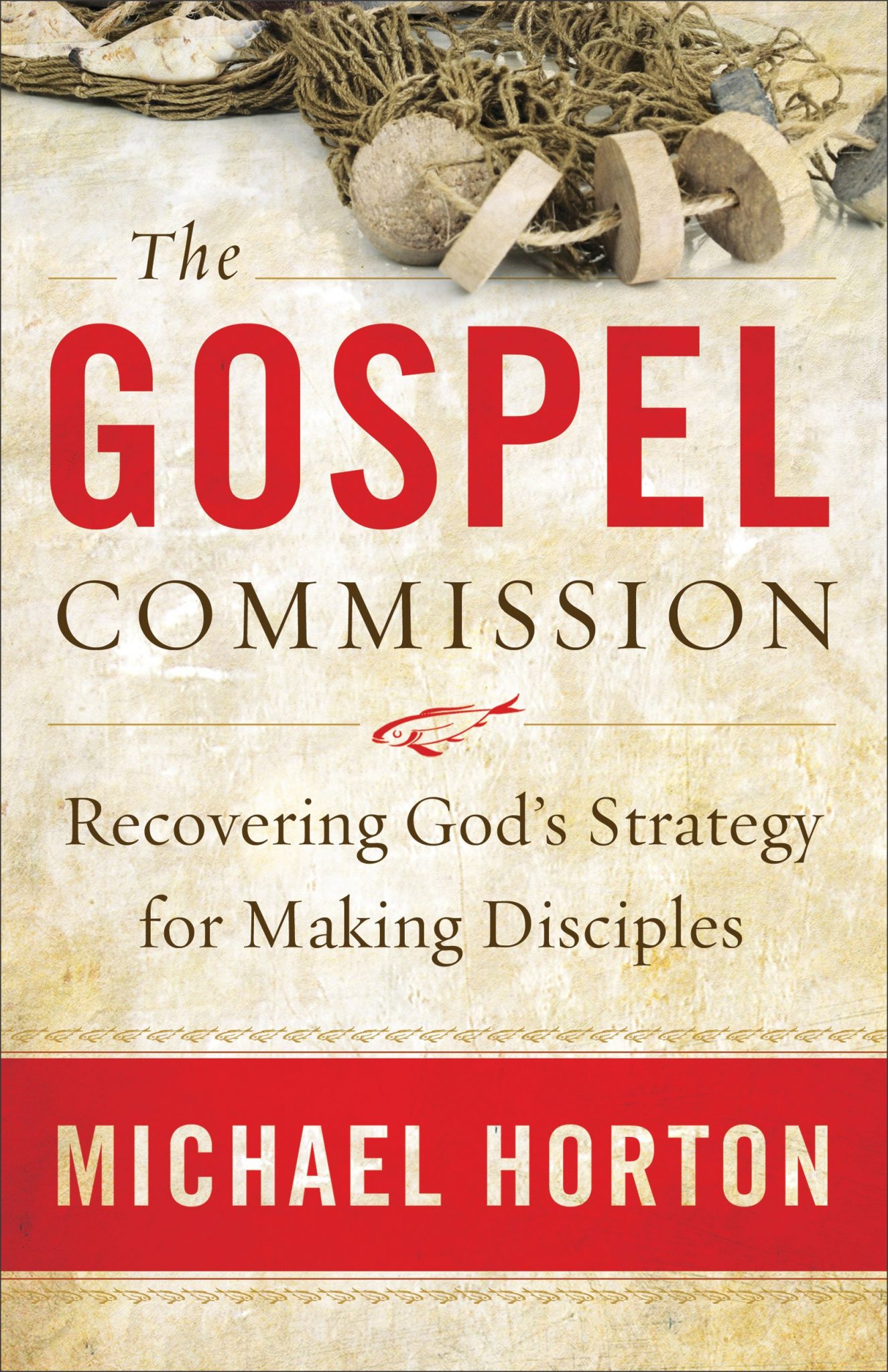 Many churches in America today want to be powerful, relevant, and influential in personal and social transformation. But whose kingdom are we building? God’s? Or our own?

But Michael Horton contends that it too often becomes our mission instead of God’s. At a time when churches are zealously engaged in writing up mission statements and strategic plans, he argues that we must ask ourselves anew whether we are ambassadors, following the script we’ve been given, or building our own kingdoms with our own blueprint.

Building on this work, in chapter eight Horton has a clarifying and, I would argue, largely satisfying discussion of the relationship between “the Great Commission and the Great Commandment”—that is, the relationship between evangelism and social justice. Horton proposes that the way to fulfill both mandates is for the church as an institution to devote itself to proclaiming the gospel and making disciples, which equips individual Christians to fulfill both commissions in their “myriad callings in the world” (231). Then, in chapter nine, Horton addresses the touchy issue of mission creep, analyzing several “dichotomies that distort the Great Commission and distract us from the strategies that Christ gave us” (252 ff.). Similar to his Westminster California colleague David VanDrunen’s work in his recent book Living in God’s Two Kingdoms (Crossway, 2010), Horton carefully argues for the unique, biblically circumscribed role of the local church as an institution. This is a crucial theological guardrail for preserving the church’s faithfulness to our Master’s marching orders.

A Valuable, Substantive, and Clarifying Contribution

I’ve spent most of my time letting Horton do the talking because I think that this book makes a valuable, substantive, and clarifying contribution to the current evangelical discussion about mission, and I want his arguments to be heard.

Horton’s theological work on gospel and kingdom is clarifying and pointedly edifying. Moreover, he glories in the inauguration of the kingdom of God and the hope of the restoration of all things while carefully guarding against an over-realized eschatology. His massive emphasis on the centrality of the institutional church in fulfilling the Great Commission is a much-needed rallying cry. He muscles out room for the church as institution and then points out that this is how we must fulfill the Great Commission because this-the local church-is the means Jesus established for carrying out his mission on earth. And Horton carefully deprograms several common misconceptions that keep evangelicals from rightly understanding and carrying out the Great Commission. Among these are a consumeristic understanding of contextualization (114–132), the idea that we “live the gospel” (266–285), the claim that the institutional dimensions of the church are inimical to mission (285–290), and a misconstrual of the relationship between the church and the kingdom (290–293).

I have to register a few representative disagreements for the sake of conscience, but these by no means vitiate the book’s value. At times, Horton’s claims about what is representatively “evangelical” strike me as somewhat tendentious. I was not persuaded by his polemic for infant baptism. I don’t think he gets the Sabbath and the Lord’s Day quite right. And I’d raise questions about some of his language about the sacraments.

But in all of this, I appreciate that Horton is fleshing out a biblical vision for mission in the muscles and ligaments of the institutional church. Horton is dead right that the local church is at the heart of the Great Commission, and that the Great Commission provides us with “the message, mandate, and methods that Christ has ordained for his continuing mission in the world” (20). I hope that Horton’s example of displaying this churchly vision for mission within his own convictional and confessional framework will inspire many evangelicals to do the same.

This book is theologically rich and carefully critical. It throbs with a missionary heartbeat. Reading it will both instruct and inspire you to go and make disciples of all nations.

Bobby Jamieson is an associate pastor of Capitol Hill Baptist Church in Washington, D.C. He is the author, most recently, of The Paradox of Sonship: Christology in the Epistle to the Hebrews (IVP Academic, 2021) and The Path to Being a Pastor: A Guide for the Aspiring (Crossway, 2021).