After giving a paper about free will at a professional philosophy conference, I was surprised by a questioner asking: “When you say ‘I love you’ to your wife, what does that mean to her?” Given my Calvinist view of free will according to which God sovereignly determines everything that comes to pass, the questioner felt I couldn’t rescue any meaning in human love relationships.

I quipped that as a Frenchman I could find romance in anything, and that with my view, I could tell my wife she was literally my destiny (I should have added, irresistible!). The audience laughed, but it’s a serious philosophical question with practical ramifications: how does one’s view of free will affect how we see human love? Does God make us love him and love one another? 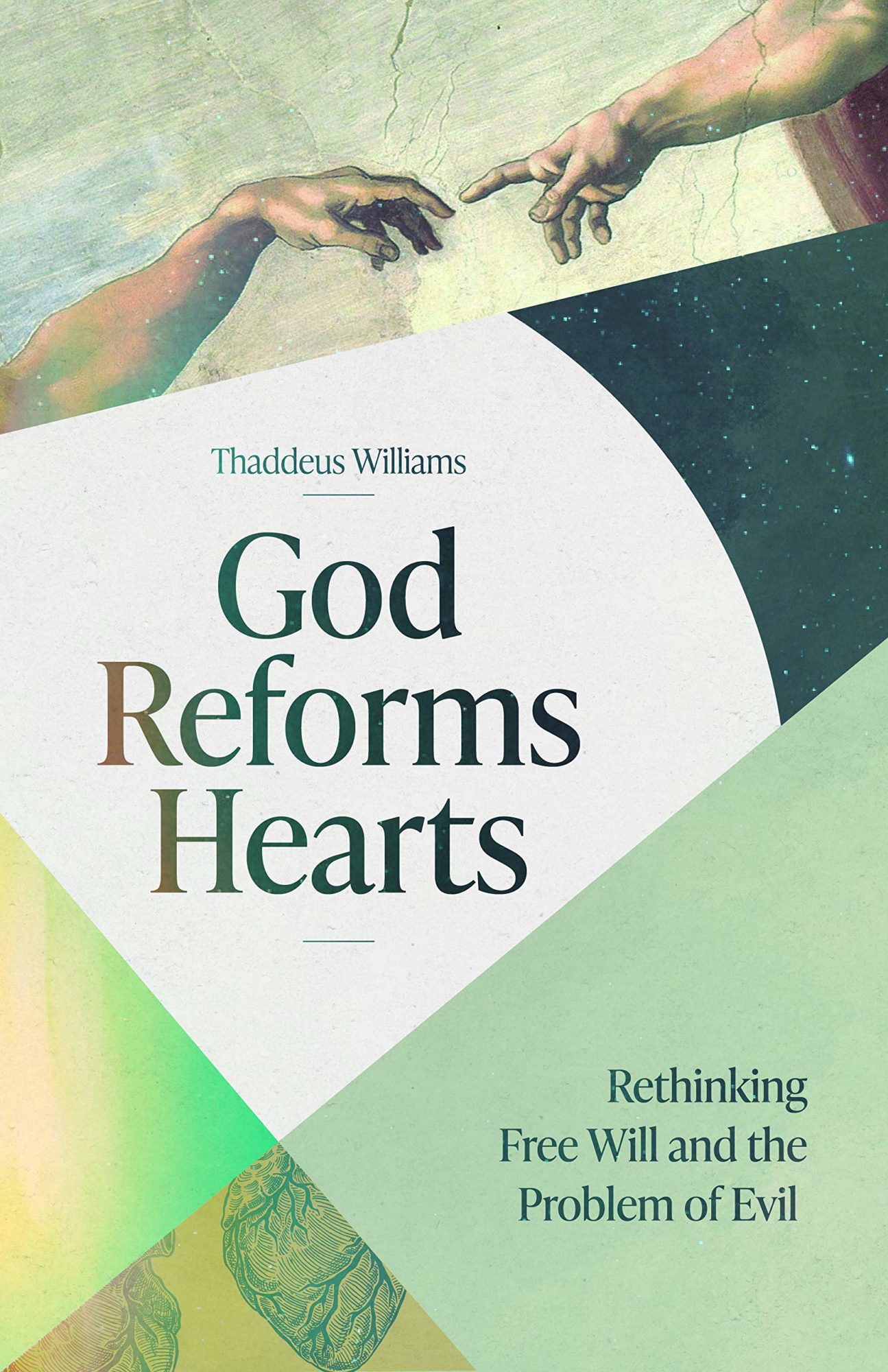 God Reforms Hearts: Rethinking Free Will and the Problem of Evil

God Reforms Hearts: Rethinking Free Will and the Problem of Evil

Evil is a problem for all Christians. When responding to objections that both evil and God can exist, many resort to a “free will defense,” where God is not the creator of evil but of human freedom, by which evil is possible. This response is so pervasive that it is just as often assumed as it is defended. But is this answer biblically and philosophically defensible?

In God Reforms Hearts, Thaddeus J. Williams offers a friendly challenge to the central claim of the free will defense—that love is possible only with true (or libertarian) free will. Williams argues that much thinking on free will fails to carve out the necessary distinction between an autonomous will and an unforced will. Scripture presents a God who desires relationship and places moral requirements on his often-rebellious creatures, but does absolute free will follow? Moreover, God’s reforming work on the human heart goes further than libertarian free will would allow.

With clarity, precision, and charity, Williams judges the merits and shortcomings of the relational free will defense while offering a philosophically and biblically robust alternative that draws from theologians of the past to point a way forward.

In trying to explain how an all-good, all-powerful God could exist while there is so much evil in the world, many Christian philosophers have suggested human free will is one important answer. It’s argued that God has given humans free will and doesn’t determine the outcome of their free choices, which unfortunately means that humans will at times misuse that gift, with all kinds of evil resulting from their bad choices.

On that view of the human will, which is called “libertarian” free will, our choices are not determined by God, and it would be a contradiction in terms for God to make us freely do anything, much less make us freely love him.

Thaddeus Williams disagrees. In his book God Reforms Hearts: Rethinking Free Will and the Problem of Evil, he reexamines the place that libertarian free will has taken in Christian responses to the problem of evil, and more particularly whether authentic human love requires libertarian free will. Williams, an associate professor of systematic theology at Biola University, doesn’t merely suggest that libertarian free will is uncalled for, he argues that it’s outright incompatible with true love and much of the biblical data. In its place, Williams commends the so-called “compatibilist” view of free will, according to which human free choices are compatible with their being determined by God. In this view, typically affirmed in the Reformed or Calvinist tradition, it truly is God who “reforms hearts” and thereby makes us freely love him and love our neighbor as ourselves (55).

It truly is God who ‘reforms hearts’ and thereby makes us freely love him and love our neighbor as ourselves.

The book, organized into three parts, consists of one long and sustained argument against libertarian free will as a good answer to the problem of evil.

The biblical and philosophical bi-disciplinary approach gives this book an interesting angle: it contains more biblical exegesis than you’d expect from a philosopher and more logical argumentation than you’d expect from a biblical theologian. Williams goes deep into the biblical text which he handles carefully (complete with reference to the original languages), including a nice study of human ability in the Gospel of John and a mini biblical theology of divine intervention in human hearts. He interacts with libertarian theologians (like Boyd, Geisler, and Marshall) and yet is also conversant with some of the important libertarian Christian philosophers (like Plantinga, van Inwagen, and Hasker).

The main focus of Williams’s argument is the place of free will in genuine human love, but it maps closely onto the debates on free will as a condition for moral responsibility. Therefore, many of the arguments that bear on the matter of love are the usual suspects in debates on free will and moral responsibility: we find coercion cases, manipulation cases, the maxim that “ought implies can,” and discussion of whether indeterminism would make human choices arbitrary or improperly grounded in human desires.

While Williams offers some of the traditional compatibilist arguments and counterarguments, he often offers his own unique wording of the issues. There’s a risk that the reader may at times be put off by non-standard terminology, but, on the upside, Williams’s new wording is often clever and colorful, and may invite libertarians to engage with his fresh formulation of the issues.

For example, I enjoyed his description of five increasing degrees of divine intervention in human hearts: heart persuasion, heart cooperation, heart activation, heart reformation, and heart circumvention (138). Williams argued we need to reject the fifth but affirm nothing short of the first four. It will be interesting to see if libertarians agree with his categories, and if so, what exit they take from this “highway” of divine intervention. And do they accept the problems Williams lays out for those who wish to exit “too early” (139–144)?

Divine Free Will and Positive Theodicy

I am mostly sympathetic to the book’s thesis and many of its supporting arguments, so let me just mention two potential shortcomings or elements readers may wish had been included.

The first is a question that many libertarians will no doubt raise and should be addressed. When facing conceptual arguments against libertarian free will like some of those Williams offers—claims that it makes choices arbitrary or meaningless because one needs to “transcend” one’s own self (41), or act “against one’s desires,” or with a “liberty of indifference” (50–59) or with a “freedom from” one’s own heart (34–37)—libertarians often punt back to God and say: “at least God isn’t determined, he has libertarian free will, so that shows that there’s no conceptual problem with libertarian free will in itself, and it’s just a debate on whether humans have it too.”

This is a fair retort, and applies equally to the question of authentic love: does God love us authentically? But isn’t God’s free will libertarian? And if it is, does this invalidate conceptual arguments against human libertarian free will? And if God doesn’t have libertarian free will, does this entail the so-called “modal collapse” where every truth is necessary and there is only one possible world? And would that modal collapse be a problem?

Compatibilists who use the conceptual arguments against libertarianism (arguments which I myself find generally plausible) would do well to provide elements of answers to these questions.

And finally, I may point out that the book doesn’t really offer an actual theodicy in response to the problem of evil. Williams’s goal was to “make progress against the problem of evil” (27), but his project is more a pushback on the wrong answer (libertarian free will) than a proposal of the right answer (like a “greater good theodicy,” “soul-making theodicy,” “evil as God’s megaphone” à la C. S. Lewis, or other positive theodicies) to respond to the skeptic.

In the final chapter, Williams does offer a practical application of his positive claim that God reforms hearts and secures human love: when humans are facing moral evil in the real world, they are called upon to pray that God would do exactly what Williams says he does: change hearts.

When humans are facing moral evil in the real world, they are called upon to pray that God would change hearts.

To the Glory of God

God Reforms Hearts is a serious, academic-level treatment of the topic of free will and its role in love relationships, with a focus on divine involvement in human hearts. While not written at the popular level, the careful lay reader will benefit from it, and proponents (and detractors) of libertarianism will be challenged to think deeply about the place of free will in their response to the problem of evil.

It’s a nice complement to recent philosophically robust treatments of free will and evil from a Calvinist perspective like Greg Welty’s Why Is There Evil in the World (and So Much of It)? (Christian Focus, 2018), and the multi-author volume Calvinism and the Problem of Evil (Pickwick, 2016). As a Calvinist myself, I rejoice to see another philosophically-informed theological determinist, especially one who teaches at Biola University, a traditional fortress of libertarianism!

Let Williams’s voice be heard, and the Reformed view of free will embraced to the glory of God who indeed sovereignly reforms our hearts.

Guillaume Bignon is the author of Excusing Sinners and Blaming God (Pickwick, 2018), and Confessions of a French Atheist (Tyndale, 2022).